Though red wolves were declared extinct in the wild by 1980, a team of biologists has found their DNA in a group of canines living on Galveston Island off the coast of Texas.

“This is a remarkable finding, as red wolves were declared extinct in this region over 35 years ago and remain critically endangered,” said Elizabeth Heppenheimer, a graduate student in the lab of Bridgett vonHoldt, an assistant professor of ecology and evolutionary biology at Princeton. “While there have been reports of ‘red wolves’ along the Gulf Coast, conventional science dismissed them as misidentified coyotes. Now, we have shown that at least one example of a ‘red wolf sighting’ has some validity to it, as these Galveston Island animals definitely carry genes that are present in the captive red wolf population yet absent from coyotes and gray wolf populations.” Their work appears in the special issue “Conservation Genetics and Genomics” of the journal Genes.

Prior to this, the only known living red wolves (Canis rufus) were a reintroduced group in North Carolina. The small wolves — larger than coyotes but smaller than the better-known gray wolves — once lived throughout the southeastern United States, but by the 1970s, they were facing extinction. To save the species, the last known red wolves were trapped for a captive breeding program. They had already begun interbreeding with coyotes, so of the 240 canines captured, only 17 were deemed 100 percent wolf. Of those, 14 successfully reproduced, and by 1990, a population of red wolves had been successfully reintroduced to North Carolina. The success of the red wolf recovery program led to other wolf re-introductions, including gray wolves (C. lupus) in the Yellowstone National Park region and the ongoing restoration efforts for the Mexican wolves (C. lupus baileyi) in the southwest.

Though initially successful ecologically, the red wolf population now has fewer than 40 surviving members, leaving them once again on the brink of extinction in the wild. 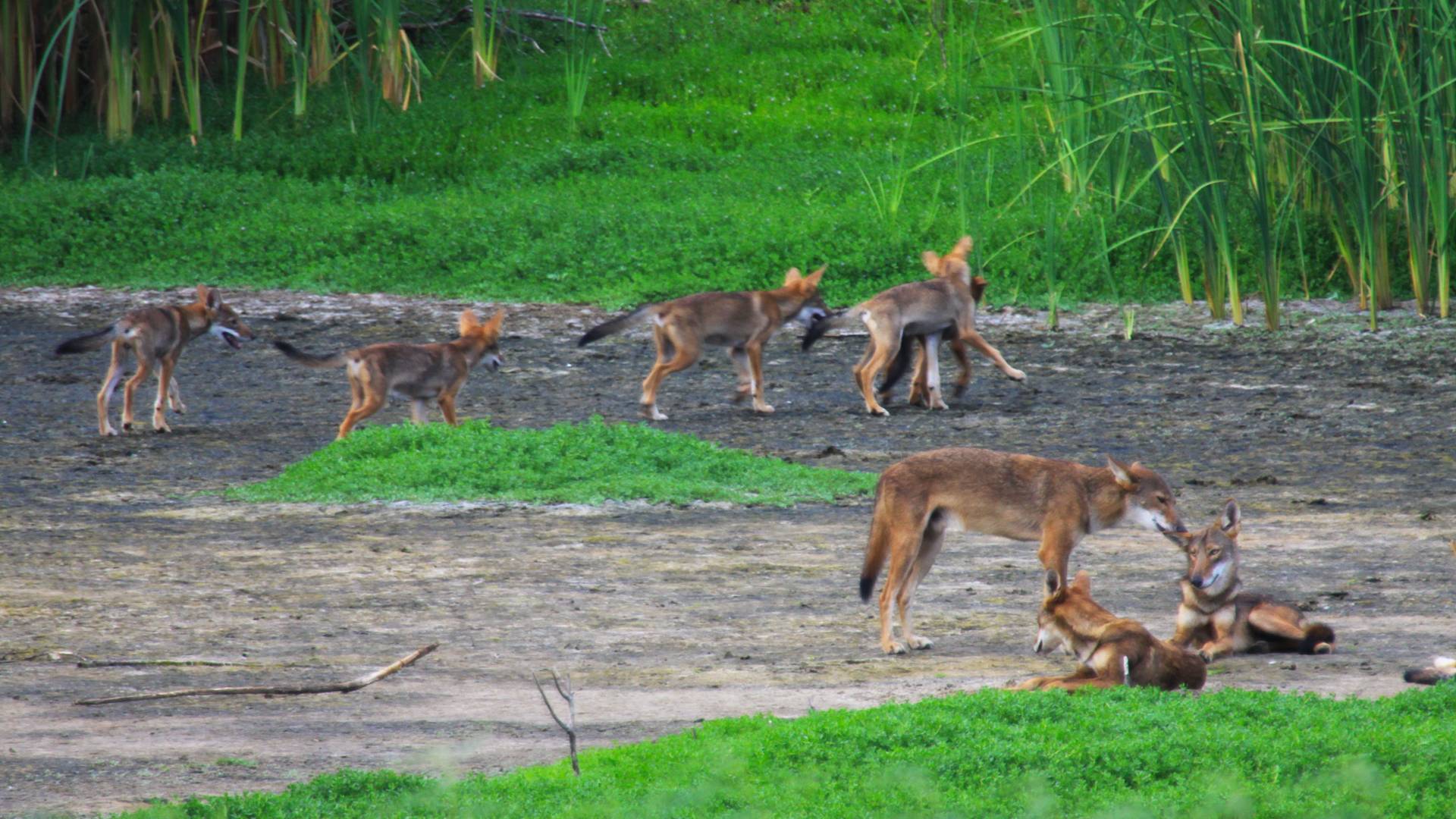 Wildlife biologist Ron Wooten spotted this pack of canines on Galveston Island, Texas, in a region where red wolves were declared regionally extinct more than 35 years ago. Princeton biologists Bridgett vonHoldt and Elizabeth Heppenheimer identified that these canines share DNA with both coyotes and a captive breeding group of red wolves. They also have unique genetic material that may represent genes that had been lost in the small population of wolves that began the captive breeding program in the 1970s.

This study traces its origins to wildlife biologist Ron Wooten, who had been observing a population of canines on Galveston Island. He emailed vonHoldt’s lab asking for genetic testing of two road-killed animals.

“I regularly receive this kind of inquiry, but something about Wooten’s email stood out,” said vonHoldt. “His enthusiasm and dedication struck me, along with some very intriguing photographs of the canines. They looked particularly interesting and I felt it was worth a second look.”

“Somewhere along the way, the second sample had gotten lost and he ended up sending us the dirty scalpel he had used to take the sample,” said Heppenheimer. “We have a huge inventory of coyote and wolf samples in the lab, and it’s quite rare that I would remember any one sample arriving, but no one had ever sent us a scalpel before, so it was a pretty memorable experience trying to extract this DNA.”

Once the researchers extracted and processed the DNA, they compared the samples to each of the legally recognized wild species of the genus Canis that occur in North America. They used samples from 29 coyotes from Alabama, Louisiana, Oklahoma and Texas; 10 gray wolves from Yellowstone National Park; 10 eastern wolves (C. lycaon) from Algonquin Provincial Park in Ontario; and 11 red wolves from the red wolf captive breeding program.

When they ran their genetic analyses, they found that the Galveston Island animals were more similar to captive red wolves than typical southeastern coyotes.

“I think we were all genuinely surprised that there was any indication of red wolf genes in either of these samples,” said Heppenheimer. “We get odd samples shipped to us fairly regularly, and most of the time they turn out to be coyotes. … Initially I was extremely skeptical that the analysis would turn up anything interesting, which in the end turned out to be very humbling. I think of myself as an expert on these animals, but in reality most of the time I’m just looking at my computer. It’s the people on the ground, who watch these animals regularly, who have made the major discovery.”

In addition to sharing genes unique to the captive red wolf population, the Galveston Island animals also carried a unique genetic variation not found in any of the known canines of North America.

“This variation may represent the red wolf derived genes that were lost as a result of captive breeding,” said Heppenheimer. “It’s incredibly rare to rediscover animals in a region where they were thought to be extinct, and it’s even more exciting to show that a piece of an endangered genome has been preserved in the wild.”

Because they can interbreed, coyotes and red wolves confound the most commonly recognized definition of “species,” meaning a group whose individuals can breed and produce viable offspring. But as that definition doesn’t account for organisms that reproduce asexually, like bacteria, biologists recognize many other definitions of species as well, said Heppenheimer. “Coyotes and wolves are considered distinct species based on the ‘ecological species’ concept, which recognizes wildlife as different species if they use different resources within their environments,” she said.

Wolves and coyotes prefer to breed with members of their own species, so hybridization occurs only under very specific ecological conditions, such as when population densities are so low that the animals are forced to choose between interbreeding and forgoing breeding altogether. Some recent studies have also found that disrupting a mated pair also increases the chances of hybridization.

Probably because of this interbreeding, the Galveston Island canines are “ambiguous-looking,” Heppenheimer acknowledged. “Even to a trained eye, coyotes and wolves can be notoriously difficult to tell apart from a distance or in a photograph without scale. That said, the more time spent looking at these animals, the more you begin to recognize subtle differences in snout shape or ear size.” The official species markers depend on precise measurements, such as hind foot length and head width, which the researchers didn’t have access to, since they were using photographs and small samples taken from road kill.

“It’s hard to put my finger on exactly what about these animals made them look ambiguous, since we didn’t take any quantitative measurements, but the snout shape and the overall size of the animals just didn’t look quite right for them to be pure coyote,” Heppenheimer said.

“Texas may be an appropriate location for future reintroduction efforts,” said Heppenheimer. If the reintroduced wolves breed with local coyotes, as has already begun happening again in North Carolina, it may have an unexpected benefit, she said. “If hybridization does occur, the ‘coyotes’ in the area may carry red wolf genes, and these hybridization events could restore red wolf genes that were lost as a result of the captive breeding program.” More research will be needed before this is done, she added.

In addition to Heppenheimer and vonHoldt, the research team included Kristin Brzeski, a former postdoctoral researcher in vonHoldt’s lab who is now an assistant professor at Michigan Technological University; Wooten, the wildlife biologist who provided the samples; William Waddell of Point Defiance Zoo in Tacoma, Washington; Linda Rutledge of Trent University in Ontario, Canada; Michael Chamberlain and Joseph Hinton from  the University of Georgia, Athens; and Daniel Stahler of Yellowstone National Park.

“This project was a huge collaborative effort, and all of the co-authors brought a unique perspective to this study,” said Heppenheimer. “In particular, Kristin Brzeski (who shares lead author credit) is an expert on contemporary red wolf genetics and conservation, whereas my background has focused more on patterns of genetic diversity in coyotes. Bridgett vonHoldt, the senior author on the project, has the most experience with genome-wide studies and oversaw the entire project. The three of us, along with our other co-authors, really came together to appropriately analyze and interpret the data.”

“This is a remarkable finding and encourages us to possibly redefine what is considered the ‘canonical coyote,’ said vonHoldt. “It may not actually exist in the American southeast. Coyote populations may more likely represent a mosaic collection of individuals with diverse histories, with some possibly carrying the remnants of an extinct species. We hope that these findings resonate with policymakers and managers, and influence how we think about endangered genetics.”