In the first evidence that natural selection favors an individual's infection tolerance, researchers from Princeton University and the University of Edinburgh have found that an animal's ability to endure an internal parasite strongly influences its reproductive success. Reported in the journal PLoS Biology, the finding could provide the groundwork for boosting the resilience of humans and livestock to infection. 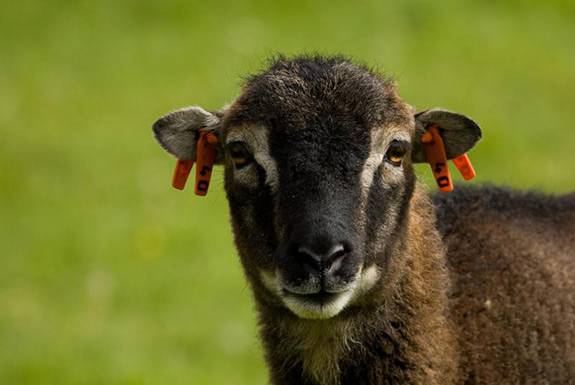 In the first evidence that natural selection favors an individual's infection tolerance, researchers from Princeton University and the University of Edinburgh have found that an animal's ability to endure an internal parasite strongly influences its reproductive success. The researchers used 25 years of data on a population of wild Soay sheep (above) living on the island of Hirta in northwest Scotland to assess the evolutionary importance of infection tolerance. The researchers tracked the number of offspring produced by each of nearly 2,500 sheep and found that those with the highest tolerance to infection produced the most offspring. (Photo by Arpat Ozgul, University of Edinburgh)

The researchers used 25 years of data on a population of wild sheep living on an island in northwest Scotland to assess the evolutionary importance of infection tolerance. They first examined the relationship between each sheep's body weight and its level of infection with nematodes, tiny parasitic worms that thrive in the gastrointestinal tract of sheep. The level of infection was determined by the number of nematode eggs per gram of the animal's feces.

While all of the animals lost weight as a result of nematode infection, the degree of weight loss varied widely: an adult female sheep with the maximum egg count of 2,000 eggs per gram of feces might lose as little as 2 percent or as much as 20 percent of her body weight. The researchers then tracked the number of offspring produced by each of nearly 2,500 sheep and found that sheep with the highest tolerance to nematode infection produced the most offspring, while sheep with lower parasite tolerance left fewer descendants.

To measure individual differences in parasite tolerance, the researchers used statistical methods that could be extended to studies of disease epidemiology in humans, said senior author Andrea Graham, an assistant professor of ecology and evolutionary biology at Princeton. Medical researchers have long understood that people with similar levels of parasite infection can experience very different symptoms. But biologists are just beginning to appreciate the evolutionary importance of this individual variation.

"For a long time, people assumed that if you knew an individual's parasite burden, you could perfectly predict its health and survival prospects," Graham said. "More recently, evolutionary biologists have come to realize that's not the case, and so have developed statistical tools to measure variation among hosts in the fitness consequences of infection."

Graham and her colleagues used the wealth of information collected over many years on the Soay sheep living on the island of Hirta, about 100 miles west of the Scottish mainland. These sheep provide a unique opportunity to study the effects of parasites, weather, vegetation changes and other factors on a population of wild animals. Brought to the island by people about 4,000 years ago, the sheep have run wild since the last permanent human inhabitants left Hirta in 1930. By keeping a detailed pedigree, the researchers of the St Kilda Soay Sheep Project can trace any individual's ancestry back to the beginning of the project in 1985, and, conversely, can count the number of descendants left by each individual.

Nematodes puncture an animal's gut and can impede the absorption of nutrients. Therefore, tolerance to nematode infection could result from an ability to make up for the lost nutrition, or from the ability to repair damage the parasites cause to the gut, Graham said. "This island is way out in the North Atlantic, where the sun doesn't shine much," she said. "So tolerant individuals might be the ones who are better able to compete for food or better able to assimilate protein and other useful nutrients from the limited forage." 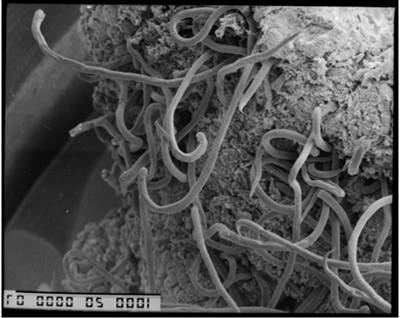 The researchers examined the relationship between each sheep's body weight and its level of infection by nematodes, tiny parasitic worms that thrive in the gastrointestinal tract of sheep. This scanning electron micrograph shows nematodes on the surface of a sheep's gut with a field of view of approximately one centimeter. An economic detriment to sheep farmers, nematodes infect both wild and domesticated sheep, resulting in weight loss, reduced wool growth and death. (Photo by David Smith, Moredun Research Institute)

Tolerant animals might invest energy in gut repair, but would then be expected to incur costs. Graham and her colleagues identified a similar evolutionary tradeoff in a 2010 study that compared immune-response levels and reproductive success in female Soay sheep. They found that animals with strong antibody responses produced fewer offspring each year, but also lived longer. The team has not yet been able to detect costs of parasite tolerance in the sheep, but such costs could help explain variation in tolerance if the most tolerant animals were at a disadvantage under particular conditions.

While the PLoS Biology findings provide strong evidence that natural selection favors infection tolerance, they do raise questions, such as how the tolerance is generated, and why variation might persist from one generation to the next despite the reproductive advantage of tolerance, Graham said. The data in this study did not permit the researchers to detect a genetic component to tolerance. If genetics do play a role, she suspects multiple genes may interact with environmental factors to determine tolerance; ongoing research will help to tease apart these possibilities.

Understanding the genetic underpinnings of nematode tolerance could someday guide efforts to boost tolerance in livestock by identifying and selectively breeding those animals that exhibit a heightened parasite tolerance, said David Schneider, an associate professor of microbiology and immunology at Stanford University.

"This study shows that parasite tolerance can have a profound effect on animal health and breeding success," said Schneider, who is familiar with the work but was not involved in it. "In the long term, this suggests that it could be profitable to invest in breeding tolerant livestock."

In humans and domesticated animals, intestinal parasites are becoming increasingly resistant to the drugs used to treat infections, Graham said. If the availability of nutrients, even just during the first few months of life, impacts lifelong parasite tolerance, simple nutritional supplements could be an effective way to promote tolerance in people. About 2 billion people are persistently infected with intestinal nematode parasites worldwide, mostly in developing nations. Children are especially vulnerable to the worms' effects, which include anemia, stunted growth and cognitive difficulties.

"Ideally, we would clear the worms from the bellies of the kids who have those heavy burdens," Graham said. "But if we could also understand how to ameliorate the health consequences and thus promote tolerance of nematodes, that could be a very powerful tool."

The study was funded by the Natural Environment Research Council of the United Kingdom and the European Research Council. Graham's research is supported by the Research and Policy for Infectious Disease Dynamics program of the U.S. Department of Homeland Security's Science and Technology Directorate and the Fogarty International Center of the National Institutes of Health.