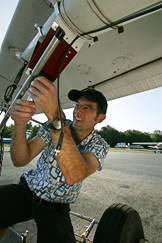 Below left: A darner dragonfly with a red radio transmitter attached to its body dangles from a scientist’s finger before returning to flight near Cape May, N.J. The transmitters, which weigh about a third as much as a paper clip, helped the Princeton research team make discoveries about dragonfly migration habits.

On the New Jersey shore, many signs of the changing seasons do not differ greatly from those found elsewhere in the country. V-shaped flocks of geese and twittering masses of songbirds course over the dunes as the migrants head for milder latitudes.

But as Princeton’s Martin Wikelski and his research team found out last fall, some other, less-expected travelers are adding their own buzzing chorus to the migration song.

“I went out to Cape May to watch the birds and butterflies with a colleague of mine, and he showed me that right over our heads, the local dragonflies were migrating too,” said Wikelski, an associate professor of ecology and evolutionary biology who has made a career out of studying animal movements. “It wasn’t something I had expected to see, but we immediately wondered where they were off to. No one had ever followed them because no one could.”

The latest in high technology and some old-fashioned improvisation have helped Wikelski and his colleague, David Wilcove, provide the first glimpses of an answer to that question. Their research team recently published a paper in Biology Letters showing that the dragonflies — some of the most ancient animal species on the planet — may operate on the same travel instincts as birds do.

“What we learned makes us wonder how long ago life on this planet discovered migration,” Wikelski said. “The idea may have been around long before the first bird ever flew.”

Over the years, Wikelski has become adept at attaching miniature radio transmitters to animals and tracking them as they travel from place to place in the wild. Songbirds have been a common research subject, but the tiniest transmitters have until recently been too heavy for any smaller creatures to carry.

“When I showed Martin the dragonflies, I asked him if we’d ever be able to build a transmitter small enough to tag one of them,” said Wilcove, a professor of ecology and evolutionary biology and public affairs.

Within the past few years, research into miniature power supplies for personal electronics has made enough leaps that Sparrow Systems, an Illinois-based manufacturer of homing devices with which Wikelski has had a long relationship, was able to design transmitters weighing only 300 milligrams — about a third as much as a paper clip.

“Dragonflies routinely carry prey that weighs more than that,” said Wikelski. “We figured they would work, provided we could manage to get them attached.”

Wikelski’s team traveled back to the Jersey shore and, over some weeks, caught 14 green darners, one of the 25 to 50 kinds of dragonflies thought to migrate out of the 2,500 known species. After experimenting a bit, they hit upon a way to attach the transmitters without hurting the flies.

“We ended up using a mixture of Superglue and eyelash adhesive — very effective and very much improvised,” Wikelski said.

Once the transmitters were attached, the team tracked the migrating flies by following them in cars and with a small airplane.

“The batteries in the transmitters lasted about two weeks before giving out, but evidently none of the dragonflies were eaten by predators or lost their transmitters prematurely,” Wikelski said. “We got a lot of good data from the group, and we immediately started noticing familiar patterns in their behavior.”

The darners, it turned out, seemed to have the same impressions about what makes a good migration day as the songbirds the team had studied elsewhere. Groups of both animals only took wing after temperatures fell two nights in a row, for example. Windy days kept both grounded. And if an individual traveled one day, it was unlikely to move the next.

“Both birds and dragonflies seem to like to rest in between the legs of their journey, most likely so they can recuperate,” Wikelski said. “That sort of thing makes sense to anyone who has been on a long journey. But even the smaller details of songbird and dragonfly behaviors during migration seem eerily similar.”

For example, Wikelski mentioned what happened when the dragonflies reached Cape May, the northern tip of land at the mouth of Delaware Bay. At that point, the insects would have needed to cross a 19-kilometer stretch of open water before making landfall in Delaware.

“After flying out over the bay for a short distance, the darners turned around and headed back along the bay’s northern shoreline until they reached a point where the Delaware River was only four kilometers wide,” he said. “Ornithologists have noted that many migrating songbirds also prefer to go out of their way to avoid large environmental barriers.”

Wikelski said the study had piqued his team’s interests regarding what instinctive decision-making patterns might exist in both birds and dragonflies, but said that they had hardly scratched the surface of the answer.

“Fossil records show that dragonflies appeared on Earth about 285 million years ago, predating the first birds by about 140 million years,” he said. “It’s likely that some of the early dragonflies also experienced seasonal changes in the environment that induce migration, so it means these migratory patterns were entrenched in nature quite early in the planet’s history.”

Dragonflies are not considered a pest, but like other more worrisome insects, they do swarm in huge numbers in many parts of the world. Swarms in Chicago often number in the millions of flies, and one Argentinean swarm was estimated to be as large as 4 to 6 billion. The newfound ability to track insects with the transmitters makes Wikelski think anyone involved in agriculture would find such information useful, to say the least.

“It’s been possible for decades to track locust swarms, for example, using radar,” he said. “Farmers want to know about how these animals move, but what do you do if you’re trying to track locusts across several countries, a few of which may not be keen about you crossing their borders with a large airplane loaded with sensitive equipment? It’s not always easy to get the information you need, and in these cases it’s not unusual for the people who will benefit most from it to be in places that you can’t go yourself.”

Wikelski has a solution that, while expensive and ambitious at first glance, could provide a resource for both biology and agriculture worldwide: a satellite.

“These small transmitters could enable us to track animals from space all around the globe if a dedicated satellite was available,” Wikelski said. “Though nearly everyone has heard of animal migration, we actually know very little about how animals move. It could tell us a lot about the way species respond to climate change and other disturbances. Because the economies of many nations are still largely agrarian, a better understanding of how, say, locust swarms travel could assist us with managing both local agriculture and the world economy that hinges upon it.”

Being more than a bit short on the necessary funds has not stopped Wikelski from planning ahead for a time when interest in such a project could exist. Princeton aerospace engineering professor Jeremy Kasdin, an expert in the design and control of spacecraft, has enlisted the help of some of his students to design a satellite for the future.

“Jeremy teaches a course on spacecraft design, and I approached him awhile back about my team’s work,” Wikelski said. “This semester, his students came up with a terrific early blueprint for the satellite we would need for animal tracking as part of their final class project. I’m not sure we’ll have it in orbit as soon as we’d like, but we’re one step closer.”

Satellite system may give ecologists a bird's-eye view

Biologist flies with the birds