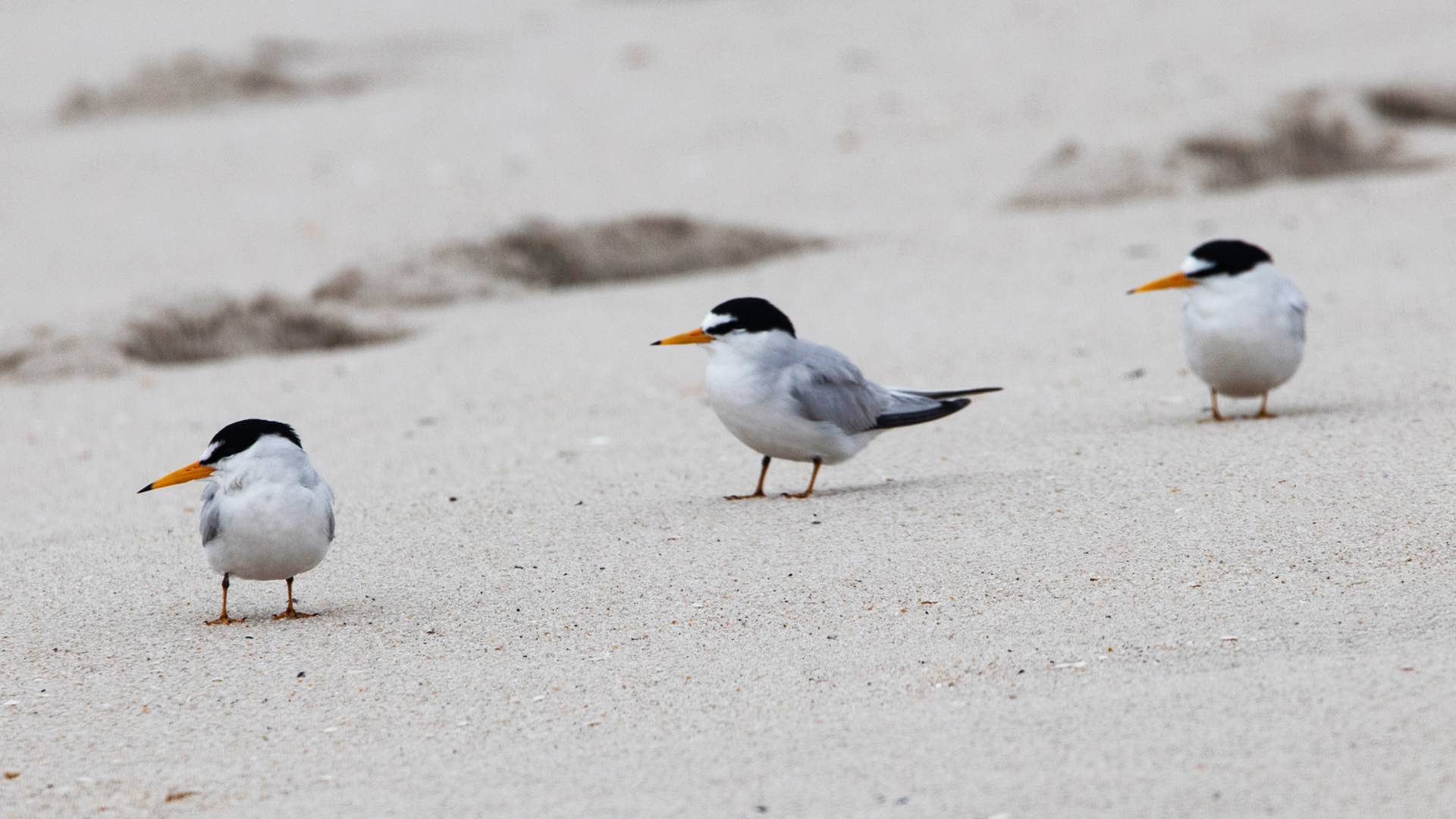 Least terns lean into the wind on the Coral Avenue Beach in Cape May on Saturday, May 14, the day of the annual World Series of Birding competition won by a group of Princeton student birders.

CAPE MAY, New Jersey — On a midnight-to-midnight run, six Princeton University students in a minivan traveled New Jersey from top to bottom to spot more than 200 species of birds and earn winged victory in New Jersey Audubon’s World Series of Birding. 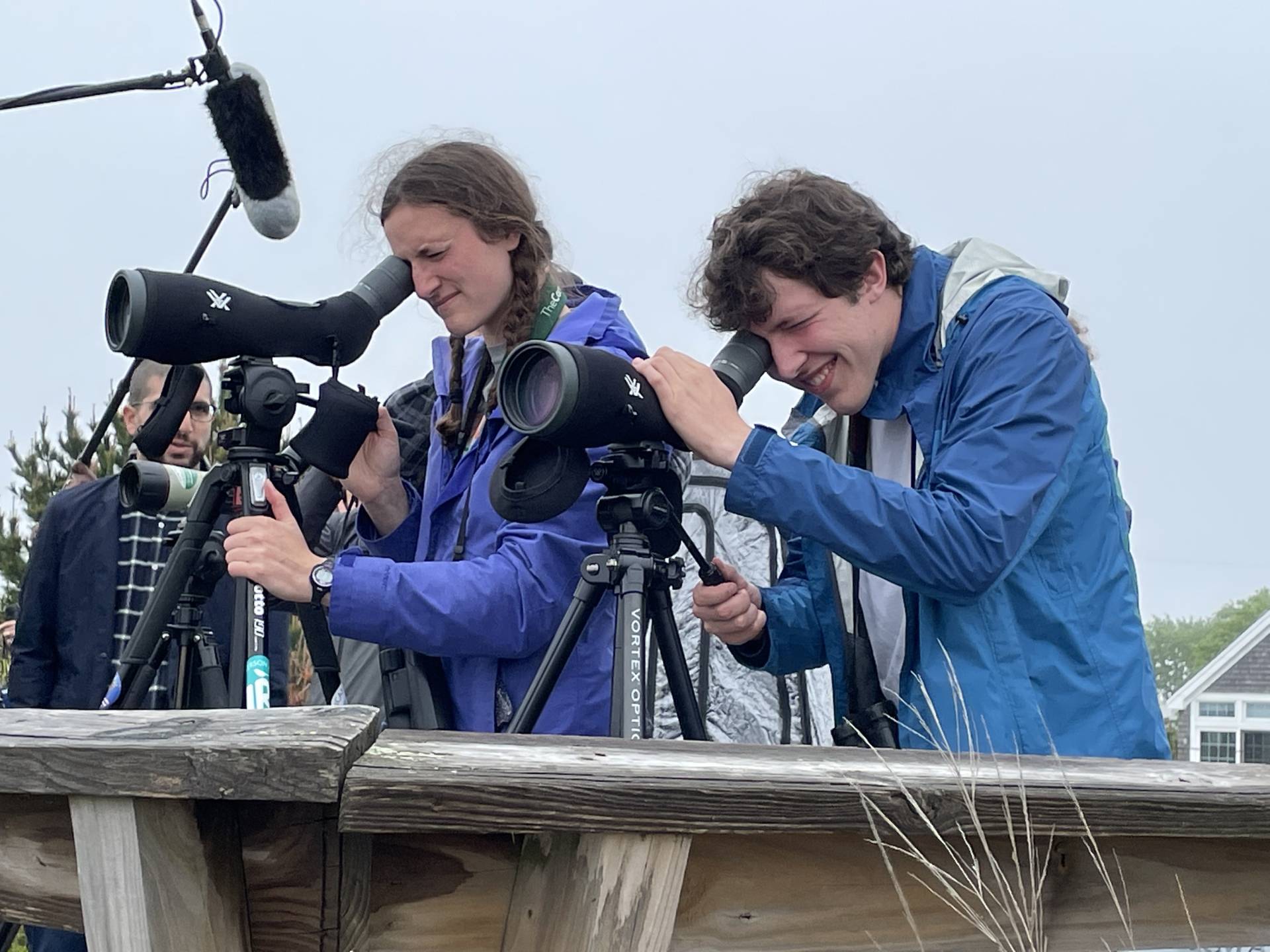 From an observation deck at Coral Avenue Beach, Claire Wayner and Patrick Newcombe look through spotting scopes to identify birds flying off Cape May Point.

The Princeton Tiger Shrikes — named for an East Asian variety of birds that impale prey on thorns and barbs — started the competition May 14 in the pre-dawn hours by listening for owls and other nocturnal birds at a marsh near the New York border.

“This is the most intense ‘big day’ competition of them all. It’s quite the thing to jump into,” said Julian Gottfried, a rising junior who took part in his first World Series with four fellow undergraduates and a graduate student, each of whom had participated in the event at least twice before. 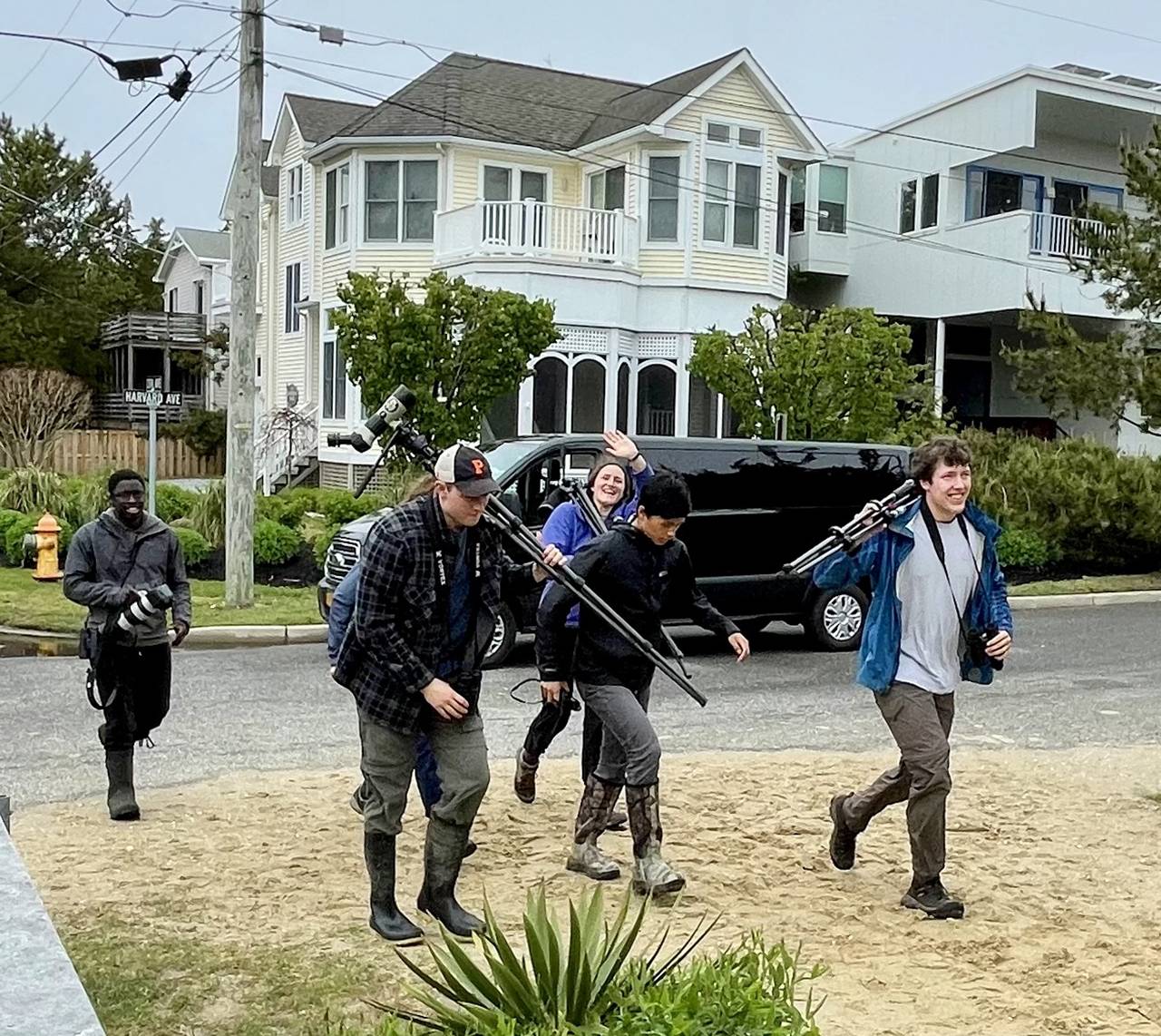 Having popped out of their minivan, members of the Princeton Tiger Shrikes arrive at Coral Avenue Beach. From left to right are Kojo Baidoo, Alex Wiebe, Claire Wayner, David Dorini and Patrick Newcombe. Julian Gottfried is behind Wiebe.

Dashing from forests to fields to beaches, the Tiger Shrikes followed a detailed route the team had scouted and mapped.

“We put in a lot of time to prepare,” said Claire Wayner, a Class of 2022 graduate who captained the team. “Some of us spent up to 10 days birding the areas" in advance, most of them in the northern reaches of the state.

That entailed waking up at 2 a.m. or 3 a.m. and driving a long way to search for likely places to find certain species. “We found multiple raptor nests,” Wayner said, so the group knew where they’d likely spot hawks and other predatory birds on the day of the competition.

Begun in 1984, the World Series of Birding originally was held exclusively in New Jersey, a major stopping point for birds heading north during their annual spring migration. The World Series, scheduled to coincide with the peak of migration, was expanded with the onset of the COVID-19 pandemic in 2020 to allow birders to compete in states along the Atlantic flyway.

Over the course of the day, the Tiger Shrikes — each using binoculars and sharing three spotting scopes — tallied 205 species. They included common birds like the robins, cardinals and house sparrows familiar to most New Jerseyans looking out their windows at home. The birders also spotted 20 American goldfinches (the state bird) and logged scores of gulls and sandpipers commonly seen “down the shore.”

The Princeton team had to tramp through rain, sometimes heavy, for a good part of the day, and fog settled over Cape May as they arrived late in the afternoon. Wayner noted that persistent north winds in the days preceding the event limited the number of warblers and other migratory birds that likely would be spotted most years in mid-May.

“If the conditions had been better, we could have relatively easily gotten 10 to 15 more species,” Wayner said. “The weather did create favorable conditions that pushed some pelagic species on shore.”

That enabled the team to spot 20 Wilson’s Storm-Petrels, four Northern gannets and a single brown pelican, birds that normally fly miles off the New Jersey coast.

Members of the team recorded a few “lifers” — species they had never seen before — such as the Nelson’s sparrow that Gottfried spotted in a patch of grass at Forsythe National Wildlife Refuge. There were a few expected birds they didn’t see or hear, such as soras, pileated woodpeckers and several species of warblers. 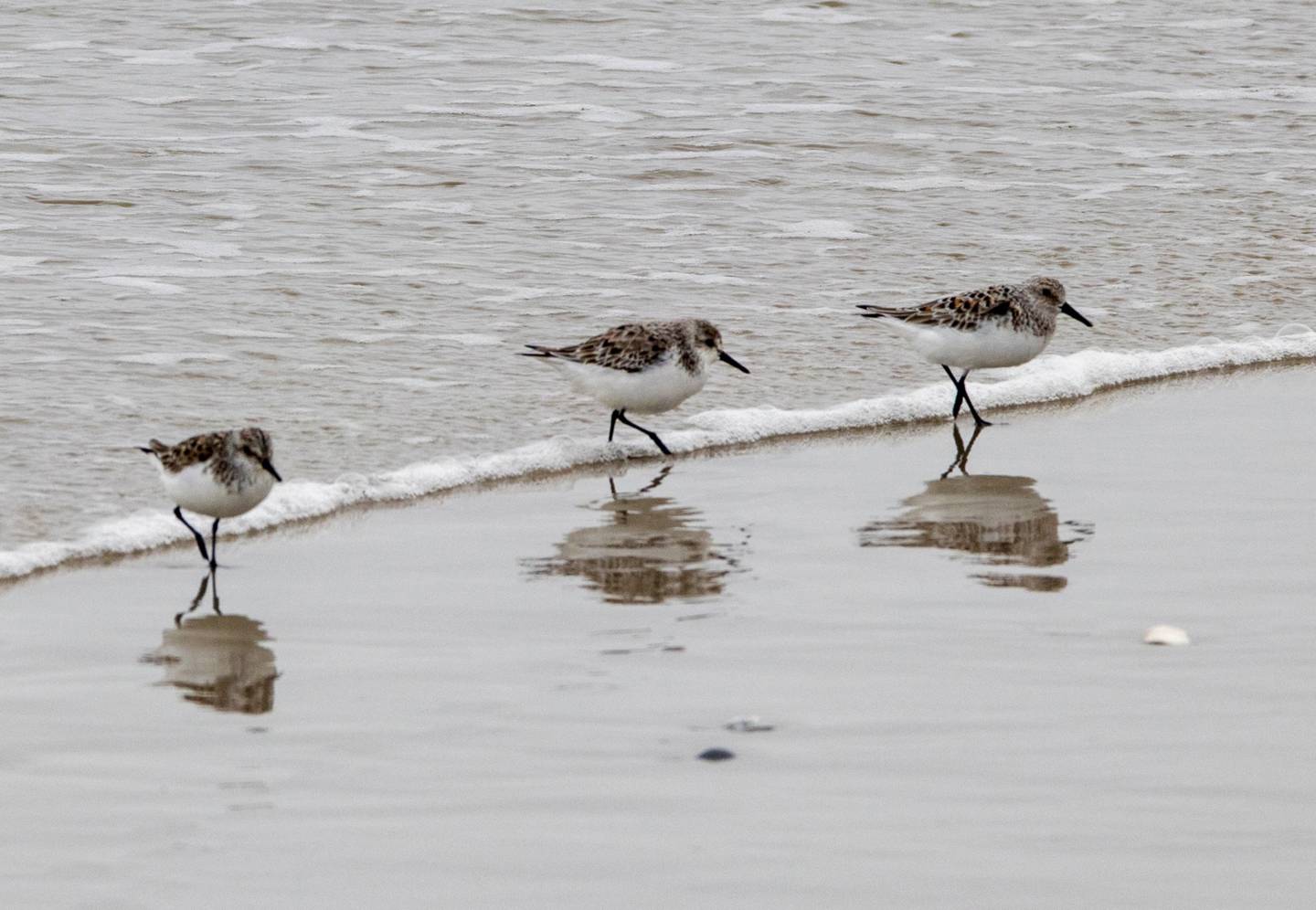 A trio of sanderlings walks in the surf at Coral Avenue Beach.

Ornithologists and other scientists studying migration patterns and climate change draw on the data collected from the World Series of Birding and other national and international birding events to inform their research. The Cornell Ornithology Lab released a report in 2021 showing an alarming decrease in bird populations in the United States and Canada, down by 2.9 billion breeding adults since 1970.

The World Series of Birding, Armstrong said, "raises awareness of bird conservation as a whole, to reinforce the notion that birds are one of the best proxies for the overall health of the environment. If birds aren't doing well, there's something in the environment that's affecting them."

“Grassland species have been in considerable decline,” noted Patrick Newcombe, a rising sophomore participating in his sixth World Series of Birding. “When I started doing the World Series, there was a spot where we could find vesper sparrows singing at dawn. This year we didn’t find any.”

Not only did they deal with the challenges of finding elusive species, the students also had to fight fatigue. Kojo Baidoo, a rising junior, said even after completing his scouting trips — which came just ahead of and during final exams — he kept falling asleep at 7 p.m. and waking up at 3 a.m.

For their efforts, the Tiger Shrikes were awarded the Urner-Stone Cup, given annually to the birding team that finds the most species in New Jersey on the day of the competition. The team also received a trophy for topping 14 other teams in the “Boundless Birding” category. 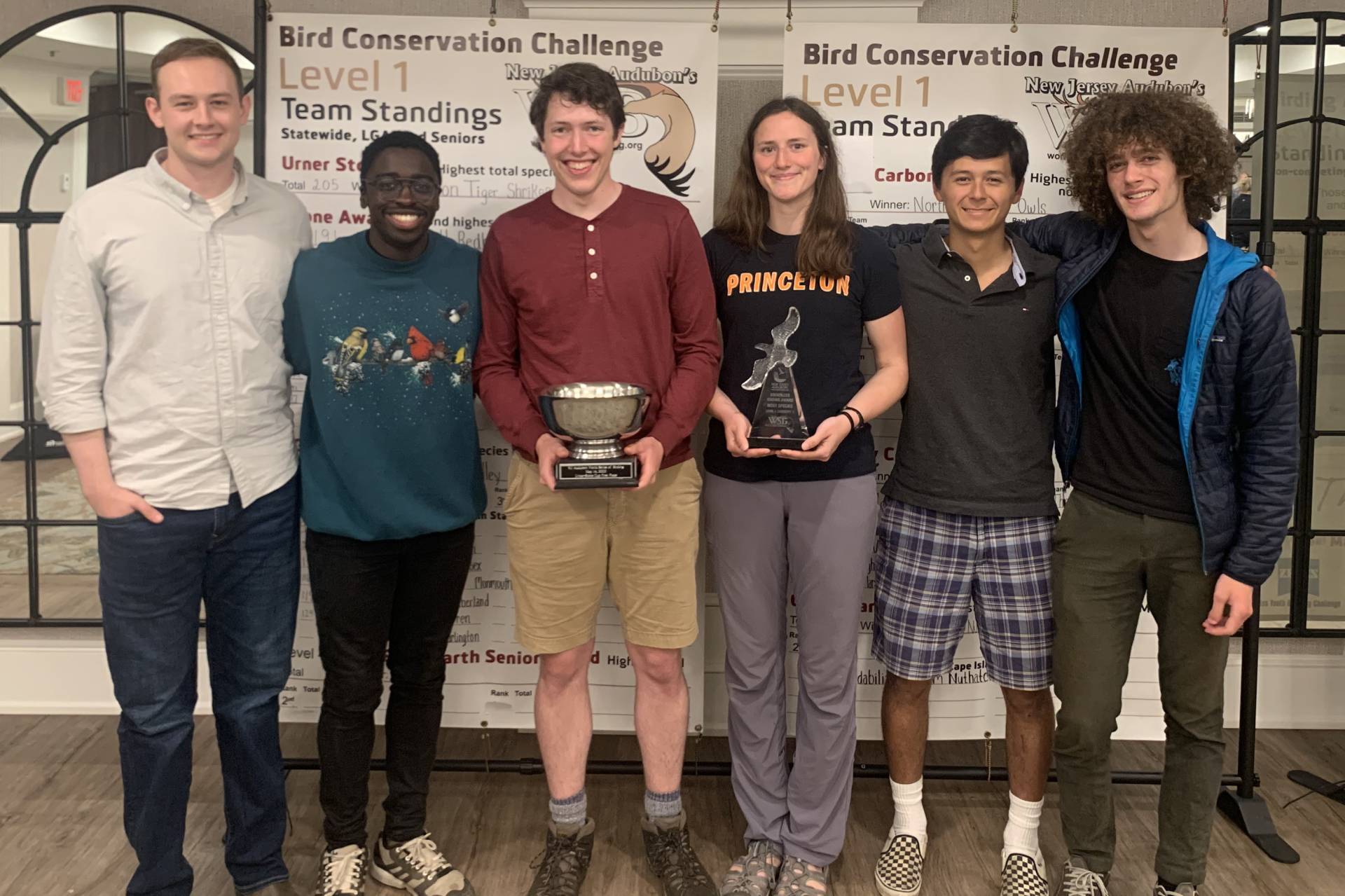 The Tiger Shrikes pose for a photo in Cape May after being presented their awards for winning their division and the overall title in the World Series of Birding. Left to right are Alex Wiebe, Kojo Baidoo, Patrick Newcombe, Claire Wayner, David Dorini and Julian Gottfried.

“It’s exciting,” Newcombe said. “This is the culmination of so much work by so many people.”

The other members of the Tiger Shrikes are David Dorini, a rising sophomore, and Alex Wiebe, a graduate student in ecology and evolutionary biology. Before entering college, Dorini was a member of New Jersey Audubon's youth birding program, and Baidoo, Newcombe, Wayner and Wiebe were in the Youth Maryland Ornithological Society.

Members of the Tiger Shrikes are also members of the Princeton Birding Society, a club Wayner and Joe Kawalec of the Class of 2021 founded during her first year on campus. The club has around two dozen core members and about 200 people on its email list, where bird-watching walks and other activities are announced. Club members advocate for bird awareness and bird safety on campus.

The Tiger Shrikes are supported by the High Meadows Environmental Institute, the Department of Ecology and Evolutionary Biology, the Office of the Dean of Undergraduate Students and the Stoddard Lab.

“I hope the World Series of Birding," Newcombe said, "will stimulate an interest in making our campus as friendly to birds as possible."