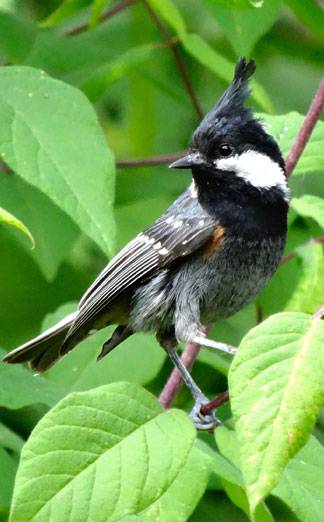 A Princeton University-based study suggests that the ranges of birds such as the spot-winged tit (Periparus melanolophus), above, in the world's temperate mountain areas may actually be determined more by temperature and habitat than competition, as is often presumed. (Photo by Paul Elsen, Department of Ecology and Evolutionary Biology)

For decades, among the most enduring questions for ecologists have been: "Why do species live where they do? And what are the factors that keep them there?" A Princeton University-based study featured on the February cover of the journal Ecology could prove significant in answering that question, particularly for animals in the world's temperate mountain areas.

The researchers spent two years documenting the distribution of 70 bird species across the Himalayas in India and found that temperature and habitat predominantly determine the elevations where the birds live. Earlier research by other scientists on tropical birds had shown that competition limited the ranges of most species, a conclusion often presumed to be true for temperate zones as well.

The researchers found, however, that competition sets the boundaries for a mere 12 percent of Himalayan bird species, while temperature and habitat dictate where 48 and 40 percent of species, respectively, feather their nests. The study is among the first to specifically record temperature across different species' entire elevational ranges; previous studies had used elevation as an unreliable proxy for temperature. 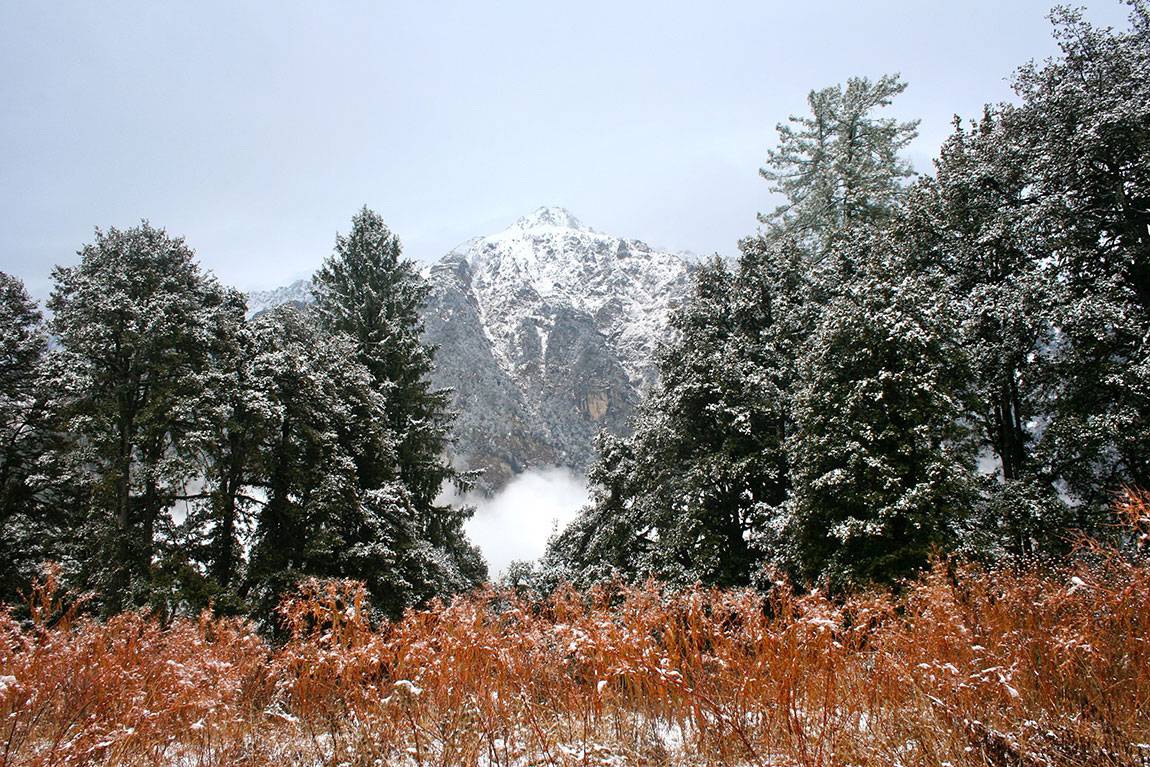 A Princeton University-based study suggests that the ranges of birds in the world's temperate mountain areas — often presumed to be determined by competition — may actually be determined more by temperature and habitat. The researchers spent two years in India documenting the distribution of 70 Himalayan bird species, and found that temperature and habitat predominantly determine the elevations where the birds live. Above, a mixed coniferous forest in Great Himalayan National Park. (Photo by Paul Elsen, Department of Ecology and Evolutionary Biology)

The findings provide strong evidence that competition and other factors are not uniformly important across all regions of the world, said co-author David Wilcove, a professor of ecology and evolutionary biology and public affairs and the Princeton Environmental Institute.

"The rules of the game are very different in different places," Wilcove said. "It's an important step toward building a comprehensive global perspective. Understanding this could be really important in predicting how life on Earth will change under climate change. If we're not able to understand the rules by which nature is put together, we won't understand how all the things we're doing to the world will affect the wildlife."

First author Paul Elsen, who led the study as a Princeton graduate student in ecology and evolutionary biology, explained that the findings indicate that species living in temperate mountain habitats — particularly in the northern latitudes — could face even greater repercussions from climate change than previously thought as temperatures rise and habitats change or are disrupted. The researchers selected birds for their ubiquity, variety and ease of observation, but the results could likely apply to many other warm-blooded mountain species, he said.

"If species are bound to where they live by temperature, they are going to be much more controlled by temperature moving forward than we may have thought. Where they live in the future will likely directly track local temperature changes resulting from global climate change," said Elsen, now a David H. Smith Conservation Research Fellow at the University of California-Berkeley.

"Mountainous regions are very sensitive to climate change because their temperatures are increasing rapidly," Elsen said. "Across the world, we've already seen species shifting their ranges in response to climate change."

The study focused on three types of mountain habitat similar to those found in other temperate regions, including the United States: mixed broad-leaf and coniferous forests (above center); mixed coniferous forests; and high-altitude forests composed largely of hardy evergreens such as firs. Species such as the grey-winged blackbird (Turdus boulboul), left, and the snowy-browed flycatcher (Ficedula hyperythra), right, live side-by-side with competitors. (Photos by Prashant Negi and Paul Elsen, Department of Ecology and Evolutionary Biology)

If scientists and conservationists know the factors that determine why species live where they do, they can more effectively target their efforts and resources to ensure those species' survival, said Wilcove, who was Elsen's doctoral adviser at Princeton.

"If the pattern we found for Himalayan birds applies more generally across the temperate zone, we can expect disruptions in the communities of species across those zones in the wake of climate change and land-use change," Wilcove said.

"If you know species will have to move — but we can't predict with confidence exactly where they'll move — you want to make it as easy as possible for them to get from one place to another and find the resources they need," he said.

"That bolsters the case for more parks and reserves spanning more places," Wilcove said. "We have to think about the larger landscape and make sure we have plenty of places for species to go. We also need to find ways to provide corridors of suitable habitat between protected areas so species can move as the climate changes."

Because habitats change with elevation, mountains are ideal for studying how species change with temperature and terrain, Elsen said.

"If a species is spread out across a vast area, it's extremely difficult to study that species across its entire natural range," he said. "If you work in mountainous areas, however, where each species occupies a particular elevational band, you can step into a species' range in the morning and by the afternoon be at the end of it just by walking upslope. We can study a large number of bird species relatively easily."

The researchers found that competition set the boundaries for a mere 12 percent of Himalayan bird species, while temperature and habitat dictate where 48 and 40 percent of species live, respectively. Pictured above are a chestnut-headed tesia (Oligura castaneocoronata), left, a species limited by temperature, and a collared grosbeak (Mycerobas affinis), right, a species limited by habitat. Both species live in upper temperate forests (center). (Photos by Prashant Negi and Paul Elsen, Department of Ecology and Evolutionary Biology)

The study focused on three types of mountain habitat in the Indian Himalayas: mixed broad-leaf and coniferous forests; mixed coniferous forests; and high-altitude forests composed largely of hardy evergreens such as firs. These habitats are similar to those found in other temperate regions, including the United States.

Elsen spent four months on foot scouting locations in the Himalayas for his research. He needed relatively undisturbed habitats on continuous elevational gradients ascending the mountainside; at the same time, Elsen had to be able to walk the terrain while burdened with camping and scientific equipment.

He spent April-June of 2013 and 2014 trekking across the Indian states of Himachal Pradesh and Uttarakhand collecting data. Elsen, along with co-author and lead field assistant Ramnarayan Kalyanaraman of the Himal Prakriti nature trust in Uttarakhand, recorded the presence and abundance of bird species as well as the habitat and temperature (using monitoring equipment he set up for the duration of the study). Co-author Krishnamurthy Ramesh from the Wildlife Institute of India acted as Elsen's adviser in India and assisted with permits and logistics.

The findings indicate that species living in temperate mountain habitats — particularly in the northern latitudes — could face even greater repercussions from climate change than previously thought. Pictured above are a lemon-rumped warbler (Phylloscopus chloronotus), left, a species limited by competition, and a spot-winged tit, right, both of which live in mixed coniferous forests, center, such as those found in the Sierra Nevada. (Photos by Paul Elsen, Department of Ecology and Evolutionary Biology)

The Himalayas exhibit a remarkable diversity of birds, Elsen said — nearly 10 percent of the world's bird species live there for at least part of the year. Uniquely, the diversity of Himalayan birds increases two-fold as one moves from west to east, he said. Because of that, Elsen and his field assistants were able to isolate and analyze competition as a mechanism for species distribution.

The eastern Himalayas have more species and therefore a higher number of potential competitors than the western Himalayas. Thus, if species are limited by competition, birds that occur in both the east and the west should occupy a narrower band of elevation toward the eastern part of their geographic range, Elsen said. But the researchers found that more than three-fourths of species lived side-by-side with their presumed competitors. On the other hand, nearly half of the bird species studied had their elevational ranges determined by temperature or habitat.

"Species are actually able to coexist with what we expected to be their dominant competitors," Elsen said. "The numbers of species limited by temperature and habitat, however, are much larger than previous studies from other parts of the world have reported. The significance is that temperature is going to play a much more important role in establishing future distributions than we previously thought." 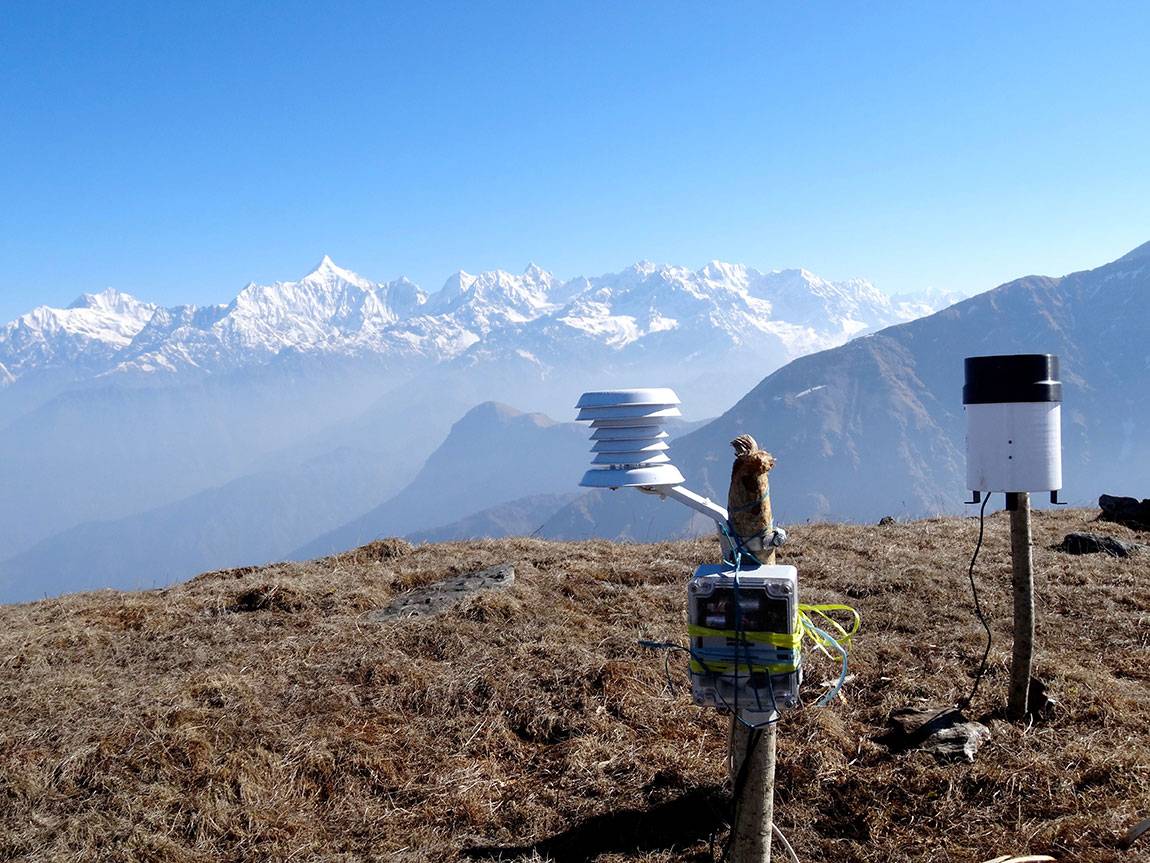 The study is among the first to specifically record temperature across different species' entire elevational ranges; previous studies had used elevation as an unreliable proxy for temperature, the researchers said. The researchers spent months at a time trekking across the Himalayas carrying camping and scientific equipment to set up data loggers such as those above, which recorded temperature and precipitation at the summit of Chuli Peak in Askot Wildlife Sanctuary, India. (Photo by Paul Elsen, Department of Ecology and Evolutionary Biology)

Trevor Price, a professor of biology at the University of Chicago, said that the robust data the researchers provide convincingly portray temperature and habitat as significant determinants of range, not just in the Himalayas but possibly much more broadly.

"One of the extremely impressive things about this study is that they managed to document all these bird distributions," said Price, who is familiar with the research but had no role in it.

"I think the results are fascinating, and an important contribution. Their results are very general and it would be worth trying to replicate them elsewhere. I really don't think systems are that different around the world," he said. "Theoreticians can use these data to model how we think climate change will affect ranges. As the temperature moves up the mountain, the birds will likely move with it."

Yet the findings show that no one factor guides species ranges the world over, Price said. Just as the study found that competition is not universally applicable, the strong influence of temperature in the Himalayas suggests that other factors such as rainfall and parasites might govern species' territories in other parts of the world.

"This clearly shows a role for temperature, but it's very difficult to apportion the effects among all the different things that could be going on. I actually believe that temperature is among many factors — indeed, temperature and precipitation are likely to also affect where prey and other resources are located, thereby indirectly affecting these birds," Price said.

"The background data they have now will set the stage for much more rigorous analyses," he said. "Ultimately, we are going to need more detailed studies to ask how the various factors interact. The bottom line is that there has got to be a combination of all these factors at work — there can't just be one."

The paper, "The role of competition, ecotones and temperature in the elevational distribution of Himalayan birds," was published in the February 2017 edition of Ecology. The work was supported by the National Science Foundation (grant no. DGE-1148900), the High Meadows Foundation and Princeton's Walbridge Fund Graduate Award.