A new theory of plant evolution suggests that the 400 million-year drive of flora across the globe may not have been propelled by the above-ground traits we can see easily, but by underground adaptations that allowed plants to become more efficient and independent.

As plant species spread north and south from their nutrient-rich tropical beginnings, the fine tips of their roots became narrower and more widespread to help them explore increasingly poor soil for vital nutrients, according to a Feb. 21 study in the journal Nature led by researchers from Princeton University and the Chinese Academy of Sciences (CAS) in Beijing.

In addition, as plants spread into unpredictable environments such as arid deserts they grew less dependent on the symbiotic fungi — or mycorrhiza — that colonize roots and help host plants obtain the essential plant nutrients nitrogen and phosphorous.

Researchers from Princeton University and the Chinese Academy of Sciences have posed a theory of plant evolution based on root adaptations that allowed plants to become more efficient and independent. The cross sections above show that the roots of plants such as the subtropical oak species Lithocarpus chintungensis (largest cross section, center left) and the tropical species Parashorea chinensis (at center right of largest cross section) retained their ancestral thickness and reliance on symbiotic fungi (purple ring) that surround the root to help it obtain nutrients. As plant species spread from their nutrient-rich tropical origins, however, the root tips of plants such as the desert shrub species Tamarix ramosissima (at far left of largest cross section) evolved to be thinner so they could more efficiently explore soil for nutrients, and they have less dependence on symbiotic fungi.

The findings reconsider how plants adapted to new environments as they evolved, said corresponding author Lars Hedin, the George M. Moffett Professor of Biology and chair and professor of ecology and evolutionary biology and the Princeton Environmental Institute. Scientists have in the past focused on above-ground characteristics, primarily leaf traits and the efficiency with which plants absorb sunlight for photosynthesis, he said.

Instead, Hedin said, he and his colleagues have found for the first time that root diameter and reliance on fungi — or the lack thereof — are the traits that most consistently characterize the plant community across entire biomes, which are large distinct communities of animals and plants such as a desert, temperate forest or savanna.

"These are the secret strategies that plants have used over time to take over the world," Hedin said. "Our goal was to unlock the understanding of those strategies, and our findings offer a new global theory for plant evolution. Hidden underground there has been a tremendous game of survival-of-the-fittest and we are fortunate to have the first-ever view of the science of that game.

"This work has major implications for conservation and our stewardship of the plant world," Hedin continued. "It provides some of the hidden, below-ground rules by which plants survive and spread. It's a global view of plant evolution at a time when global rules are essential for building climate models and understanding the biosphere." 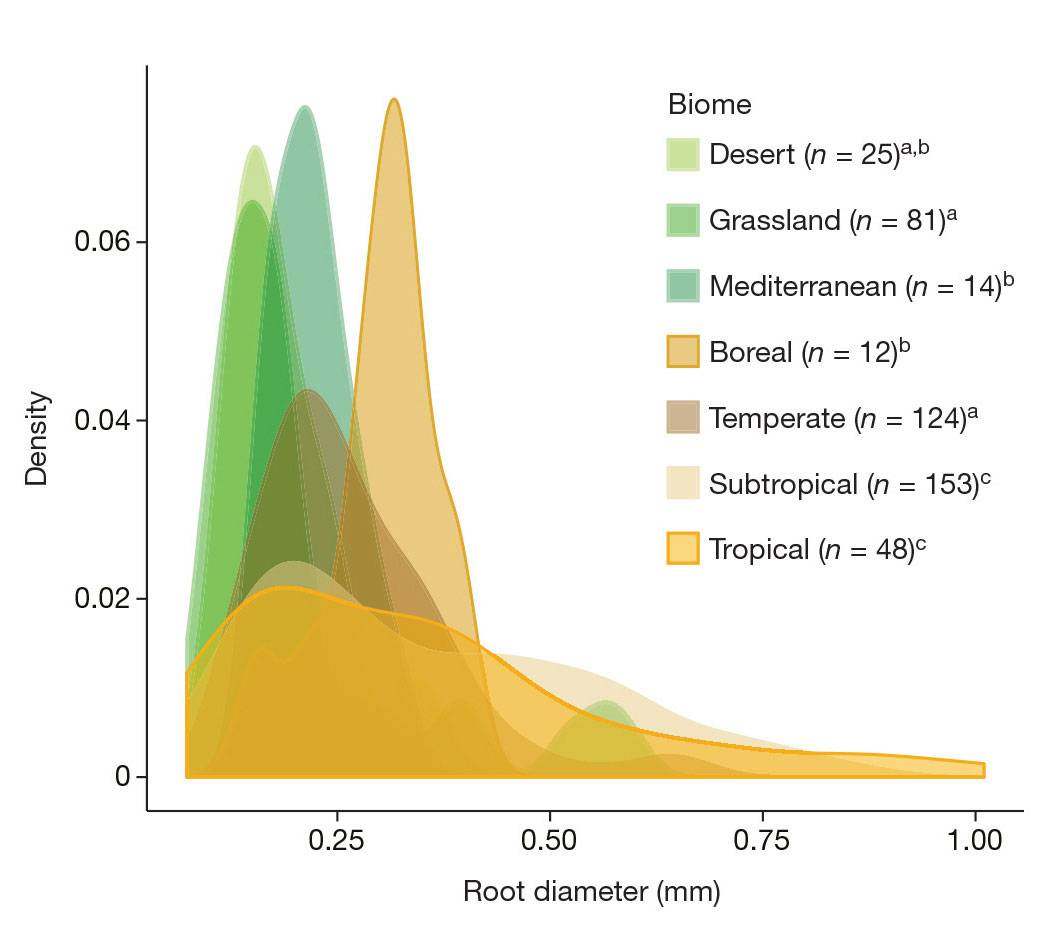 The researchers spent two years examining a database of root traits consisting of 369 species from seven biomes (above): desert, grassland, Mediterranean, boreal, temperate, subtropical and tropical. The researchers found that plants in tropical (light orange) and subtropical biomes (beige) exhibited the largest range of root-tip diameters, from less than 0.25 millimeters up to 1 millimeter. These plants rely on soil fungi to provide nutrients, a similar strategy to that of Earth's earliest land plants. Plants in biomes characterized by poor soil, cold winters and/or infrequent precipitation have a narrow root-diameter range ideal for that environment. The desert (light green) and grassland (green) species studied all had root diameters of less than 0.25 millimeters.

Mingzhen Lu, first Princeton author and a graduate student in Hedin's research group, said that if root traits do in fact determine a plant's ability to withstand a particular environment, these findings could be valuable in conserving endangered species or projecting how plants might adapt to climate change.

"Our findings simplify how we can practically characterize a plant's strategy for obtaining nutrients," Lu said. "Knowing their underlying nutrient strategy will help us know how to preserve them, or know the conditions under which they could or could not survive."

Kurt Pregitzer, the Thomas Reveley Professor and dean of the College of Natural Resources at the University of Idaho, said this work could be especially useful in combating invasive species, which, in a highly mobile world, increasingly threaten biodiversity. Pregitzer is familiar with the research but had no role in it.

The Nature paper is unique for its scale and careful application of scientific methods, Pregitzer said. "This study is the first conducted across a wide range of terrestrial environments and it demonstrates that plant species have evolved root strategies that are conserved within corresponding families, genera and species," he said. "These root traits likely facilitate plant success in highly competitive natural ecosystems."

These data were compiled over the course of a decade in the lab of late co-corresponding author Dali Guo, a professor at CAS' Institute of Geographic Sciences and Natural Resources Research. First author Zeqing Ma is a research associate in Guo's lab and co-author Xiangliang Xu is a colleague of Guo's. The paper's co-authors also included root experts Richard Bardgett, professor of ecology at the University of Manchester in the U.K.; David Eissenstat, professor of woody plant physiology at Pennsylvania State University; and M. Luke McCormack, a research associate at the University of Minnesota.

The researchers found that plants in tropical and subtropical biomes exhibited the largest diameter range for the finest root tips that forage for nutrients, from less than 0.25 millimeters up to 1 millimeter. These thicker-rooted plants employ what the authors call a "conservative" strategy — similar to that of Earth's earliest land plants — that relies on the soil fungi prevalent in wet, warm tropical and subtropical soils to provide nutrients. The researchers refer to nutrient-rich soil in consistently sultry environs as "predictable."

Meanwhile, fine-root diameters in "unpredictable" biomes characterized by poor soil, cold winters and/or infrequent precipitation fall within a narrower range ideal for that environment. For instance, the desert and grassland species studied all had root diameters of less than 0.25 millimeters. Root tips in these biomes evolved to be thinner so they could more efficiently explore soil for every unit of carbon the plant expends, and they have less dependence on symbiotic fungi.

The extensive data the researchers used allowed them to explore the evolution of plant roots to an extent never before possible, Lu said. "Below-ground plant ecology has been understudied, limited by a paucity of data," he said. "Because of that, the governing rule of what's going on below ground has been very poorly known."

"Thus far," Hedin added, "everybody has quite naturally tried to understand how plants are organized by looking at above-ground traits. But our findings do not follow the above-ground theories — that was a surprise."

The study reveals that root and leaf evolution have followed different paths, Pregitzer said. Plant ecologists have known that the form and function of leaves are essential to a plant species' success, but "we did not understand if this was true across the tremendous diversity of plant root systems," he said.

The study resulted from a collaboration between the research groups of co-authors Lars Hedin (center), Princeton professor of ecology and evolutionary biology and the Princeton Environmental Institute, and the late Dali Guo (right), a professor at the Chinese Academy of Sciences (pictured with Jianwei Tang, left, a CAS professor of agroforestry). Guo's group spent 10 years collecting and analyzing roots from across seven biomes globally. Hedin and co-author Mingzhen Lu, a Princeton graduate student, helped analyze this dataset in the context of ideas explored at Princeton that suggest that plants have actively adapted to and shaped their environments over evolutionary time.

"Interestingly, little was known about how plant roots have evolved to facilitate success in their native habitats," Pregitzer said. "Now we know that leaves and roots have responded to different evolutionary selective pressures, and we can start building a better understanding of how root form and function drive plant success within the tremendous biological diversity we see on Earth."

The findings align with ideas explored at Princeton that suggest that plants — rather than being passive features of their environment — have actively adapted to and shaped their environments, Hedin said. He was senior author of a 2015 paper in Nature Plants that suggested that ecosystems take their various forms because plants behave in ways that not only benefit themselves but also determine the productivity and composition of their habitats.

"Over evolutionary time, it's as if plants have actively explored the best strategies to safeguard their own survival," Hedin said. He and Lu brought this perspective to the database put together by their colleagues at CAS.

"We understood from a plant perspective how to bring evolutionary questions to their unique global dataset," Hedin said. "It was this great collaboration where we combined new ideas with years of painstaking fieldwork to produce this great result. It couldn't have happened without both sides."

The paper, "Evolutionary history resolves global organization of root functional traits," was published online by the journal Nature Feb. 21. The work was supported by the Natural Science Foundation of China (grant nos. 31325006, 31530011, and 41571130041).