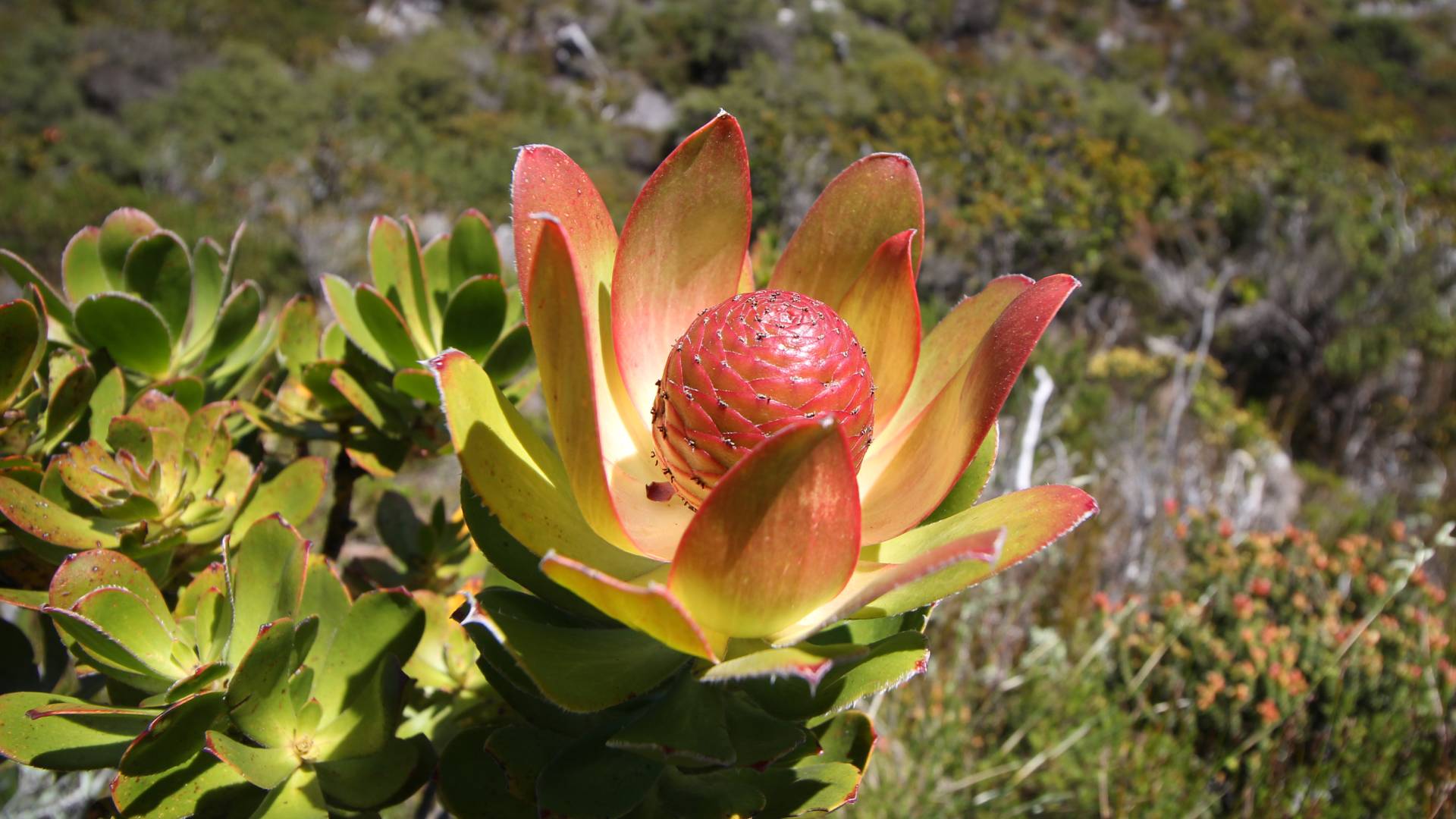 Researchers led by Princetonians Lars Hedin and Mingzhen Lu discovered that roots from the plants of the Fynbos biome in South Africa work below ground to create miserable conditions for would-be invasive species. The hyper-diverse Fynbos includes more than 7,000 plant species (like this Leucadendron strobilinum).

Most of us only think about the easily visible parts of plants — stems, flowers, leaves — but in a new study published in the Proceedings of the National Academy of Sciences, Princeton ecologists Lars Hedin and Mingzhen Lu show that the hidden root systems beneath a South African brushland hold the answer to a biological puzzle. 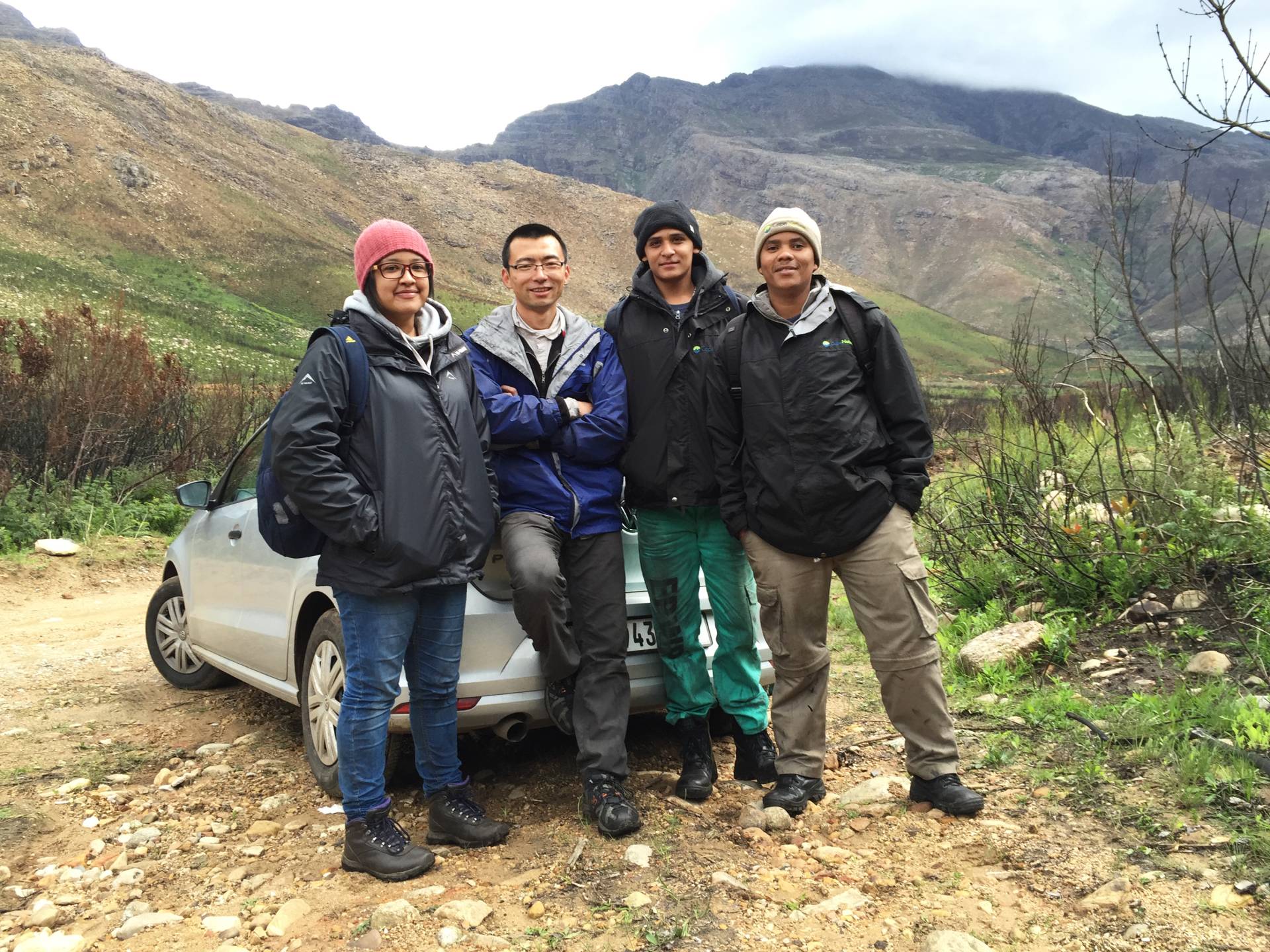 From left: Thaaqirah Joseph, Mingzhen Lu, Keenan Davids and Lyndall Swarts of the field team pose for a photo in the Jonkershoek nature research of Western Cape, South Africa. "Our research in South Africa depends on developing deep and long-standing relationships with South African scientists and support staff," said Hedin, chair of Princeton's Department of Ecology and Evolutionary Biology. "That is an important component of how Princeton does science in the greater community of scientists across the world."

“For the last 400 million years, ever since plants moved from the oceans to colonize land, roots have been the engine driving the water cycle, the nutrient cycle, the carbon cycle, worldwide,” said Lu, lead author of the new study and a 2018 Ecology and Evolutionary Biology Ph.D. graduate who is now the Omidyar Complexity Fellow at the Santa Fe Institute.

Hedin, Princeton’s George M. Moffett Professor of Biology, the department chair for EEB and a professor with the High Meadows Environmental Institute, went a step further: “These are the world’s thinnest roots, and they essentially hold the secret to biodiversity on the biome scale.”

Anyone who has weeded a garden knows that roots can be finer than threads or human hairs. The roots found by Lu, Hedin and their colleagues from the University of Cape Town, the South African Observational Network, Hebrew University of Jerusalem and the Chinese Academy of Sciences, are much, much thinner — so remarkably thin and so long that a single root stretching the length of 15 football fields weighs just one gram, the same as a paperclip. 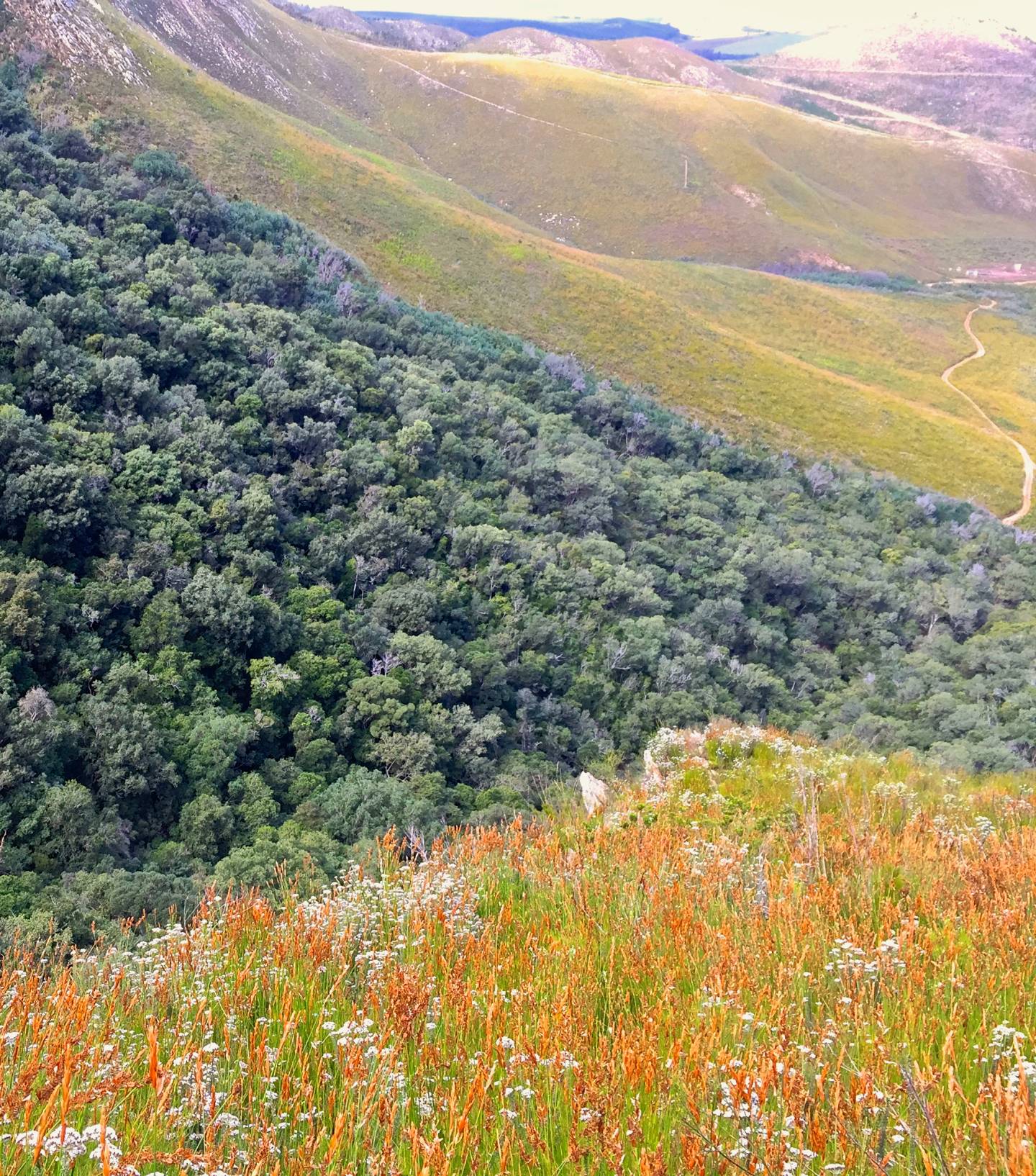 Biologists have long debated the sharp boundary between Fynbos shrublands and Afrotemperate forests that grow side-by-side on the same poor soil in a global biodiversity hotspot region of South Africa.

These roots underlie the Fynbos biome, a dry brushland in South Africa that is the most ecologically rich biome in the world outside of the tropics, with more than 7,000 different species of plants, of which the great majority exist nowhere else. And in a longstanding biological mystery, the Fynbos exists side-by-side with towering trees in the Afrotemperate forest biome that have only a tenth their diversity.

Lu described the startling sharpness of the boundaries between the shrubland and the forest biomes: “In the summer, you are scorched by the sun in the Fynbos, then you take one step into the forest, and you're engulfed by cool humidity and you see moss on the trees,” said Lu. “It’s like a binary switch, zero to one. Boom, you're in another world.”

For over 100 years, ecologists have debated what produces these strikingly contrasting ecosystems. The sharp delineation was even more puzzling because the two biomes share an underlying geology and the same climate and weather conditions. To answer the question, the researchers conducted a four-year experiment, involving 40 plots in which they manipulated soil nutrients and the ability of forest seedlings to compete with the native Fynbos plant community.

They discovered that the two biomes exist as alternative stable states in the same environmental conditions.

“Some systems can exist in different states — like water and ice,” Hedin said. “This makes them especially interesting as models for dramatic change because they can switch from one state to another in response to perturbations, which is especially urgent in a world being stressed by climate change.”

In this environment, the remarkably thin roots are a competitive strategy. They allow the tough but beautiful Fynbos plants to thrive on the poorest soil in the world — an almost pure quartz sand.

Hedin cited Princeton’s rich history in the field of game theory as he described the ecological competition at play in the Fynbos.

“We’re taking principles of game theory into a biological system, and this can explain the emergence of biodiversity patterns,” he said. “What's novel here is that the roots — the world's thinnest roots — actually play a central role in this game. Because if you have them and I try to invade, with my thicker roots, you will capture every nitrogen atom before I can; and there's not many of them in this soil to start with. And it's not just one species doing this, but the whole community has evolved with this strategy, making the soil just too miserable for anything else to survive.”

“This paper breaks startling new ground,” said William Bond, a professor of biological sciences at the University of Cape Town and a co-author. “We now see that it is not the intrinsic soil properties, but plant feedbacks to the soil that create misery for forest saplings. The thin roots of the Fynbos are the belowground weapon creating miserable conditions for nutrient-demanding forest plants. The image of an Erica root spreading across 15 football fields, versus a forest tree root spreading across just a single field, is a vivid illustration of how root geometry can radically influence belowground nutrient acquisition.”

In addition to the root advantages, the Fynbos is also prone to frequent, hot fires that burn accumulated nutrients in the soil. The researchers determined that fires have burned periodically for millions of years, and that the Fynbos plants have evolved ways to weave their lives around fire events. Most Fynbos species time their major life events — flowering, seed dispersal or seed germination — to conditions created by fire.

The forest trees have very different properties focused on fire resistance; regeneration of forest trees is set back by fires, never promoted. The nutrient-hoarding belowground strategy combined with pro-fire adaptations allow the Fynbos plant community to favor its own persistence by modifying its environment. On the other side of the biome divide, the forest is doing the same thing.

Previous research by Hedin and Lu has delved into the oft-invisible strategies plants use to ensure their dominance, which ripple out to produce the mosaic of biomes that support our planet’s various plant and animal species. A 2019 paper they published suggested that the organization of forests worldwide are based on the ancient relationships that plant species forged with soil-dwelling microbes that enhance the uptake of nutrients. A new theory of plant evolution they published in 2018 suggested that the 400 million-year drive of flora across the globe may have been propelled by underground root adaptations that allowed plants to become more efficient and independent as soil quality dropped north and south of the tropics.

The new findings published in PNAS suggest that alternative stable states can be maintained through biotic mechanisms, such as roots competing for rare resources, in addition to the commonly understood abiotic factors like climate and underlying geology. This insight is critical to conserving threatened ecosystems around the world, noted the researchers.

“As humans, we think that bigger is always better,” Hedin said. “’Be as productive as possible.’ ‘Competition makes trees grow bigger.’ That has driven biological theory for more than a century. Our research suggests that there's a completely different strategy here, and it depends on manipulating your environment. Keep the soil miserable, burn any nutrients that try to accumulate. I mean, these plants don't have brains, but over evolutionary time, it's a strategy that works.”

Aaron Sidder with the Santa Fe Institute contributed to this story.