A verdant, nearly roadless place, the Western Amazon in South America may be the most biologically diverse place in the world. There, many people live in near isolation, with goods coming in either by river or air. Turning to crops for profit or sustenance, farmers operate small family plots to make a living. 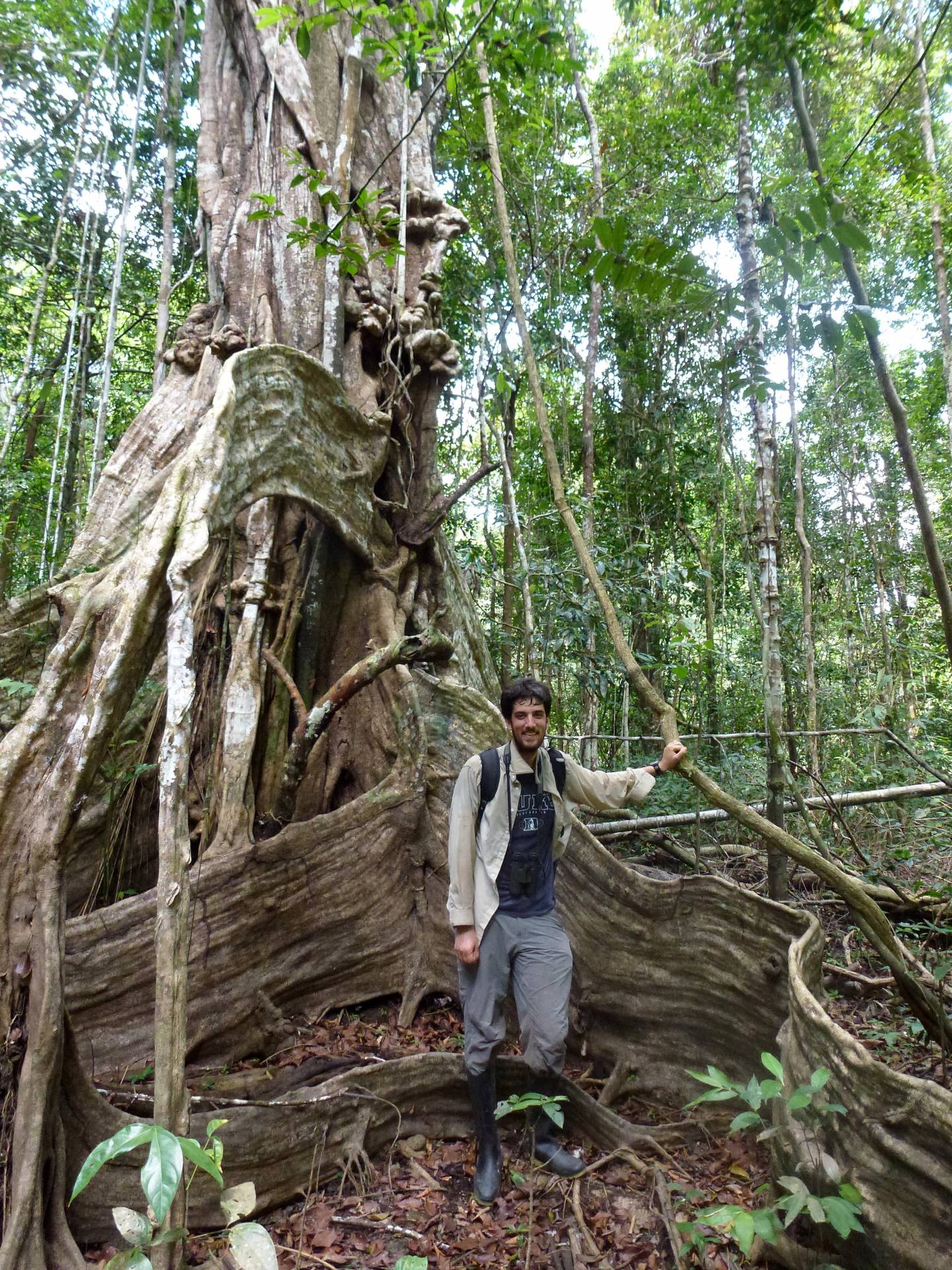 Smallholder agriculture operations pose serious threats to biodiversity, especially in the lush, verdant Western Amazon, according to a recent report from Princeton ecologists David Wilcox and Jacob Socolar. Here, Socolar stands in an intact floodplain forest, one of the research sites.

Unfortunately, these farmers and their smallholder agriculture operations pose serious threats to biodiversity in northeastern Peru, according to a team of researchers led by Princeton University.

After conducting a large-scale study of birds and trees, the researchers found that human activities are destroying this tropical forest wilderness — and the problem will likely only get worse. Their findings were recently published in the journal Conservation Biology.

Many scientists have assumed the impacts of small-scale farming are not too harmful to wildlife, at least not compared with the wholesale clearing of forests for pastures and soybean fields, which is happening in the Eastern Amazon. But this study shows how the far less intrusive actions of small-scale farmers are nonetheless deadly to biodiversity.

“Smallholder agriculture turns out to be a very serious threat to biodiversity, closer in impact to clearing the forests for cattle pastures than we had imagined.” said David Wilcove, a professor of ecology and evolutionary biology, public affairs, and the Princeton Environmental Institute. “What’s worse is that smallholder agriculture is the dominant form of land-use change in Western Amazonia, and it is likely to get more widespread in the coming decades.”

“We wanted to know how tropical biodiversity responds to smallholder agriculture across the wide range of different forest habitats that typify tropical forest landscapes, and the Western Amazon is a good place to ask these questions,” said lead author Jacob Socolar, a 2016 graduate alumnus who conducted the work as a Ph.D. student in Wilcove’s lab. He is now a postdoctoral researcher with the Norwegian University of Life Sciences and the University of Sheffield.

“We called the paper, ‘overlooked biodiversity loss’ because the situation at the landscape scale is worse than we would’ve guessed by studying one habitat at a time,” he said. 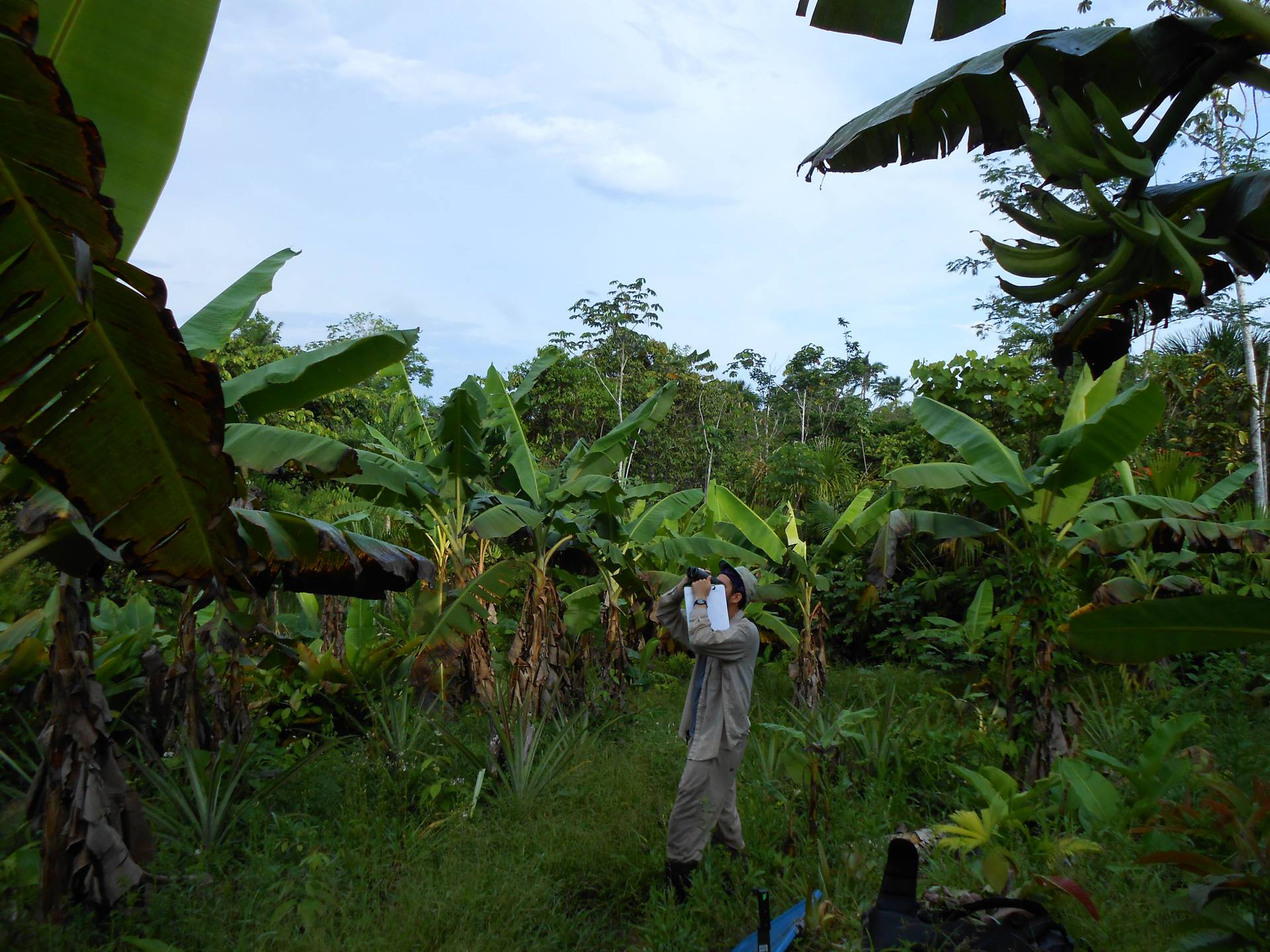 The team conducted their fieldwork in the Amazonian lowlands of Loreto Department in Peru. There, they focused on four habitats — upland forests, floodplain forests, white-sand forests and river islands — where slash-and-burn agriculture is taking place. They also looked at relatively untouched areas of forest as a basis for comparison. 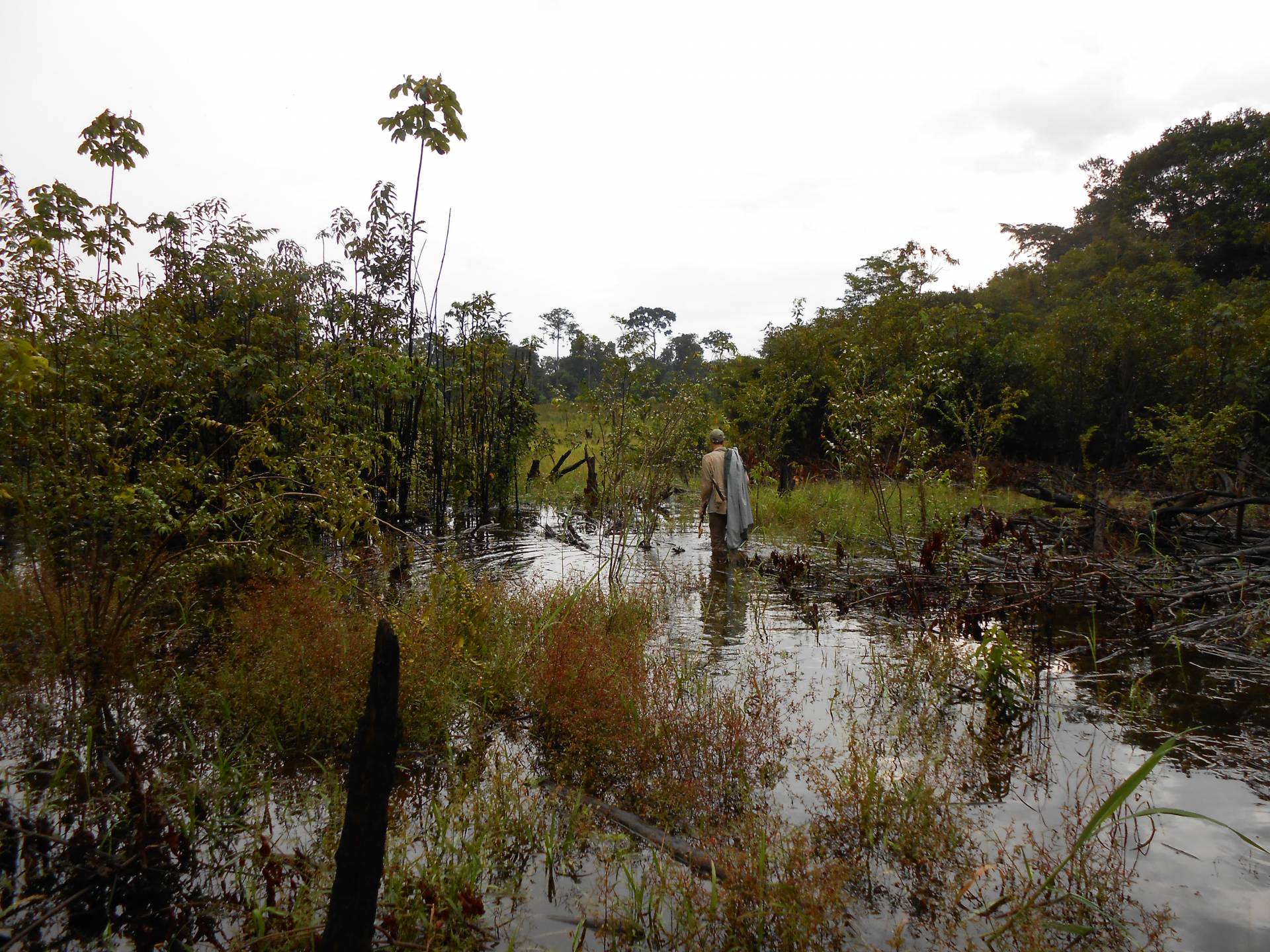 Socolar walks through a smallholder collective’s plantation of an Amazonian fruit called camu-camu. The floodwaters were beginning to rise.

They sampled birds and trees, two groups they felt would be complementary in how they would respond to changes across the land. Likewise, birds are Socolar’s expertise, and Sandoval is a skilled botanist. 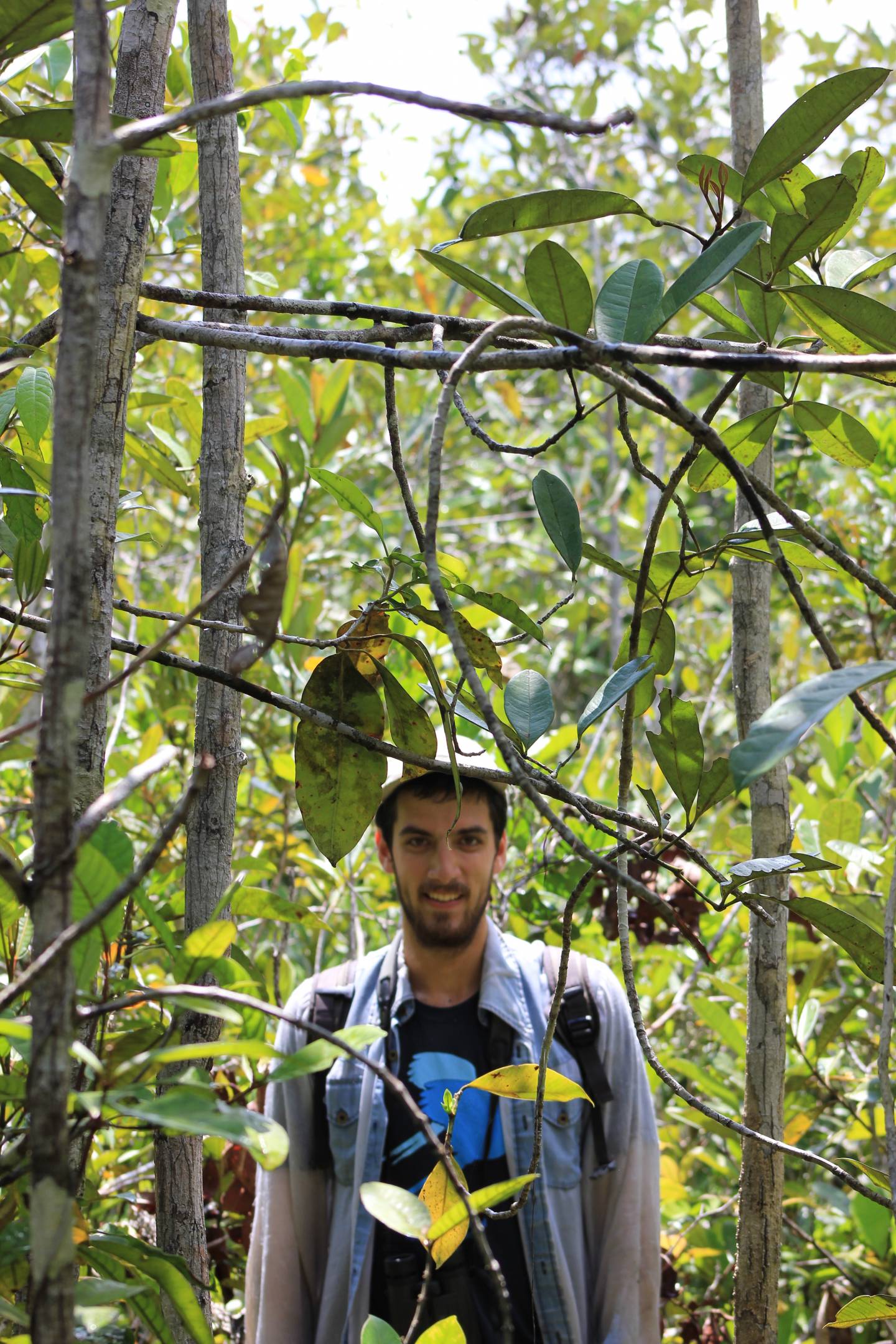 Socolar walks through an intact primary forest on white sands. The poor soils cause the vegetation to be extremely stunted, as seen in this photograph.

Sampling birds can be difficult, Socolar said, especially in this region of Peru, which harbors the greatest number of bird species per acre of anywhere on earth. In 10-minute increments, Socolar recorded all of the bird species in the area based on sight or sound. His final count was 455 bird species, making it among the richest single-observer point-count datasets ever assembled.

Trees are just as tricky, given there are well over 1,000 species in the Peruvian landscape. In their field experiment, the team was able to identify 751 tree species on their study sites.

Different patterns emerged for the birds and trees, creating a seeming contradiction that became a feature of the study, Socolar explained.

In the slashed-and-burned areas, the team found many species of birds. In fact, the farmed sites sometimes had more species than the comparable intact sites. When all sites were tallied, however, the intact sites turned out to have significantly more bird species than the disturbed ones, because all disturbed sites shared a limited pool of species, while intact sites varied in their species composition across different forest habitats.

Trees, on the other hand, exhibited a far less subtle pattern: there were simply far fewer tree species persisting on the cleared land than in the intact forests, and this held even after the scientists used statistical tests to account for the fact that disturbed sites have fewer individual trees than intact forests. With the reduction in the number of tree species in the disturbed sites, the scientists predict there will be fewer insects and other small animals as well, which could have major impacts to the ecosystem. 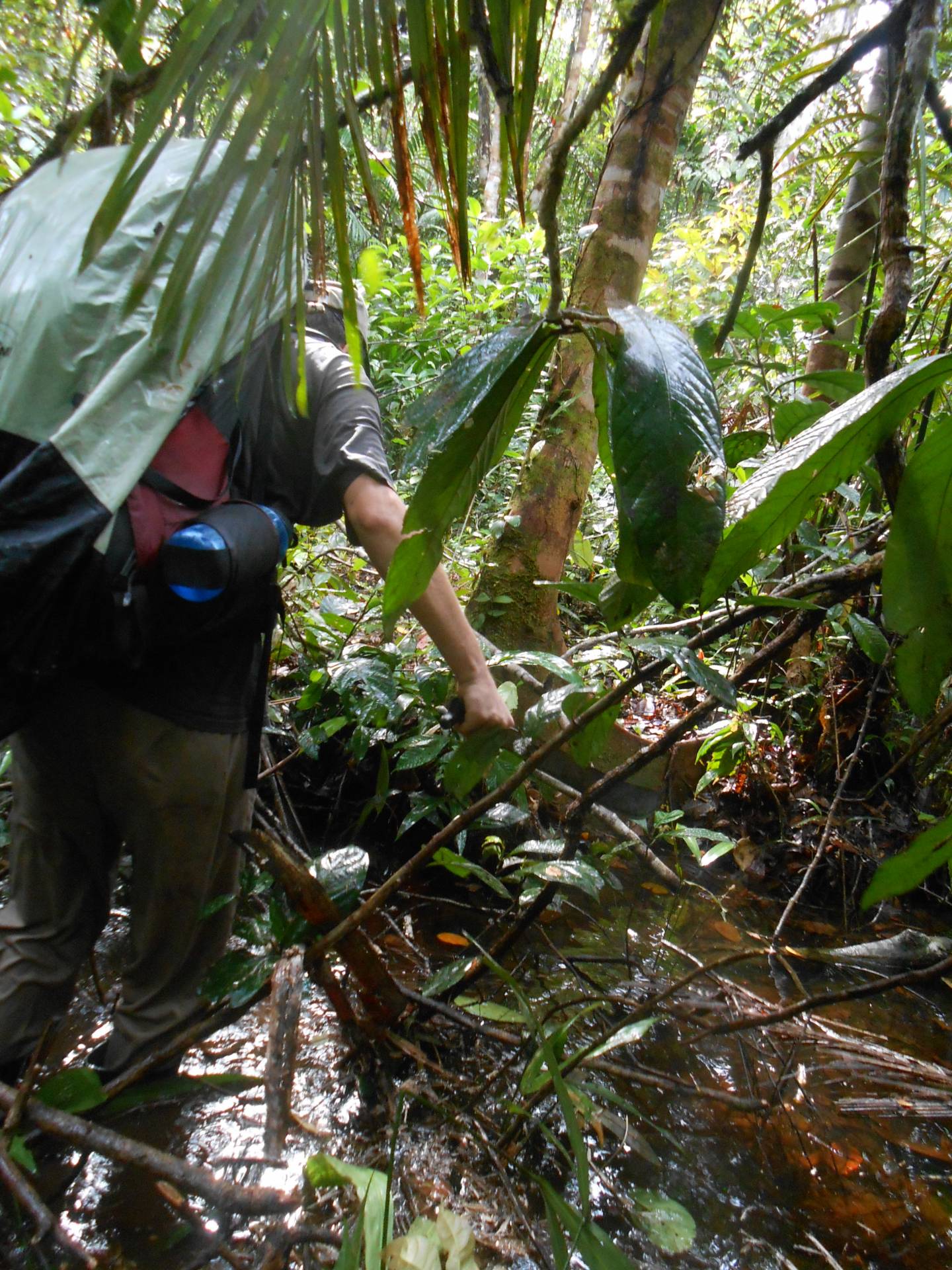 Using a machete, Socolar hacks his way toward an intact upland forest field site. The team camped inside this primary forest so they could conduct point counts before dawn.

The results have significant conservation policy implications. First, this area of the Amazon will probably not remain relatively roadless forever, Socolar said, and with more roads will come more farmers. This means it’s important to carefully manage remote, protected areas to ensure that ongoing infrastructure development does not cause them to be overrun by smallholders. Given the majority of these farmers are poor, there could also be opportunities to link conservation with efforts to improve rural development and decrease poverty.

“Even though smallholder agriculture supports high biodiversity at small spatial scales, we cannot lose vigilance regarding the overall threat posed by smallholder expansion,” Socolar said. “If we do, we pay a price in extinctions. We want this study to serve as a larger warning. It’s probably not just a fluke of the Amazon — these findings could extend to other habitats. We’re lucky to work in a place where there is still plenty of land to go around for both farming and conservation. Being proactive is possible, moral and reasonable.”

The paper, “Overlooked biodiversity loss in tropical smallholder agriculture,” by Jacob B. Socolar, Elvis H. Valderrama Sandoval and David S. Wilcove, was published May 8 in Conservation Biology. This work was funded by the High Meadows Foundation, the American Ornithologists Union, the American Philosophical Society, and the American Museum of Natural History. Socolar was supported by a Graduate Research Fellowship from the National Science Foundation.