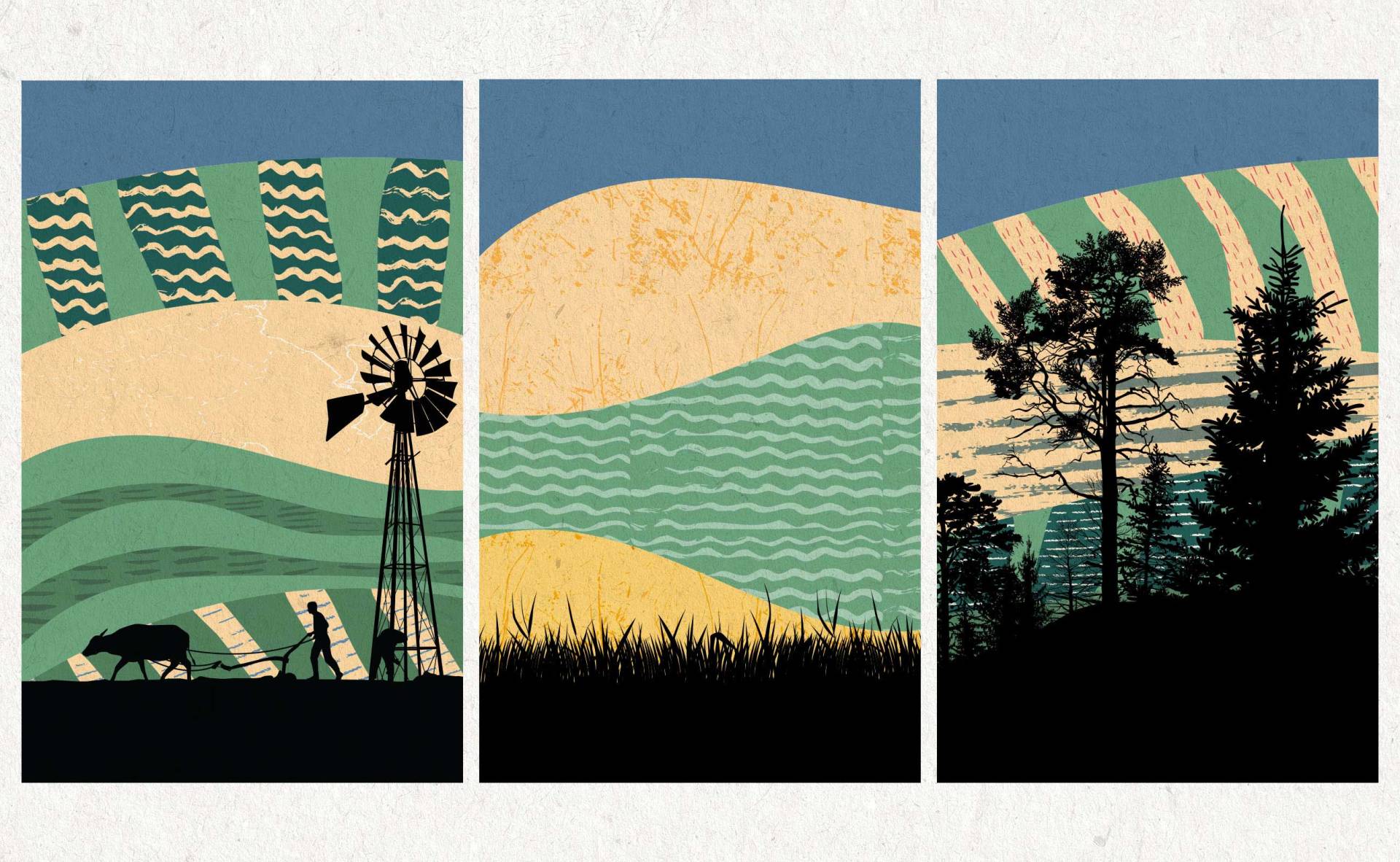 The Institute Woods near Princeton University’s campus comprises 589 acres of serene walking trails and a wooden footbridge enjoyed by hikers, runners, and birdwatchers. Like many forests in New Jersey, this local landmark was a patchwork of farm fields and orchards as recently as 1940 — before regrowing into the verdant escape seen today.

New Jersey is not the only place to experience farmland abandonment, however; it has become a global trend. Around the world, hundreds of millions of acres of land are being abandoned due to what’s known as “rural outmigration,” or people leaving for urban centers.

Some people leave in search of economic prosperity. Others are forced out due to conflict or the effects of climate change. Together with globalization and mechanization, these population shifts are changing the economics of farming in these areas, causing less productive lands to be abandoned. Some of these croplands eventually regenerate into natural habitats, helping both to increase biodiversity and absorb atmospheric carbon.

While environmentalists have been optimistic for this process to provide opportunities to restore habitats and sequester carbon, this is unlikely to happen without policy interventions, according to a new study in Science Advances, which shows that much of the land is eventually recultivated.

“As people move from rural areas into cities, there is a chance for wildlife and the climate to gain ground — literally — as abandoned farms and pastures revert back to forests and grasslands,” said study co-author David Wilcove, professor of ecology and evolutionary biology and public affairs and the High Meadows Environmental Institute (HMEI). “Our work shows that this is not happening because the ‘abandoned’ lands are being rapidly recultivated.”

“Unless countries and policymakers develop better regulations and incentives to allow these lands to recover, this chance to restore ecosystems will not be fully realized,” said lead author Christopher Crawford, a Ph.D. candidate at SPIA who is advised by Wilcove and an alumnus of the Princeton Energy and Climate Scholars program at HMEI. “It will remain a missed opportunity to fight climate change and biodiversity loss.”

Both Crawford and Wilcove are affiliated with the Center for Policy Research on Energy and the Environment, which is based at the Princeton School of Public and International Affairs. The study is the first of a series of papers focused on the implications of cropland abandonment on carbon and biodiversity, which serves as the heart of Crawford’s Ph.D. dissertation. Study co-authors include He Yin of Kent State University and Volker C. Radeloff of the University of Wisconsin-Madison.

To see where croplands were being regenerated — and how long the process lasted — the researchers used cutting-edge annual land-cover maps developed from satellite imagery covering 1987 to 2017. Abandonment and recultivation were estimated by tracking individual parcels of cropland through time.

The research team studied images from 11 sites across four continents, including locations in the United States, Brazil, Bosnia and Herzegovina, China, Iraq, Kazakhstan, Belarus, and Russia. Across these regions, cropland was abandoned for reasons ranging from war and conflict to socioeconomic and environmental factors.

Some of the sites were located in the former Soviet Union and abandoned following the geopolitical upheaval of the union’s collapse. Meanwhile, China has active reforestation programs that incentivize the regrowth of forests on marginal agricultural land and is experiencing increasing amounts of rural emigration, like other countries included in the study.

The degree to which cropland abandonment offers environmental opportunities depends on how much is abandoned and how long it stays that way. Unfortunately, after tracking abandonment year by year, the researchers found that a substantial amount of the land they studied was eventually recultivated.

While it varied across sites, land in the former Soviet Union experienced the highest levels of recultivation. Meanwhile, in China’s Shaanxi and Shanxi provinces, land was left abandoned a bit longer, perhaps thanks to the central government’s “Grain for Green Program” that provides financial incentives to reforest cropland.

Overall, most cropland reviewed in the study was left abandoned for only about 14 years on average, which is not long enough to offset substantial amounts of carbon, or become high-quality habitat for wildlife, the researchers said. Within 30 years, their models predict that around 50% of abandoned croplands will be recultivated. In the process, significant environmental benefits will be lost. The recultivation of abandoned croplands at these sites resulted in more than 30% less area abandoned and 35% less carbon sequestered by 2017.

The findings from the Shaanxi and Shanxi provinces, however, provide evidence that incentive programs can succeed. The researchers also proposed that abandoned fields, especially on cropland not necessary for food production, should be turned into protected areas. Ecosystem service programs could provide payments to landowners to abandon their croplands. Or steps could be taken to support sustainable long-term cultivation of certain sites so there is less turnover among fields.

This study was made possible through funding from HMEI at Princeton University and the NASA Land-Cover and Land-Use Change Program (grant no. 80NSSC18K0343).

The paper, “Rural Land Abandonment Is Too Ephemeral to Provide Major Benefits for Biodiversity and Climate,” was published online May 25 in Science Advances.

Brittany Murray contributed to this story.