While humans have three color cones in the retina sensitive to red, green and blue light, birds have a fourth color cone that can detect ultraviolet light. A Princeton-led research team trained wild hummingbirds, like this male broad-tailed hummingbird, to perform a series of experiments that revealed that the tiny birds also see combination colors like ultraviolet+green and ultraviolet+red.

“Humans are color-blind compared to birds and many other animals,” said Mary Caswell Stoddard, an assistant professor in the Princeton University Department of Ecology and Evolutionary Biology. Humans have three types of color-sensitive cones in their eyes — attuned to red, green and blue light — but birds have a fourth type, sensitive to ultraviolet light. “Not only does having a fourth color cone type extend the range of bird-visible colors into the UV, it potentially allows birds to perceive combination colors like ultraviolet+green and ultraviolet+red — but this has been hard to test,” said Stoddard. 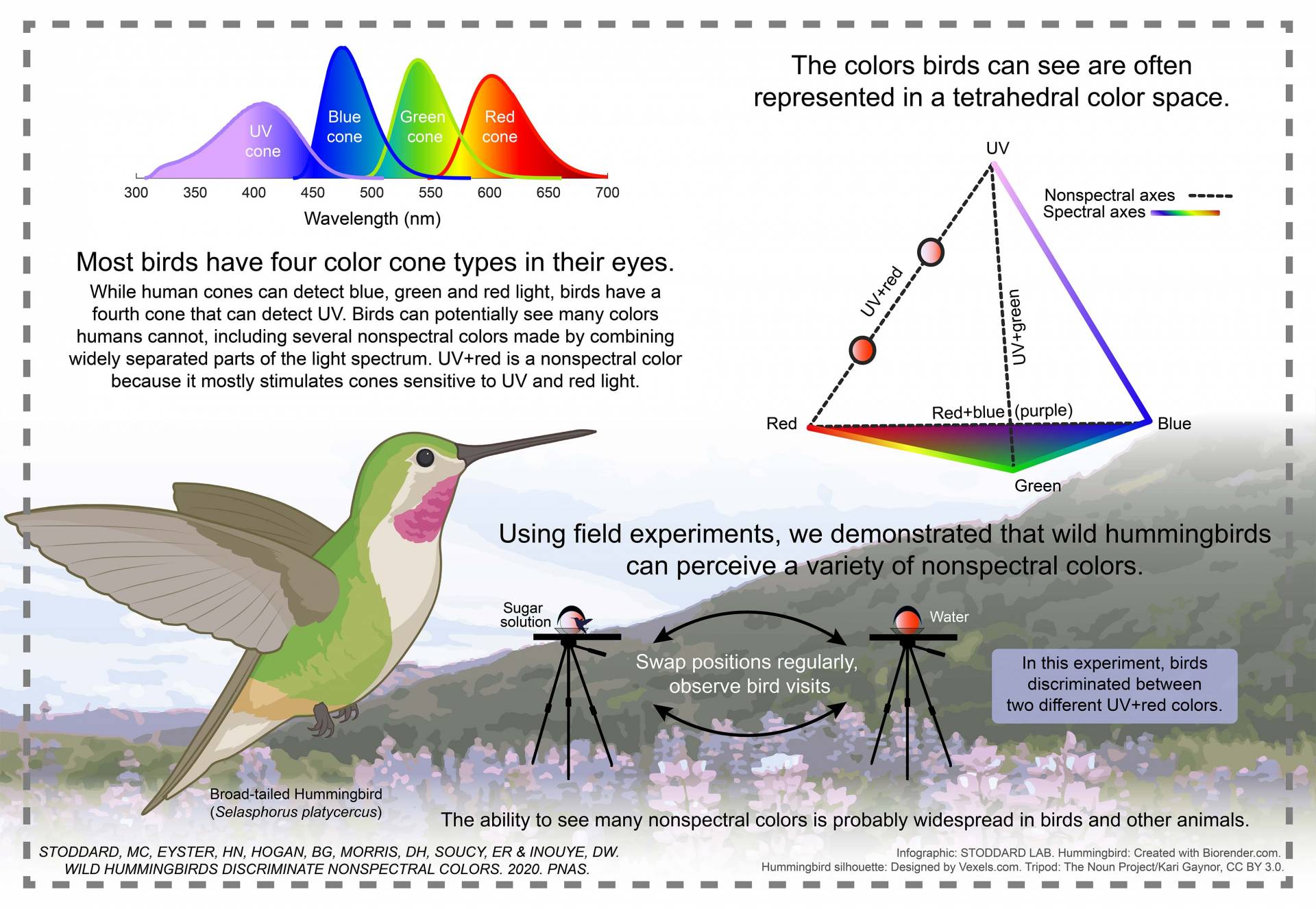 “Most detailed perceptual experiments on birds are performed in the lab, but we risk missing the bigger picture of how birds really use color vision in their daily lives,” Stoddard said. “Hummingbirds are perfect for studying color vision in the wild. These sugar fiends have evolved to respond to flower colors that advertise a nectar reward, so they can learn color associations rapidly and with little training.”

Stoddard’s team was particularly interested in “nonspectral” color combinations, which involve hues from widely separated parts of the color spectrum, as opposed to blends of neighboring colors like teal (blue-green) or yellow (green-red). For humans, purple is the clearest example of a nonspectral color. Technically, purple is not in the rainbow: it arises when our blue (short-wave) and red (long-wave) cones are stimulated, but not green (medium-wave) cones. 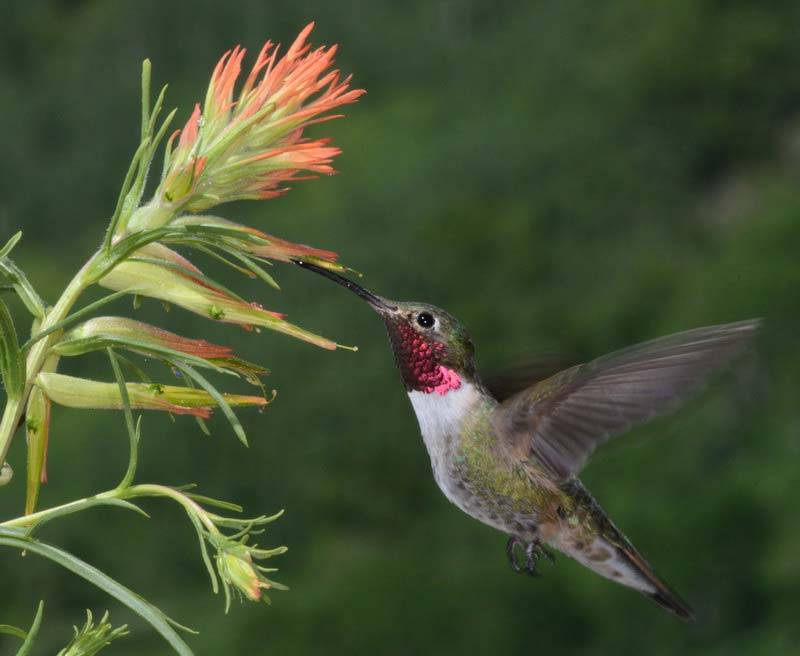 To other birds, this male’s magenta throat feathers likely appear as an ultraviolet+purple combination color.

Stoddard and her colleagues designed a series of experiments to test whether hummingbirds can see these nonspectral colors. Their results appear June 15 in the Proceedings of the National Academy of Sciences.

The research team, which included scientists from Princeton, the University of British Columbia (UBC), Harvard University, University of Maryland and RMBL, performed outdoor experiments each summer for three years. First they built a pair of custom “bird vision” LED tubes programmed to display a broad range of colors, including nonspectral colors like ultraviolet+green. Next they performed experiments in an alpine meadow frequently visited by local broad-tailed hummingbirds, which breed at the high-altitude site.

Each morning, the researchers rose before dawn and set up two feeders: one containing sugar water and the other plain water. Beside each feeder, they placed an LED tube. The tube beside the sugar water emitted one color, while the one next to the plain water emitted a different color. The researchers periodically swapped the positions of the rewarding and unrewarding tubes, so the birds could not simply use location to pinpoint a sweet treat. They also performed control experiments to ensure that the tiny birds were not using smell or another inadvertent cue to find the reward. Over the course of several hours, wild hummingbirds learned to visit the rewarding color. Using this setup, the researchers recorded over 6,000 feeder visits in a series of 19 experiments.

Even though hummingbirds can perceive nonspectral colors, appreciating how these colors appear to birds can be difficult. “It is impossible to really know how the birds perceive these colors. Is ultraviolet+red a mix of those colors, or an entirely new color? We can only speculate,” said Ben Hogan, a postdoctoral research associate at Princeton and a co-author of the study.

“To imagine an extra dimension of color vision — that is the thrill and challenge of studying how avian perception works,” said Stoddard. “Fortunately, the hummingbirds reveal that they can see things we cannot.”

“The colors that we see in the fields of wildflowers at our study site, the wildflower capital of Colorado, are stunning to us, but just imagine what those flowers look like to birds with that extra sensory dimension,” said co-author David Inouye, who is affiliated with the University of Maryland and RMBL.

The research team studied hummingbirds at the Rocky Mountain Biological Laboratory in Gothic, Colorado. The high-altitude site, at an elevation of nearly 10,000 feet, is home to many broad-tailed hummingbirds. The research team included (from left): Prof. Mary “Cassie” Stoddard; Cole Morokhovich of the Class of 2020; Harold Eyster, a Ph.D. student at the University of British Columbia; and postdoctoral research associate Ben Hogan. Stoddard, Eyster and Hogan are authors on the paper appearing this week in PNAS.

Finally, the research team analyzed a data set of 3,315 feather and plant colors. They discovered that birds likely perceive many of these colors as nonspectral, while humans do not. That said, the researchers emphasize that nonspectral colors are probably not particularly special relative to other colors. The wide variety of nonspectral colors available to birds is the result of their ancient four color-cone visual system.

“Tetrachromacy — having four color cone types — evolved in early vertebrates,” said Stoddard. “This color vision system is the norm for birds, many fish and reptiles, and it almost certainly existed in dinosaurs. We think the ability to perceive many nonspectral colors is not just a feat of hummingbirds but a widespread feature of animal color vision.”