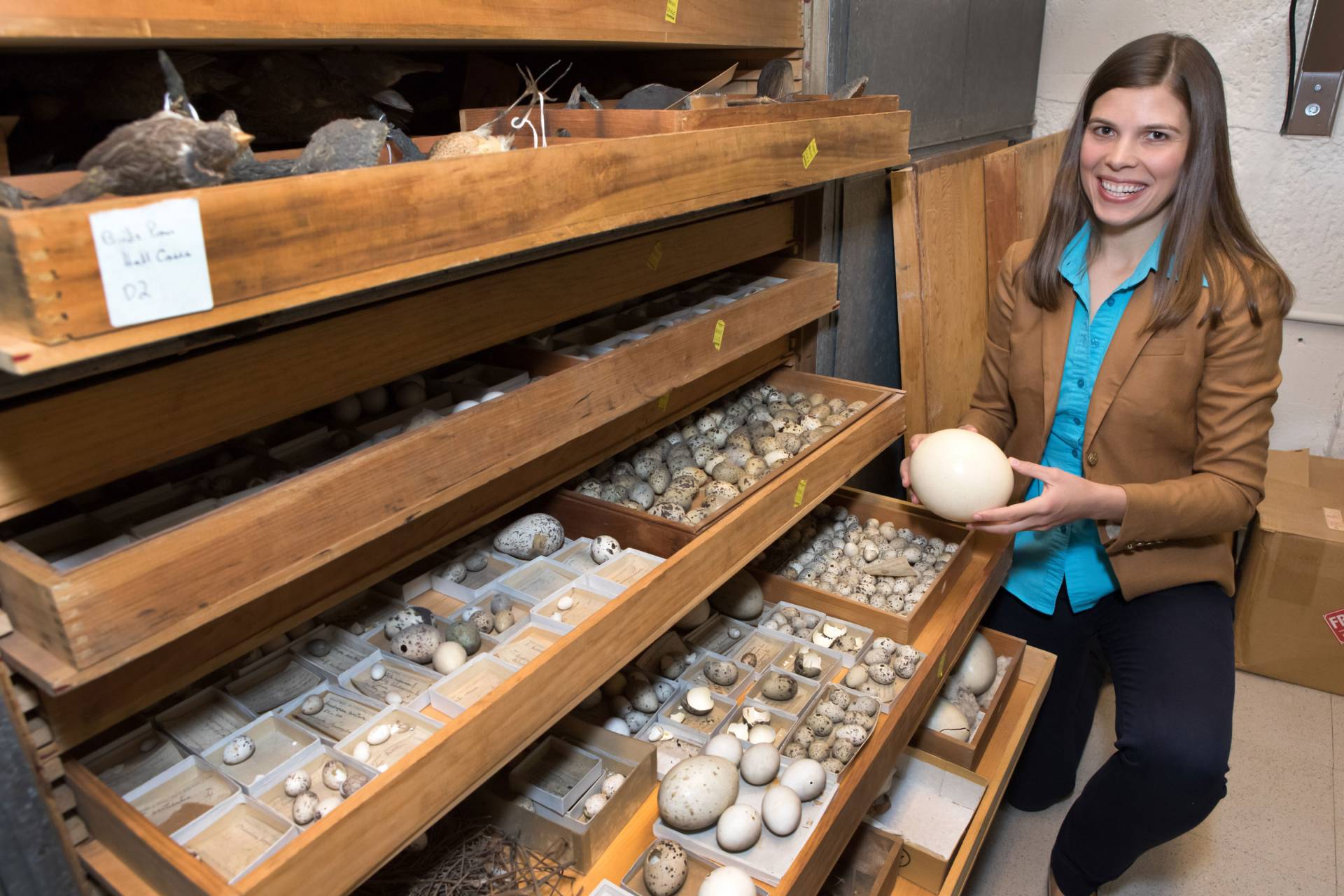 Dexter Palmer for the Office of Communications

Mary Caswell Stoddard, an assistant professor in the Department of Ecology and Evolutionary Biology at Princeton, proposes a far-ranging hypothesis regarding how and why bird eggs acquire their shapes. Her research, an interdisciplinary collaboration with multiple authors, suggests that the shape of an egg for a given bird species may be driven in part by physiological features related to its capability for flight. Above, Stoddard holds an ostrich egg, the largest egg produced by a bird today.

Mary Caswell Stoddard, an assistant professor in Princeton’s Department of Ecology and Evolutionary Biology, proposes a far-ranging hypothesis regarding how and why bird eggs acquire their shapes. Her research, an interdisciplinary collaboration involving multiple authors, suggests that the shape of an egg for a given bird species may be driven in part by physiological features related to its capability for flight.

In a study published June 22 in the journal Science, lead author Stoddard and colleagues suggest that the correlation may have a mechanistic explanation: it may be that birds with a strong flight capability have developed aerodynamic body shapes that have influenced the configuration of these birds’ internal organs, including the reproductive system.

This would in turn influence the shape an egg acquires as it moves through a bird’s oviduct, the tube through which an egg passes after leaving the ovary. In the scenario Stoddard and her team propose, the egg's flexible membrane, not the hard shell, determines the egg's final shape. The egg adopts a signature shape due to the membrane’s properties as well as pressures in the isthmus, the portion of the oviduct positioned just before the shell gland (where the membrane is coated with a layer of calcium carbonate that hardens to form its shell).

An egg that tends toward asymmetry or ellipticity might pass more easily through the narrow oviduct of a bird with an aerodynamically streamlined body, while still having enough volume to hold the nutrients necessary to support an embryo.

Stoddard and her team arrived at their hypothesis through an analysis of the shapes of over 49,000 eggs, which represented approximately 14 percent of the species of birds that exist worldwide.

Stoddard worked with a digitized version of the egg collection of the Museum of Vertebrate Zoology at the University of California-Berkeley — this collection is one of the largest in North America, with an assortment of eggs collected worldwide between 1850 and 1950.

A custom-coded piece of software called the “Eggxtractor” — “you’ve got to have bad puns if you work on eggs,” said Stoddard — allowed her and her team to quickly examine tens of thousands of digital images of the collection’s eggs and determine their shapes. The dataset provided the inspiration for a biophysical model of egg shaping.

“The question of how eggs get their shapes is really wide open,” said Stoddard. “Now that we’ve analyzed an enormous dataset of eggs, we can ask the question of whether there is a mechanistic model that makes sense, that can generate all the diversity in shape that we have observed. And the answer is yes. … Just by adjusting the membrane’s properties and the oviduct’s pressure, we can derive the entire world of egg shapes. And we think it’s biologically realistic, what we’ve proposed.”

In addition, the dataset, once assembled and analyzed in an evolutionary context, provided strong evidence of a correlation between an egg’s asymmetry and ellipticity and a bird’s “hand-wing index,” a reliable measurement of a species’ flight capability. 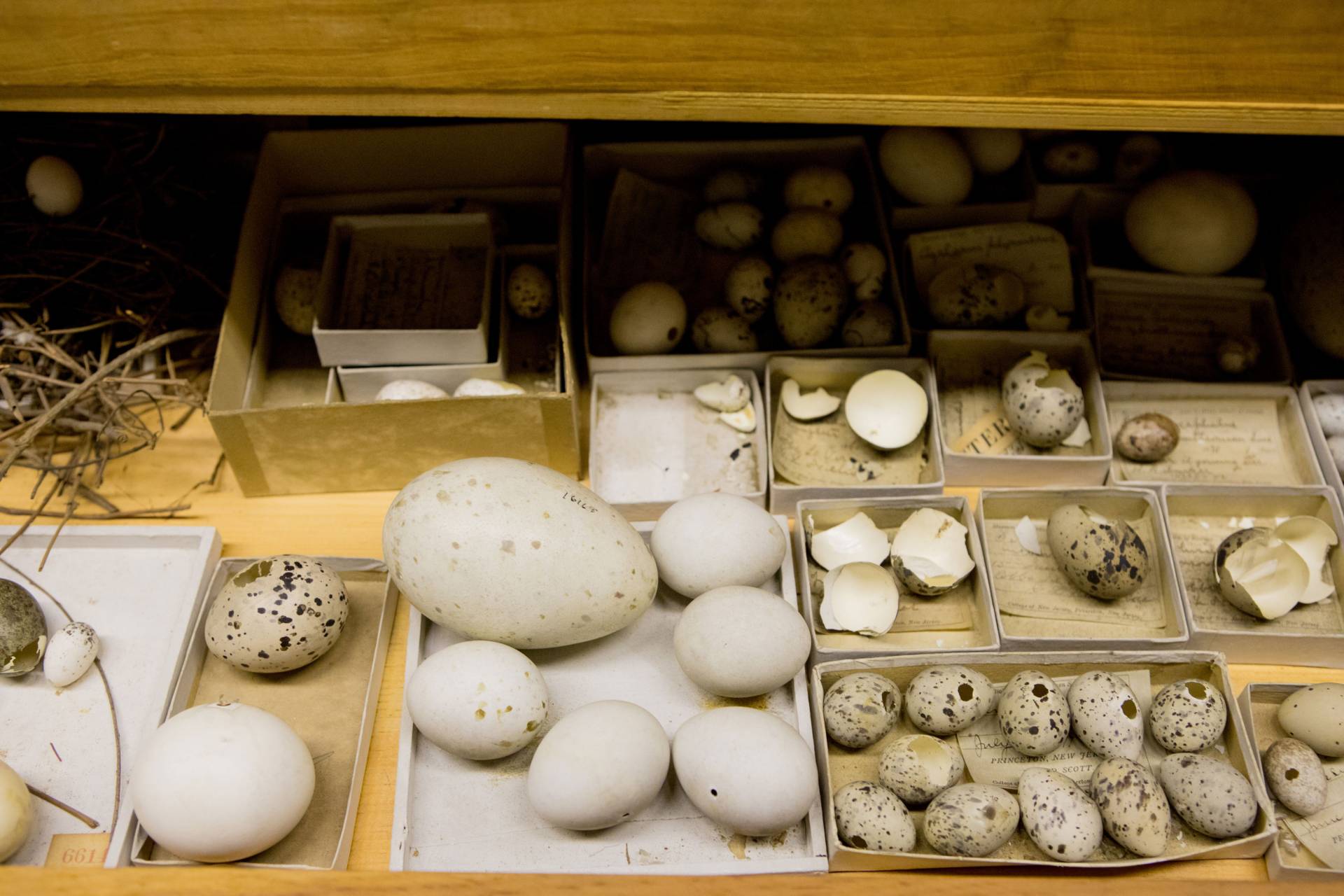 Stoddard and her team analyzed the shapes of over 49,000 bird eggs from a digitized collection at the Museum of Vertebrate Zoology at the University of California-Berkeley, representing 14 percent of the species of birds that exist worldwide. Shown at left are some eggs from a collection at Princeton.

Bird eggs can exhibit a variety of shapes, ranging from the nearly spherical dimensions of the egg of the brown hawk-owl of south Asia to the egg of the common murre of the North Atlantic and North Pacific, which is bulbous and pointed. It is generally held that processes of evolution selected for egg shapes that would allow species to thrive, perhaps by making eggs easier to produce, or by permitting the greatest number of eggs to survive to hatching in different environments.

A perfectly spherical egg would have the lowest possible ratio of surface area to volume, and would therefore require the least possible material to create its shell. An egg that is pointed on one end will roll in a curve that keeps it near the other eggs in its nest, rather than moving in a straight line that might send it off a cliff edge.

“While hypotheses such as these might be true for some birds,” said Stoddard, “no broad study had yet been conducted to see if these ideas would hold up at a large scale — across all birds generally.”

Claire Spottiswoode of the University of Cambridge, who is familiar with Stoddard’s research but had no role in it, described Stoddard’s work as “a major leap forward in explaining how and why [egg shape] diversity has evolved. She [Stoddard] and her interdisciplinary team have given us both a strong hypothesis for how this diversity of shapes physically arises in the female’s reproductive tract, and an amazingly comprehensive body of evidence — sourced from nearly 50,000 eggs — in support of why natural selection has favored such a stunning diversity of forms. Their findings will be an exciting surprise for many of us.”

What are Stoddard’s next steps for research? “We’d like to understand if and how the mechanistic model is really working,” she said. She is beginning an examination of variation in egg membrane properties across bird species; another promising line of analysis involves examining museum specimens of birds to see if the dimensions of their pelvises and oviducts can also be correlated with egg shape.

“We have ideas about how the bird body should be modified for flight,” said Stoddard, “but now we can actually look at museum specimens and take measurements of the pelvis, and see if it’s true that birds with small pelvises lay really elliptical or asymmetrical eggs. I’d say, on the whole, that eggs are surprising and interesting for reasons I couldn’t have imagined, getting into these questions years ago. They’re endlessly fascinating.”

Other authors of the paper, “Avian egg shape: Form, function and evolution,” are Ee Hou Yong of Nanyang Technological University, Singapore; Derya Akkaynak of the University of Haifa, Israel, and the Interuniversity Institute of Marine Sciences, Israel; Catherine Sheard of the University of Bristol, UK; Joseph Tobias of Imperial College London, UK; and L. Mahadevan of Harvard University, USA.

The major funding sources for this work include Princeton University, the L’Oréal USA For Women in Science Fellowship, the L’Oréal-UNESCO International Rising Talents Fellowship, the Harvard Society of Fellows, the Milton Fund, Nanyang Technological University, the Oxford Clarendon Fund, the Fulbright Commission, the Natural Environment Research Council, the MacArthur Foundation and the Radcliffe Institution.