Princeton researchers discovered that brown anole lungs develop quickly and much more simply than human lungs, offering a simple model that engineers can use to develop advanced biotechnology for regenerating and engineering tissue.

When it comes to studying lungs, humans take up all the air, but it turns out scientists have a lot to learn from lizards.

A new study from Princeton University shows how the brown anole lizard solves one of nature’s most complex problems — breathing — with elegant simplicity. Whereas human lungs develop over months and years into baroque tree-like structures, the anole lung develops in just a few days into crude lobes covered with bulbous protuberances. These gourd-like structures, while far less refined, allow the lizard to exchange oxygen for waste gases just as human lungs do. And because they grow quickly by leveraging simple mechanical processes, anole lungs provide new inspiration for engineers designing advanced biotechnologies.

“Our group is really interested in understanding lung development for engineering purposes,” said Celeste Nelson, the Wilke Family Professor in Bioengineering and the principal investigator of a study published Dec. 22 in the journal Science Advances. “If we understand how lungs build themselves, then perhaps we can take advantage of the mechanisms mother nature uses to regenerate or engineer tissues.”

While avian and mammalian lungs develop great complexity through endless branching and complicated biochemical signaling, the brown anole lung forms its relatively modest complexity through a mechanical process the authors likened to a mesh stress ball — the common toy found in desk drawers and DIY videos. This study is the first to look at the development of a reptile lung, according to the researchers.

The anole lung starts a few days into development as a hollow, elongated membrane surrounded by a uniform layer of smooth muscle. During development, the lung cells secrete fluid, and as they do so the inner membrane slowly inflates and thins like a balloon. The pressure pushes against the smooth muscle, causing it to tighten and spread apart into fiber bundles that ultimately form a honeycomb-shaped mesh. Fluid pressure continues pushing the stretchy membrane outward, bulging through the gaps in the sinewy mesh and forming fluid-filled bulbs that cover the lung. Those bulges create lots of surface area where the gas exchange occurs. 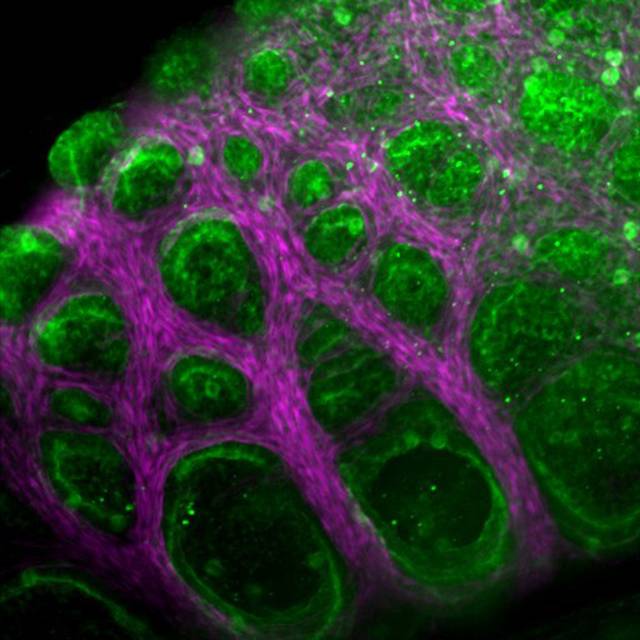 The lungs of a brown anole develop through a physical process that the researchers liken to a stress ball — the common toy that can be squeezed into countless bulging shapes. In anole lungs, fluid pressure pushes a stretchy inner membrane (green) through a muscular mesh (pink), forming fluid-filled bulges with abundant surface area where gas exchange occurs. These simple structures allow the lizard to exchange oxygen for waste gases, just as human lungs do, but they grow in just a few days, while human lungs take months to develop fully.

The whole process takes less than two days and is complete within the first week of incubation. After the lizard hatches, air comes in at the top of the lung, swirls around the cavities, then flows back out.

For engineers looking to crib nature’s shortcuts on behalf of human health, this speed and simplicity make for a radical new design paradigm. The study also breaks new ground for scientists to study reptile development in far greater detail.

Eager to unsettle those assumptions, she guided her team to ask fundamental questions about how the lungs of different classes of vertebrates build themselves. “The architecture of the bird lung is just so incredibly different from that of the mammalian lung,” Nelson said. For example, instead of a diaphragm, birds have air sacs embedded throughout their bodies that act as bellows.

To adapt the exquisite complexity of avian lungs for tools that could benefit human health, Nelson believed science needed to go even deeper. Nature had solved the gas-exchange problem with two radically different systems. How were they linked? And might there be other systems, too? This led her team back in evolutionary time in search of a common origin. And there sat the reptile, doing what reptiles do so well: hiding in plain sight.

When Michael Palmer joined the lab as a graduate student, he took up the challenge of organizing this study — quite literally — from the ground up. Alligators proved too ornery. Green anoles refused to breed. After years of preliminary work, Palmer took a trip to Florida to capture wild brown anoles in late 2019. He and his colleague traipsed through the mud of a suburban park, turning over rocks and leaves along the edge of the woods. They used traps made of dental floss to capture about a dozen individuals and place them each in their own small terrarium. They then drove the animals from north Florida back to Princeton, where the University’s veterinarians and animal resources staff helped the team establish a permanent anole facility.

That’s when Palmer started looking at the eggs to map the organisms’ lung development. Working with Andrej Košmrlj, an assistant professor of mechanical and aerospace engineering, as well as graduate student Anvitha Sudhakar, Palmer used his observations to build a computational model of the lung and understand its physics.

“We were curious if we could learn anything about the basics of lung development from studying such a simple lung,” said Palmer, who earned his Ph.D. in chemical and biological engineering earlier this year. He had seen evidence that smooth muscle played a sculpting role in other systems, but in this study, he was able to observe how that worked directly.

“The lizard lung develops using a very physical mechanism,” Palmer said. “A cascade of pressure-induced tensions and pressure-induced buckling.” In less than two days, the organ goes from flat balloon to fully formed lung. And the process is simple enough that Palmer could use his computational model to build a working replica in the lab. While the engineered system didn’t match the living system’s full complexity, it got close.

The researchers cast the membrane using a silicone material called Ecoflex, commonly used in the film industry for makeup and special effects. They then encased that silicone with 3D-printed muscle cells to create the same kinds of corrugations in the inflated silicone that Palmer had found in the living organ. They met technical barriers that limited their creation’s verisimilitude, but in the end, it was uncannily similar to the living organ.

Those humble backyard lizards had inspired a new kind of artificial lung and a framework that engineers can refine toward unknowable future ends.

“Different organisms have different organ structures. That’s beautiful, and we can learn a lot from it,” Nelson said. “If we appreciate that there’s a lot of biodiversity that we can’t see, and we try to take advantage of it, then we as engineers will have more tools to tackle some of the major challenges that face society.”

“Stress ball morphogenesis: How the lizard builds its lung” appears in the Dec. 22 issue of Science Advances (DOI: 10.1126/sciadv.abk0161). The research was supported by funding from the National Institutes of Health, the National Science Foundation, the Eric and Wendy Schmidt Transformative Technology Fund and the Howard Hughes Medical Institute. Additional authors include Bryan A. Nerger, Katharine Goodwin, Sandra B. Lemke, Pavithran T. Ravindran, and Jared E. Toettcher, associate professor of molecular biology.