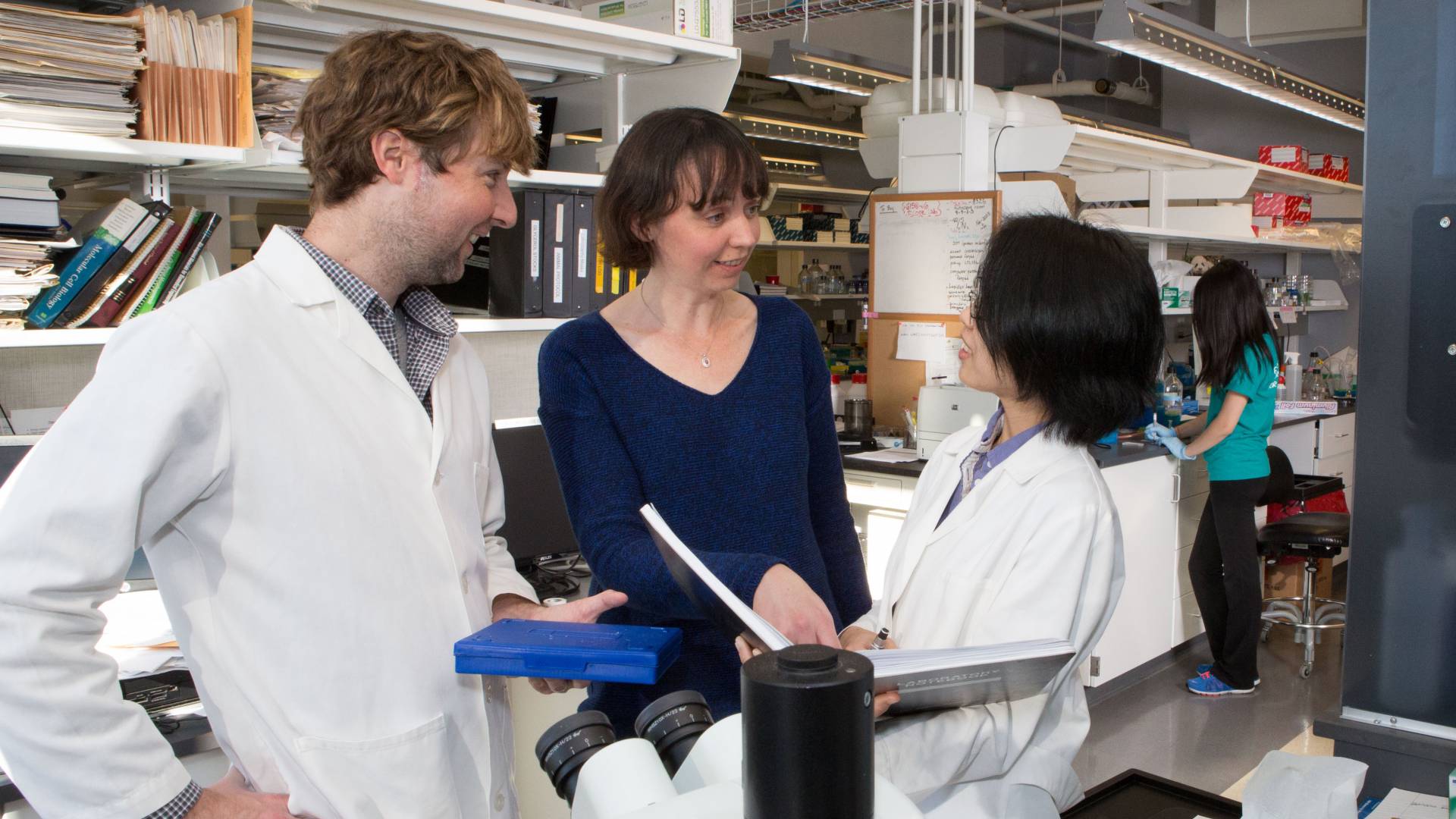 Celeste Nelson (center), a professor of chemical and biological engineering at Princeton, worked with a research team including Victor Varner and Mei Fong-Pang to examine how fluid pressure helps control the rate of development of embryonic lungs.

It is a marvel of nature: during gestation, multiple tissue types cooperate in building the elegantly functional structures of organs, from the brain’s folds to the heart’s multiple chambers. A recent study by Princeton researchers explored this process in lungs and offers insights into the formation of their delicately branching, tree-like airways.

Working with mouse tissue, the research team discovered that fluid pressure felt by embryonic lungs helps control the rate of development of the organ. This pressure coordinates the contraction of the smooth muscles girding the airways, which in turn spurs the sprouting of new branches throughout the fledgling lung.

The takeaway: changes in fluid pressure can boost, or hinder, the lungs’ maturation. The findings therefore suggest a potential treatment avenue for disorders including pulmonary hypoplasia, where newborns suffer from poor oxygenation owing to underdeveloped lungs.

“Our study shows that the pressure of the fluid within the developing lung regulates the organ’s rate of development,” said Celeste Nelson, a professor of chemical and biological engineering at Princeton and lead author of the paper, which was published in the journal Development on Dec. 1, 2017. “In this way, the pulmonary pressure sends a signal to the muscles in tuning the timing of the lung’s growth.”

Nelson’s lab is at the forefront of articulating a novel paradigm in biology in which physical forces — and not just hardwired genes running a closed developmental program — fundamentally contribute to forming complex structure. "Genes provide a blueprint for development of cells and tissues," said Nelson. "But these biological structures must still obey the laws of physics."

Former Nelson lab member Jason Gleghorn, now an assistant professor of biomedical engineering at the University of Delaware, and Mei-Fong Pang, a postdoctoral fellow at Princeton, worked closely with Nelson on the project.

To exercise control over the fluids in and around a developing lung, the Princeton researchers fabricated artificial chest cavities. Made from silicone and glass, the microfluidic devices consisted of two chambers, sealed off from each other save for a connecting glass catheter, and had liquid piped in through a series of tiny rubber tubes.

Into the bottom chamber went an embryonic lung from a dissected mouse; the lung’s exterior was bathed in fluid inside the chamber. Researchers also filled the top chamber with fluid. The tracheal opening to the lung fit over the glass catheter, thus linking the interior of the lung and its nascent airways to the fluid in that top chamber. The setup allowed for differing pressures to be felt by the lung tissue, based on the amount of fluid pumped into the top and bottom chambers. The situation is much the same in a living mouse embryo. In the embryo, certain cells in the lung secrete fluid, creating an internal pressure within the organ against the pressure inside the rest of the embryo’s chest cavity.

During experiments, as the overall pressure across the organ increased, the contractions and growth of the smooth muscle wrapping the lung’s airways also increased. Previous research from the Nelson group has shown that this smooth muscle growth leads to new branching in the developing lung. Likewise, when pressure decreased, so, too, did the rate of contractions, causing the production of new branches to dip. “The relative difference in pressure between the inside and outside of the lung is the feature that controls its rate of development,” said Pang.

The researchers confirmed the observations by checking gene expression levels, which increased when muscle contractions were more frequent. Genes determine the rate of maturation in the lung, and pressure drives the activation of these genes, thus speeding proper development along, the data showed.

Surprisingly, the branching throughout the lung happened in a synchronized manner, even at distant locations. Long-lasting contractions of the smooth muscle tissues preceded the branching, suggesting that a uniform squeezing of the muscles interspersed in the lung, and guided by appropriate pressure levels, keeps the growth of a lung on track.

Nan Tang, an assistant investigator at the National Institute of Biological Sciences in Beijing who was not involved in the research, commented: “This study highlights the need to give appropriate consideration to the influence of mechanical forces in organ development.” Tang also noted the study could “yield information that leads to new preventative or therapeutic strategies for treating developmental lung disorders.”

Working out the complexity of making the lung in utero, researchers hope, will help not only with fetal pulmonary disorders, but also conditions that can manifest later in life, such as asthma.

“Clinical studies have suggested that many chronic diseases of the lung can be traced back to embryonic development,” said Nelson. “If we understood how something as simple as fluid pressure can speed up development, we might have more sophisticated approaches to treat developmental disorders, or to engineer functional, artificial tissues.”

“This work out of Celeste Nelson’s lab is really magnificent,” added Howard Stone, the Donald R. Dixon ’69 and Elizabeth W. Dixon Professor of Mechanical and Aerospace Engineering at Princeton, who consulted on the project as a paper co-author. “My guess is that it will one day end up in textbooks as an example of the way mechanical effects influence development.”