Along with eggs, soup and rubber toys, the list of the chicken's most lasting legacies may eventually include advanced materials such as self-organizing colloids, or optics that can transmit light with the efficiency of a crystal and the flexibility of a liquid.

The unusual arrangement of cells in a chicken's eye constitutes the first known biological occurrence of a potentially new state of matter known as "disordered hyperuniformity," according to researchers from Princeton University and Washington University in St. Louis. Research in the past decade has shown that disordered hyperuniform materials have unique properties when it comes to transmitting and controlling light waves, the researchers report in the journal Physical Review E.

States of disordered hyperuniformity behave like crystal and liquid states of matter, exhibiting order over large distances and disorder over small distances. Like crystals, these states greatly suppress variations in the density of particles — as in the individual granules of a substance — across large spatial distances so that the arrangement is highly uniform. At the same time, disordered hyperuniform systems are similar to liquids in that they have the same physical properties in all directions. Combined, these characteristics mean that hyperuniform optical circuits, light detectors and other materials could be controlled to be sensitive or impervious to certain light wavelengths, the researchers report. 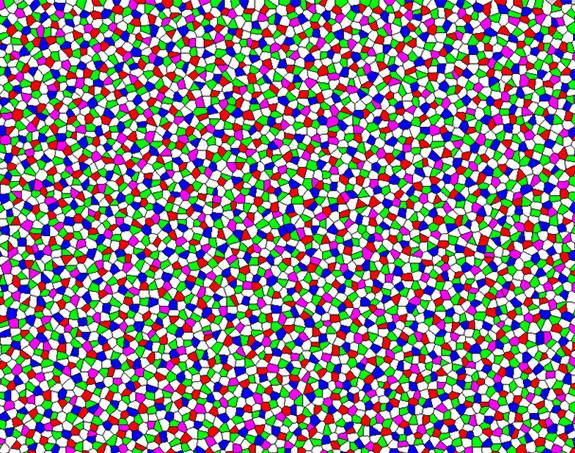 Researchers from Princeton University and Washington University in St. Louis report that the unusual arrangement of cells in a chicken's eye constitutes the first known biological occurrence of a potentially new state of matter known as "disordered hyperuniformity," which has been shown to have unique physical properties. These states have a "hidden order" that allows them to behave like crystal and liquid states of matter. They exhibit order over large distances and disorder over small distances. This diagram depicts the spatial distribution of the five types of light-sensitive cells known as cones in the chicken retina. (Courtesy of Joseph Corbo and Timothy Lau, Washington University in St. Louis)

"We've since discovered that such physical systems are endowed with exotic physical properties and therefore have novel capabilities," Torquato said. "The more we learn about these special disordered systems, the more we find that they really should be considered a new distinguishable state of matter."

The researchers studied the light-sensitive cells known as cones that are in the eyes of chickens and most other birds active in daytime. These birds have four types of cones for color — violet, blue, green and red — and one type for detecting light levels, and each cone type is a different size. The cones are packed into a single epithelial, or tissue, layer called the retina. Yet, they are not arranged in the usual way, the researchers report.

In many creatures' eyes, visual cells are evenly distributed in an obvious pattern such as the familiar hexagonal compact eyes of insects. In many creatures, the different types of cones are laid out so that they are not near cones of the same type. At first glance, however, the chicken eye appears to have a scattershot of cones distributed in no particular order.

Unlike chickens, visual cells are evenly distributed in an obvious pattern in many creatures' eyes. The Washington University researchers thought the unusual arrangement in chickens (left) had to do with how the cones are packed into their small, thin retina. The Princeton researchers developed a computer-simulation model that mimicked the final arrangement of chicken cones (right). The colored dots represent the centers of the chicken's eye cells. They are enlarged and colored for visualization purposes. (Courtesy of Salvatore Torquato, Princeton University)

The lab of co-corresponding author Joseph Corbo, an associate professor of pathology and immunology, and genetics at Washington University in St. Louis, studies how the chicken's unusual visual layout evolved. Thinking that perhaps it had something to do with how the cones are packed into such a small space, Corbo approached Torquato, whose group studies the geometry and dynamics of densely packed objects such as particles.

Torquato then worked with the paper's first author Yang Jiao, who received his Ph.D. in mechanical and aerospace engineering from Princeton in 2010 and is now an assistant professor of materials science and engineering at Arizona State University. Torquato and Jiao developed a computer-simulation model that went beyond standard packing algorithms to mimic the final arrangement of chicken cones and allowed them to see the underlying method to the madness.

It turned out that each type of cone has an area around it called an "exclusion region" that other cones cannot enter. Cones of the same type shut out each other more than they do unlike cones, and this variant exclusion causes distinctive cone patterns. Each type of cone's pattern overlays the pattern of another cone so that the formations are intertwined in an organized but disordered way — a kind of uniform disarray. So, while it appeared that the cones were irregularly placed, their distribution was actually uniform over large distances. That's disordered hyperuniformity, Torquato said.

"Because the cones are of different sizes it's not easy for the system to go into a crystal or ordered state," Torquato said. "The system is frustrated from finding what might be the optimal solution, which would be the typical ordered arrangement. While the pattern must be disordered, it must also be as uniform as possible. Thus, disordered hyperuniformity is an excellent solution."

The simulation revealed the underlying pattern of the chicken's cones. While the arrangement is a type of packing problem, it has the addition of an "exclusion region" around each type of cone that other cones cannot enter. Cones of the same type shut out each other more than they do unlike cones, and this variant exclusion causes distinctive cone patterns. Each type of cone's pattern overlays the pattern of another cone. So, while it appeared that the cones were irregularly placed, their distribution was actually uniform over large distances. In the diagram above, two cells (left) appear randomly placed. However, the exclusion regions for both the black (center) and red cells (right) push against nearby cells and give the cell arrangements structure. The black cells fall into a triangle-like pattern in the absence of other cell types. (Courtesy of Salvatore Torquato, Princeton University)

The researchers' findings add a new dimension called multi-hyperuniformity. This means that the elements that make up the arrangement are themselves hyperuniform. While individual cones of the same type appear to be unconnected, they are actually subtly linked by exclusion regions, which they use to self-organize into patterns. Multi-hyperuniformity is crucial for the avian system to evenly sample incoming light, Torquato said. He and his co-authors speculate that this behavior could provide a basis for developing materials that can self-assemble into a disordered hyperuniform state.

"You also can think of each one of these five different visual cones as hyperuniform," Torquato said. "If I gave you the avian system with these cones and removed the red, it's still hyperuniform. Now, let's remove the blue — what remains is still hyperuniform. That's never been seen in any system, physical or biological. If you had asked me to recreate this arrangement before I saw this data I might have initially said that it would be very difficult to do."

The discovery of hyperuniformity in a biological system could mean that the state is more common than previously thought, said Remi Dreyfus, a researcher at the Pennsylvania-based Complex Assemblies of Soft Matter lab (COMPASS) co-run by the University of Pennsylvania, the French National Centre for Scientific Research and the French chemical company Solvay. Previously, disordered hyperuniformity had only been observed in specialized physical systems such as liquid helium, simple plasmas and densely packed granules.

"It really looks like this idea of hyperuniformity, which started from a theoretical basis, is extremely general and that we can find them in many places," said Dreyfus, who is familiar with the research but had no role in it. "I think more and more people will look back at their data and figure out whether there is hyperuniformity or not. They will find this kind of hyperuniformity is more common in many physical and biological systems."

Evolutionarily speaking, the researchers' results show that nature found a unique workaround to the problem of cramming all those cones into the compact avian eye, Corbo said. The ordered pattern of cells in most other animals' eyes are thought to be the "optimal" arrangement, and anything less would result in impaired vision. Yet, birds with the arrangement studied here — including chickens — have impeccable vision, Corbo said.

"These findings are significant because they suggest that the arrangement of photoreceptors in the bird, although not perfectly regular, are, in fact, as regular as they can be given the packing constraints in the epithelium," Corbo said.

"This result indicates that evolution has driven the system to the 'optimal' arrangement possible, given these constraints," he said. "We still know nothing about the cellular and molecular mechanisms that underlie this beautiful and highly organized arrangement in birds. So, future research directions will include efforts to decipher how these patterns develop in the embryo."

The paper, "Avian photoreceptor patterns represent a disordered hyperuniform solution to a multiscale packing problem," was published Feb. 24 in Physical Review E. The work was supported by grants from the National Science Foundation (grant no. DMS-1211087), National Cancer Institute (grant no. U54CA143803); the National Institutes of Health (grant nos. EY018826, HG006346 and HG006790); the Human Frontier Science Program; the German Research Foundation (DFG); and the Simons Foundation (grant no. 231015).