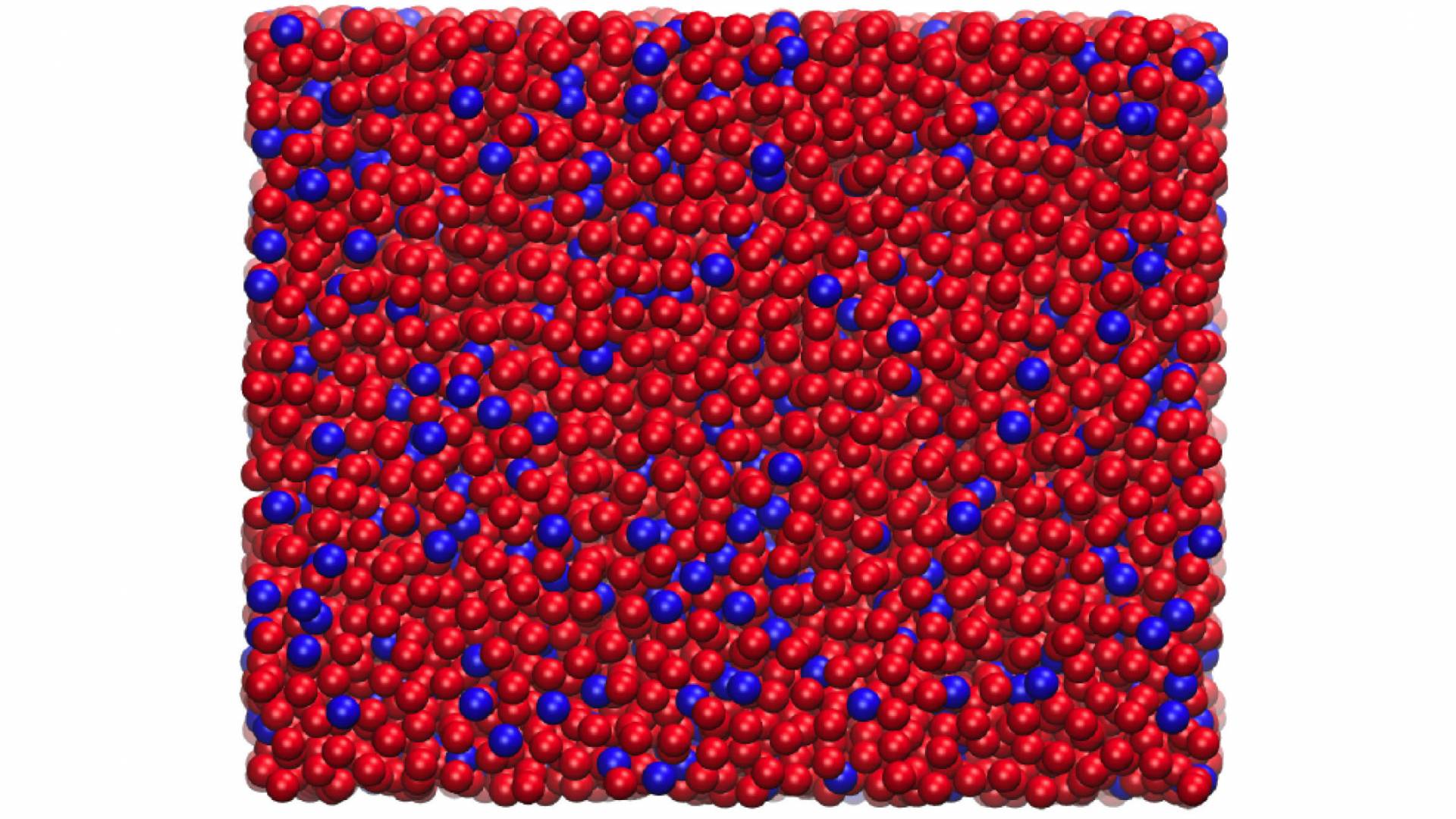 A new study challenges the notion that the atomic structure of glass is indistinguishable from that of a liquid­ ­— at least for a certain kind of glass called "amorphous ice" that forms when water is cooled to very low temperatures.

In the study, researchers at Princeton University and the City University of New York used computer simulations to show that the water molecules in amorphous ice are arranged in a previously undetected order, which the original liquid did not contain. The finding, published Sept. 29 in the journal Physics Review Letters, may help explain water’s curious, life-giving properties. It also challenges the very definition of what it means to be a glass.

Glasses are typically made by cooling a liquid rapidly, and, according to current understanding, a glass inherits the order that was present in the original liquid. In the case of amorphous ice, however, as the liquid water cools, a new and orderly arrangement of molecules emerges.

"According to our results, these types of glass are not simply frozen liquids — this picture doesn’t hold anymore," said Fausto Martelli, an associate research scholar in the Department of Chemistry at Princeton. "We are essentially saying that a notion that scientists have believed for many years is partially wrong."

Prior to this study, researchers knew that the rapid freezing of water, which can occur at the extremely cold temperatures found in outer space, leads to the formation of a very different material than the ice of everyday experience. This material, known as amorphous ice, lacks regular ice’s highly ordered crystalline structure, leading scientists to categorize it as a glass — a liquid whose movement has slowed to a glacial pace. Amorphous ices are not common on Earth, but they are the most abundant form of water in the universe.

A new study challenges the notion that the atomic structure of glass is indistinguishable from that of a liquid­ ­— at least for a certain kind of glass called "amorphous ice" that forms when water is cooled to very low temperatures.

In the study, researchers at Princeton University and the City University of New York used computer simulations to show that the water molecules in amorphous ice are arranged in a previously undetected order, which the original liquid did not contain.

The new study found that the molecules in these amorphous ices arrange into a previously undetected internal pattern. This pattern, known as disordered hyperuniformity, is defined as order across large spatial distances even when there is no order across short distances. Disordered hyperuniform materials fall somewhere between a crystal, which is highly organized over long distances, and a liquid, which is only ordered over short distances.

“The existence of these large-scale structural correlations has not been fully appreciated, and that is really what we wanted to address in this study,” said study co-author Salvatore Torquato, a professor of chemistry who, with Princeton senior scientist Frank Stillinger, first identified hyperuniformity more than a decade ago (Physical Review E, 2003). “The information present in these systems is quite striking, and leads to completely new insights about materials,” he said. He and his colleagues have since identified hyperuniformity in a number of places, including the arrangement of cells in a chicken’s eye (Physical Review E, 2014).

In addition to Martelli and Torquato, the study authors included Roberto Car, Princeton’s Ralph W. *31 Dornte Professor in Chemistry, and Nicolas Giovambattista, an associate professor at Brooklyn College-The City University of New York. Torquato and Car are associated with the Princeton Institute for the Science and Technology of Materials.

To explore the internal structure of amorphous ices, Martelli used a computer model that tracks the behavior of over 8,000 water molecules to simulate what would happen if he cooled the water down to about 80 degrees Kelvin (about -316 degrees Fahrenheit). At this temperature, water molecules are so deprived of heat that they can no longer move from place to place, nor rotate in place. At this temperature and below, the researchers observed the hyperuniform pattern emerge in the data from the computer simulation.

“We are not used to looking for order on such large length-scales,” Martelli said. “However, mathematics allows us to shed light on patterns that our eyes are not able to see.”

The simulations required months of time on high-performance research computers, including Princeton University’s TIGRESS clusters through the Princeton Institute for Computational Science and Engineering.

The simulation enabled the researchers to ask questions about the nature of water, which has many anomalous behaviors that make it uniquely suited to supporting life. One such anomaly is that the crystalline form of ice is less dense than liquid water, allowing ice to float, which in turn allows life to exist under the ice in lakes and oceans.

One possible explanation for water’s anomalies is that, at very cold temperatures, water may come in two liquid phases — one denser than the other ­­— rather than just the one liquid state we find familiar. Detecting the transition of water between the high-density and low-density forms has proven elusive due to technical challenges.

The current study provides indirect support for the existence of the two forms, at least in computer simulations. Giovambattista simulated the application of high pressure to the model and observed that the pressure converted the low-density form of amorphous ice into a high-density form. The transition between the two forms of amorphous ice is consistent with the existence of two liquid forms of water.

Amorphous ices can be produced in laboratory settings, Martelli said, and it may be possible to find evidence of hyperuniformity in these experiments.

The study was funded by the U.S. Department of Energy grant DE-SC0008626 and the National Science Foundation grant DMR-1714722.