Time crystals may sound like something from science fiction, having more to do with time travel or Doctor Who. These strange materials — in which atoms and molecules are arranged across space and time — are in fact quite real, and are opening up entirely new ways to think about the nature of matter. They also eventually may help protect information in futuristic devices known as quantum computers.

Two groups of researchers based at Harvard University and the University of Maryland are reporting in the journal Nature March 9 that they have successfully created time crystals using theories developed at Princeton University. The Harvard-based team included scientists from Princeton who played fundamental roles in working out the theoretical understanding that led to the creation of these exotic crystals.

"Our work discovered the essential physics of how time crystals function," said Shivaji Sondhi, a Princeton professor of physics. "What is more, this discovery builds on a set of developments at Princeton that gets at the issue of how we understand complex systems in and out of equilibrium, which is centrally important to how physicists explain the nature of the everyday world." 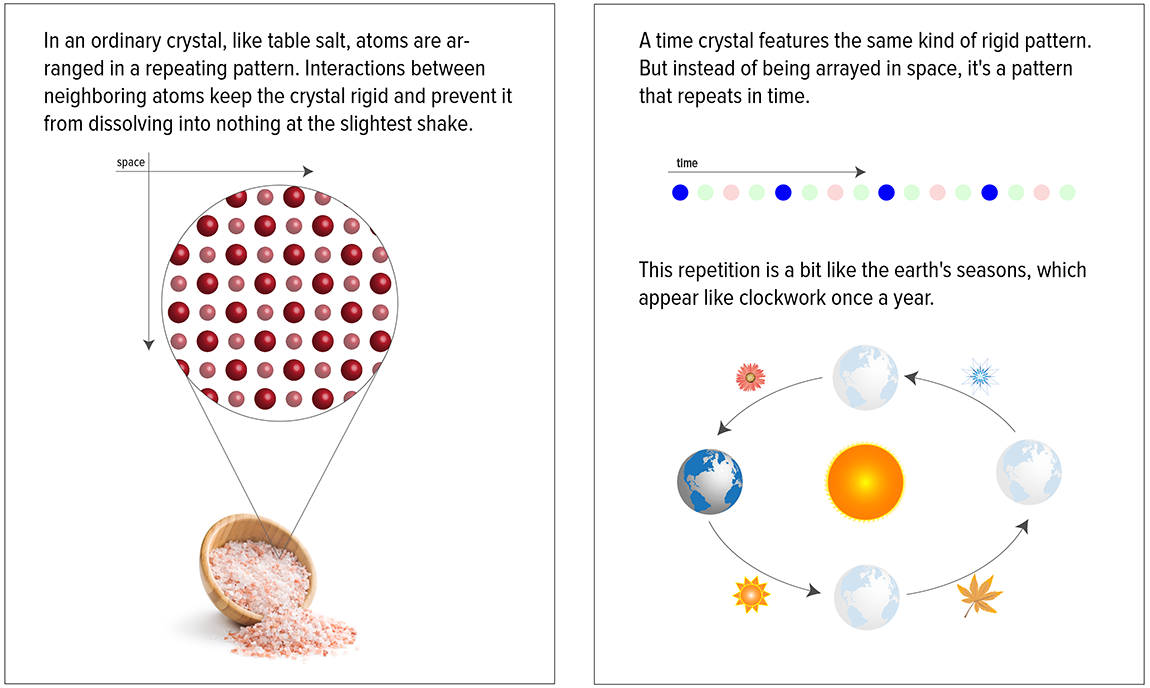 Princeton University researchers provided the theoretical understanding that led to the creation of time crystals being reported in the journal Nature March 9 by two groups of researchers based at Harvard University and the University of Maryland. Time crystals feature atoms and molecules arranged across space and time and are opening up entirely new ways to think about the nature of matter. The illustration above explains the difference between ordinary crystals (left) such as diamonds, quartz or ice and time crystals (right). (Image by Emily Edwards, University of Maryland)

In 2015, Sondhi and colleagues including then-graduate student Vedika Khemani, who earned her Ph.D. at Princeton in 2016 and is now a junior fellow at Harvard, as well as collaborators Achilleas Lazarides and Roderich Moessner at the Max Planck Institute for the Physics of Complex Systems in Germany, published the theoretical basis for how time crystals — at first considered impossible — could actually exist. Published in the journal Physics Review Letters in June 2016, the paper spurred conversations about how to build such crystals.

Ordinary crystals such as diamonds, quartz or ice are made up of molecules that spontaneously arrange into orderly three-dimensional patterns. The sodium and chlorine atoms in a crystal of salt, for example, are spaced at regular intervals.

In time crystals, however, atoms are arranged in patterns not only in space, but also in time. In addition to containing a pattern that repeats in space, time crystals contain a pattern that repeats over time. One way this could happen is that the atoms in the crystal move at a certain rate. Were a time crystal of ice to exist, all of the water molecules would vibrate at an identical frequency. What is more, the molecules would do this without any input from the outside world.

The concept of time crystals originated with physicist Frank Wilczek at the Massachusetts Institute of Technology, a former Princeton faculty member who received his Ph.D. in physics from Princeton in 1975. In 2012, the Nobel laureate was thinking about the similarities between space and time. In physics parlance, crystals are said to "break translational symmetry in space" because the atoms assemble into rigid patterns rather than being evenly spread out, as they are in a liquid or gas. Shouldn't there also be crystals that break translational symmetry in time?

"The atoms move in time, but instead of moving in a fluid or continuous way, they move in a periodic way," Sondhi said. "It was an interesting idea." It also was an idea that led to hot debates in the physics journals about whether such crystals could exist. The initial conclusion appeared to be that they could not, at least not in the settings Wilczek visualized.

Sondhi and Khemani were thinking about a completely different problem in 2015 when they worked out the theory of how time crystals could exist. They were exploring questions about how atoms and molecules settle down, or come to equilibrium, to form phases of matter such as solids, liquids and gases.

While it was common wisdom among physicists that all systems eventually settle down, work during the last decade or so had challenged that notion, specifically among atoms at very low temperatures where the rules of quantum physics apply. It was realized that there are systems that never go to equilibrium because of a phenomenon called "many-body localization," which occurs due to the behavior of many atoms in a disordered quantum system that are influencing each other.

Work in this area is a long Princeton tradition. The first and seminal concept of how quantum systems can be localized when they are disordered, called Anderson localization, stemmed from work by Philip Anderson, a Princeton professor and Nobel laureate, in 1958. This work was extended in 2006 to systems of many atoms by then Princeton professor Boris Altshuler, postdoctoral fellow Denis Basko, and Igor Aleiner of Columbia University.

While on sabbatical at the Max Planck Institute for the Physics of Complex Systems in Germany, Sondhi and Khemani realized that these ideas about how to prevent systems from reaching equilibrium would enable the creation of time crystals. A system in equilibrium cannot be a time crystal, but non-equilibrium systems can be created by periodically poking, or "driving," a crystal by shining a laser on its atoms. To the researchers' surprise, their calculations revealed that periodically prodding atoms that were in non-equilibrium many-body localized phases would cause the atoms to move at a rate that was twice as slow — or twice the period — as the initial rate at which they were prodded.

To explain, Sondhi compared the driving of the quantum system to squeezing periodically on a sponge. "When you release the sponge, you expect it to resume its shape. Imagine now that it only resumes its shape after every second squeeze even though you are applying the same force each time. That is what our system does," he said.

Princeton postdoctoral researcher Curt von Keyserlingk, who contributed additional theoretical work with Khemani and Sondhi, said, "We explained how the time crystal systems lock into the persistent oscillations that signify a spontaneous breaking of time translation symmetry." Additional work by researchers at Microsoft's Station Q and the University of California-Berkeley led to further understanding of time crystals.

As a result of these theoretical studies, two groups of experimenters began attempting to build time crystals in the laboratory. The Harvard-based team, which included Khemani at Harvard and von Keyserlingk at Princeton, used an experimental setup that involved creating an artificial lattice in a synthetic diamond. A different approach at the University of Maryland used a chain of charged particles called ytterbium ions. Both teams have now published the work this week in Nature.

Both systems show the emergence of time crystalline behavior, said Christopher Monroe, a physicist who led the effort at the University of Maryland. "Although any applications for this work are far in the future, these experiments help us learn something about the inner workings of this very complex quantum state," he said.

The research may eventually lead to ideas about how to protect information in quantum computers, which can be disrupted by interference by the outside world. Many-body localization can protect quantum information, according to research published in 2013 by the Princeton team of David Huse, the Cyrus Fogg Brackett Professor of Physics, as well as Sondhi and colleagues Rahul Nandkishore, Vadim Oganesyan and Arijeet Pal. The research also sheds light on ways to protect topological phases of matter, research for which Princeton's F. Duncan Haldane, the Eugene Higgins Professor of Physics, shared the 2016 Nobel Prize in Physics.

Sondhi said that the work addresses some of the most fundamental questions about the nature of matter. "It was thought that if a system doesn't settle down and come to equilibrium, you couldn't really say that it is in a phase. It is a big deal when you can give a definition of a phase of matter when the matter is not in equilibrium," he said.

This out-of-equilibrium setting has enabled the realization of new and exciting phases of matter, according to Khemani. "The creation of time crystals has allowed us to add an entry into the catalog of possible orders in space-time, previously thought impossible," Khemani said.