For the first time, an experiment has directly imaged electron orbits in a high-magnetic field, illuminating an unusual collective behavior in electrons and suggesting new ways of manipulating the charged particles.

The study, conducted by researchers at Princeton University and the University of Texas-Austin, was published Oct. 21 in the journal Science. The study demonstrates that the electrons, when kept at very low temperatures where their quantum behaviors emerge, can spontaneously begin to travel in identical elliptical paths on the surface of a crystal of bismuth, forming a quantum fluid state. This behavior was anticipated theoretically during the past two decades by researchers from Princeton and other universities. 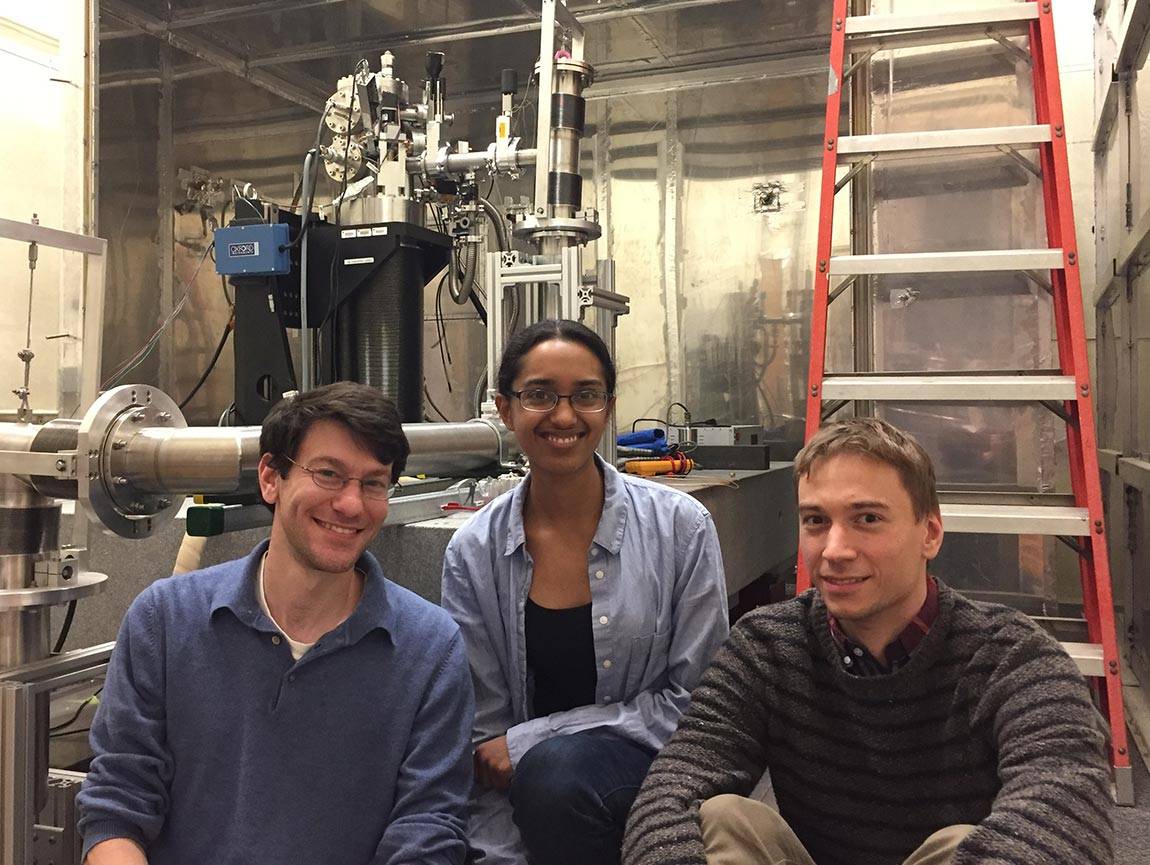 Princeton researchers have observed an unusual collective behavior in electrons that suggests new ways of manipulating the charged particles, and may provide the basis for faster and more efficient electronic technologies. The study relied on experiments using a scanning tunneling microscope (background) operated by (from left) Benjamin Feldman, an associate research scholar in Princeton's Department of Physics; Mallika Randeria, a graduate student in physics; and András Gyenis, a postdoctoral research associate in the Department of Electrical Engineering. (Images courtesy of Ali Yazdani, Department of Physics)

"This is the first visualization of a quantum fluid of electrons in which interactions between the electrons make them collectively choose orbits with these unusual shapes," said Ali Yazdani, the Class of 1909 Professor of Physics at Princeton, who led the research.

"The other big finding is that this is the first time the orbits of electrons moving in a magnetic field have been directly visualized," Yazdani said. "In fact, it is our ability to image these orbits that allowed us to detect the formation of this strange quantum liquid."

Fundamental explorations of materials may provide the basis for faster and more efficient electronic technologies. Today's electronic devices, from computers to cellphones, use processors made from silicon. With silicon reaching its maximum capacity for information processing, researchers are looking to other materials and mechanisms.

One area of progress has been in two-dimensional materials, which allow control of electron motion by breaking the particles away from the constraints of the underlying crystal lattice. This involves moving electrons among "pockets" or "valleys" of possible states created by the crystal. Some researchers are working on ways to apply this process in an emerging field of research known as "valleytronics." 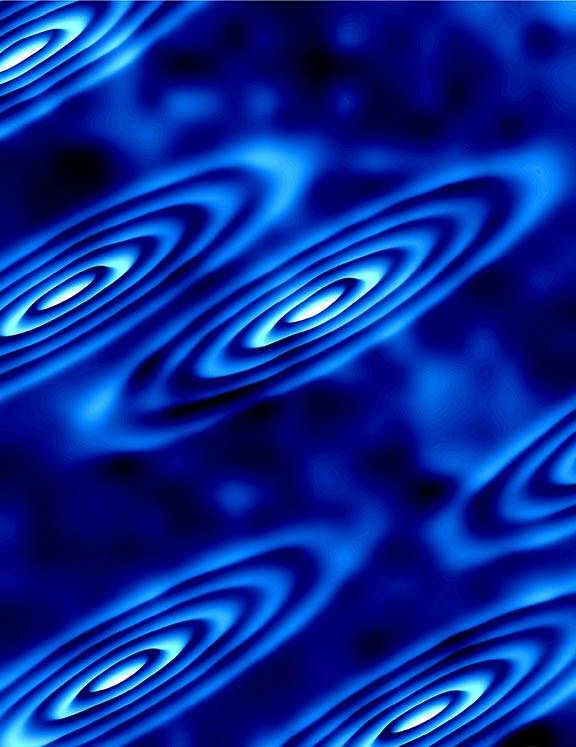 Strange electron orbits form on the surface of a crystal in this image created using a theoretical data model. These orbits correspond to the electrons being in different "valleys" of states, yielding new insights into an area of research called "vallytronics," which seeks replacements for silicon in future electronics.

In the current work, the strange elliptical orbits correspond to the electrons being in different "valleys" of states. This experiment demonstrates one of the rare situations where electrons spontaneously occupy one valley or another, the researchers said.

Bismuth has relatively few electrons, which makes it ideal for watching what happens to a flow of electrons subjected to a high magnetic field. Despite its purity, the crystal Ji and Cava grew contained some defects. Roughly one atom was slightly out of place for every tens of thousands of atoms.

Normally, in the absence of the magnetic field, electrons in a crystal will flit from atom to atom. Applying a strong magnetic field perpendicular to the flow of electrons forces the electrons' paths to curve into orbit around a nearby defect in the crystal, like planets going around the sun. The researchers found that they could measure the properties, or wave functions, of these orbits, giving them an important tool for studying the two-dimensional soup of electrons on the surface of the crystal. 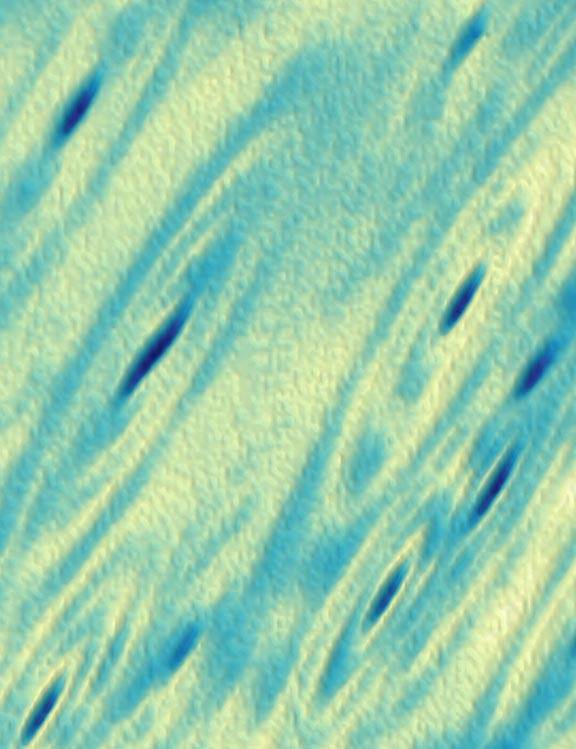 Using a microscope capable of detecting electrons, researchers at Princeton imaged strange elliptical orbits of electrons on the surface of a crystal of bismuth (pictured). Bismuth has relatively few electrons, which makes it ideal for watching what happens to a flow of electrons subjected to a high magnetic field.

Due to the crystal's lattice structure, the researchers expected to see three differently shaped elliptical orbits. Instead the researchers found that all the electron orbits spontaneously lined up in the same direction, or "nematic" order. The researchers determined that this behavior occurred because the strong magnetic field caused electrons to interact with each other in ways that disrupted the symmetry of the underlying lattice.

"It is as if spontaneously the electrons decided, 'It would lower our energy if we all picked one particular direction in the crystal and deformed our motion in that direction,'" Yazdani said.

"What was anticipated but never demonstrated is that we can turn the electron fluid into this nematic fluid, with a preferred orientation, by changing the interaction between electrons," he said. "By adjusting the strength of the magnetic field, you can force the electrons to interact strongly and actually see them break the symmetry of the surface of the crystal by choosing a particular orientation collectively."

Spontaneous broken symmetries are an active area of study thought to underlie physical properties such as high-temperature superconductivity, which enables electrons to flow without resistance.

Prior to directly imaging the behavior of these electrons in magnetic fields, researchers had hints of this behavior, which they call a nematic quantum Hall liquid, from other types of experiments, but the study is the first direct measurement.

"People have been looking at these states in a bunch of different contexts and this experiment represents a new way of observing them," said Allan MacDonald, a professor of physics at the University of Texas-Austin who contributed theoretical understanding to the study along with graduate student Fengcheng Wu, who is now at Argonne National Laboratory. "I'd done some work on a similar system together with former graduate students, Xiao Li, who is now at the University of Maryland, and Fan Zhang, now at the University of Texas-Dallas. When Yazdani's group showed me what they saw, I immediately recognized that they had identified a state that we had predicted, but in a completely unexpected way. It was quite a happy surprise."

The study gives experimental evidence for ideas predicted over the past two decades, including theoretical work by Princeton Professor of Physics Shivaji Sondhi and others.

Eduardo Fradkin, a professor of physics at the University of Illinois at Urbana-Champaign, contributed, along with Steven Kivelson, a professor of physics at Stanford University, to early predictions of this behavior in a paper published in Nature in 1998. "What Yazdani's experiments give us is a more quantitative test to explore the collective property of the electrons in this material," said Fradkin, who was not involved in the current study. "This is something we made arguments for, and only now has it been confirmed in this particular material. For me, this is very satisfying to see."

Funding for the study was provided by the Gordon and Betty Moore Foundation, the U.S. Department of Energy, the National Science Foundation through the Princeton Center for Complex Materials, the U.S. Army Research Office, and the Eric and Wendy Schmidt Transformative Technology Fund at Princeton.

The study, "Observation of a nematic quantum Hall liquid on the surface of bismuth," was published Oct. 21 in the journal Science.