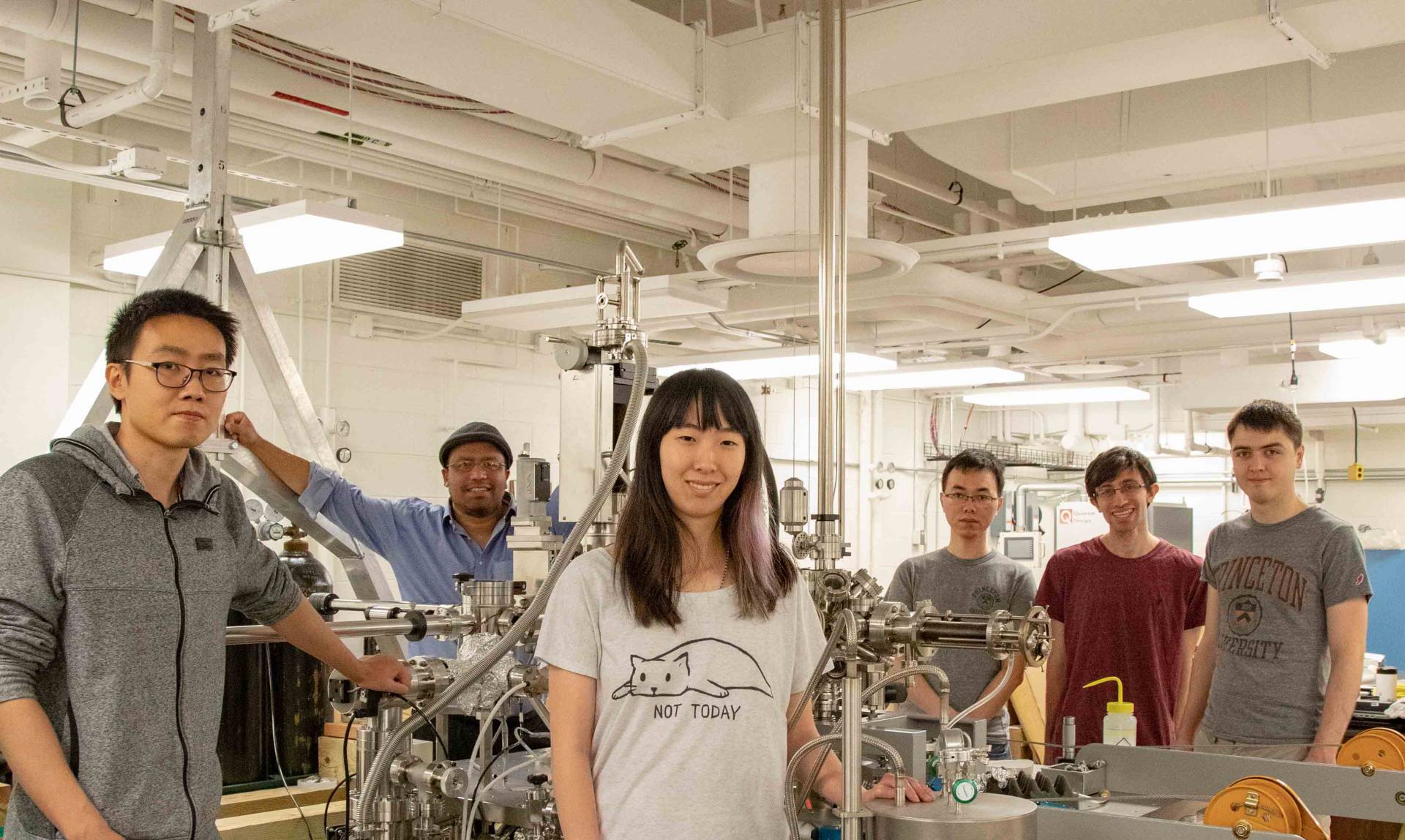 An international team of researchers led by Princeton physicist Zahid Hasan has discovered a novel quantum state of matter that can be manipulated at will with a weak magnetic field, which opens new possibilities for next-generation nano- or quantum technologies. Researchers in Hasan’s lab include (from left): Jia-Xin Yin, Zahid Hasan, Songtian Sonia Zhang, Daniel Multer, Maksim Litskevich and Guoqing Chang.

Quantum particles can be difficult to characterize, and almost impossible to control if they strongly interact with each other — until now.

An international team of researchers led by Princeton physicist Zahid Hasan has discovered a quantum state of matter that can be “tuned” at will — and it’s 10 times more tuneable than existing theories can explain. This level of manipulability opens enormous possibilities for next-generation nanotechnologies and quantum computing.

“We found a new control knob for the quantum topological world,” said Hasan, the Eugene Higgins Professor of Physics. “We expect this is tip of the iceberg. There will be a new subfield of materials or physics grown out of this. … This would be a fantastic playground for nanoscale engineering.”

Hasan and his colleagues, whose research appears in the current issue of Nature, are calling their discovery a “novel” quantum state of matter because it is not explained by existing theories of material properties. 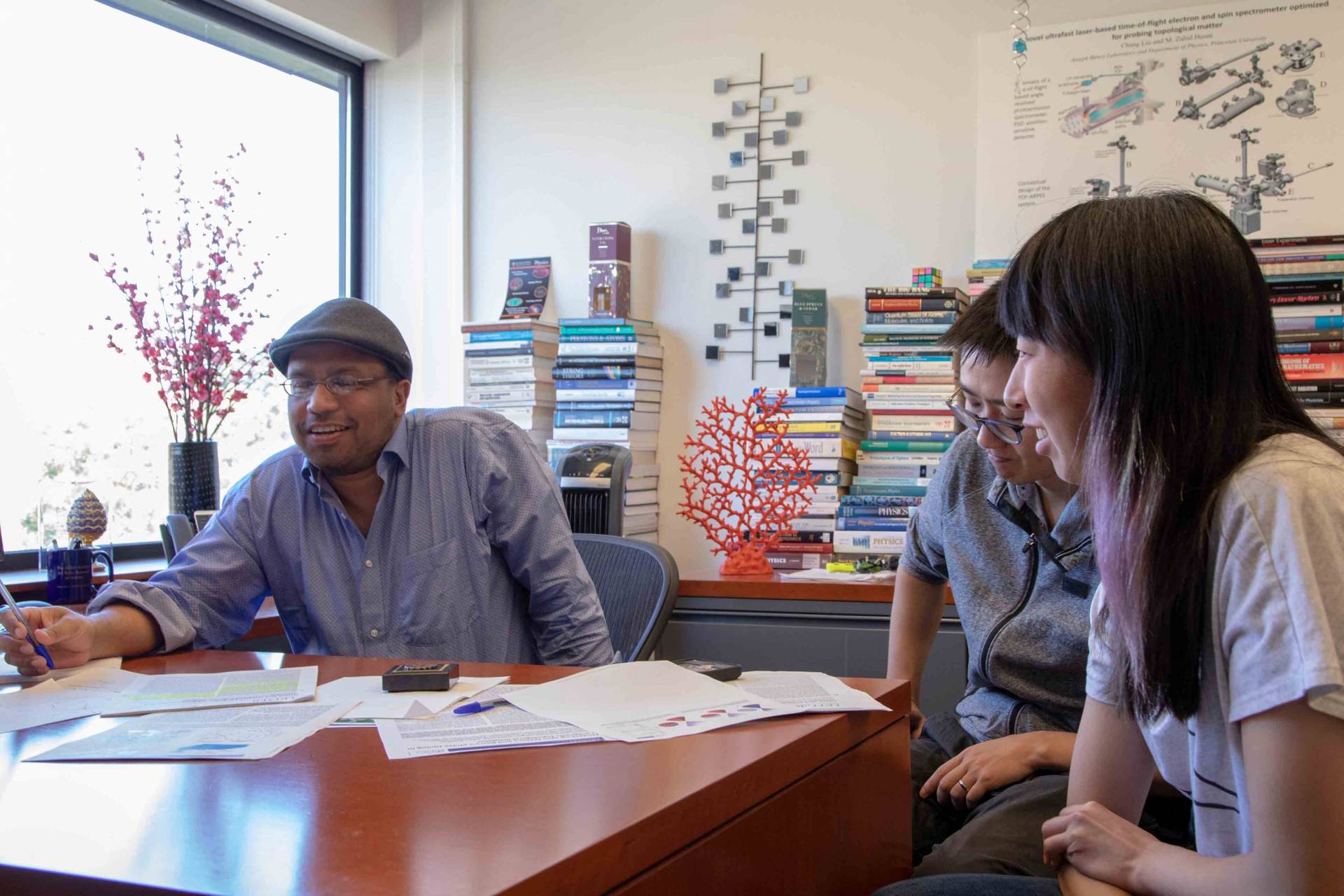 Hasan discusses the discovery with Yin and Zhang in his office in Jadwin Hall.

Hasan’s interest in operating beyond the edges of known physics is what attracted Jia-Xin Yin, a postdoctoral research associate and one of three co-first-authors on the paper, to his lab. Other researchers had encouraged him to tackle one of the defined questions in modern physics, Yin said.

“But when I talked to Professor Hasan, he told me something very interesting,” Yin said. “He’s searching for new phases of matter. The question is undefined. What we need to do is search for the question rather than the answer.”

The classical phases of matter — solids, liquids and gases — arise from interactions between atoms or molecules. In a quantum phase of matter, the interactions take place between electrons, and are much more complex.

“This could indeed be evidence of a new quantum phase of matter — and that’s, for me, exciting,” said David Hsieh, a professor of physics at the California Institute of Technology and a 2009 Ph.D. graduate of Princeton, who was not involved in this research. “They’ve given a few clues that something interesting may be going on, but a lot of follow-up work needs to be done, not to mention some theoretical backing to see what really is causing what they’re seeing.”

Hasan has been working in the groundbreaking subfield of topological materials, an area of condensed matter physics, where his team discovered topological quantum magnets a few years ago. In the current research, he and his colleagues “found a strange quantum effect on the new type of topological magnet that we can control at the quantum level,” Hasan said.

The key was looking not at individual particles but at the ways they interact with each other in the presence of a magnetic field. Some quantum particles, like humans, act differently alone than in a community, Hasan said. “You can study all the details of the fundamentals of the particles, but there’s no way to predict the culture, or the art, or the society, that will emerge when you put them together and they start to interact strongly with each other,” he said.

To study this quantum “culture,” he and his colleagues arranged atoms on the surface of crystals in many different patterns and watched what happened. They used various materials prepared by collaborating groups in China, Taiwan and Princeton. One particular arrangement, a six-fold honeycomb shape called a “kagome lattice” for its resemblance to a Japanese basket-weaving pattern, led to something startling — but only when examined under a spectromicroscope in the presence of a strong magnetic field, equipment found in Hasan’s Laboratory for Topological Quantum Matter and Advanced Spectroscopy, located in the basement of Princeton’s Jadwin Hall.

When the researchers turn an external magnetic field in different directions (indicated with arrows), they change the orientation of the linear electron flow above the kagome (six-fold) magnet, as seen in these electron wave interference patterns on the surface of a topological quantum kagome magnet. Each pattern is created by a particular direction of the external magnetic field applied on the sample.

All the known theories of physics predicted that the electrons would adhere to the six-fold underlying pattern, but instead, the electrons hovering above their atoms decided to march to their own drummer — in a straight line, with two-fold symmetry.

“The electrons decided to reorient themselves,” Hasan said. “They ignored the lattice symmetry. They decided that to hop this way and that way, in one line, is easier than sideways. So this is the new frontier. … Electrons can ignore the lattice and form their own society.”

This is a very rare effect, noted Caltech’s Hsieh. “I can count on one hand” the number of quantum materials showing this behavior, he said.

The researchers were shocked to discover this two-fold arrangement, said Songtian Sonia Zhang, a graduate student in Hasan’s lab and another co-first-author on the paper. “We had expected to find something six-fold, as in other topological materials, but we found something completely unexpected,” she said. “We kept investigating — Why is this happening? — and we found more unexpected things. It’s interesting because the theorists didn’t predict it at all. We just found something new.”

The decoupling between the electrons and the arrangement of atoms was surprising enough, but then the researchers applied a magnetic field and discovered that they could turn that one line in any direction they chose. Without moving the crystal lattice, Zhang could rotate the line of electrons just by controlling the magnetic field around them.

“Sonia noticed that when you apply the magnetic field, you can reorient their culture,” Hasan said. “With human beings, you cannot change their culture so easily, but here it looks like she can control how to reorient the electrons’ many-body culture.”

The researchers can’t yet explain why.

“It is rare that a magnetic field has such a dramatic effect on electronic properties of a material,” said Subir Sachdev, the Herchel Smith Professor of Physics at Harvard University and chair of the physics department, who was not involved in this study.

Even more surprising than this decoupling — called anisotropy — is the scale of the effect, which is 100 times more than what theory predicts. Physicists characterize quantum-level magnetism with a term called the “g factor,” which has no units. The g factor of an electron in a vacuum has been precisely calculated as very slightly more than two, but in this novel material, the researchers found an effective g factor of 210, when the electrons strongly interact with each other.

“Nobody predicted that in topological materials,” said Hasan.

“There are many things we can calculate based on the existing theory of quantum materials, but this paper is exciting because it’s showing an effect that was not known,” he said. This has implications for nanotechnology research especially in developing sensors. At the scale of quantum technology, efforts to combine topology, magnetism and superconductivity have been stymied by the low effective g factors of the tiny materials.

“The fact that we found a material with such a large effective g factor, meaning that a modest magnetic field can bring a significant effect in the system — this is highly desirable,” said Hasan. “This gigantic and tunable quantum effect opens up the possibilities for new types of quantum technologies and nanotechnologies.”

The discovery was made using a two-story, multi-component instrument known as a scanning tunneling spectromicroscope, operating in conjunction with a rotatable vector magnetic field capability, in the sub-basement of Jadwin Hall. The spectromicroscope has a resolution less than half the size of an atom, allowing it to scan individual atoms and detect details of their electrons while measuring the electrons’ energy and spin distribution. The instrument is cooled to near absolute zero and decoupled from the floor and the ceiling to prevent even atom-sized vibrations. 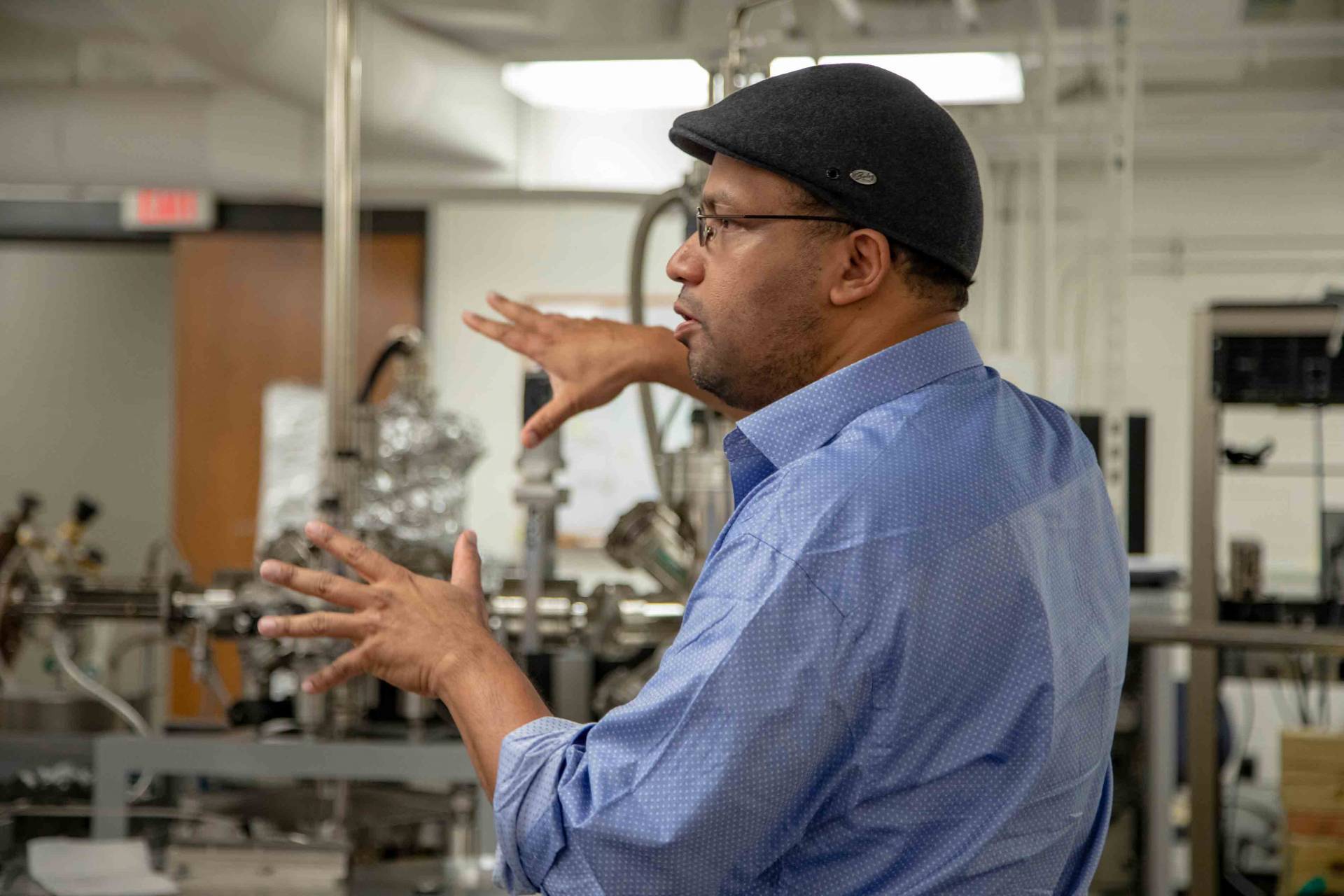 Hasan describes the role of the scanning tunneling spectromicroscope, which has a resolution less than half the size of an atom. The instrument is located in the Laboratory for Topological Quantum Matter and Advanced Spectroscopy in Princeton’s Jadwin Hall, where it is cooled to 0.4 Kelvin and decoupled from the floor and ceiling to prevent even atom-sized vibrations.

“We’re going down to 0.4 Kelvin. It’s colder than intergalactic space, which is 2.7 Kelvin,” said Hasan. “And not only that, the tube where the sample is — inside that tube we create a vacuum condition that’s more than a trillion times thinner than Earth’s upper atmosphere. It took about five years to achieve these finely tuned operating conditions of the multi-component instrument necessary for the current experiment,” he said.

“All of us, when we do physics, we’re looking to find how exactly things are working,” said Zhang. “This discovery gives us more insight into that because it’s so unexpected.”

The paper, “Giant and anisotropic spin-orbit tunability in a strongly correlated kagome magnet” was published in the Sept. 12 issue of Nature (DOI: 10.1038/s41586-018-0502-7). The work at Princeton was primarily supported by the Gordon and Betty Moore Foundation’s Emergent Phenomena in Quantum Systems Initiative (grant no. GBMF4547) and the U.S. Department of Energy’s Basic Energy Sciences Division (grant no. DE-FG-02-05ER462000).