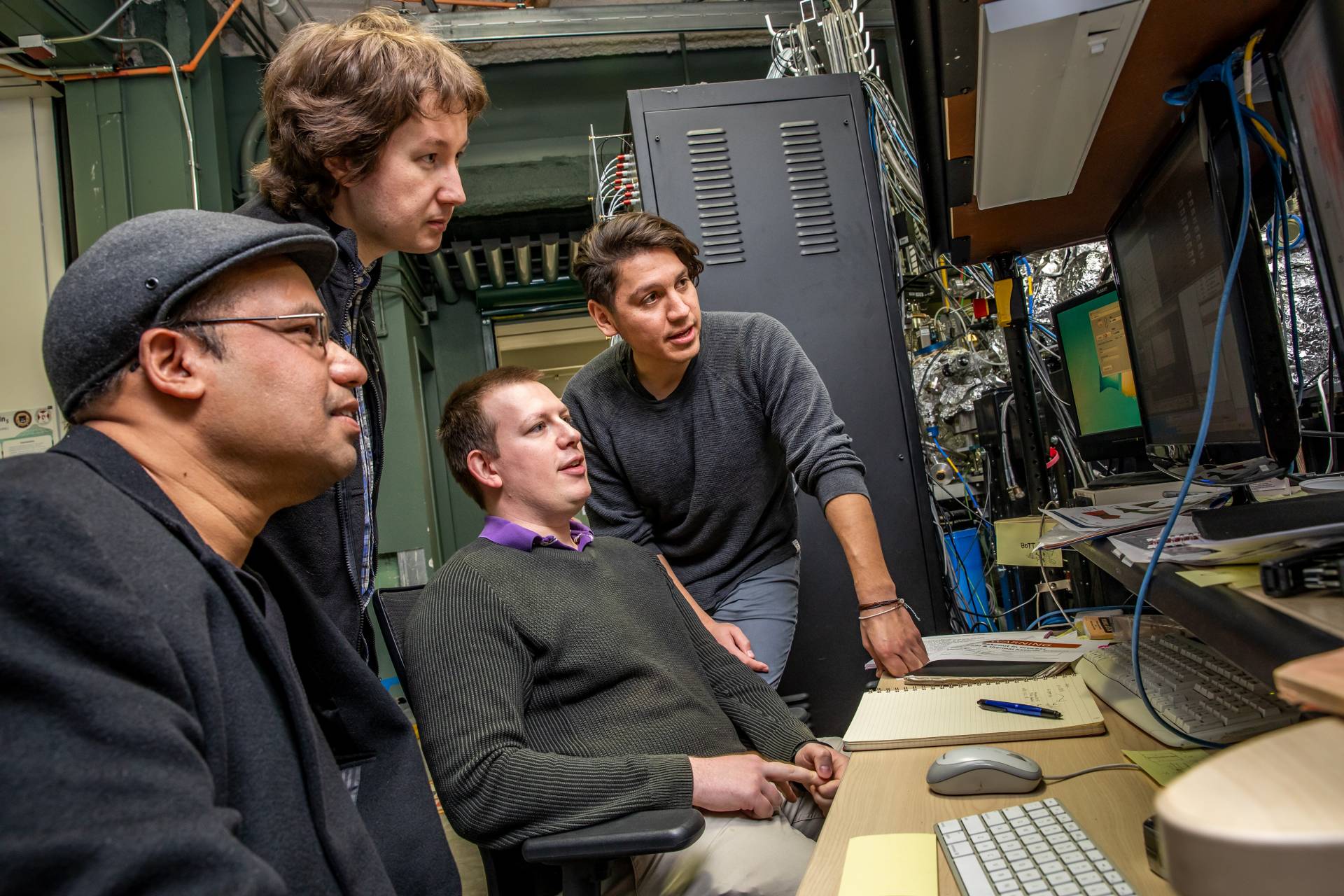 Physics Professor Zahid Hasan (left) looks at data with graduate students Ilya Belopolski, Tyler Cochran and Daniel Sanchez. The three students are co-first authors on a new paper in Nature that introduces chiral crystals — crystals with a spiral-shaped asymmetry — with topological properties that may contribute to next-generation quantum, magnetic and optical technologies.

An international team of researchers has discovered that certain classes of crystals with an asymmetry like biological “handedness,” known as chiral crystals, may harbor electrons that behave in unexpected ways.

“Before our work, quantum-level properties of electrons in chiral crystals were rarely studied,” said M. Zahid Hasan, the Eugene Higgins Professor of Physics at Princeton University, who led the research. “This decisive work opens up a new continent for explorations in topological materials.”

Chirality, also known as handedness, is a physical property common to all objects that cannot be superimposed on their mirror image. It manifests in everyday objects such as gloves, shoes, screws and multi-level parking garages. Chiral crystals are of great interest to physicists due to their magnetic, optical, conducting and especially their topological properties. In 2016, Duncan Haldane, Princeton’s Sherman Fairchild University Professor of Physics, won the Nobel Prize in Physics for his theories predicting the properties of topological materials.

“The topological properties of matter have emerged as one of the most sought-after treasures in modern physics,” said Hasan, “both from a fundamental point of view and for finding potential applications in next-generation quantum and nanotechnologies.” 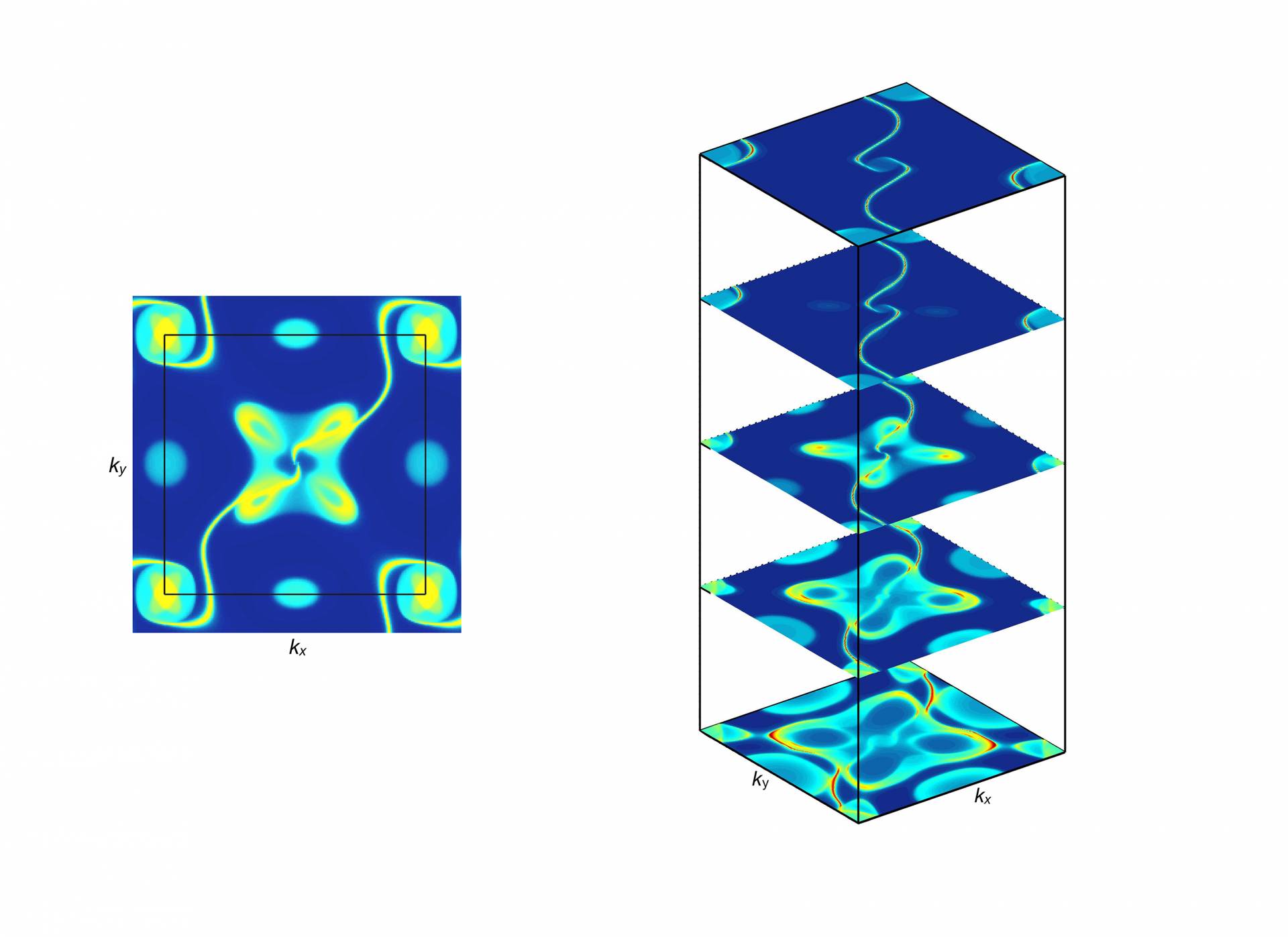 In an October 2018 article, Hasan’s team proposed a theory that bridged the gap between the physical chirality of crystals and how electrons behave in those crystals, both quantum mechanically and according to the mathematical laws of topology. The researchers were surprised to discover that all non-magnetic chiral crystals share a universal topological quantum property: all of their electronic structures feature band-touching points governed by the Weyl equation, a quantum equation of motion. Physicist Hermann Weyl predicted such behavior of particles while at Princeton in 1929.

Using their predictive theory, the authors also identified numerous high-quality chiral compounds with the potential for experimental applications. Among them, the rhodium silicides, known collectively as the RhSi family, showed the greatest promise, exhibiting the longest possible topological surface Fermi arcs — a huge energy window for exploring electronic behaviors. Utilizing their revolutionary technique to detect Weyl fermions — which Physics World identified as one of the Top 10 Breakthroughs of 2015 — Hasan and his team started a study of electrons in chiral crystals RhSi family a few years ago.

They studied the atoms’ arrangement on the surface of the material using several techniques, such as checking for the right kind of symmetry using the scanning tunneling microscope in Hasan’s Laboratory for Topological Quantum Matter and Advanced Spectroscopy located in the basement of Princeton’s Jadwin Hall. 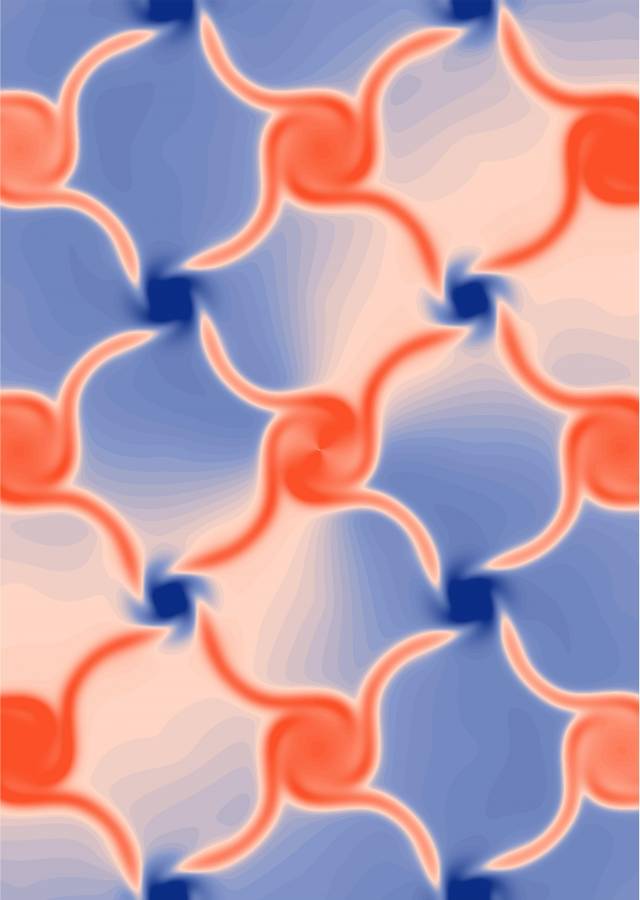 This image shows a repeated 2-D pattern of a surface Fermi arc in rhodium-silicon crystal samples.

The chiral crystals were then taken to Lawrence Berkeley National Laboratory, where members of the research team used high energy X-rays to knock electrons off the surface, as analyzing the patterns made by the emitted electrons can reveal their masses and velocities. The researchers found that electrons emitted from deeper within the samples had effectively zero mass, and their velocity and spin distributions revealed both their chiral (handed) behavior and their collective monopole-like character.

“It is amazing to see that somehow the chirality of the crystal structure has a profound effect on the electrons in these materials — they are now massless and chiral,” said Tyler Cochran, a physics graduate student and one of the three co-first authors of the paper.

“We expect this is the tip of the iceberg,” said fellow graduate student and co-first author Ilya Belopolski. “There are so many chiral crystals in nature. It would be great to check how many of those are topological. This would be a fantastic playground for new types of quantum phenomena.”

“Chiral crystals seem to be a perfect source for novel electronic phases of matter and more excitingly, for the massless electrons of the kind physicists were searching for many years,” said Daniel Sanchez, another co-first author. “This is just terrific that we found them.”

The researchers were excited to discover this quantum-level chiral behavior of electrons, said Guoqing Chang, a postdoctoral research associate in Hasan’s lab who was the first author of the theory paper predicting these topological phenomena. “It is one of those examples where our theoretical predictions have been realized experimentally,” he said. “That does not always happen. We predicted something new that agreed with what Mother Nature had in store for us — this is just exciting.”

“It is indeed immensely satisfying when you predict something exotic and it also appears in the laboratory experiments,” Hasan said. “This is not the first time we have succeeded in predicting topological effects in quantum physics. We successfully predicted some of the new bismuth-based topological insulators that are now among the mostly studied compounds in the field.”

This video shows the fermi arc within topological chiral crystals, moving up and down through the crystal.

He added, “We are combining theory and experiments to advance the knowledge frontier.”

The paper, “Topological Chiral Crystals with Helicoid Arc Quantum States” appears in the March 20 issue of Nature. The work at Princeton was supported by the U.S. Department of Energy’s Basic Energy Sciences Division (grant no. DE-FG-02-05ER462000) and the Gordon and Betty Moore Foundation’s Emergent Phenomena in Quantum Systems Initiative (grant no. GBMF4547)