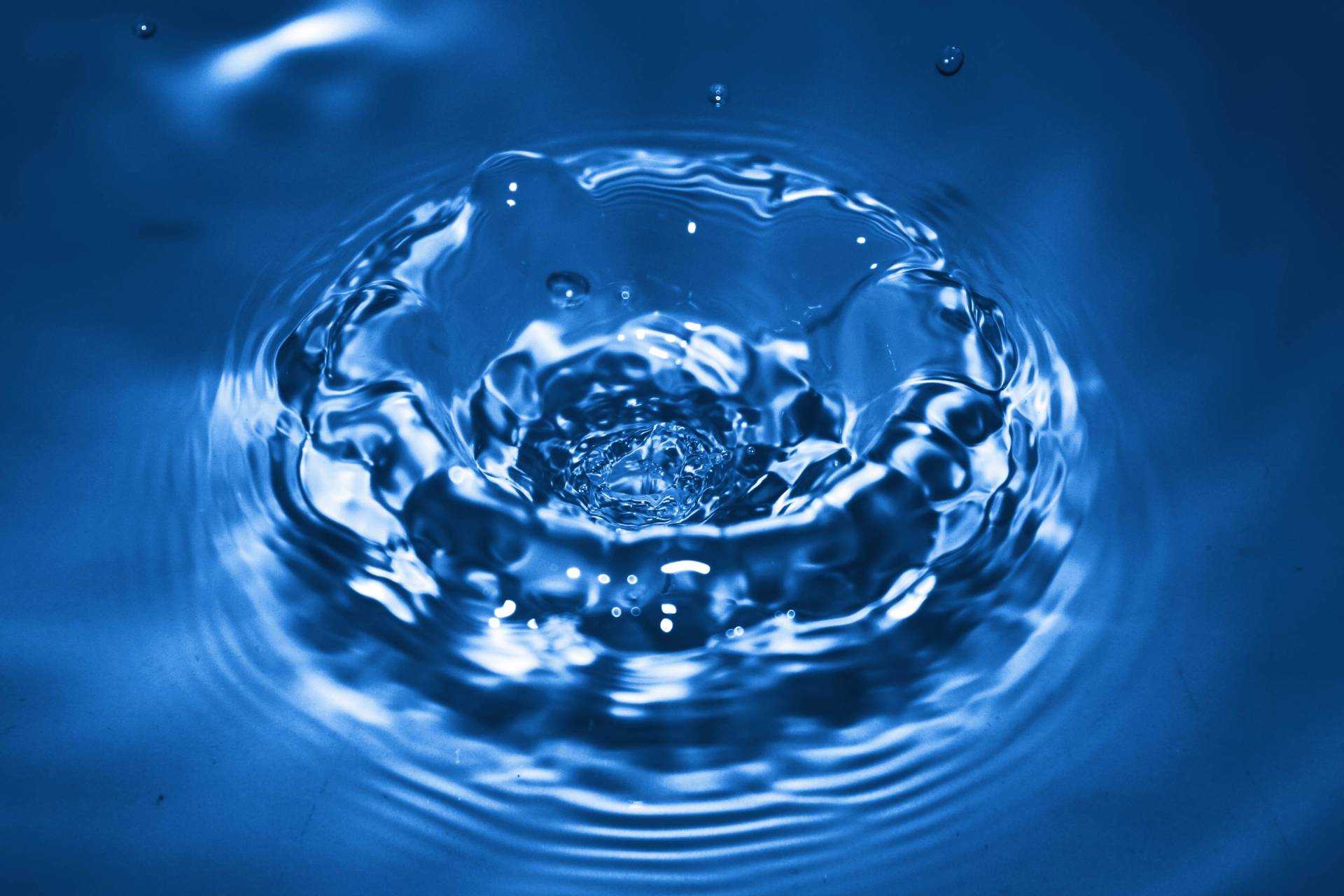 A new study from Princeton University and Sapienza University of Rome provides strong evidence for a controversial theory that at very cold temperatures water can exist in two distinct liquid forms, one being less dense and more structured than the other.

Water, so ordinary and so essential to life, acts in ways that are quite puzzling to scientists. For example, why is ice less dense than water, floating rather than sinking the way other liquids do when they freeze?

Now a new study provides strong evidence for a controversial theory that at very cold temperatures water can exist in two distinct liquid forms, one being less dense and more structured than the other.

Researchers at Princeton University and Sapienza University of Rome conducted computer simulations of water molecules to discover the critical point at which one liquid phase transforms into the other. The study was published this week in the journal Science.

“The presence of the critical point provides a very simple explanation for water’s oddities,” said Princeton’s Dean for Research Pablo Debenedetti, the Class of 1950 Professor in Engineering and Applied Science, and professor of chemical and biological engineering. “The finding of the critical point is equivalent to finding a good, simple explanation for the many things that make water odd, especially at low temperatures.”

Water’s oddities include that as water cools, it expands rather than contracting, which is why frozen water is less dense than liquid water. Water also becomes more squeezable — or compressible — at lower temperatures. There are also at least 17 ways in which its molecules can arrange when frozen.

A critical point is a unique value of temperature and pressure at which two phases of matter become indistinguishable, and it occurs just prior to matter transforming from one phase into the other.

Using two different computational methods and two highly realistic computer models of water, the team identified the liquid-liquid critical point as lying in a range of about 190 to 170 degrees Kelvin (about -117 degrees to -153 degrees Fahrenheit) at about 2,000 times the atmospheric pressure at sea level.

The detection of the critical point is a satisfying step for researchers involved in the decades-old quest to determine the underlying physical explanation for water’s unusual properties. Several decades ago, physicists theorized that cooling water to temperatures below its freezing point while maintaining it as a liquid — a “supercooled” state that occurs in high-altitude clouds — would expose water’s two unique liquid forms at sufficiently high pressures. 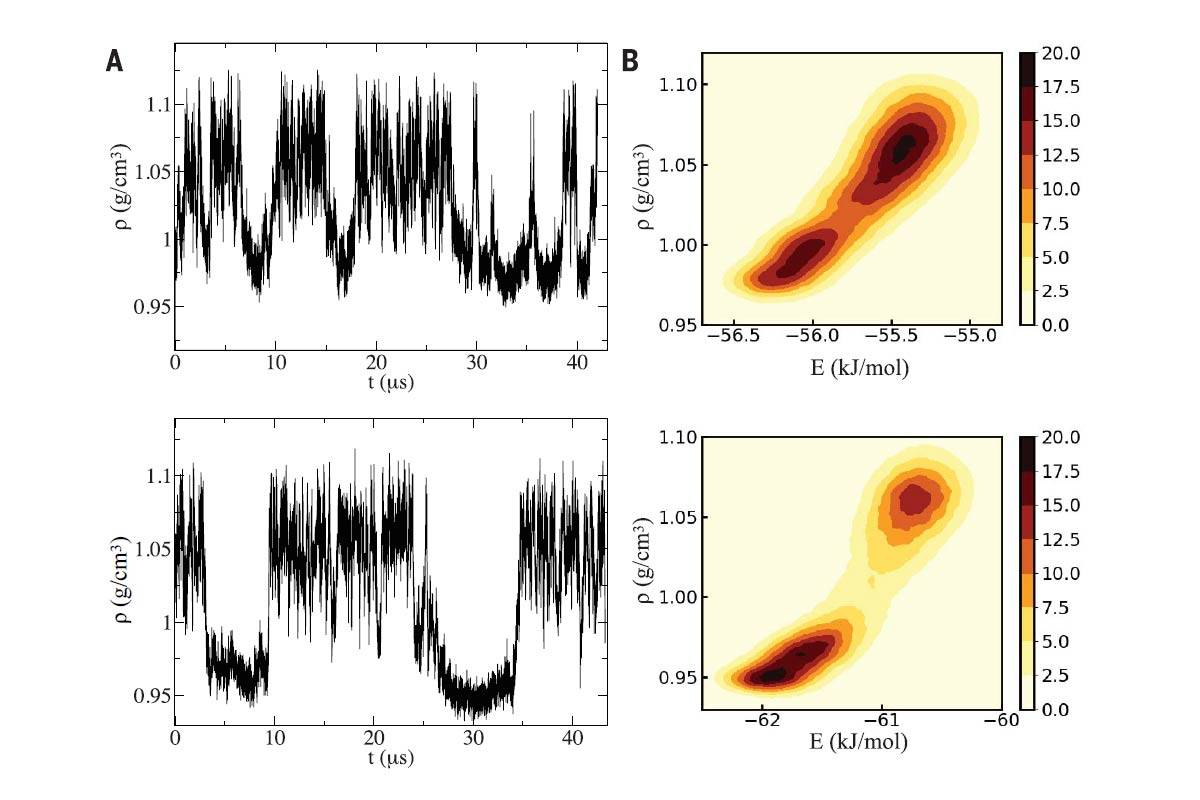 Fig A (left): Using two distinct computer simulations of water (top and bottom panels), researchers detected swings in density characteristic of supercooled water oscillating between two liquid phases that differ by density. Fig B (right): The simulations revealed a critical point between the two liquid phases, whose different densities originate microscopically in the intrusion of an extra water molecule in the local environment of a generic central molecule in the high-density liquid.

To test the theory, researchers turned to computer simulations. Experiments with real-life water molecules have not so far provided unambiguous evidence of a critical point, in part due to the tendency for supercooled water to rapidly freeze into ice.

Francesco Sciortino, a professor of physics at the Sapienza University of Rome, conducted one of the first such modeling studies while a postdoctoral researcher in 1992. That study, published in the journal Nature, was the first to suggest the existence of a critical point between the two liquid forms.

“You can imagine the joy when we started to see the critical fluctuations exactly behaving the way they were supposed to,” Sciortino said. “Now I can sleep well, because after 25 years, my original idea has been confirmed.”

In the case of the two liquid forms of water, the two phases coexist in uneasy equilibrium at temperatures below freezing and at sufficiently high pressures. As the temperature dips, the two liquid phases engage in a tug of war until one wins out and the entire liquid becomes low-density.

In the simulations performed by postdoctoral researcher Gül Zerze at Princeton and Sciortino in Rome, as they brought down the temperature well below freezing into the supercooled range, the density of water fluctuated wildly just as predicted.

Some of the odd behaviors of water are likely to be behind water’s life-giving properties, Zerze said. “The fluid of life is water, but we still don’t know exactly why water is not replaceable by another liquid. We think the reason has to do with the abnormal behavior of water. Other liquids don’t show those behaviors, so this must be linked to water as the liquid of life.”

The two phases of water occur because the water molecule’s shape can lead to two ways of packing together. In the lower density liquid, four molecules cluster around a central fifth molecule in a geometric shape called a tetrahedron. In the higher density liquid, a sixth molecule squeezes in, which has the effect of increasing the local density.

Peter Poole, a professor of physics at St. Francis Xavier University in Canada, and a graduate student when he collaborated with Sciortino and coauthored the 1992 paper in Nature, said the result was satisfying. “It’s very comforting to have this new result,” he said. “It’s been a long and sometimes lonely wait since 1992 to see another unambiguous case of a liquid-liquid phase transition in a realistic water model.”

C. Austen Angell, Regents Professor at Arizona State University, is one of the pioneers of experiments in the 1970s on the nature of supercooled water. “No doubt that this is a heroic effort in the simulation of water physics with a very interesting, and welcome, conclusion,” said Angell, who was not involved in the present study, in an email. “As an experimentalist with access to equilibrium (long-term) physical measurements on real water, I had always felt ‘safe’ from preemption by computer simulators. But the data presented in the new paper shows that this is no longer true.”

The simulations were performed at Princeton Research Computing, a consortium of groups including the Princeton Institute for Computational Science and Engineering (PICSciE) and the Office of Information Technology’s High Performance Computing Center and Visualization Laboratory at Princeton University, and on computational resources managed and supported by the physics department of Sapienza University Rome. Support for the study was provided by the National Science Foundation (grant CHE-1856704).

From left: Pablo Debenedetti, Princeton’s dean for research, the Class of 1950 Professor in Engineering and Applied Science, and professor of chemical and biological engineering; Francesco Sciortino, professor of physics at the Sapienza University of Rome; Gül Zerze, postdoctoral researcher at Princeton.

The study, “Second critical point in two realistic models of water,” by Pablo G. Debenedetti, Francesco Sciortino, and Gül Zerze, was published in the July 17 issue of the journal Science. DOI: 10.1126/science.abb9796.