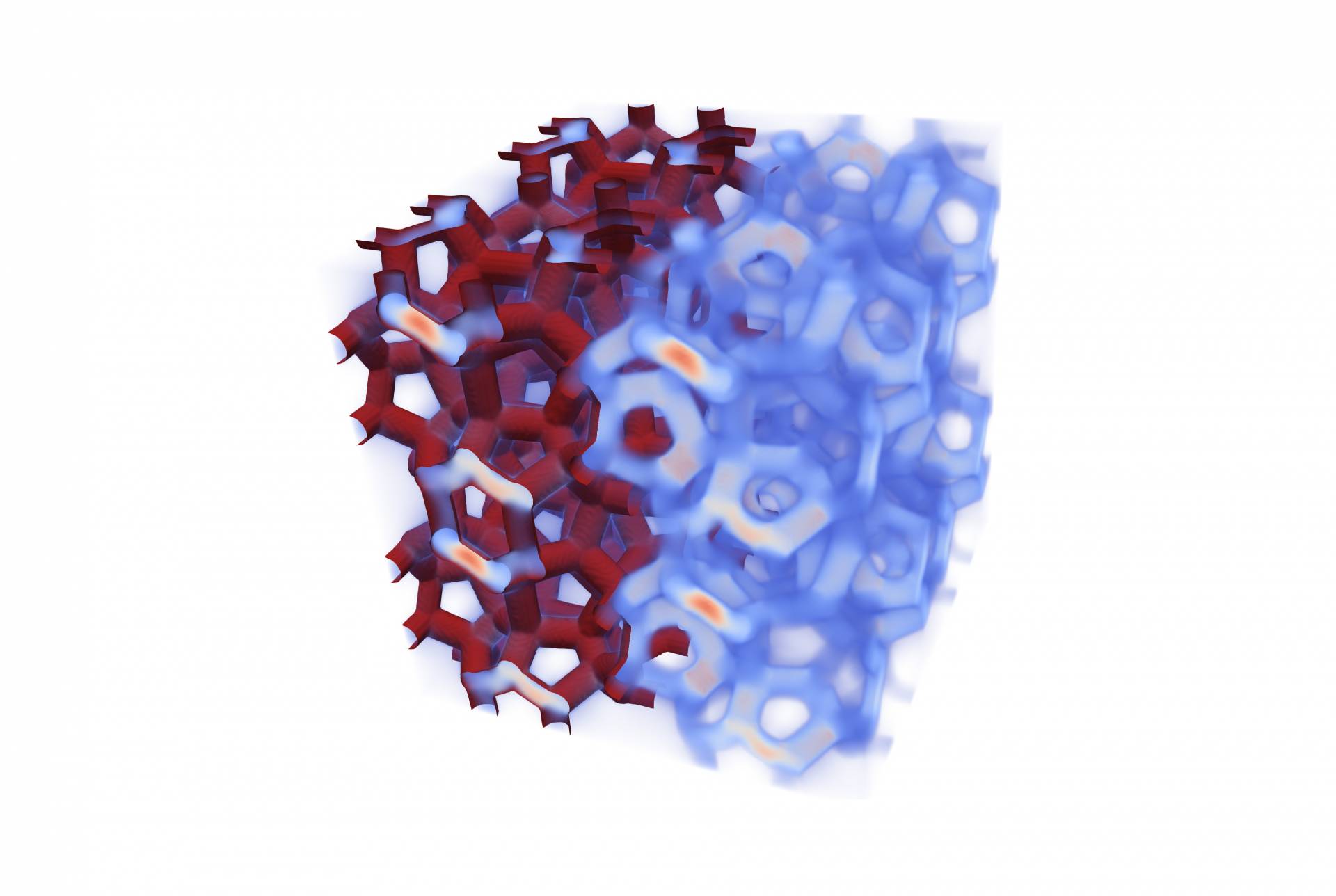 In a combination of physics and materials science, Princeton researchers found that a type of foam can selectively block light, which is important for next-generation devices that compute with light instead of electricity. A computer model of the foam shows the energy density of light (depicted in blue) as it passes through the foam.

There is more to foam than meets the eye. Literally. A study by Princeton scientists has shown that a type of foam long studied by researchers is able to block particular wavelengths of light, a coveted property for next-generation information technology that uses light instead of electricity.

The researchers, integrating expertise from materials science, chemistry and physics, conducted exhaustive computational simulations of a structure known as a Weaire-Phelan foam. They found that this foam would allow some frequencies of light to pass through while completely reflecting others. This selective blocking, known as a photonic band gap, is similar to the behavior of a semiconductor, the bedrock material behind all modern electronics because of its ability to control the flow of electrons at extremely small scales.

"This has the property we want: an omnidirectional mirror for a certain range of frequencies," said Salvatore Torquato, professor of chemistry and the Princeton Institute for the Science and Technology of Materials. Torquato, the Lewis Bernard Professor of Natural Sciences, published the results Nov. 6 in the Proceedings of the National Academy of Science, with co-authors Michael Klatt, a postdoctoral researcher, and physicist Paul Steinhardt, who is Princeton's Albert Einstein Professor in Science.

While numerous examples of photonic band gaps have been shown previously in various types of crystals, the researchers believe that their new finding is the first example in a foam, similar to the froth of soap bubbles or a draft beer. Unlike the disordered foam of beer however, the Weaire-Phelan foam is a precisely structured arrangement with deep roots in mathematics and physics.

The origins of the Weaire-Phelan foam date to 1887 when the Scottish physicist Lord Kelvin proposed a structure for the "ether," the mysterious substance that was then thought to comprise a background structure to all space. Although the concept of the ether was already falling out of favor at the time, Kelvin's proposed foam went on to intrigue mathematicians for a century because it appeared to be the most efficient way to fill space with interlocking geometrical shapes that have the least possible surface area.

In 1993, physicists Denis Weaire and Robert Phelan found an alternative arrangement that requires slightly less surface area. Since then, interest in the Weaire-Phelan structure was mainly in the mathematics, physics and artistic communities. The structure was used as the outer wall of the "Beijing Water Cube" created for the 2008 Olympics. The new finding now makes the structure of interest to materials scientists and technologists.

"You start out with a classical, beautiful problem in geometry, in mathematics, and now suddenly you have this material that opens up a photonic band gap," Torquato said.

Torquato, Klatt and Steinhardt became interested in the Weaire-Phelan foam as a tangent of another project in which they were investigating "hyperuniform" disordered materials as an innovative way to control light. Although not their original focus, the three realized that this precisely structured foam had intriguing properties.

"Little by little, it became apparent that there was something interesting here," Torquato said. "And eventually we said, 'OK, let's put the main project to the side for a while to pursue this.'"

"Always look out for what's at the wayside of research," Klatt added.

Weaire, who was not involved in this new finding, said that the Princeton discovery is part of a broadening interest in the material since he and Phelan discovered it. He said the possible new use in optics likely stems from the material being very isotropic, or not having strongly directional properties.

"The fact that it displays a photonic band gap is very interesting because it turns out to have so many special properties," said Andrew Kraynik, an expert in foams who earned his Ph.D. in chemical engineering from Princeton in 1977 and has studied the Weaire-Phelan foam extensively but was not involved in the Princeton study. Another Princeton connection, said Kraynik, is that a key tool in discovering and analyzing the Weaire-Phelan foam is a software tool called Surface Evolver, which optimizes shapes according to their surface properties and was written by Ken Brakke, who earned his Ph.D. in mathematics at Princeton in 1975.

To show that the Weaire-Phelan foam exhibited the light-controlling properties they were seeking, Klatt developed a meticulous set of calculations that he executed on the supercomputing facilities of the Princeton Institute for Computational Science and Engineering.

"The programs he had to run are really computationally intensive," Torquato said.

The work opens numerous possibilities for further invention, said the researchers, who dubbed the new area of work as "phoamtonics" (a mashup of "foam" and "photonics"). Because foams occur naturally and are relatively easy to make, one possible goal would be to coax raw materials to self-organize into the precise arrangement of the Weaire-Phelan foam, Torquato said.

With further development, the foam could transport and manipulate light used in telecommunications. Currently much of the data traversing the internet is carried by glass fibers. However, at its destination, the light is converted back to electricity. Photonic band gap materials could guide the light much more precisely than conventional fiber optic cables and might serve as optical transistors that perform computations using light.

"Who knows?" said Torquato. "Once you have this as a result, then it provides experimental challenges for the future."