by Jennifer Schieltz for the Office of the Dean for Research 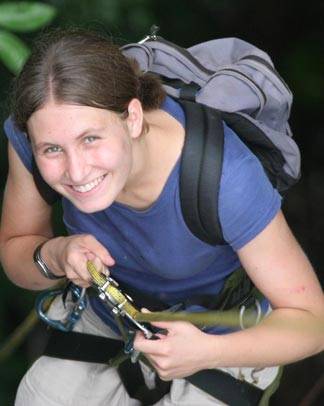 Christina Riehl, a Princeton University graduate alumna and now assistant professor of ecology and evolutionary biology, studies the unique nesting behavior of the bird species the greater ani in Panama. The birds raise their young collectively to protect against predators, but high reproductive competition also prompts them to destroy their nest mates' eggs. Riehl wants to explore the reproductive costs and benefits of group nesting, and inspire her students to investigate animal behavior at a deeper level in the process.

Balanced in a small boat on the reedy edge of a Panama lake, Christina Riehl rigged a camera above the nest of a bird called the greater ani, a species of cuckoo that lives in Central and South America. Checking the footage a few days later, she saw something that had never before been documented in the species. A female ani landed on the nest, cocked her head to inspect the single egg, and then pushed the egg out of the nest and into the water below.

The egg, it turned out, belonged to another female that shared the nest. Riehl was the first to specifically study and document egg-ejection behavior in greater anis (Crotophaga major), and to explain why the birds share nests despite high reproductive competition. At the time, Riehl was a graduate student in Princeton's Department of Ecology and Evolutionary Biology. This fall, four years later, she returned to Princeton as an assistant professor, and a main focus of her research is to explore the reproductive costs and benefits of group nesting. In the process, Riehl hopes to inspire her students to investigate animal behavior at a deeper level.

Riehl's research focuses on the evolution of cooperation and the greater ani's extraordinary breeding behavior. Many species of cuckoos lay their eggs in the nests of other species, but anis nest communally. Up to eight individuals — four breeding pairs — construct a single nest in which all the females lay their eggs, and all group members participate in incubation, defense and food delivery.

In this video, Christina Riehl, assistant professor of ecology and evolutionary biology, explains her research into the costs and benefits of group nesting in a unique species of bird in Panama called the greater ani, and discusses how Princeton makes a lot of exciting research possible. (Video by Jennifer Schieltz for the Office of the Dean for Research)

Reproductive competition within the group is intense, however; before laying her first egg, each female ejects any eggs that have already been laid in the communal nest. Previous researchers found that a female stops ejecting eggs once she has laid her first egg, presumably to avoid accidentally removing her own. As a result, the first female to begin laying eggs in the communal nest invariably loses at least one egg — sometimes several — whereas the last female to lay loses none.

Anis' nests are difficult to study because they are built in low shoreline vegetation accessible only by boat. For her fieldwork in Panama, Riehl must paddle through narrow coves that are choked with waterweeds and stumps — and commonly home to crocodiles.

The egg ejection Riehl caught on film presented technical challenges as well. Egg ejection usually occurs 24 to 48 hours after the first egg is laid, once the other females have had time to come back to the nest and see that the egg is there. But the battery life on Riehl's video cameras was much shorter. She had to play a guessing game of when to put the camera in place.

Riehl and her Panamanian assistants tried to predict where and when the egg-ejection behavior would occur. There were several false alarms. One day, Riehl put up a camera, came back and saw that the egg was gone, and thought that she had finally captured the ejection on film. But when she reviewed the video, she saw that a snake had eaten the egg instead.

After much persistence, Riehl finally captured the egg-ejection footage. "It was really a special moment," she said. The video revealed the significant amount of time and energy it takes for the female to roll the egg out of the nest. The eggs are quite large and it usually takes a couple of tries.

The behavior that Riehl was finally able to capture on film had been proposed by earlier researchers in the 1970s, and it had been documented in two closely related species. However, Riehl was the first to confirm it in greater anis using both video and genetic evidence. "I think there was some satisfaction among more-established behavioral ecologists who were pleased to see the earlier findings both replicated and extended by my work," Riehl said. 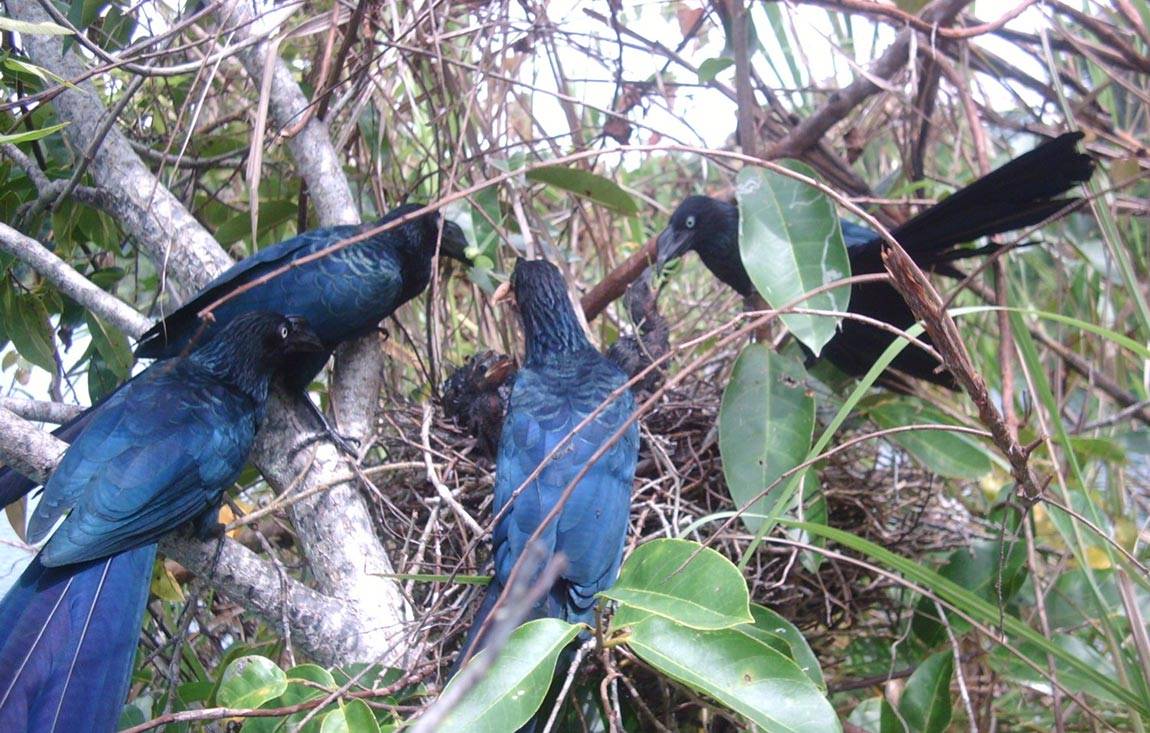 A group of greater anis (Crotophaga major) at a communal nest in Panama. All females in the group lay their eggs in the same nest and all group members participate in parental care of the shared clutch. Reproductive competition within the group is intense, however; before laying her first egg, each female ejects any eggs that have already been laid in the communal nest. (Photo by Christina Riehl, Department of Ecology and Evolutionary Biology)

Riehl's decision to study these birds was "a combination of my own personal interest and serendipity," she said. In graduate school, she went to Panama for the first time to study animal movement with her Ph.D. adviser Martin Wikelski, a former Princeton associate professor of ecology and evolutionary biology who is now the director of the Max Planck Institute for Ornithology in Germany. She was surprised to find that, although greater anis were very common, no one had studied them in the wild. "I knew they were a terrible subject for the study of animal movement, because they don't go anywhere, but they turned out to be a great subject for the study of social behavior," Riehl said.

One example of the birds' fascinating social behavior is that the communally breeding pairs of anis are not genetically related to one another. "This is unusual, and intriguing," Riehl said. "The benefits of cooperative breeding are generally assumed to be through kin selection — an individual helps pass on its genes by helping relatives that share those genes."

Although greater anis sharing a nest are not related, they do benefit directly from breeding in groups, Riehl found in her 2011 paper in the journal Proceedings of the Royal Society B. Larger groups can more easily escape predation by snakes, which attack up to 70 percent of greater ani nests in Panama. Riehl found a strong correlation between the size of the nesting group and the likelihood that the group will be able to compete for a high-quality nesting spot, such as one in a bush or emergent tree surrounded by water. Snakes rarely swim to these isolated nests. 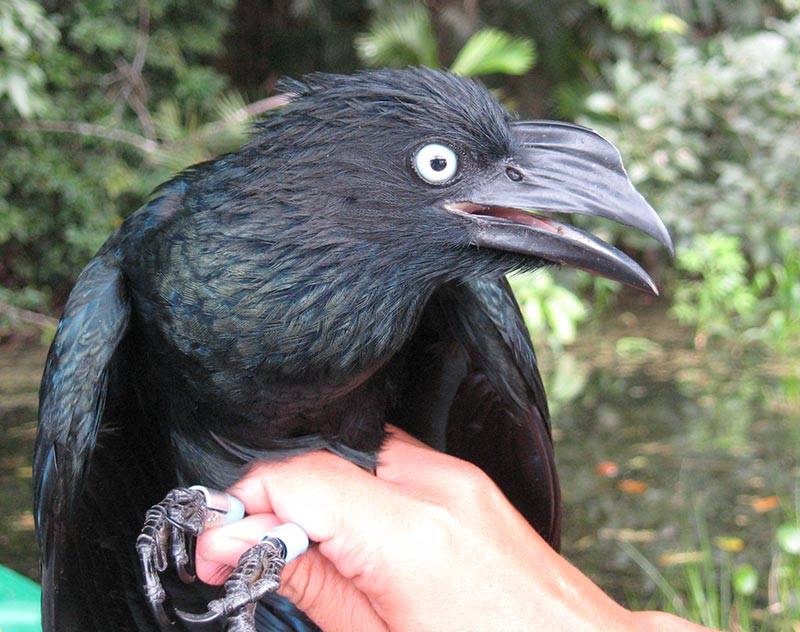 A greater ani is trapped and fitted with leg bands for identification before being released. Riehl's work in Panama was the first to document egg-ejection behavior in greater anis and to explain why birds share nests despite high reproductive competition. (Photo by Christina Riehl, Department of Ecology and Evolutionary Biology)

Riehl said she first became interested in biology "solely through birds." She was an avid bird watcher by age 11. Her parents were neither birders nor scientists, but they always encouraged her. Her dad gave her binoculars and found a field guide for her to use. "The thing I wanted to do more than anything was just go outside with binoculars and identify all of the bird species I could see," Riehl said. "I still love doing that."

This early passion led Riehl to start thinking of careers that would allow her to spend most of her time watching birds. As she learned more about their behavior, she recognized that understanding the evolution of sociality and cooperation is the problem that fascinates her most.

After receiving her doctorate from Princeton in 2011, Riehl entered Harvard University's Society of Fellows to continue her research as a postdoctoral fellow. She is excited to have returned to the department where her work on anis began.

"I think one of the things that is most special about Princeton is the independence it affords its researchers and the amount of interaction between colleagues," Riehl said. "It's the kind of place where you can work with undergraduates and help them design their senior-thesis projects, and where graduate students have a lot of independence. It is a place where the community and the resources make a lot of exciting research possible."

Riehl is excited about the opportunity to do research and teach. She is teaching an undergraduate course in behavioral ecology that introduces students to the array of behaviors found in the animal kingdom and challenges students to think about why behaviors occur and how they might have evolved. The first assignment for the class asked students to go outside and observe a wild animal for 30 minutes, record the animal's behavior, and then think critically about what they had seen. 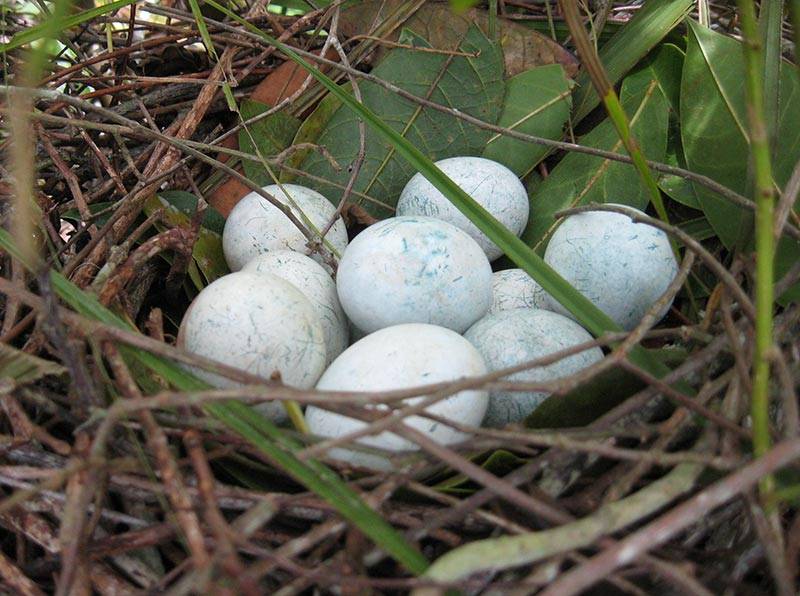 A greater ani communal nest filled with eggs from three different females. Although greater anis sharing a nest are not genetically related, Riehl found that they do benefit directly from breeding in groups because larger groups are better able to compete for a high-quality nesting spot safe from snake predation. (Photo by Christina Riehl, Department of Ecology and Evolutionary Biology)

In her class, students learn to formulate questions and hypotheses and to think of how to test these hypotheses. Riehl looks forward to developing new courses, including field courses for undergraduates, and bringing students to Panama to be involved in her work.

The unanswered question that excites Riehl most about anis is, "How do individuals in groups come to collective decisions together?" Her previous research has shown that it is beneficial to be in a group, but how groups form is still unknown. She also doesn't yet know how they decide things such as where to build the nest or when to start laying eggs.

All members of the group have about equal influence, and they must somehow come to a consensus. If females in a group aren't able to synchronize their reproduction by laying their eggs at the same time, the cost can be very high. The maximum number of eggs Riehl has seen pushed out of one nest is 21, which happened when the first three females in the group had started laying. The last female was behind in her laying cycle and had no eggs, so she just kept pushing the other birds' eggs out. "The females in that group were just not on the same page," Riehl said.

Funding for Riehl's research came from the Princeton Program for Latin American Studies, the Smithsonian Tropical Research Institute and the Harvard Society of Fellows.