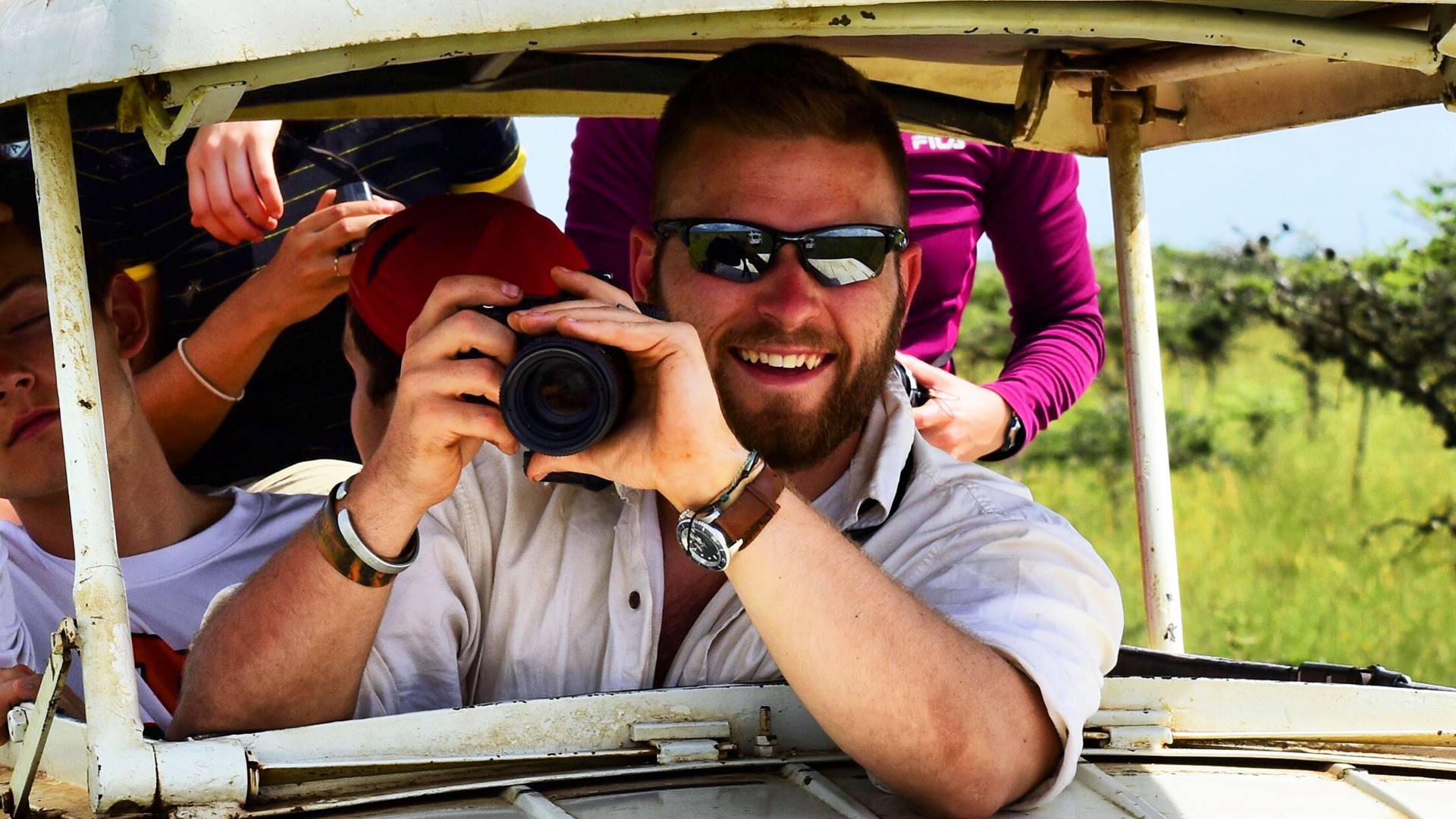 Princeton senior Daniel Petticord conducted his senior thesis research at the Mpala Research Centre in Kenya on the ubiquitous leopard tortoise in order to examine the global-scale relevance of an overlooked animal. He found that drier conditions caused by climate change could increase the animals’ range and the spread of a disease-carrying tick and an invasive plant species borne by the leopard tortoise.

As Princeton senior Daniel Petticord was conceptualizing his thesis on animal movement in the African savanna, he could have chosen to study elephants, zebras, giraffes, impalas or any of the iconic animals that inhabit central Kenya. He chose the ubiquitous leopard tortoise.

“I’ve always been a ‘dig around in the dirt and look for reptiles’ kind of person, so that was a good jumping-off point,” said Petticord, an ecology and evolutionary biology major receiving a certificate in environmental studies. “I really wanted to study snakes, but my adviser told me that the problem with snakes in Africa is that they’re all either really, really fast, or really, really venomous, which are two excellent reasons to not study snakes.”

Each year, the Princeton Environmental Institute (PEI) supports senior-thesis research by students from departments across the University.

Choosing the leopard tortoise, however, extended beyond Petticord’s fascination with the small and scaly. He wanted to explore how overlooked organisms like the leopard tortoise fit into global-scale dynamics such as climate change and ecosystem health. For his thesis, Petticord found that drier conditions on the African savanna brought about by climate change could promote the spread of a livestock disease and an invasive plant species, both of which are carried by the humble leopard tortoise.

“Nobody has any desire to look at a non-endangered tortoise species that can be found all over the world,” Petticord said. “My thesis can be seen as an argument that something seemingly innocuous can be impactful. Even the smallest of organisms are going to have ripple effects due to climate change that we should be considering.” 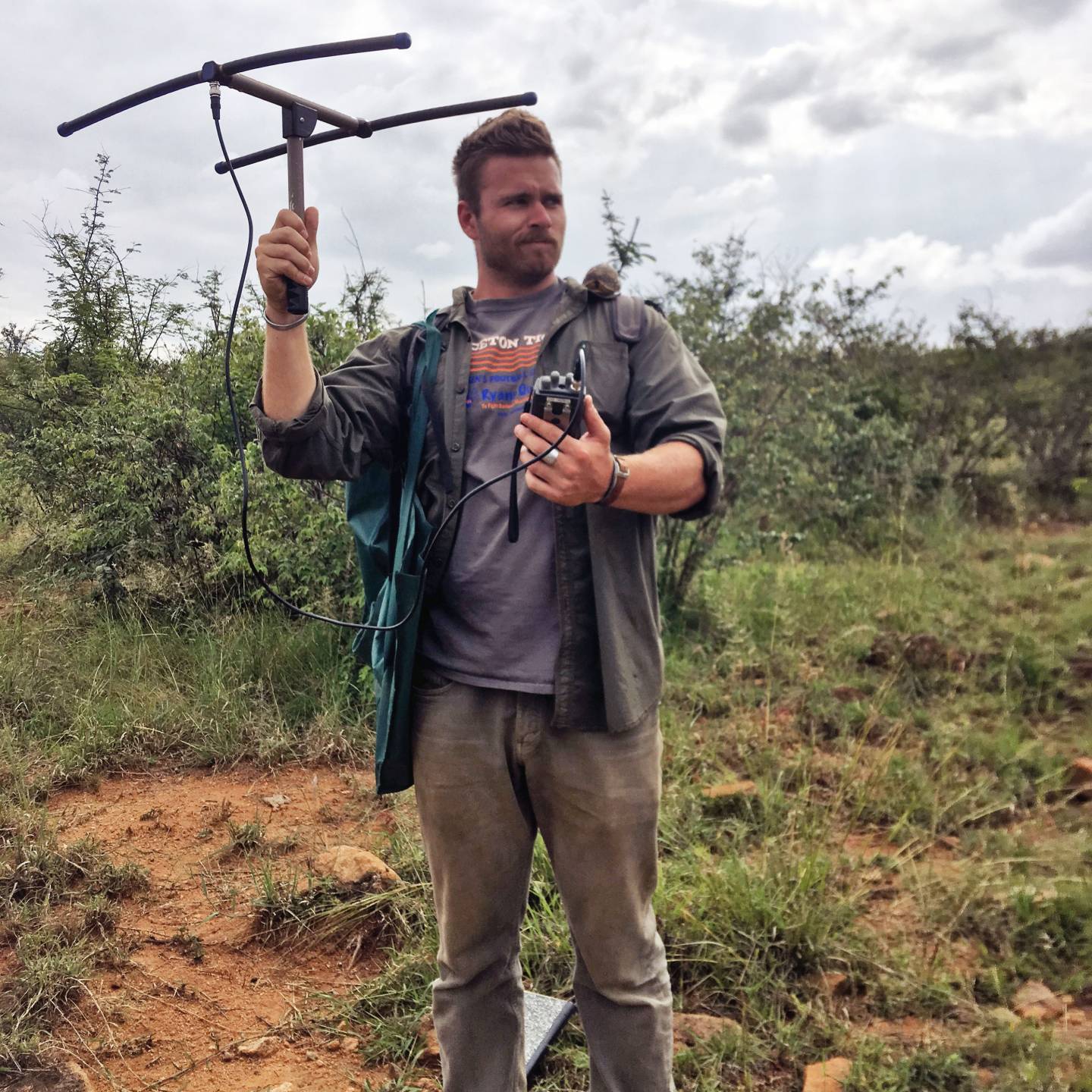 Petticord — pictured above with a VHF radio antenna and a baby tortoise (right shoulder) — outfitted 15 tortoises with radio collars and another five with GPS trackers so he could study the animals’ range in relation to weather. Petticord also observed tortoises in the field to understand their capacity as transporters of the prickly pear and of the bont tick, which can transmit a bacterial infection fatal to livestock.

Robert Pringle, associate professor of ecology and evolutionary biology and Petticord’s thesis adviser, said that Petticord’s findings also suggest that increased droughts will decrease local population densities of leopard tortoises as they forage farther afield for food. Data such as these on the direct effects of climate change on individual species are lacking, he said.

“It’s critically important to understand how climatic change will influence the ecology and behavior of wild animals if we want to have any hope of conserving biodiversity over the next century,” Pringle said.

“We have an increasingly sophisticated understanding of many natural phenomena, yet we know next to nothing about the basic ecology and behavior of the vast majority of species,” he said. “Research such as Dan’s helps to plug those gaps and provide a scientific foundation for anticipating and ameliorating the impacts of environmental changes caused by humans.”

Petticord conducted his research at Kenya’s Mpala Research Centre — of which Princeton is a managing partner — with support from the Becky Colvin Memorial Award presented annually by the Princeton Environmental Institute (PEI) and the Department of Ecology and Evolutionary Biology, as well as through a 2018 PEI Environmental Scholar award.

Petticord outfitted 15 tortoises with radio collars and another five with GPS trackers that beamed back movement data every six hours between June 2018 and April 2019. The collars and trackers allowed him to study the animals’ range in relation to weather. He found that the tortoises indeed roamed farther in dry conditions than in wet.

In the meantime, Petticord observed tortoises in the field to understand their capacity as transporters of the prickly pear and of the bont tick, which transmits a bacterial infection known as “heartwater” through its bite.

Both can be fatal to the cattle that pastoralist tribes such as the Masai base not only their livelihoods, but their social stability. The prickly pear — introduced by British colonists as natural fencing — features spines that can lacerate the mouths of cattle, leading to deadly infections, Petticord said. Heartwater affects multi-stomached animals such as cattle and sheep, in many cases leading to the buildup of fluid around the lungs and heart.

“For pastoralists, this is the end of the line,” Petticord said. “All you have is your herd. If you lose that, you have to figure something else out. And they’re already pressured by droughts and an increasing lack of water.”

Petticord counted the bont ticks living on the leopard tortoises he studied and found that each individual tortoise carries between 30 to 40 ticks. He also analyzed the tortoises’ droppings and found that the animals scatter the undigested seeds of the prickly pear — the fruit of which they’re known to favor — through their dung.

“My work made me think a lot about a Jenga tower,” Petticord said. “When you push or prod one piece a lot, or a lot of pieces a little, you can weaken the stability of the entire structure. In a developing country, a stressor like this, even as small as a tortoise, can be huge.”

An important aspect of Petticord’s work is that he was able to closely and easily observe the same individual animals repeatedly, Pringle said. That allowed him to see the diversity of each animal’s behavior and diet — he found the remains of 12 plant species in various concentrations in the droppings he collected — with a level of detail that can be difficult to attain from studying larger, faster or more dangerous creatures, Pringle said. 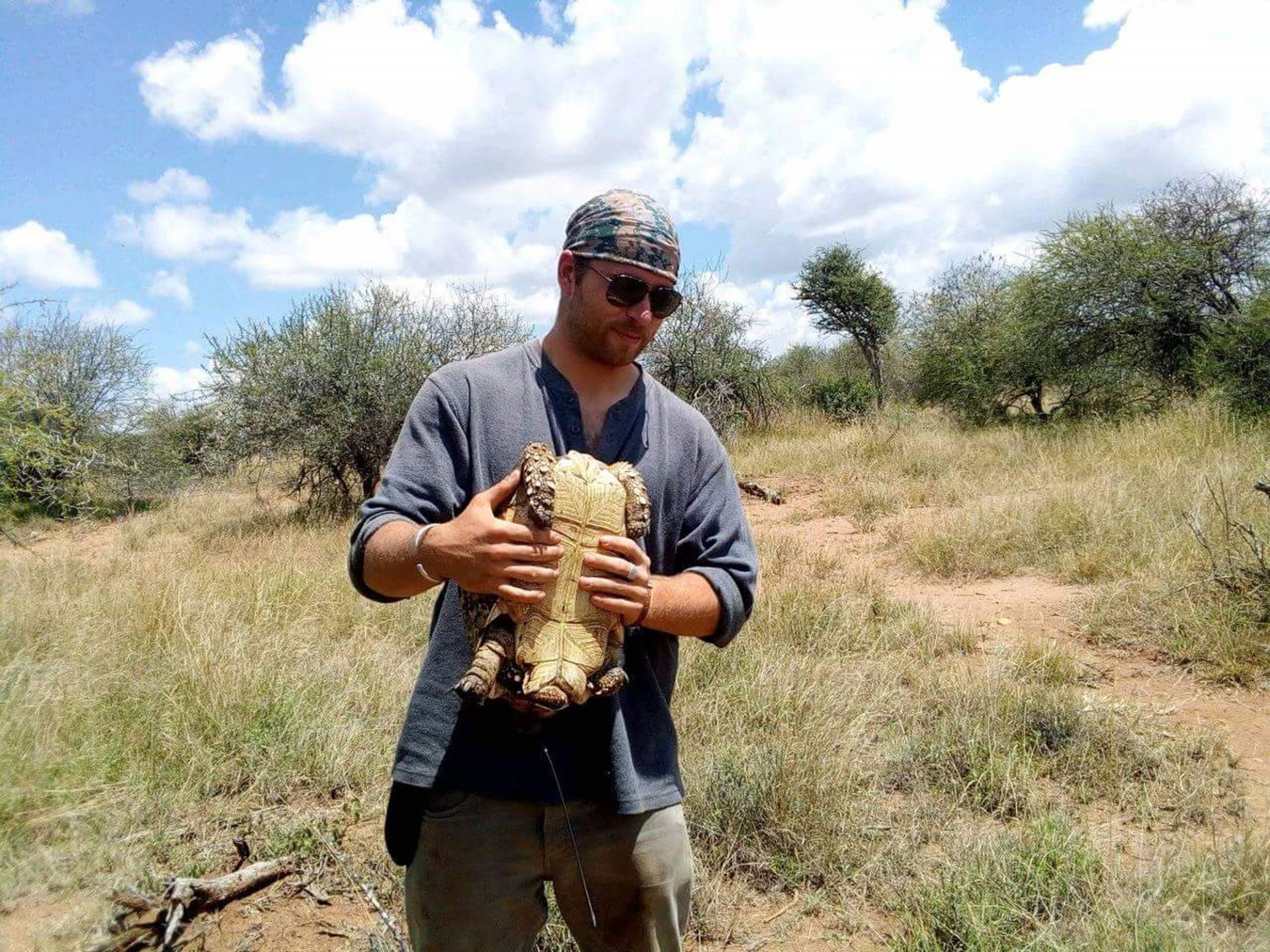 Because leopard tortoises are docile, Petticord was able to closely and easily observe the same individual animals repeatedly, which provided exceptional detail of each animal’s behavior and diet.

“We have thus far been unable to do that with larger wildlife species such as elephants, zebras and antelopes, but Dan’s work showed why it’s so important to try,” Pringle said. “We tend to assume that different individuals of a species eat mostly the same things, but Dan’s work showed that this is not the case — different individuals actually had very different and more-specialized diets. This shows that we really need to understand individual variation in order to be able to interpret broader patterns in ecology.”

To determine the variety of plants that leopard tortoises eat, Petticord used a technique pioneered in the Pringle lab known as DNA metabarcoding that identifies the plant species contained in a dung sample by their genetic code. “Every time we use this technique to study a new species such as leopard tortoises, we find surprises,” Pringle said. “Dan’s results showed that leopard tortoises at Mpala, which have been assumed to eat mostly grasses, ate mostly legumes.”

After graduation, Petticord — who wants to be a professional ecologist — will spend a year in Panama as a Smithsonian Research Fellow working on soil-plant interactions, then spend a year as a Fulbright Fellow researching and reporting on coral reef/coastal fishery conservation in Grenada.

He hopes that his Princeton senior thesis work can be used to understand the intricacies and sensitivities of the African savanna that he came to cherish during his time at Princeton. Petticord first went to Mpala as a 2017 PEI Summer Intern where he worked to troubleshoot open-source software that identifies large-scale topography via drone and was advised by Daniel Rubenstein, the Class of 1877 Professor of Zoology and professor of ecology and evolutionary biology and director of the Program in Environmental Studies based in PEI.

“Everything stemmed from that experience,” Petticord said. “They say you lose part of your heart to Africa when you go there, and I really think that’s true.”