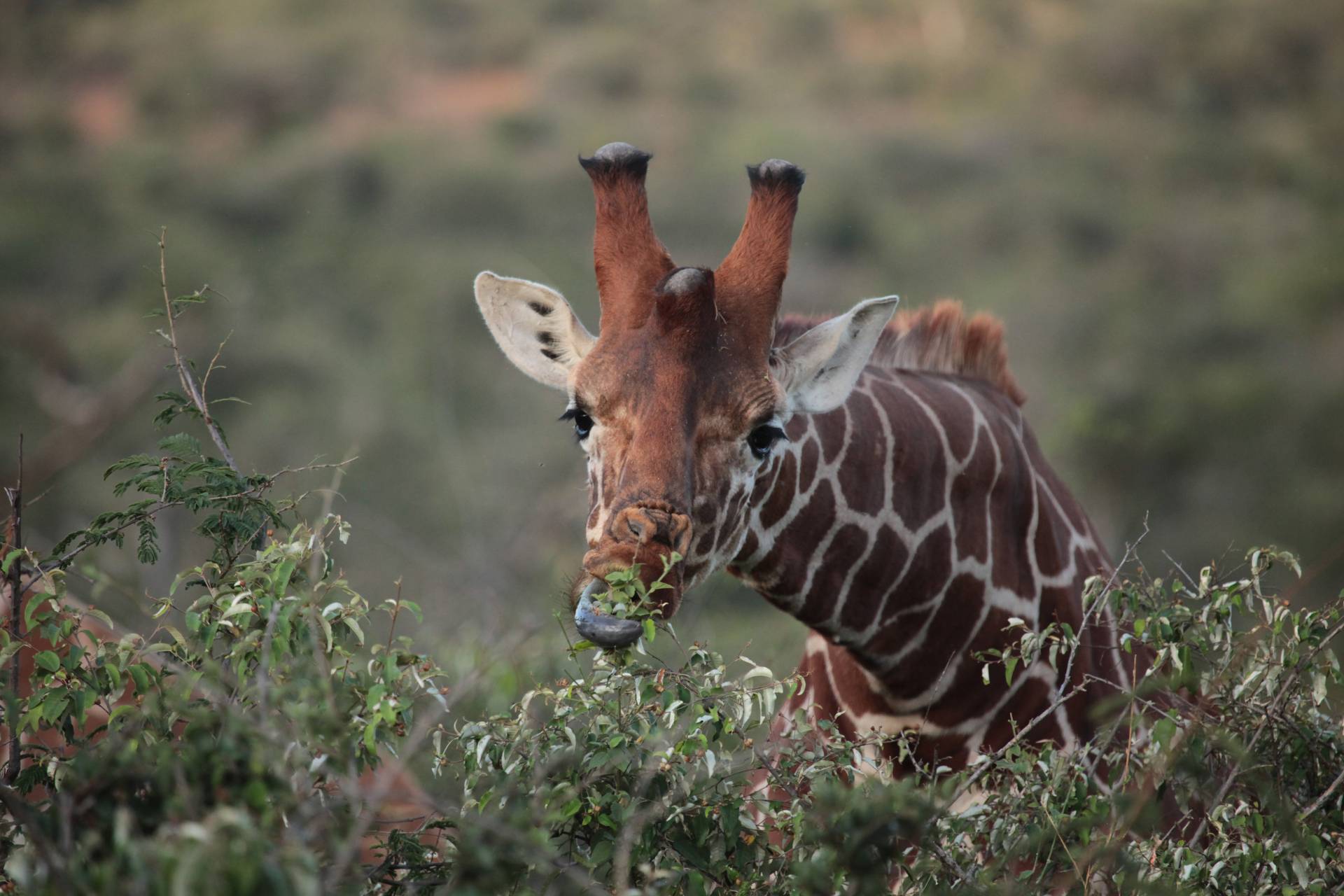 A reticulated giraffe selects a mouthful of a Hibiscus plant at the Mpala Research Centre in central Kenya. The researchers analyzed plant DNA in animal fecal samples to quantify the diet composition for 33 herbivore species.

In recent years, the field of microbiome research has grown rapidly, providing newfound knowledge — and newfound questions — about the microbes that inhabit human and animal bodies. A new study adds to that foundation of knowledge by using DNA analysis to examine the relationship between diet, the environment and the microbiome.

“Environmental change may influence what animals are eating, and as a consequence, influence their microbiome and health in a variety of ways that can only be understood in natural settings,” said study lead author Tyler Kartzinel, an assistant professor of ecology and evolutionary biology at Brown University and a former postdoctoral researcher at Princeton University.

He added that the study’s innovative DNA-based methods might ultimately provide new avenues to study and understand human microbiomes as well.

Tyler Kartzinel collects a fecal sample at the Ol Jogi Conservancy in central Kenya. The researchers analyzed over 1,000 fecal samples.

The research, published in the Proceedings of the National Academy of Sciences on Monday, Nov. 4, involved collecting and analyzing more than 1,000 samples of fecal material from 33 herbivore species — which ranged from diminutive dwarf antelopes to gigantic giraffes and elephants — in an African savanna.

To build on the findings of earlier studies, the research team — a collaboration of scientists in the ecology and evolutionary biology departments at Brown and Princeton, and colleagues from the botany department of the National Museums of Kenya — sought to study a wide variety of species by analyzing samples gathered from their natural habitat.

Much of the fieldwork was done at the Mpala Research Centre in Kenya, which is managed by Princeton University in partnership with the Smithsonian Institution, the National Museums of Kenya and the Kenya Wildlife Service.

“A fecal sample provides an amazing window into the biology of a wild animal, from what it eats to what bacteria live in its gut to what kinds of parasites it has,” said Robert Pringle, an associate professor of ecology and evolutionary biology at Princeton and the senior author on the study. “We’re just starting to tap into the potential of what forensic DNA-based approaches to wildlife ecology can teach us about these things that have historically been very difficult if not impossible to investigate.”

After analyzing the DNA in the samples to infer the animals’ diets and microbiomes, the researchers reached three main conclusions. Consistent with their expectations, they found that closely related species had similar microbiomes, and, to a lesser extent, similar diets.

Their second finding was that species (and individual animals within a species) who consumed dissimilar diets tended to have dissimilar microbiomes.

Lastly, the study found that animals whose diets underwent significant seasonal changes also tended to experience major seasonal changes in their microbiomes. But the team was surprised to find that the microbiomes of domesticated species such as cattle, sheep, goats, donkeys and camels tended to change more with the seasons than did the microbiomes of wild animals — even compared to the most closely related wild animals that had similar diets.

Kartzinel suggested three possible factors that might explain the microbiome differences between livestock and wild animals: domestication, guidance of livestock to optimal food and water sources by human herders, and the protection of livestock in corrals at night. Together with his colleagues, he plans to explore precisely why some species’ microbiomes are more sensitive to seasonal change.

Kartzinel noted that the methods employed in the study allowed for a deeper level of analysis. In the past, researchers studied microbiomes in one of two ways: Some researchers conducted “between-species” research, examining the microbiomes of a few animals representing different species — comparing, say, the microbiome of a sheep with that of a cow. Others conducted “within-species research,” comparing the microbiomes of many more animals from the same species — across, say, different seasons. However, because Kartzinel and his colleagues analyzed DNA to measure diet from individual samples collected from many different species in the same environment, they were able to conduct between-species and within-species research simultaneously.

“The work we’re publishing begins to bridge those findings, making the relationships seem less binary,” Kartzinel said. “Seasonal change isn’t just present or absent, for example; we found instead that there’s a gradient between the microbiomes that respond a lot and those that respond a little.”

A variety of additional questions arise from the research. For example, is seasonal sensitivity in the microbiome a sign of health or a sign of trouble?

More broadly, Kartzinel and his colleagues also hope to determine which factor — diet or microbiome — tends to be more sensitive to the animal’s environment. “The same plant can provide succulent fruit for animals to eat in one season, and only offer chewy twigs in the next — if the animal eats it in both seasons, our methods wouldn’t register a change in that animal’s diet, but the animal’s gut microbiome would,” he said. 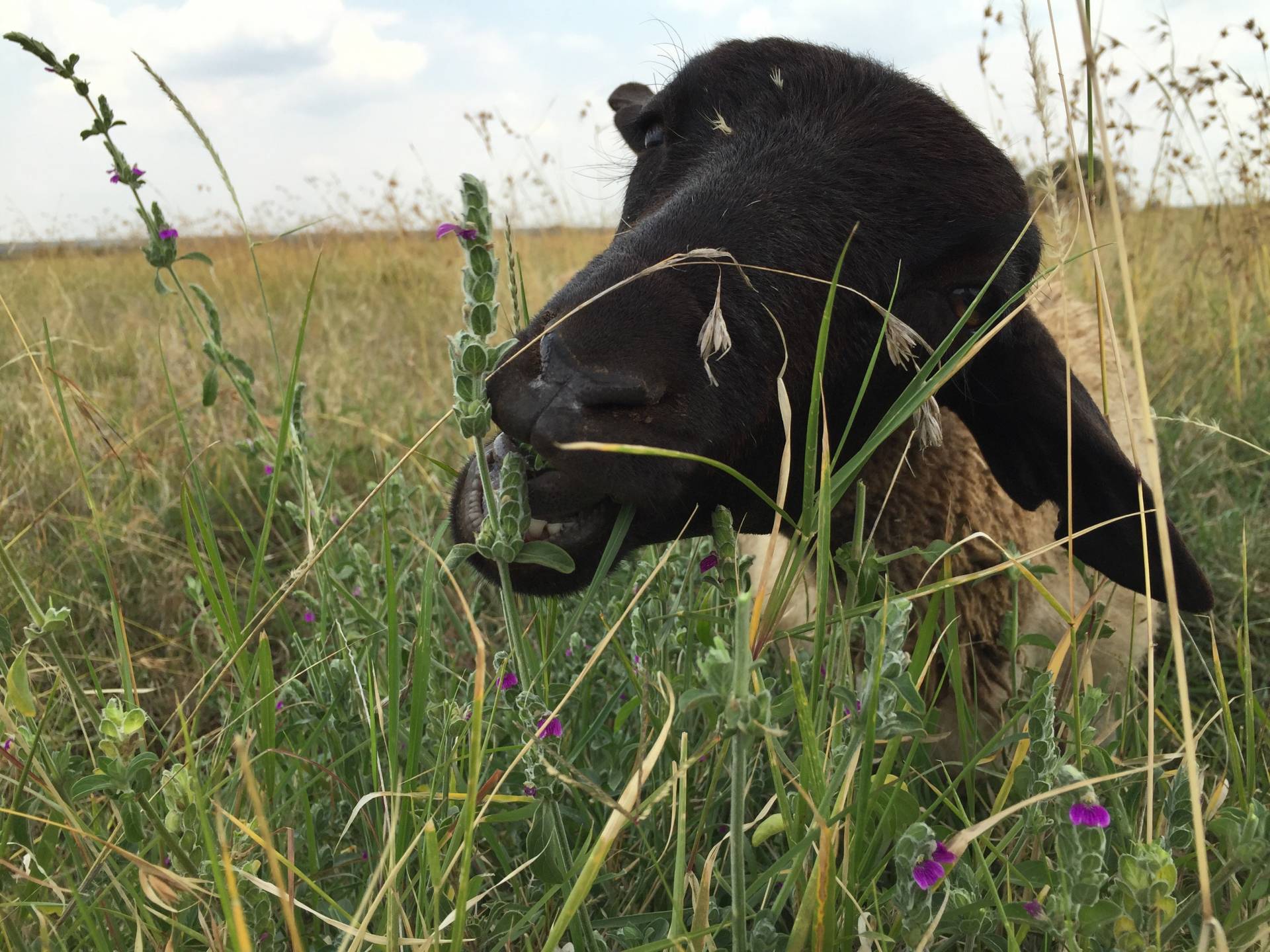 A sheep eats a Justicia plant at the Mpala Research Centre. The researchers found that domesticated animals such as sheep, cattle and camels had more variable diets and microbiomes than wildlife species.

He’d also like to explore experiments to determine the importance of diet and microbiome turnover for the health of wild animals.

“Is the sensitivity of a herbivore’s microbiome going to help it keep a healthy diet in a changing world?” he asked. “Or do other adjustments and conditions take precedent as the animal makes decisions about how to survive? Maybe it’s a little bit of both. We're talking about several endangered species, and the livestock people depend on, so it's important to consider the possibilities.”

If the microbiome does significantly influence animal health and behavior, Kartzinel said, then it could “affect entire food webs, communities and ecosystems, because it would determine who survives and who does not. It’s amazing to think about.”

He added that in collaboration with a broader set of colleagues, the team is beginning to tap into the possibility that this research could affect humans.

“The biomedical world is really interested in figuring out whether — and how — we can manage the human gut microbiome to improve health, stress and nutrition,” Kartzinel said. “Together with a whole suite of research approaches, we think these genetic methods of connecting diet and microbiome could provide an additional layer of information — for wildlife ecologists and biomedical researchers, too.”

Julianna Hsing, who graduated from Princeton with a bachelor’s degree in ecology and evolutionary biology in 2016, participated in the laboratory research as part of her senior thesis. Bianca Brown, who is a Ph.D. candidate in ecology and evolutionary biology at Brown, conducted computational analyses on the microbiome. Paul Musili from the National Museums of Kenya was an additional contributor.

The study was funded by the Institute at Brown for Environment and Society, the Nature Conservancy’s NatureNet Fellowship, the Princeton Environmental Institute, Princeton’s Fund for New Ideas in the Natural Sciences from the Office of the Dean for Research, the Cameron Schrier Foundation, the National Science Foundation (DEB-1355122, DEB-1457697 and IOS-1656527) and the Graduate Research Fellowship Program.