In the basement of Hoyt Laboratory at Princeton University, Alexei Tyryshkin clicked a computer mouse and sent a burst of microwaves washing across a silicon crystal suspended in a frozen cylinder of stainless steel.

The waves pulsed like distant music across the crystal and deep within its heart, billions of electrons started spinning to their beat.

Reaching into the silicon crystal and choreographing the dance of 100 billion infinitesimal particles is an impressive achievement on its own, but it is also a stride toward developing the technology for powerful machines known as quantum computers.

"Standard computers have come to their limit and cannot do some of the things we want," said Tyryshkin, a research scholar in the Department of Electrical Engineering. "We are trying to find a different way of doing computing, using additional degrees of freedom involving quantum computing and things like spins." 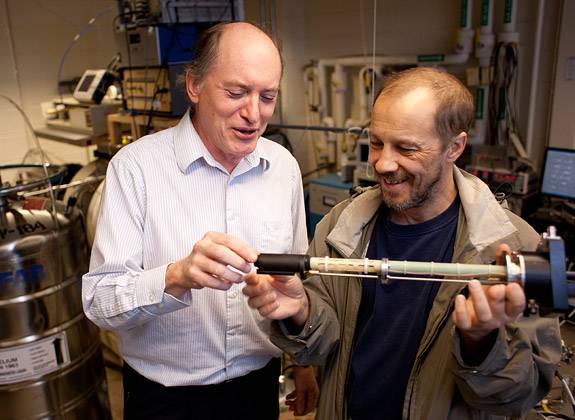 Electrical engineers Stephen Lyon (left) and Alexei Tyryshkin examine the casing that holds the silicon crystal they used to coordinate the spins of billions of electrons in work toward developing the technology for powerful machines known as quantum computers. (Photo by John Jameson)

Using the spins of subatomic particles such as electrons offers a path to developing a machine that would apply the reality-bending rules of quantum mechanics to arrive at new and powerful ways to approach difficult mathematical problems. But maintaining that control for long enough to build a working computer has proven incredibly difficult.

Until recently, the best attempts at such control lasted for only a fraction of a second. But researchers at Princeton led by Stephen Lyon, a professor of electrical engineering, have found a way to extend their control over the spins of billions of electrons for up to 10 seconds.

The researchers, part of an international team, reported their results online Dec. 4 in Nature Materials. The research at Princeton was supported by the National Science Foundation and the National Security Agency.

Lyon said the key to the new results lies in the use of a highly purified sample of silicon. The experiment uses a small silicon chip the size of a pencil lead made almost entirely of a particular isotope of silicon: silicon-28.

"Partly, it is an improvement in our measurements, but it is mainly the material," Lyon said. "This is the purest sample we have ever used."

To achieve their results, the researchers suspended the sample of pure silicon inside a cylinder filled with liquid helium, dropping its temperature to 2 degrees Kelvin (-455.8 degrees Fahrenheit, just above absolute zero.) They locked the cylinder between two doughnut-shaped rings about the size of pizza boxes that control the magnetic field around the sample. Tyryshkin's mouse click sent microwaves through the silicon, and coordinated the spins of about 100 billion electrons.

The highly purified sample of silicon-28 used in the experiment led by Lyon has a very low magnetic signature at the atomic level, and therefore does not disrupt the spin of the electrons. (Photo by John Jameson)

"The first pulse twists them, the second reverses them, and at some point the sample itself produces a microwave pulse, and we call that the echo," Lyon said. "By doing the second pulse, getting everything to reverse, we get the electrons into phase."

Describing the electrons' phase, or the state in which they exist, can be tricky, like a lot of things in quantum mechanics. When scientists talk about electrons, they use the term "spin." For subatomic particles such as electrons, spin is a fundamental characteristic that can make them behave like tiny magnets. Lyon's team uses this magnetic signature to determine whether or not the electrons are in phase.

Maintaining the spinning phase is what scientists call "coherence." Unlike objects in the everyday world, subatomic particles, which operate under the rules of quantum mechanics, can be in more than one place at the same time. Electrons' spin, for example, can be classified as up, down, or in superposition, a state that is both up and down simultaneously. It is this superposition state that allows for the highly complex mathematics at the heart of quantum computing.

A standard computer uses transistors either switched off or on to represent 0s and 1s, the bits of information that make up the basis of all computer programs. Instead of this binary language, a quantum computer would incorporate the uncertainty of quantum mechanics into its programming. Instead of bits, the computers will use quantum bits or qubits — values that are inherently indeterminate.

The real power of a quantum computer, however, lies in the mathematics that underlies behavior at the quantum level. Scott Aaronson, an associate professor of electrical engineering and computer science at the Massachusetts Institute of Technology, said that quantum mechanics are based on complex numbers called amplitudes, which are like probabilities but can also express the concept of a negative probability. Mathematicians can write instructions that allow a quantum computer to reinforce amplitudes that lead to a correct answer while allowing incorrect ones to cancel each other out.

"The idea is to choreograph the amplitudes in a way that leads to the correct solution," Aaronson said.

Mathematicians are still working on ways to take advantage of such a machine. They believe it could be used to factor incredibly large numbers, break cryptographic codes or to simulate the behavior of molecules.

Although mathematically fascinating, keeping electrons in this indeterminate state is extremely difficult. In a 2003 report in Physical Review B, Lyon's group reported a breakthrough when they maintained coherence for 60 milliseconds (a millisecond is one thousandth of a second).

Extending coherence time is an important step toward building a working computer. The key is to maintain coherence long enough for programs to correct and maintain data before the spins lose their coherence. It is hard to set a threshold for the length of coherence needed for a practical computer, because it depends on the type of program and size of the computer.

To understand why it is so hard, imagine circus performers spinning plates on the top of sticks. Now imagine a strong wind blasting across the performance space, upending the plates and sending them crashing to the ground. In the subatomic realm, that wind is magnetism, and much of the effort in the experiment goes to minimizing its effect. By using a magnetically calm material like silicon-28, the researchers are able to keep the electrons spinning together for much longer.

"The project started 10 years ago," said Tyryshkin. "Steve came into my office saying let's try a sample that is clean of other isotopes."

Three years later, the team reported their first results in Physical Review B. Lyon said the experiment is a successor to one performed in 1958 at Bell Labs by James Gordon, one of the co-inventors of the maser, the predecessor to the laser. Using technology available at the time, Gordon was able to maintain coherence for 600 microseconds (a microsecond is one millionth of second).

Chasing ever-longer periods of control, Lyon and Tyryshkin tried a series of different samples of increasingly purified silicon. The answer finally came through results from the Avogadro Project, an international effort to create a pure kilogram of silicon for use as a standard measurement. Michael Thewalt, a physics professor at Simon Fraser University and Kohei Itoh, a professor at Keio University,  co-authors of the recent paper with Lyon, had been working with the Avogadro Project and requested a special sample for use in the electron-spinning experiment.

"The isotope enrichment was done in Russia, near St. Petersburg, and the crystal itself is grown in Germany," Thewalt said.

Elements are identified by the number of protons inside their nucleus: carbon has six protons, silicon has 14. But most elements come in different versions — called isotopes — determined by the number of neutrons. Some isotopes, like silicon-28, have no magnetic field, while others create a strong magnetic effect at atomic level. A relatively common isotope of silicon, silicon-29, has a very strong magnetic presence and, therefore was a prime target for elimination because of the effect its magnetism would have on the electrons' spins.

The combined effort of the Russian and German teams largely eliminated isotopes of silicon that create a strong magnetic field — like silicon-29 — and other impurities. The scientists managed to clean the sample significantly: silicon-29, which usually makes up nearly 50,000 parts per million of a typical sample, was reduced to 50 parts per million in the chip sent to the Princeton team. In fact, the final silicon crystal was so pure that the scientists in Berlin added a trace amount of phosphorous so the sample would be electrically active enough to respond to the microwave pulse in the laboratory. That response, which researchers call "the echo," is how they read the electrons' spin state. So calibrating the correct amount of phosphorous was critical — too much would create the magnetic noise that the team was trying to eliminate, but too little would leave the echo too faint to detect.

"A lot of the work boils down to getting the phosphorous far enough apart," Lyon said, who noted that temperature is also critical. At room temperature, the electrons from the phosphorous are too active, and prevent the control that the team is trying to exert. But once the researchers use liquid helium to drop the sample's temperature to 2 Kelvin, everything calms down.

Besides Tyryshkin, Lyon, Thewalt, and Itoh, the team that contributed to the work described in the Nature Materials article included Shinichi Tojo of Keio University; John Morton of the University  of Oxford; Helge Riemann and Nikolai Abrosimov of the Institut für Kristallzüchtung; Peter Becker of Physikalisch-Technische Bundesanstalt; Hans-Joachim Pohl, of VITCON Projectconsult GMBH; and Thomas Schenkel of Lawrence Berkeley National Laboratory.

Other researchers have attained similar coherence times using ions in a vacuum instead of a solid material such as silicon. Engineers using these systems have performed some mathematical operations with up to 15 of these qubits. But Lyon's team chose to work with silicon instead of vacuum tubes because they believe it is more practical to attempt to scale up the material for use in a computer. Vacuum tubes, which function by running electricity through a vacuum, have largely been replaced in electronic devices by solid materials such as silicon that are easier to build, more reliable and last longer.

"It would be far easier to build devices out of silicon, but we still have to do many other things before we can get to that point," he said.

"Right now, we are using one," Tyryshkin said. "If we could come up with a thousand, that would be a very interesting machine."