A rare and exotic mineral, so unusual that it was thought impossible to exist, came to Earth on a meteorite, according to an international team of researchers led by Princeton University scientists. The discovery provides evidence for the extraterrestrial origins of the world's only known sample of a naturally occurring quasicrystal.

Found in a rock collected in a remote corner of far eastern Russia, the natural quasicrystal was most likely formed during the early days of the solar system, roughly 4.5 billion years ago, making the mineral perhaps older than the Earth itself, according to the research team. The results, which come three years after the team identified the mineral as the first natural quasicrystal, recently were published in the Proceedings of the National Academy of Sciences.

"The finding is important evidence that quasicrystals can form in nature under astrophysical conditions, and provides evidence that this phase of matter can remain stable over billions of years," said physicist Paul Steinhardt, the Albert Einstein Professor in Science at Princeton and one of the leaders of the research. 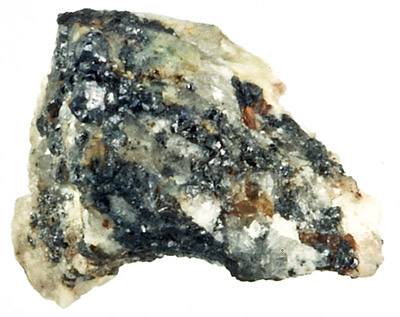 The rock sample from the mineral collection of the Museo di Storia Naturale in Florence was unearthed in the Koryak Mountains in Russia and found to include grains of icosahedrite, the first quasicrystalline mineral to be discovered in nature. Analysis of the oxygen isotope abundances in the rock indicate it is a fragment of a meteorite formed at the formation of the solar system over 4.5 billion years ago. (Image courtesy of Luca Bindi)

Although quasicrystals are solid minerals that look quite normal on the outside, their inner structure makes them fascinating to scientists. Instead of the regularly repeating clusters of atoms seen in most crystals, quasicrystals contain a more subtle and intricate atomic arrangement involving two or more repeating clusters. As a result, a quasicrystal's atoms can be arranged in ways that are not commonly found in crystals, such as the shape of a 20-sided icosahedron with the symmetry of a soccer ball.

The concept of quasicrystals — along with the term — was first introduced in 1984 by Steinhardt and Dov Levine, both then at the University of Pennsylvania. The first synthetic quasicrystal, a combination of aluminum and manganese, was reported in 1984 by Israeli materials scientist Dan Shechtman and colleagues at the U.S. National Institute of Standards and Technology, a finding for which Shechtman won the 2011 Nobel Prize.

Since Shechtman's work was published, scientists have created about 100 types of synthetic quasicrystals, some of which are now used in durable coatings and surgical blades. Scientists are also exploring them for use in frying-pan coatings and heat insulation for engines.

The search for natural quasicrystals

For years, many experts believed that quasicrystals, while interesting, could be made only under the carefully controlled conditions available in a laboratory. Many also thought that the materials were unstable and must, after an extended period of time, revert to ordinary crystals.

Steinhardt, who was skeptical of this view, decided to launch a search to see if perhaps nature had beaten scientists to the punch, and had already produced quasicrystals. In 1999, he and his collaborators  began an intensive search for natural quasicrystals. The team scanned a database of experimental results from more than 80,000 known materials looking for signs of quasicrystalline structure. Next, the researchers started combing museums and private collections for samples containing certain combinations of metals including aluminum, often found in synthetic quasicrystals.

The researchers studied a small sample of the mineral khatyrkite, which is mounted on a pyramid-shaped piece of clay next to a penny to illustrate the small size of the sample. (Image courtesy of Luca Bindi and Paul Steinhardt)

In 2008, the researchers finally uncovered a lead when they were contacted by Luca Bindi, a mineralogist at the Museum of Natural History in Florence, Italy. Bindi suggested that Steinhardt test some of his specimens, including a rare mineral called khatyrkite, which was composed of copper and aluminum. The sample had been stored in a box as part of 10,000 minerals acquired by the museum from a private collector in Amsterdam. The marking on the box indicated that the sample came from the Koryak Mountains, in the northeastern part of Russia's Kamchatka Peninsula.

When the sample arrived from Italy, however, it had been cut away from the surrounding rock, leaving Steinhardt with microscopic grains to work with, and no room for error. "If we had dropped the sample, it would have been lost forever," said Nan Yao, Steinhardt's Princeton colleague. Yao painstakingly ground the tiny sample, which measured the width of a human hair, into the even smaller slivers required for probing the structure to see if it was a quasicrystal. The technique they used, transmission electron microscopy, involves firing a beam of electrons at a sample and observing how the electrons bend, or diffract, when they hit the sample.

Within a sliver of the Russian rock, the researchers found the signature diffraction pattern of a quasicrystal, consisting of aluminum, copper and iron, embedded next to the khatyrkite and other minerals. "I was very excited when I saw the diffraction pattern," said Yao, who had come into work on New Year's Day to do the studies when the lab was quiet. The team — which included Yao, director of the Imaging and Analysis Center at the Princeton Institute for the Science and Technology of Materials, and Peter Lu at Harvard University — published the evidence for the first natural quasicrystal, which today is known as icosahedrite, in a 2009 article in Science.

To uncover the origins of the natural quasicrystal sample, Steinhardt, Bindi and Yao teamed with John Eiler and Yunbin Guan of the California Institute of Technology, Lincoln Hollister from Princeton and Glenn MacPherson of the Smithsonian Institution. The researchers examined numerous possibilities for the material's origin, including the chance that the sample was actually a byproduct of industrial manufacturing that had somehow ended up in the museum's collection. Through a series of investigations, the team uncovered evidence that clearly points to an otherworldly beginning.

One such clue was the presence of a mineral called stishovite, a type of silica that forms only under extremely high pressures and temperatures far from the conditions used in any human activity. Stishovite has been found in meteorites. A key finding was that the quasicrystal was embedded in the stishovite grain, indicating that the quasicrystal and the stishovite formed together through some natural high-pressure process. 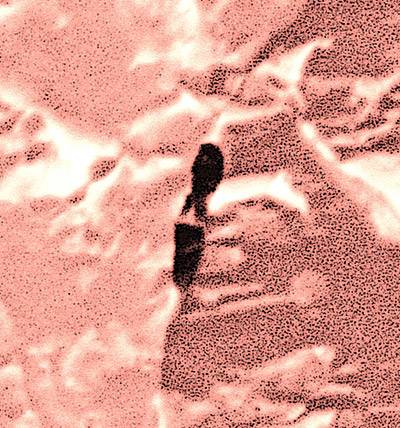 This figure, which resembles an abstract painting, shows two substances.  The pink and white substance is a rare mineral called stishovite, found only in meteorites and meteorite impacts. The dark material in the middle is quasicrystal. Thus, this image provides evidence that the quasicrystal is of extraterrestrial origin. (Image courtesy of Paul Steinhardt)

"We actually found physical contact between the quasicrystal and meteoritic minerals, and that convinced us that we'd found something important," said Hollister, a professor of geosciences emeritus.

Next, the investigators probed the ratios of different versions, or isotopes, of oxygen, which vary depending on whether the minerals formed on Earth or in space. The researchers found that the ratio of oxygen isotopes in pyroxene and olivine, two minerals intergrown among the slivers of quasicrystal, were similar to ones found for some of the oldest-known extraterrestrial meteorites, known as the CV3 carbonaceous chondrites. Other minerals detected in the sample were also consistent with meteoritic origin.

The results came as a surprise, said Hollister, who initially thought the quasicrystal would turn out to be an industrial byproduct given its unusual configuration of copper, iron and aluminum. "In nature it is highly unusual to have metallic aluminum," said Hollister, referring to the fact that in nature aluminum grabs onto oxygen atoms and is always found in the form of aluminum oxide. "We were trying to figure out where on Earth from the core to the surface could we have conditions that would lead to formation of quasicrystals."

Other researchers have been impressed with the results. "I was very surprised when I read that the previously reported icosahedral phase was of extraterrestrial origin," said Robert Downs, professor of geosciences at the University of Arizona, who was not associated with the research. "But a moment later, it was obvious. How else could such an exotic array of elements be formed and preserved?"

Downs described the work as "a great find that crosses all sorts of science boundaries — materials sciences, physics, chemistry, geosciences, astrophysics — all at once." He added, "And for kicks, it provides a snapshot of our solar system before it formed."

In the past year, Steinhardt and Bindi have launched an ambitious quest to trace the origins of the Russian sample, with the goal of confirming its origin and obtaining more quasicrystals. The researchers tracked down the widow of the Amsterdam collector who first sold the mineral to the Italian museum. She showed them a long-hidden diary describing the acquisition of the rock from a government laboratory during the Soviet era. Piecing together this information with a name mentioned in a Russian scientific publication, Steinhardt and Bindi eventually located the Russian mineralogist who in 1979 dug the rock from a thick blue-green layer of clay in a streambed in the Koryak Mountains of Chukotka in far eastern Russia. The adventure culminated in an expedition last summer to that streambed, and the samples gathered during the trip are in the process of being analyzed.

The research, which was published online Jan. 3, was supported by the National Science Foundation Materials Research Science and Engineering Center program through New York University and the Princeton Center for Complex Materials. Support was also provided by NASA.