For insight into what can happen when the Earth's carbon cycle is altered -- a cause and consequence of climate change -- scientists can look to an event that occurred some 720 million years ago.

Pinpointing the causes and effects of the extreme shift in the way carbon moved through the oceans, the biosphere and the atmosphere -- the magnitude of which has not been observed at any other time in Earth history -- is important for understanding just how much Earth's climate can change and how the planet responds to such disturbances.

Publishing their findings in the April 30 issue of the journal Science, the researchers also put forth a hypothesis to explain how changes to Earth's surface wrought by the glaciers of the Neoproterozoic Era could have created the anomaly in carbon cycling.

"The Neoproterozoic Era was the time in Earth history when the amount of oxygen rose to levels that allowed for the evolution of animals, so understanding changes to the carbon cycle and the dynamics of the Earth surface at the time is an important pursuit," said Princeton graduate student Nicholas Swanson-Hysell, the first author on the paper.

A Princeton-led team of geologists analyzed samples of inorganic and organic carbon from the hills of the Trezona Formation in South Australia to document one of the largest perturbations to the carbon cycle in all of Earth history. (Photo: Adam Maloof)Images for news media

The "snowball Earth" theory suggests that the Sturtian glaciation was global in scope, literally encasing the planet in ice, which could have wreaked havoc on the normal functioning of the carbon cycle. While the theory is controversial and the extent of the deep freeze is under investigation, research team member Adam Maloof co-wrote a March 2010 Science paper demonstrating that glaciers reached the equator some 716.5 million years ago, providing further evidence to support the existence of a Cryogenian "snowball Earth."

In the latest research, Swanson-Hysell, Maloof and their collaborators collected samples of limestone from Central and South Australia dating back to the Tonian and Cryogenian periods. Using a technique known as isotope analysis to learn how the carbon cycle worked in ancient times, the team pieced together clues that are hidden in the atomic composition of the carbon found in inorganic limestone sediment and ancient organic material. In addition, the geologists recorded where the samples were found in the rock layers to determine crucial information about the relative age of the samples and the environmental conditions under which they formed. 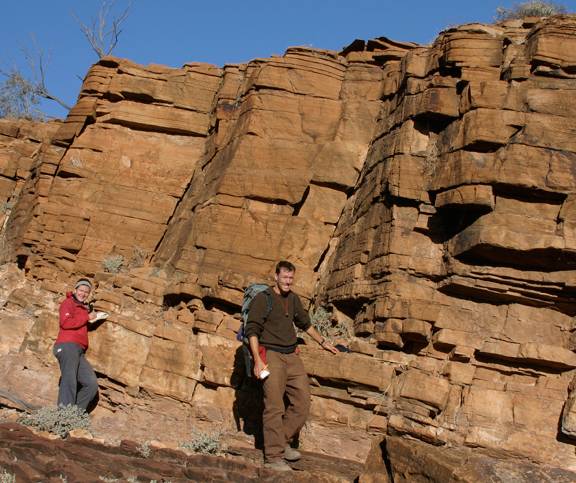 Princeton graduate students Catherine Rose and Nicholas Swanson-Hysell stand at the boundary of the Cryogenian and Ediacaran periods, distinguishable by the different colors of the glacial rocks below and the carbonate rock above. (Photo: Adam Maloof)

Their results documented a peculiar and large shift in the carbon cycle based on analyses of samples obtained from tropical limestone sediments known as the Trezona Formation, which dates to the end of the Cryogenian period approximately 650 million years ago and was deposited between "snowball Earth" events.

"The disturbance we're seeing in the Neoproterozoic carbon cycle is larger by several orders of magnitude than anything we could cause today, even if we were to burn all the fossil fuels on the planet at once," said Maloof, an assistant professor of geosciences at Princeton.

Previous data from the Ediacaran period at the end of the Neoproterozoic era have shown a similar perturbation to the carbon cycle, and in 2003 Massachusetts Institute of Technology geophysicist Daniel Rothman suggested that a buildup of a huge pool of organic carbon in the ocean could have led to the observed disturbance.

The perturbation studied by the Princeton researchers shows this same behavior during an event that was roughly 25 percent larger and 100 million years older than the previously recognized disturbance. The team also documented that the carbon cycle was not operating in this bizarre fashion 800 million years ago prior to the first Neoproterozoic glaciations, constraining in time the onset of such behavior and linking it to the proposed "snowball Earth" event. 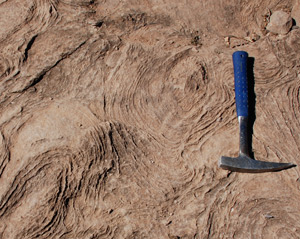 These layered structures called stromatolites from the Cryogenian Trezona Formation were created by biofilms of microbes that formed in a shallow-water tropical environment in South Australia's Adelaide Rift Complex about 650 million years ago. (Photo: Nicholas Swanson-Hysell)

Building on Rothman's framework, the Princeton-led geologists set out to explain how an ice-covered globe in the early Cryogenian period could have prompted the accumulation of massive amounts of organic carbon in the ocean, leading to the observed disturbance to the carbon cycle later in the period.

According to their proposed hypothesis, the passage of the Sturtian glaciers across continental surfaces would have removed the weathered material and debris, which had accumulated in the 1.5 billion years since the preceding ice age. When the glaciers receded, this would have exposed vast amounts of bedrock to the carbon dioxide in the atmosphere for weathering, freeing up nutrients in the rock for delivery into the oceans.

This process would have generated a relatively large influx of iron into the oceans, which could have interrupted biomechanisms used by marine bacteria during the Tonian to process, or eat, the organic carbon in the water and convert it into carbon dioxide and other dissolved inorganic carbon compounds. If the organic carbon was not eaten by bacteria, it would have accumulated into a massive oceanic reservoir and resulted in the strange carbon cycle of the Cryogenian and early Ediacaran.

The interaction of carbon dioxide with the continental surfaces during the weathering process also would have removed some of the carbon dioxide from the atmosphere, lowering the global temperatures and creating conditions conducive to the series of glacial events that were observed throughout the Cryogenian.

According to Rothman's hypothesis, over millions of years the levels of oceanic and atmospheric oxygen would have grown as a consequence of the altered carbon cycle, ultimately leading to the oxidation of the large reservoir of organic carbon, removing the extra organic carbon from the oceans and returning the carbon cycle to a steady state more similar to how it functions today. Increased levels of oxygen in the atmosphere also would have provided the conditions that were necessary for the explosive diversification of animal life at the end of the Neoproterozoic and into the Cambrian Period.

In field work this summer, the Princeton team will continue to investigate the disturbances to the Cryogenian and Ediacaran carbon cycles, and conduct research on the Tonian-Cryogenian-Ediacaran geologic, isotopic and paleogeographic history of northern Ethiopia and southern Australia. The geologists will explore some of the many questions that remain, such as what enabled the Cryogenian growth of ice sheets after a 1.5 billion year hiatus.

In addition to Swanson-Hysell and Maloof, the Princeton researchers on the team were graduate student Catherine Rose and former postdoctoral fellow Claire Calmet. The team also included Galen Halverson of the University of Adelaide, now at McGill University, and Matthew Hurtgen of Northwestern University.