Below left: This graphic shows the tilting of the Earth that might occur if a dramatic imbalance in the planet’s mass distribution ever developed in the Arctic. According to the theory of true polar wander, a heavy spot in the Arctic -- caused by a very large upwelling of magma, for instance -- would reorient the planet over 5 to 20 million years so that the heavy spot would lie at the equator, changing the orientation of the Earth in relation to its poles. New evidence uncovered by the team of Princeton geoscientist Adam Maloof shows that this sort of reorientation may have occurred in the planet’s distant past.

Imagine a shift in the Earth so profound that it could force our entire planet to spin on its side after a few million years, tilting it so far that Alaska would sit at the equator. Princeton scientists have now provided the first compelling evidence that this kind of major shift may have happened in our world's distant past.

By analyzing the magnetic composition of ancient sediments found in the remote Norwegian archipelago of Svalbard, Princeton University's Adam Maloof has lent credence to a 140-year-old theory regarding the way the Earth might restore its own balance if an unequal distribution of weight ever developed in its interior or on its surface.

The theory, known as true polar wander, postulates that if an object of sufficient weight -- such as a supersized volcano -- ever formed far from the equator, the force of the planet's rotation would gradually pull the heavy object away from the axis the Earth spins around. If the volcanoes, land and other masses that exist within the spinning Earth ever became sufficiently imbalanced, the planet would tilt and rotate itself until this extra weight was relocated to a point along the equator.

"The sediments we have recovered from Norway offer the first good evidence that a true polar wander event happened about 800 million years ago," said Maloof, an assistant professor of geosciences. "If we can find good corroborating evidence from other parts of the world as well, we will have a very good idea that our planet is capable of this sort of dramatic change." 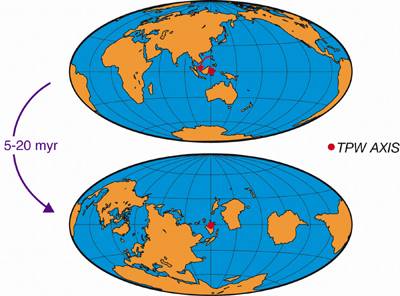 True polar wander is different from the more familiar idea of "continental drift," which is the inchwise movement of individual continents relative to one another across the Earth's surface. Polar wander can tip the entire planet on its side at a rate of perhaps several meters per year, about 10 to 100 times as fast as the continents drift due to plate tectonics. Though the poles themselves would still point in the same direction with respect to the solar system, the process could conceivably shift entire continents from the tropics to the Arctic, or vice versa, within a relatively brief geological time span.

While the idea that the continents are slowly moving in relation to one another is a well-known concept, the less familiar theory of true polar wander has been around since the mid-19th century, several decades before continental drift was ever proposed. But when the continents were proven to be moving under the influence of plate tectonics in the 1960s, it explained so many dynamic processes in the Earth's surface so well that true polar wander became an obscure subject.

"Planetary scientists still talk about polar wander for other worlds, such as Mars, where a massive buildup of volcanic rock called Tharsis sits at the Martian equator," Maloof said. "But because Earth's surface is constantly changing as the continents move and ocean crustal plates slide over and under one another, it's more difficult to find evidence of our planet twisting hundreds of millions of years ago, as Mars likely did while it was still geologically active."

However, the sediments that the team studied in Svalbard from 1999 to 2005 may have provided just such long-sought evidence. It is well known that when rock particles are sinking to the ocean floor to form layers of new sediment, tiny magnetic grains within the particles align themselves with the magnetic lines of the Earth. Once this rock hardens, it becomes a reliable record of the direction the Earth's magnetic field was pointing at the time of the rock's formation. So, if a rock has been spun around by a dramatic geological event, its magnetic field will have an apparently anomalous orientation that geophysicists like those on Maloof's team seek to explain.

"We found just such anomalies in the Svalbard sediments," Maloof said. "We made every effort to find another reason for the anomalies, such as a rapid rotation of the individual crustal plate the islands rest upon, but none of the alternatives makes as much sense as a true polar wander event when taken in the context of geochemical and sea level data from the same rocks."

The findings, he said, could possibly explain odd changes in ocean chemistry that occurred about 800 million years ago. Other similar changes in the ocean have cropped up in ancient times, Maloof said, but at these other times scientists know that an ice age was to blame.

"Scientists have found no evidence for an ice age occurring 800 million years ago, and the change in the ocean at this juncture remains one of the great mysteries in the ancient history of our planet," he said. "But if all the continents were suddenly flipped around and their rivers began carrying water and nutrients into the tropics instead of the Arctic, for example, it could produce the mysterious geochemical changes science has been trying to explain."

Because the team obtained all its data from the islands of Svalbard, Maloof said their next priority would be to seek corroborating evidence within sediments of similar age from elsewhere on the planet. This is difficult, Maloof said, because most 800-million-year-old rocks have long since disappeared. Because the Earth's crustal plates slide under one another over time, they take most of geological history back into the planet's deep interior. However, Maloof said, a site his team has located in Australia looks promising.

"We cannot be certain of these findings until we find similar patterns in rock chemistry and magnetics on other continents," Maloof said. "Rocks of the same age are preserved in the Australian interior, so we'll be visiting the site over the next two years to look for additional evidence. If we find some, we'll be far more confident about this theory's validity."

Maloof said that true polar wander was most likely to occur when the Earth's landmasses were fused together to form a single supercontinent, something that has happened at least twice in the distant past. But he said we should not worry about the planet going through a major shift again any time soon.

"If a true polar wander event has occurred in our planet's history, it's likely been when the continents formed a single mass on one side of the Earth," he said. "We don't expect there to be another event in the foreseeable future, though. The Earth's surface is pretty well balanced today."

Maloof's research was sponsored in part by the National Science Foundation. The five-year field work in Svalbard was led by Maloof and Harvard University's Galen Halverson.

We present new paleomagnetic data from three Middle Neoproterozoic carbonate units of East Svalbard, Norway. The paleomagnetic record is gleaned from 50 to 650 m of continuous, platformal carbonate sediment, is reproduced at three locations distributed over >100 km on a single craton, and scores a 5–6 (out of 7) on the Van der Voo (1990) reliability scale. Two >50° shifts in paleomagnetic direction are coincident with equally abrupt shifts in delta-Carbon 13 and transient changes in relative sea level. We explore four possible explanations for these coincidental changes: rapid plate tectonic rotation during depositional hiatus, magnetic excursions, nongeocentric axial-dipole fields, and true polar wander. We conclude that the observations are explained most readily by rapid shifts in paleogeography associated with a pair of true polar wander events. Future work in sediments of equivalent age from other basins can test directly the true polar wander hypothesis because this type of event would affect every continent in a predictable manner, depending on the continent’s changing position relative to Earth’s spin axis.