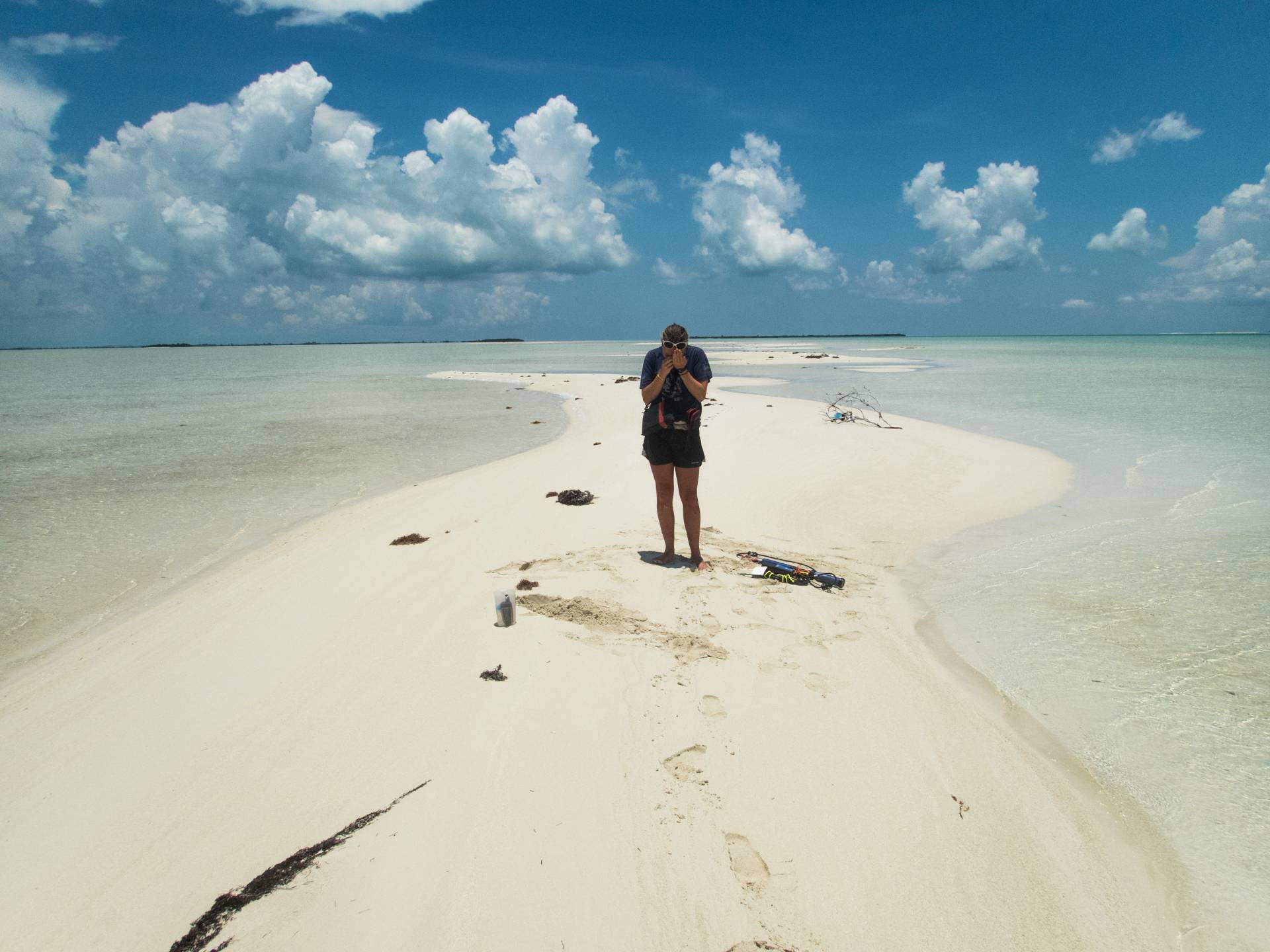 Emily Geyman, who graduated from Princeton in 2019 with a bachelor’s degree in geosciences, is the lead author of a scientific paper that stems from her senior thesis research on how carbonates record the global carbon cycle. Shown, Geyman on the sand shoals of Andros Island in the Bahamas, where she studied ooids, small sedimentary grains composed of calcium carbonate. These very small particles form on the sea floor of shallow, tropical seas and provide clues to past climatic conditions.

When scientists want to study Earth’s very ancient geological past — typically greater than 100 million years ago — they often turn to rocks called carbonates.

Calcium carbonates, the most ubiquitous forms of carbonate, are minerals that precipitate from seawater and form layered sedimentary deposits on the seafloor. They are commonly known as limestone. More than 3.5 billion years of Earth’s history are chronicled in carbonate rocks. Many scientists use them to reconstruct histories of changes in climate and the past global carbon cycle — that is, the process through which carbon travels between the oceans, the atmosphere, the biosphere and solid rock.

“You can learn a lot from carbonates,” said Emily Geyman, a 2019 Princeton graduate in geosciences and the lead author of a paper published Nov. 8 in the Proceedings of the National Academy of Sciences (PNAS). The paper was the result of Geyman’s senior thesis research in which she investigated the chemical composition of carbonates and how these carbonates record the carbon cycle.

Geyman’s research was predominantly funded by the PEI Environmental Scholars Program, which was established with a gift from Elizabeth A. Smith and Ray E. Newton III ’86. She initially received the 2017 award, and had an extension in 2018. 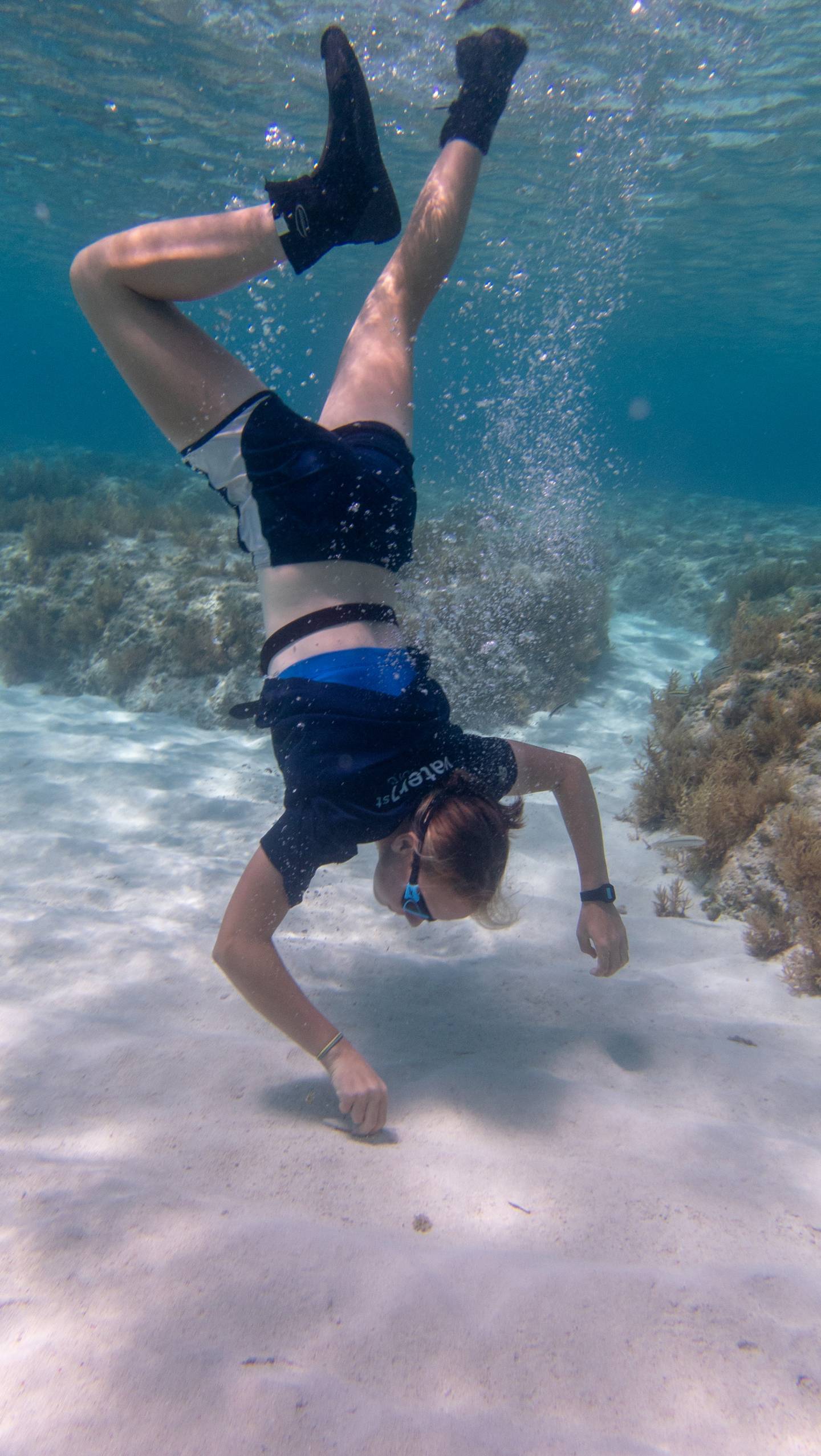 Geyman dives for a sediment sample in the Bahamas. Analyzing the samples helps reconstruct the complex chemistry of the Earth’s past.

“The thing that makes carbonates especially useful as opposed to something like a sandstone,” Geyman said, “is that the carbonate is precipitated directly from the sea water, so the idea is that the chemistry of the carbonates, which we can measure, will tell us something about the ancient ocean.”

But not all carbonates get preserved in the geologic record. Deep sea carbonates, for example, typically get subducted, which is why scientists often turn to carbonates that accumulate on shallow continental shelves. The problem, however, is that scientists still don’t know enough about how properties such as ocean chemistry, ocean temperature, wave energy and water depth get translated into the shallow carbonate record.

Now, however, researchers at Princeton are working to address this question.

“No one had actually looked at the equivalent of these ancient limestones that are forming today and understood the translation,” said Adam Maloof, a professor of geosciences who collaborated on the paper with Geyman. “It’s like trying to translate old texts without a Rosetta Stone. We needed our Rosetta Stone.”

Not only did the researchers find their Rosetta Stone in the form of an innovative hypothesis, but their findings challenge the conventional logic about using carbonates to reconstruct past global carbon cycles.

Studying ancient isotopes — different forms of the same element — is a key to understanding how much and why Earth’s global carbon cycle has changed in the past. This is crucial because the carbon cycle acts as a thermostat to regulate Earth’s temperature, Maloof said. Understanding how this thermostat works will help us predict future climate change.

Their research took them to Andros Island in the Bahamas, a large and almost entirely uninhabited island situated on the Great Bahama Bank.

The Bahamas are a great place to study the Earth’s ancient geological past. “During much of Earth’s history,” Geyman said, “a lot of the Earth’s surface looked like the Bahamas today.”

“If you want to figure out what past sea level and sea water chemistry was like by looking at ancient carbonates,” Geyman said, “you have to go to the modern analog and ask ‘well, how do modern carbonates form right now according to current ocean chemistry and current sea level?’”

What they found, and what previous studies have demonstrated, was that something strange was going on in Bahamian sediment. The limestone forming there had carbon–13 that seemed much too high compared to single-celled plankton that were floating all around the open ocean.

A large percentage of ancient carbonates also demonstrate this anomalously high carbon-13. If you assume this reflects global ocean conditions, Maloof pointed out, “You are stuck making drastic inferences about large changes in the carbon cycle.”

Instead, Geyman and Maloof devised a hypothesis they call the “diurnal carbon cycle engine.” As the name implies, the process involves a 24-hour cycle. When the sun shines during the day, aquatic plants draw carbon–12 from the water through the process of photosynthesis and use it to make plant material. Because the plants preferentially take carbon–12, the remaining carbon in the water becomes enriched with carbon–13.

The essential component in this process is that limestone forms fastest during the peak of the day when photosynthesis is happening because photosynthesis makes the water more saturated with calcium carbonate. At night photosynthesis gives way to aerobic respiration and the carbon sequestered in the plants’ tissue is returned to the water. But limestone formation “has almost no record” of the nighttime, Maloof said, because there’s very little precipitation. If precipitation occurred equally during the night, the average level of carbon-13 would be normal because carbon-12 would be introduced back to the system.

This process, the researchers assert, can only happen when the water is sufficiently shallow and protected on continental shelves and platforms like the Bahamas. The same diurnal process occurs in the open ocean, but the movement of the waves constantly mixes and brings in new water so that carbon-13 is never elevated to such extremes.

The particular way Bahamian sediments absorb calcium carbonates from seawater complicates the picture of using ancient limestones to record a global carbon cycle. It can’t be assumed that there was a single, uniform process of carbon cycling that characterized the past, Maloof said.

“We’re using a modern analog to study the past,” Geyman added, “and the past is the key in many ways to understanding the future.”

Geyman currently is pursuing a master’s with a focus on glaciology at the University of Tromsø in Arctic Norway as part of a Sachs Global Fellowship from Princeton.

She conducted her Bahamas work as part of her junior and senior independent work at Princeton. An accomplished young scientist, she has already been the recipient of numerous awards and accolades. She received the Peter W. Stroh ’51 Environmental Senior Thesis Prize, the Calvin Dodd MacCracken Award from Princeton’s School of Engineering and Applied Science and the Edward Sampson 1914 Award for distinguished work in environmental geoscience.

Maloof has high praise for Geyman. “She can do anything,” he said. “Most of the time the really good observers do field work … they’re not at the same time computer scientists who can make amazing analyses. And she is both.”

The paper, “A diurnal carbon engine explains 13C-enriched carbonates without increasing the global production of oxygen,” by Emily Geyman and Adam Maloof, was published online Nov. 8 in the Proceedings of the National Academy of Sciences  www.pnas.org/lookup/suppl/doi:10.1073/pnas.1908783116/-/DCSupplemental. This work was supported by NSF EAR 1410317, and by the Princeton Environmental Institute at Princeton University through the Smith-Newton Scholars Program. The GSA Stephen G. Pollock Student Research Grant, the Evolving Earth Foundation, the High Meadows Foundation, the Sigma Xi Research Society and the Princeton Geosciences Student Research Fund provided additional support.