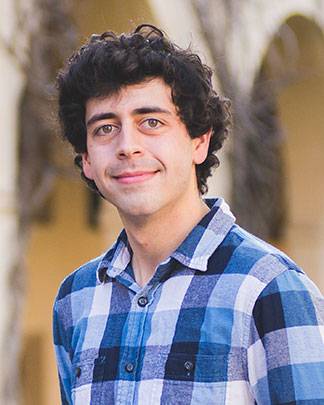 Preston Cosslett Kemeny, a 2015 Princeton graduate, is one of 12 college seniors and first-year graduate students nationwide to be named 2017 Hertz Fellows by the Fannie and John Hertz Foundation. The fellows, who were selected from more than 700 applicants, will receive a stipend and full tuition support valued at more than $250,000 for up to five years of graduate study in the applied physical and biological sciences, mathematics and engineering.

Kemeny, who majored in geosciences and earned certificates in environmental studies and planets and life, is a graduate student in geochemistry in the Division of Geological and Planetary Sciences at the California Institute of Technology.

Kemeny plans to use the fellowship to continue researching the coevolution of life and climate throughout Earth's history. His work has a particular focus on reconstructing ancient environmental cycles, which will improve predictions in climate models and help combat the detrimental impacts of modern carbon emissions.

"The history of Earth's climate is intricately intertwined with the development of life, and interactions between geologic processes and the planet's biosphere are recorded in the stable isotope ratios of natural materials," Kemeny said. "I aspire to use isotope ratios to read Earth's biography, a story in equal parts elegant and confounding, but always utterly engaging."

Since graduating, Kemeny has explored his interests in unforgettable ways.

In July 2015, he participated in an oceanographic cruise aboard the South African icebreaker S.A. Agulhas II, traveling from Cape Town to the ice edge of Antarctica, serving as part of a team to sample seawater for nitrate and iron isotope analyses.

Then, Kemeny joined a team of scientists led by John Higgins, assistant professor of geosciences at Princeton, in Antarctica for seven weeks, searching for the world's oldest ice. "Antarctica has a lot to teach us about ancient climate and the origin of life," Kemeny said. "I am grateful for the opportunity to have visited such a pristine environment and to be part of the search for older climate records."

After that expedition, Kemeny left Princeton for a summer of backpacking in Peru, Japan and Thailand before going to Iceland last August to conduct fieldwork with a team from Caltech and start his graduate studies.

As an undergraduate, Kemeny leapt at the chance to travel. In his junior year, he went to India with Princeton geoscientists Professor Gerta Keller and Associate Professor Blair Schoene, to conduct research on the rate of volcanic eruptions during the Cretaceous-Tertiary mass extinction.

In the summer of 2011, he also sampled rainwater for isotopic analysis at the Mpala Research Centre in Kenya as part of an ecohydrology lab led by Kelly Caylor, now a professor at the University of California-Santa Barbara. "My research collecting rain required going outside in the middle of storms every few minutes, which meant I was nearly continuously saturated for a few hours most afternoons," Kemeny said.

As a freshman, he took his first geosciences course, led by associate professors Frederik Simons and Adam Maloof, which took Kemeny to Cyprus where he learned to use a magnetometer, among other skills of fieldwork.

"The Department of Geosciences was instrumental in shaping my academic experience at Princeton and growth as a scholar," Kemeny said.

He emphasizes the close working relationships Princeton undergraduates have with faculty, such as with his senior thesis adviser, Daniel Sigman, the Dusenbury Professor of Geological and Geophysical Sciences, who taught him how to measure and interpret nitrogen isotope ratios.

"Preston is a brilliant, creative intellect, a bundle of optimistic energy, and just an incredibly impressive person," Sigman said. "I don't want to make too bold of a claim regarding the origins of Preston's extraordinary potential and early successes. Still, I think Preston would agree that he has benefited from Princeton's unique level of support for undergraduate research, including research that puts the student shoulder to shoulder with faculty, postdocs, graduate students and research staff who are actively pursuing the frontiers of knowledge. Looking forward, I basically assume that Preston will drive major progress in our understanding of the Earth and the global environment."

"Danny remains an adviser and friend, and we are currently collaborating on a project using nitrogen isotope ratios to model glacial nutrient dynamics," Kemeny said.

At graduation, Kemeny received the Edward Sampson, Class of 1914, Prize in Environmental Geosciences for his thesis research, and was a 2016 recipient of the National Defense Science and Engineering Graduate Fellowship.

At Princeton, Kemeny performed improvisational comedy with Lobster Club, a no-audition performance group he co-founded as a freshman, in addition to serving for two years as a leader in Outdoor Action. Kemeny was a peer academic adviser in Wilson College.