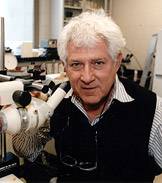 Princeton University professor emeritus Malcolm Steinberg, a molecular biologist well known for his influential hypothesis about how cells in an embryo assemble, died Feb. 7 at his home in Princeton of complications from lung cancer. He was 81.

Described as a personable colleague who loved discussing science and ideas, Steinberg joined Princeton's faculty in 1966. A few years prior, he had introduced his differential adhesion hypothesis, an idea he continued to explore with numerous collaborators for much of his career. According to Steinberg's theory, certain tissues behave like liquids over long timescales with a characteristic surface tension that determines the spatial configuration of interacting tissues and contributes to their arrangement during embryo development.

Princeton Professor of Molecular Biology Edward Cox said that his first scientific discussion with a Princeton colleague after joining the University in 1967 was with Steinberg about the differential adhesion hypothesis.

"I thought then and I think now that it was a marvelous insight into embryology and animal development," said Cox, who studies gene regulation and cell signaling. At the time, Cox said, embryonic development was poorly understood and considered an almost unexplainable phenomenon.

"For the first time, the complicated sorting out of cells in the embryo could be explained by thermodynamics," Cox said. "There was no magic to it, just the simple physics of cells sticking to each other. That conversation with Mal was the first time I thought that biologists could come up with a principle of embryology that was universal and might have great explanatory power. Now, all developmental biologists are familiar with his ideas."

Steinberg's seminal work combined elements of biology and physics in a way that was emblematic of his embrace and understanding of other disciplines outside of biology, Cox said. It was not uncommon for scientists of that era to stay within their field, he said, but Steinberg often worked with concepts and researchers outside of biology.

Steinberg co-wrote more than 150 research papers, many of which investigated the role of cell adhesion in a variety of areas such as the development of cancer. He continued publishing after his retirement from Princeton in 2005.

"When he realized he had this great idea, he began reporting it and discussing it at interdisciplinary conferences, and I think his ideas attracted other kinds of scientists to him," Cox said.

Steinberg's work earned him professional distinction as well. He had a long career with the renowned Marine Biological Laboratory in Woods Hole, Mass., serving as director of its embryology course and as a lab trustee from 1969 to 1977. He was elected a fellow of the American Association for the Advancement of Science in 1975 — the same year he was named Princeton's Henry Fairfield Osborn Professor of Biology — and was appointed to the U.S. National Academy of Sciences' biology board from 1986 through 1992. At the University, he also served as the then-Department of Biology's graduate studies director from 1969 to 1972.

When he was on campus, Steinberg enjoyed taking time to discuss ideas with his colleagues, going over lab techniques and general approaches, said Cox, who served as chair of the Department of Molecular Biology from 1977 to 1987.

"He liked to talk about ideas and was a good scientific colleague," Cox said. "Mal was very good in the lab, a classic experimentalist."

Eva-Maria Schoetz, a Lewis-Sigler Fellow in Princeton's Lewis-Sigler Institute for Integrative Genomics and a lecturer in physics, is one of the many young scientists in biology who knew Steinberg's work long before she actually met him, she said.

As a student at the University of Konstanz in Germany, Schoetz, who is a physicist, worked on her diploma thesis at Princeton in 2003 and 2004. After she returned to Germany, she studied the development of zebrafish embryos and became curious about the role of cell adhesion and surface tension. She recalled a conversation at Princeton about Steinberg's work and contacted him in 2006.

"He was not somebody who simply worked in that field — he was the one who started asking those questions in the first place," she said. "Anyone working in this topic has or will come across his work in many different contexts. Even if they never met him, he's an influence."

Schoetz admits that she was nervous reaching out to such a well-known scientist, but her intimidation dispelled once she met him. They eventually were co-authors on papers in 2008 and 2010, both related to tissue surface tension, Schoetz said.

"He was father-like — very warm, inspirational and genuine," she said. "When I contacted him, he was retired, but he was very excited to work together. One of things about Mal was that he really loved science. Even though I'm a physicist, he respected my way of thinking and different approach.

Steinberg's wife, Marjorie, said that her husband amassed a multitude of students and friends over the decades who likewise saw him as a mentor, influence and colleague. The devotion he had for his research and students stemmed from his love for his work, said Marjorie Steinberg, who worked as administrative assistant to the director of health education at Princeton's McCosh Health Center from 1989 to 2000.

"He was a scientist at heart," she said. "When he was still working he was very involved in his work. It was his life and he talked about it a great deal. He had such a great interest and it affected everyone around him."

Before coming to Princeton, Steinberg served as a faculty member at Johns Hopkins University from 1958 to 1966. He received a bachelor's degree from Amherst College and a Ph.D. from the University of Minnesota.

In addition to his wife, Steinberg is survived by his four children, Jeff, Julie, Ellie and Jay. In lieu of flowers, memorial contributions can be sent to the Marine Biological Laboratory, 7 MBL St., Woods Hole, MA 02543.