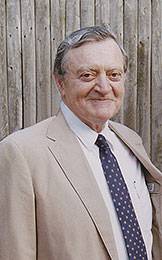 Princeton University professor emeritus Charles Gilvarg, remembered as a tireless scientist and a demanding but motivational professor, died Jan. 6 in Scottsdale, Ariz., following a stroke. He was 87.

During his 34 years at the University, Gilvarg, who in 1998 was named professor of molecular biology, emeritus, and senior scientist, established himself as a preeminent researcher in the field of cellular metabolism. He published 131 papers — the latest in 2011 — and mentored many undergraduate and graduate students. He also saw Princeton's Program in Biochemical Sciences through its evolution to a department and served as the first chair of the Department of Biochemical Science (which became the Department of Molecular Biology in 1990) from 1970 to 1973.

Longtime friend and colleague Jacques Fresco, the Damon B. Pfeiffer Professor in the Life Sciences at Princeton, said that Gilvarg was a "major figure" in intermediary metabolism, the chemical processes through which cells produce energy, the building blocks of proteins and other essential components. Gilvarg's work related specifically to amino-acid biosynthesis and transport, and was important to a biochemical-research renaissance during the 1960s and '70s.

"He was brilliant, an outstanding researcher," said Fresco, who met Gilvarg in the 1950s when both were postdoctoral researchers in New York City. "He was exceedingly bright, a very fast thinker and he could immediately see the essence of a research area."

Fresco helped lure Gilvarg from the New York University School of Medicine to Princeton in 1964, the year after Gilvarg received the American Chemical Society's Paul Lewis Award for outstanding researchers under 40. At Princeton, Gilvarg and Fresco shared an office suite for decades. Although they focused on different areas of biochemistry, Gilvarg could comfortably discuss and evaluate other disciplines and scientists.

"He was unusually able to assess the capabilities of others. It came in handy as we were expanding the young department and adding new faculty," Fresco said. "He really was considered a very clear lecturer and thinker, and what people will most remember was his exceptionally quick mind and his remarkable ability to assess new information with great clarity and vision."

Gilvarg also was known as a thorough and hard-working researcher who expected just as much from his students.

Elaine Fuchs, who studied under Gilvarg from 1972 until 1977 when she received her Ph.D. in biochemical sciences, said that his expectations shaped her own scientific rigor. Fuchs, the Rebecca C. Lancefield Professor in Molecular Genetics and Cell Biology at Rockefeller University in New York, studies mammalian skin diseases and her work has been instrumental to the development of modern dermatology.

"At first glance, his high standards seemed unachievable," Fuchs said. "However, as the years in his lab went by, I began to strive harder to meet them. I became increasingly passionate about designing well-controlled experiments to test interesting and important questions.

"I credit much of what success I have achieved in my own scientific career to Charlie's patience and superb teaching skills, and to his love for science," Fuchs said. "He will be dearly remembered by all of us who so greatly benefited from his many talents."

Gilvarg's wife, Frieda, said that her husband enjoyed learning about other scientific fields and that his reputation for thoroughness extended to even casual conversation.

Charles Gilvarg's scientific career began with a chemistry set he received from a landlady when he was 8 and continued into last year, Frieda said. At the time of his death, Gilvarg was working on a biological indicator of early-stage pancreatic cancer and was awaiting efficacy results from biological samples. He had demonstrated the biomarker's potential in a 2011 paper in the journal Cancer Biomarkers.

"Science was his absolute focus. His life revolved around his work and everything except his family was secondary," Frieda said. "I was resigned to the fact that he would never be totally retired, even though he pretended to be. He was going to keep working until he died, which he did. One of the parts of his death that is hardest for me to take is that he was so close [to seeing the biomarker project through]."

During his career, Gilvarg worked alongside some of the most prominent people in his field, including his doctoral thesis adviser and 1964 Nobel Laureate Konrad Bloch, who once quipped that Gilvarg was the only student whose questions he dreaded, Fresco said. After receiving his bachelor's degree in chemical engineering from the Cooper Union in 1948, Gilvarg worked under Bloch at the University of Chicago before receiving his Ph.D. in 1951. After honing his interest in amino-acid biosynthesis as a postdoctoral researcher with noted microbiologist Bernard Davis, Gilvarg in 1954 joined the faculty of the NYU biochemistry department chaired by 1959 Nobel Laureate Severo Ochoa.

In addition to his wife, Gilvarg is survived by his four children — Karyn, David, Martin and Gail — as well as his eight grandchildren: Amos, Ian, Alexander, Megan, Charles, Thomas, Katherine and Patrick.

In lieu of flowers, memorial contributions may be made to the Cooper Union Office of Alumni Affairs and Development, Attn: Brooke Bryant, 30 Cooper Square, 8th Floor, New York, N.Y., 10003. A memorial service in Princeton is planned for later this year.