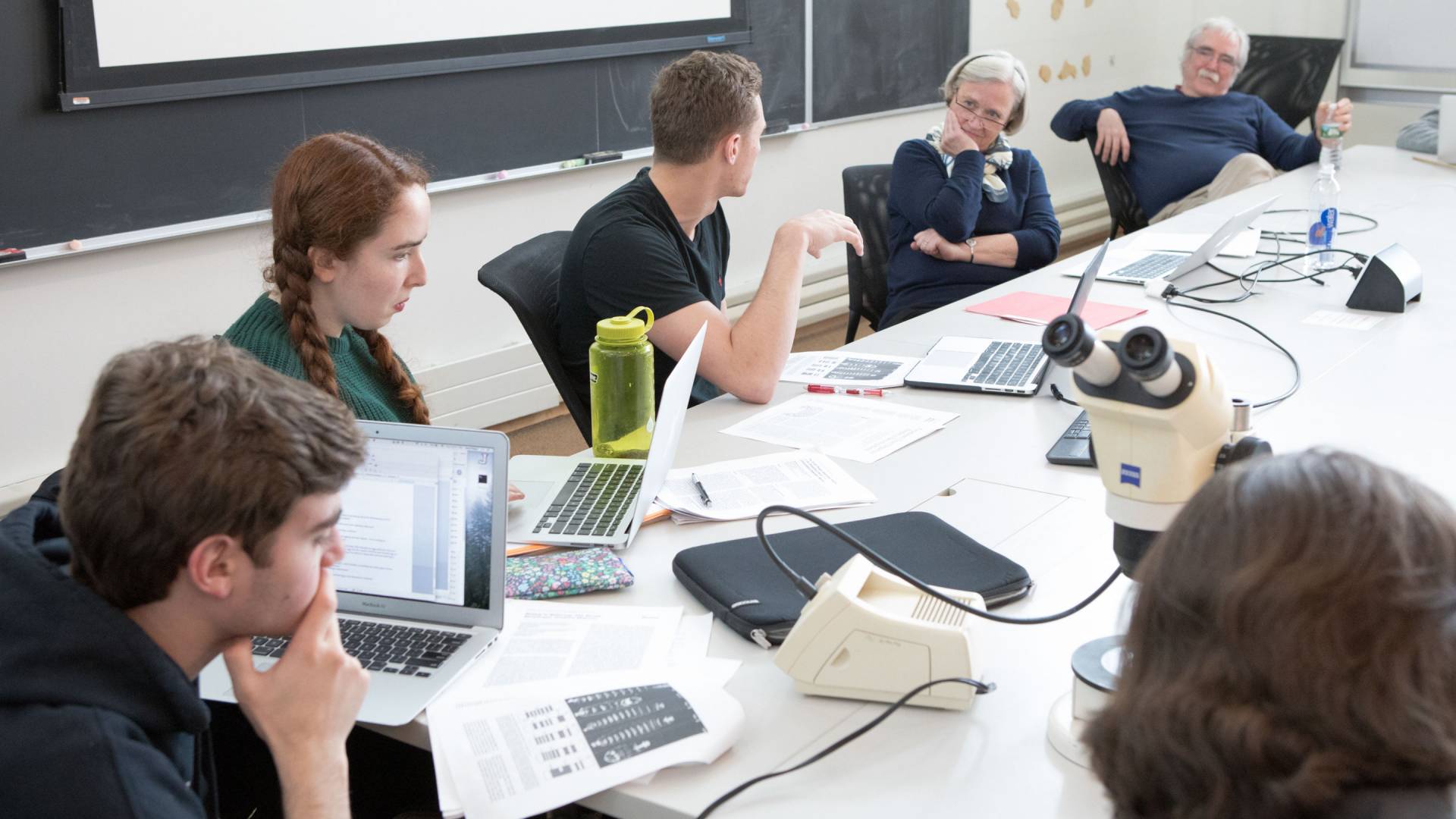 In the Princeton University freshman seminar "What Makes a Great Experiment?" taught by Shirley M. Tilghman (second from upper right), president of the University, emeritus, and a professor of molecular biology and public affairs, first-year students examine creatively and thoughtfully designed studies to understand how scientific discovery happens. Tilghman invites accomplished scientists such as Eric Wieschaus (upper right), Princeton's Squibb Professor in Molecular Biology and a 1995 Nobel laureate in physiology and medicine, to discuss their work with the class.

The experimental work that Shirley M. Tilghman is most known for — cloning the first mammalian gene — is not the one she considers her most elegant. That honor goes to a 1999 paper in the journal Nature about neural development in mice.

"It was incredibly hard and beautifully designed," Tilghman, president of the University, emeritus, and a professor of molecular biology and public affairs, explained in class to Princeton University first-year student E Jeremijenko-Conley. "I loved designing a great experiment, sometimes more than actually doing the experiment. I loved the elegance."

Tilghman brings that affinity to the new freshman seminar she is teaching this semester, "What Makes a Great Experiment?" Each week, first-year students in this Richard L. Smith '70 Freshman Seminar examine studies Tilghman has selected for being thoughtfully and creatively designed and written for publication. She invites accomplished scientists such as Eric Wieschaus, Princeton's Squibb Professor in Molecular Biology and a 1995 Nobel laureate in physiology and medicine, to discuss their work with the class.

"We focus on the design of the experiments — the choices that scientists make in order to answer a fundamental question," Tilghman said.

"My goal with the class is to explore with students — not all of whom are likely to be science concentrators — how scientific discovery happens," she said. "Too often, science classes become a series of facts to be memorized without any understanding of how that knowledge has been generated. I am also trying to impart a sense of the aesthetic beauty of conducting good science — how beautiful a great experiment can be." 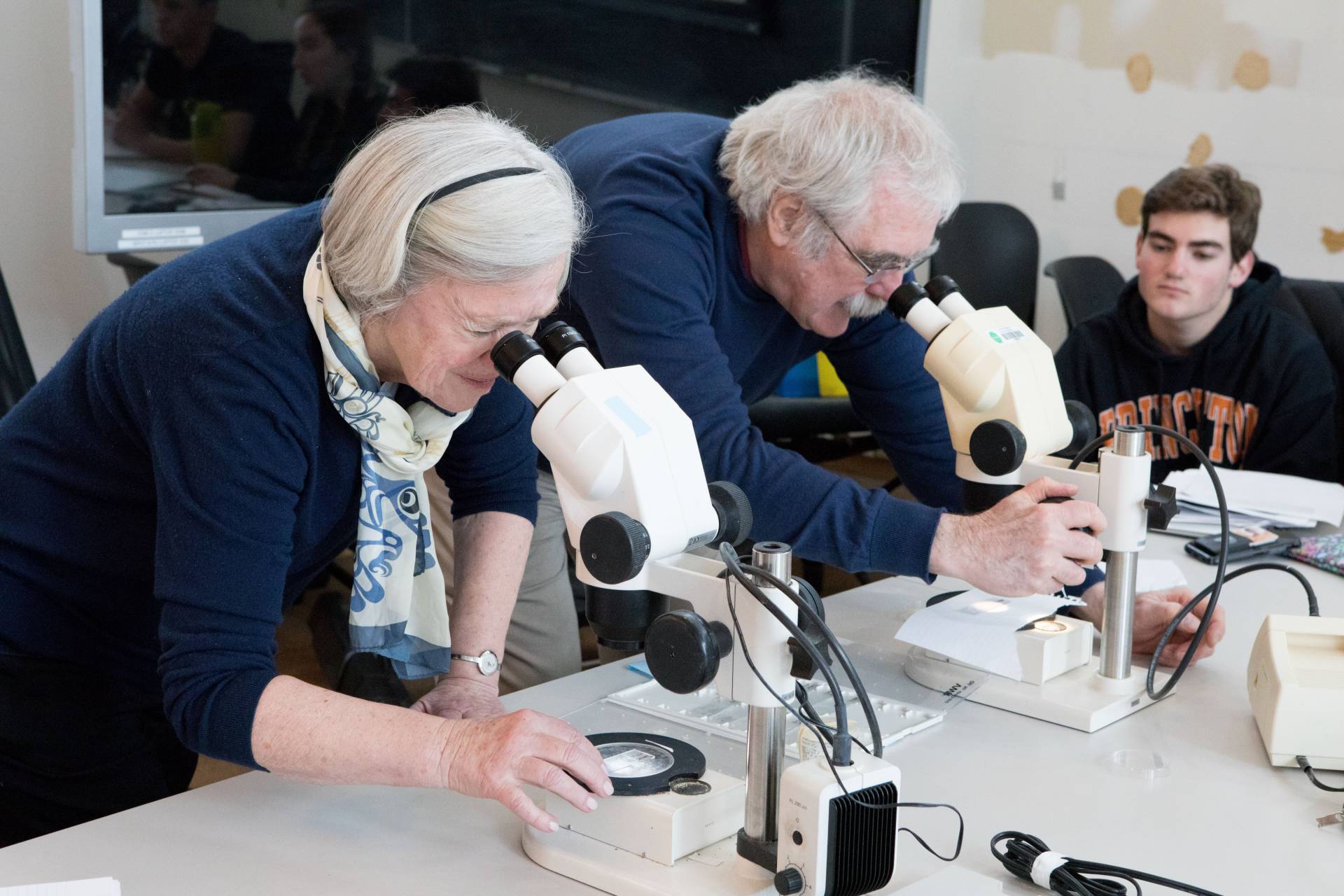 The class provides first-year students such as David Major (right) with direct exposure to scientists and research in the experimental sciences they may not have experienced. Major said he particularly enjoyed reading the seminal 1993 paper of Princeton evolutionary biologists Rosemary and Peter Grant, who spoke to the class about their work.

David Major, who plans to study computer science, had little exposure to experimental science before he took the seminar, he said. "I think the class has taught me to think in a more logical and experimental fashion," he said. "Professor Tilghman has taught us to read these hard, complex papers despite us not being scientists or even science majors. It's really interesting to study science not from textbooks or lectures, but through genuine academic papers and engaging class discussion."

Major particularly enjoyed reading the seminal 1993 paper of Princeton evolutionary biologists Rosemary Grant, a senior biologist, and Peter Grant, the Class of 1877 Professor of Zoology, Emeritus. The Grants, who have spent 30 years studying Darwin's finches in the Galapagos Islands, have shown through their work that evolution can occur on observable timescales. Tilghman invited the Grants to speak to the class about their work.

"One common theme is the passion and determination many of the scientists had for their work," Major said. "One of the most important things Professor Tilghman taught us is that there is no one 'trick' to designing a great experiment. A lot goes into it: determination, questions, the methods you choose to test your hypothesis and, frequently, sheer luck." 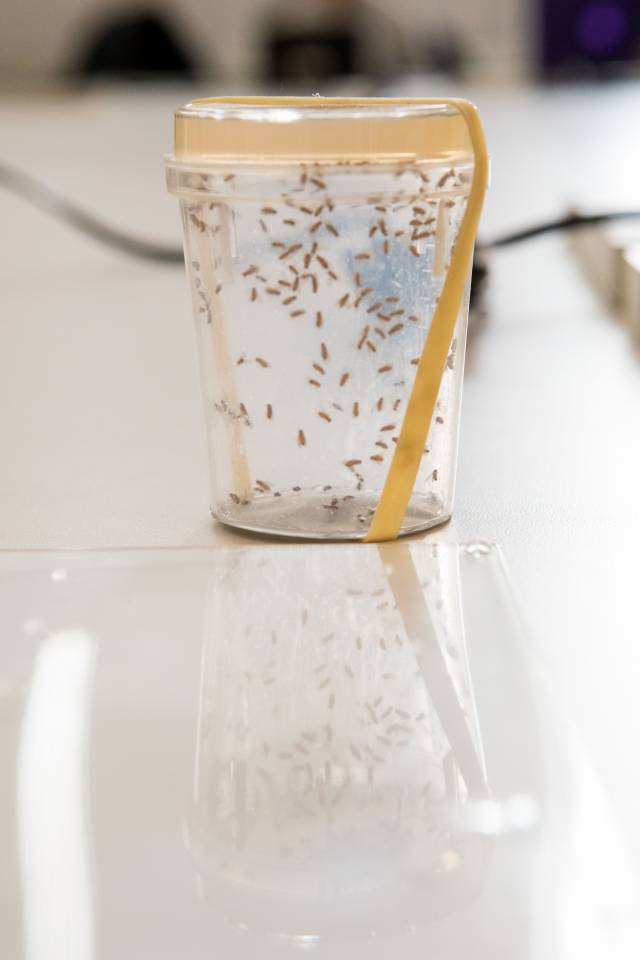 Each week, the students discuss the characteristics that made an experiment great, such as simplicity, novelty, persistence and choice of test organism, such as fruit flies (above). Most important, Tilghman said, is that every great experiment "started with a great question."

On April 4, the class discussed a paper published in the journal Cell in 1989 about cell-to-cell interaction in embryos of the roundworm Caenorhabditis elegans. Described by Tilghman as "an example of a really beautifully written paper," the research presented a model for cell interactions that has since been found to apply to numerous organisms, including humans. The authors, Geraldine Seydoux, a professor of molecular biology and genetics at Johns Hopkins University, and Iva Greenwald, a professor of biological sciences at Columbia University, were at Princeton at the time.

Discussing the paper, the students observed that the characteristics that made the experiment great seemed consistent with the other studies they'd read. Novel and systematic. Simple: "You don't have to be fancy to do a great experiment," Tilghman said. And, importantly, she said, "Every one of the great experiments we've looked at has started with a great question."

Kate Leung, who plans to study policy and public affairs, said her favorite study was the 1982 paper in Science published by Stanley Prusiner, who discovered that neurological diseases such as mad cow disease are caused by folding proteins known as prions. Prusiner persevered against a scientific dogma that all infectious agents contained DNA or RNA, which proteins do not.

"At the time he did his experiment, his theories were lambasted by other scientists because they went against the prevalent theories at the time," Leung said. "We learned that a lot of times it takes tenacity and very deliberate experimental choices in order to succeed.

"At the outset, I believed that it would be very difficult to conduct a great experiment," she continued. "I was right about that, but I think one of the things that surprised me was how often great discoveries are made on accident. I also think that it takes a very good choice of organism and design in the beginning of the experiment to make a great experiment — we saw those choices have great influence over and over again."

Ty Gardner, who plans to major in molecular biology, said that the class has provided him with a crucial scientific foundation.

"As a prospective science major, I figured that the best way to learn how to perform my own experiments would be to study the great ones of the past," Gardner said. "I feel much more prepared to read scientific papers. I came into this course barely knowing how to approach them, and now I know how to methodically break them down into sections to obtain the information I need to know." 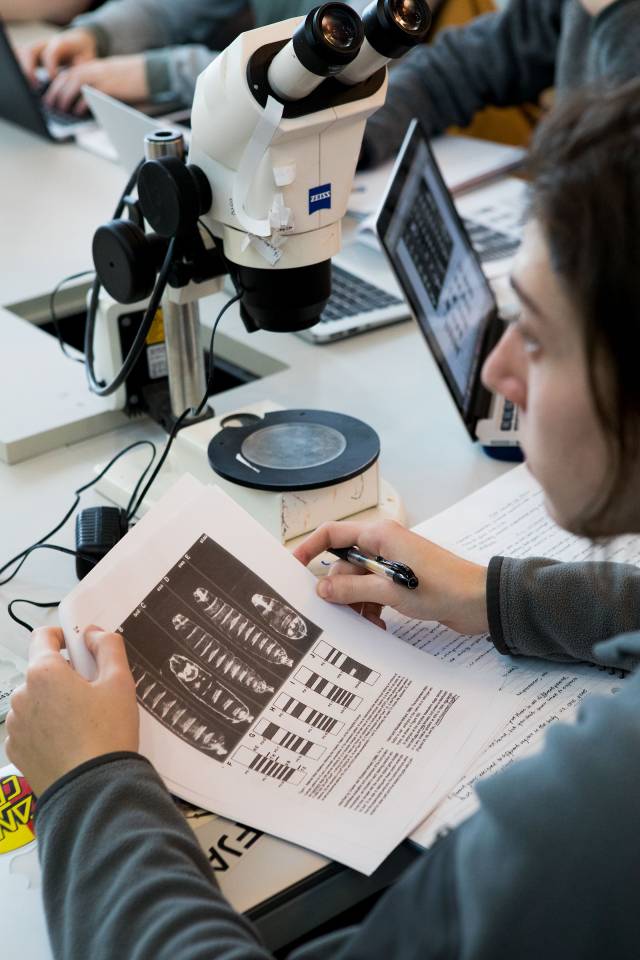 Reed Hutchinson follows along as the class discuss Wieschaus' Nobel Prize-winning work on embryonic development based on experiments conducted on fruit flies.

Gardner said that the elegance of research such as the 1958 experiment by biologists Matthew Meselson at Harvard University and Frank Stahl at the University of Oregon that demonstrated how DNA replicates showed him that discovery is not solely based on being painstaking. "My previous understanding of great experiments was that the key was simply to explore every possible option," he said. "A perfectly crafted experiment like that of Meselson and Stahl can determine truth with nothing more than a few deliberate steps. This way is far less tedious but requires more creative and careful thinking.

"The strongest feature of the class is without a doubt Dr. Tilghman herself," Gardner said. "She brings so much expertise from her personal experience as a scientist and the head of a research university. Many of the authors of the papers we studied were her colleagues and good friends, so she could provide particular insight into their ways of thinking."

Tilghman, who has taught freshman seminars since 1992 — including one on epigenetics during her last few years as president before she stepped down in 2013 — said that the seminars provide her the opportunity to interact with students early in their academic careers and build relationships that often last well beyond the course.

"I just got an email from one of my students from the 1992 course," Tilghman said. "It is one of the most satisfying ways to teach in my view, as I get to know the students very well, and often keep in touch with them during the rest of their Princeton education."

Leung took the course partly because Tilghman served as thesis adviser and a mentor to her father, who received his bachelor's degree in molecular biology from Princeton in 1988. Though initially not focused on molecular biology courses, Leung now plans to take more while at Princeton.

"It's really impactful for me to take a class with her because she's been my role model for a long time," Leung said. "I admire her as someone who has been a really strong female leader in all of the aspects of her career. Second, she's an excellent teacher. The way that she explains experiments and talks about the history of the field has made me very excited about what we're learning." 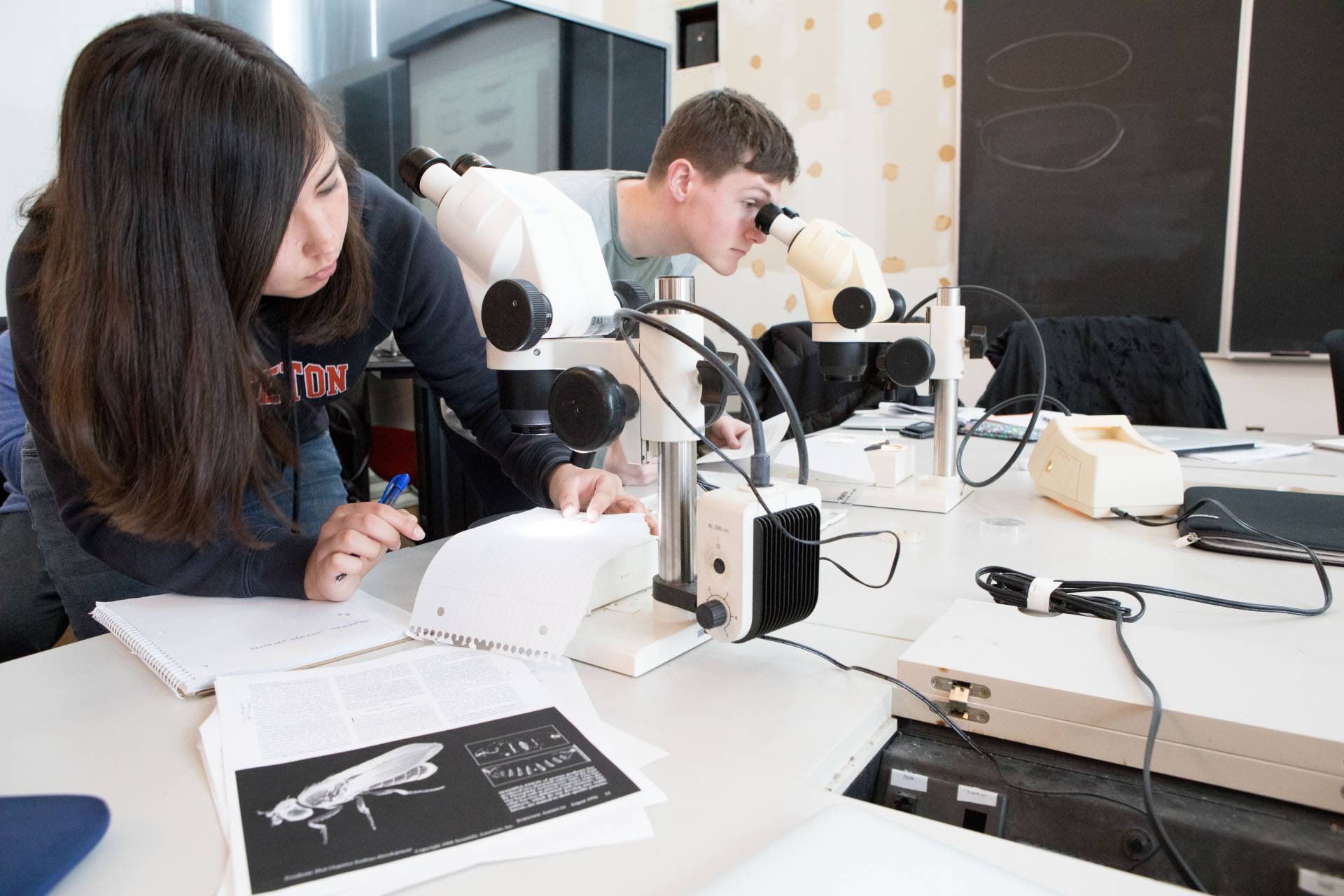 Kate Leung and Thomas Hoopes examine fruit flies under the microscope. Leung, who took the course partly because Tilghman served as thesis adviser and a mentor to her father, was initially not focused on molecular biology courses but now plans to take more while at Princeton.

Readying for research: Classes bring cutting-edge equipment into the hands of undergrads