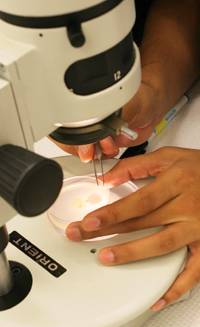 “Molecular Biology 101: From DNA to Human Complexity” is an introductory course for non-majors that takes a new approach to teaching the basics through lectures and labs.

Below left:  Professors Bonnie Bassler (seated on table), Heather Thieringer (standing in rear) and Eric Wieschaus (third from right) have teamed up to teach the class since its inception four years ago.

Freshman Emily Miller never thought fulfilling her science requirement would be so much fun: Imagine getting to clone some of your own DNA, replicating part of a Nobel Prize-winning experiment or actually staying awake — and understanding! — when your professor starts talking about things like “cell differentiation” and “genome codes.”

“In general, science topics do not interest me, but I love this class,” said Miller, who this fall enrolled in “Molecular Biology 101: From DNA to Human Complexity,” an introductory course for non-majors that takes a new approach to teaching the basics. “Rather than simply lecturing about the minute details of molecular biology, the professors show us how it applies to real life.”

MOL101 was developed four years ago by three renowned Princeton professors to help address a disturbing national problem: Too many Americans are intimidated by and ignorant of science in an era when a basic understanding of molecular biology, in particular, has never been more important.

“We felt as a faculty that we were not doing our job as educators because we did not have a modern class for non-majors,” said one of the course’s leaders, Bonnie Bassler, a professor of molecular biology and a 2002 MacArthur “genius grant” winner. “We really believe that you cannot get through this life without knowing biology. It is the science of the century. You need to know about biology to think about your health care, to decide on what food you’re going to eat. You need it to understand how cells work to be able to vote on issues like stem cell research. You need it to understand DNA forensics, so you can serve on a jury.”

Each year Bassler teams up with 1995 Nobel Prize winner Eric Wieschaus, the Squibb Professor in Molecular Biology, and geneticist Heather Thieringer, a lecturer in the department, to teach humanities majors the fundamentals of molecular biology. Lectures address topics currently of public interest, including cloning, stem cell therapies, genetically modified foods, drug-resistant bacteria, how DNA fingerprinting is used in criminal cases and why some people are obese or aggressive.

Though many students said they were taking MOL101 to fulfill the science and lab courses required for graduation from Princeton, they give the class high marks for being unexpectedly interesting. “The professors are fun and so passionate about what they teach; they bring enthusiasm to every lecture and it is contagious,” said freshman Samantha O’Hara. “The 50 minutes fly by.”

The professors say they strive to teach the subject matter in a way that is informative, entertaining and not intimidating. “People are so scared of science,” Bassler observed. “We try to teach them that they don’t need to be afraid, that they can sit down and read the science section of The New York Times or those articles in Scientific American. They just have to learn some of the lingo.”

The professors insist such education is critical in a country where science permeates the debates on everything from stem cells to global warming, yet an alarming number of Americans lack the knowledge necessary to make informed choices. Supporting their concerns are national surveys which have revealed, for example, that one in five adults thinks the sun revolves around the Earth, fewer than a third of Americans can identify DNA as a key to heredity and most people do not know what molecules are.

“Scientific illiteracy is shocking because people make decisions in spite of not knowing things that are available for them to know,” said Wieschaus. “But our social and ethical considerations have to be based on reality, on the facts — what it is when we talk about DNA testing, forensics, genetics and human behavior. You can’t deal with any of these topics unless you know what a gene is and how a gene product functions in a cell.”

Students learn about such topics not just from lectures, but also in the labs, which they cited as an exciting part of MOL101. Thieringer is the guiding force here, and she runs all the experiments based on a simple educational philosophy: “Labs don’t have to be something that students dread. We want our students to say, ‘Oh, we’re going to do something in lab today. It’s going to be fun.’”

In the lab, the students actually get to clone part of their own DNA using a procedure called polymerase chain reaction or PCR. “I really liked our PCR lab,” said junior Abigail Langer. “It was so incredible to be able to analyze your own genes. I know it sounds really dorky, but seeing yourself on a molecular level is really cool, and how many other opportunities is a German major like me ever going to get to sequence her own DNA?”

In other labs, the students observe cells dividing and see chromosomes pulling apart, and they even perform some of the same experiments on fruit fly embryos that led Wieschaus to win the Nobel Prize in Physiology or Medicine.

Students observe and analyze four “mystery” embryos that contain particular genetic mutations and compare them to “mug shots” of sample dead embryos. “The students have (fly) lines that are still from the original Heidelberg screen,” said Wieschaus. “Different lines produce different kinds of things that are abnormal, and the students just have to look at the embryos and figure out which of them are abnormal and why — and what must have gone wrong.”

Through this lab, the students gain insight into why their professor’s work was so groundbreaking: By painstakingly identifying and classifying these mutations, Wieschaus, along with German scientist Christiane Nusslein-Volhard, was able to show how genes control the overall development of the body plan not just of fruit flies but also higher organisms such as humans. The breakthrough could help scientists explain birth defects and cancers.

In highlighting these larger connections, the professors said they hope their students will come to see why molecular biology is so important — and fascinating. “The things that we know about DNA are one of the great accomplishments of the past century,” said Wieschaus. “Even beyond the social issues, the pure beauty of scientific understanding is amazing.”