Differences in factors such as income, education and marital status could contribute overwhelmingly to the gap in life expectancy between blacks and whites in the United States, according to one of the first studies to put a number on how much of the divide can be attributed to disparities in socioeconomic characteristics.

Numerous existing studies on the topic have found that mortality differences are associated with certain socioeconomic disparities, but have not determined to what extent the life expectancy gap can be explained by such contrasts, noted author Michael Geruso, a doctoral student in Princeton's Department of Economics.

Geruso pulled mortality information from the National Longitudinal Mortality Study (NLMS), a nationally representative survey of households led by the U.S. Census Bureau that examines the demographic and socioeconomic factors related to death. He concluded from this data that the average life expectancy from age 1 — the NLMS does not fully capture neonatal and infant mortality — as 71 for white men and 66 for black men over the study period. White and black women lived an average of 78 and 74 years from age 1, respectively. These figures match statistics from the U.S. Centers for Disease Control and Prevention.

A Princeton University study reveals that socioeconomic differences can account for 80 percent of the life-expectancy divide between black and white men, and for 70 percent of the imbalance between black and white women. The study author calculated from the life expectancy from age 1 for men and women of both races based on the National Longitudinal Mortality Study (NLMS), a nationally representative survey of households led by the U.S. Census Bureau that examines the demographic and socioeconomic factors related to death. These estimates are similar to average life expectancies reported by the U.S. Center for Disease Control and Prevention's National Center for Health Statistics (NCHS). (Information supplied by M. Geruso)

As a stand-alone factor, income accounted for 52 percent of the life-expectancy difference between black and white men, and 59 percent of that for women. For both genders, income was twice as high as the second most significant factor, education. After controlling for income and education, racial imbalances in other factors exhibited little power to explain racial differences in mortality.

Geruso explains his findings as follows:

"The most important contribution of this research is that it evaluates the relationship between socioeconomic status and racial gaps in mortality for almost all ages and using an unusually rich set of socioeconomic variables. It offers a precise, quantitative answer to a question many people are interested in: How much of the glaring disparities in life expectancy between blacks and whites might be explained by differences in a relatively small set of socioeconomic characteristics?

"What was really shocking to me was that no one had already done this study. The basic research question is one that has certainly been asked over and over, and dozens of good studies have chipped away at it. But for a variety of reasons, past studies haven't offered a precise or complete answer, either because of a lack of detailed data or methodological limitations.

"Instead, many existing studies are limited to examining mortality differences over a narrow age range and using incomplete data on socioeconomic variables — for instance, income but not education, or vice versa. The interested reader could perhaps cobble together the results of a dozen studies, but that would provide an impression, not a result. One would be left with only a qualitative sense of how the relationship between socioeconomic status and mortality might contribute to the life expectancy gap between blacks and whites in the United States. 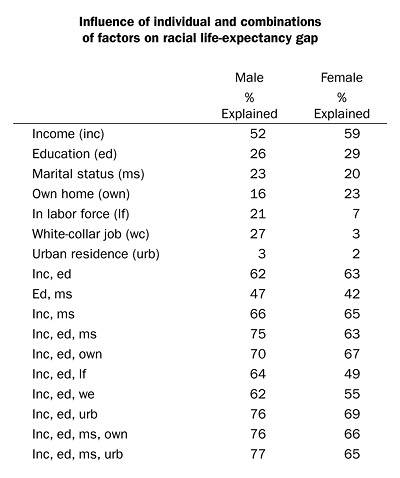 "For some parts of the exercise, I matched the samples along a single characteristic, such as income, education or occupation. In others, I matched many characteristics simultaneously. This allowed me to answer questions such as, 'How important are group differences in marital status in explaining the disparity in life expectancy when income and education are equal?' The richness of the socioeconomic information in the dataset was critical for this.

"My findings are consistent with previous studies in the sense that those tend to conclude that much of the life-expectancy gap between blacks and whites are the result of socioeconomic differences. I was surprised, however, that socioeconomic status explains such a large percentage of the gap and that just a few variables are able to account for it.

"Household income alone accounts for more than half of the racial imbalance among both men and women, while more than a quarter of the gaps can be attributed to educational differences alone. Some stand-alone factors had more importance depending on gender. For men, occupation explained 27 percent of the lifespan gap, versus 3 percent for women. Home ownership, which served as a proxy for wealth, accounted for 23 percent of the female mortality difference, but only for 16 percent of the male gap.

"I tested various combinations of variables to determine their total association with life expectancy. One interesting finding is that once I control for income and education, then unemployment, job type, urban residence and marital status all have very little residual power to account for the mortality gap, especially for women. For example, differences in income and education account for 63 percent of the mortality gap between white and black women, but additionally controlling for several other socioeconomic variables never brings the total proportion of the gap explained above 70 percent.

"I was surprised that among respondents in each race group with similar income and education, marital status was significantly more influential in my data for men than for women. For men, marital status accounts for up to an additional 13 percent of the racial life-expectancy gap, while marriage had almost no additional benefit for women, once income and education were held constant.

"Other researchers have suggested that the reason marriage might benefit men is because of social ties and relationships they gain through their wives. On the other hand, women may largely benefit in terms of a bump in household income. That's at least consistent with what I found because once I control for income and education I remove the supposed monetary benefit of marriage for women, but not the social benefit for men."

This research was published online Jan. 28 in the journal Demography.

Geruso is available to discuss his research with interested members of the news media and can be contacted at mgeruso@princeton.edu, or through Princeton University science writer Morgan Kelly at 609-258-5729 or mgnkelly@princeton.edu.

Link between income and happiness is mainly an illusion