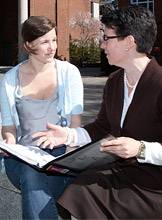 Lauren Brachman, who is majoring in sociology, focused her senior thesis on the experiences of patients and clinicians in fertility clinics. Brachman (left) discusses reproductive issues with Associate Professor of Sociology and Public Affairs Elizabeth Mitchell Armstrong (right), who served as her thesis adviser.

Brachman explored patients and clinicians' experience with in vitro fertilization (IVF), in which embryos are formed outside the body and then transferred into a woman's uterus. Brachman, who was conceived through IVF, spent more than 90 days over the last summer and winter break at a California fertility clinic, observing and conducting interviews. In her thesis, she identified new norms that have emerged since the first IVF clinics opened in the 1980s, as access to the practice has expanded and as the culture around it has changed. 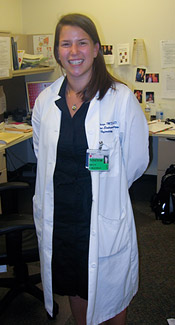 Brachman's fieldwork at a fertility clinic in California, made up of both patient-clinician observation and interviews, serves as the basis for her thesis. (Photo courtesy of Lauren Brachman)

"Many people (sociologists) enter clinics, and their projects are to share all the pain and struggles that happen there. I recognized that history, but I was more intrigued by what sociologists would call alterity — the alternative possibilities that exist in a space of deviance" from the normal pathway to pregnancy, Brachman said.

Brachman found her topic during her junior year, when she took the class "Born in the USA: Culture and Reproduction in Modern America" with Associate Professor of Sociology and Public Affairs Elizabeth Mitchell Armstrong. For the first class assignment, students had to talk to their parents about their birth stories.

"When I asked my parents to recount their stories, three years of sociology kicked in. I interviewed them separately and noticed similar themes in the narratives they were telling," Brachman said. "I thought it would be interesting to enter a clinic and talk to other patients."

Brachman's thesis was extraordinarily ambitious in scope and achievement, from the amount of participant observation to how the background reading informed the conclusions, said Armstrong, who became Brachman's thesis adviser.

"Lauren is a sociologist through and through; one of the reasons this thesis is a standout is because Lauren has excelled at every step of the thesis project," Armstrong said. "She struck gold in her research site and she has been mining that lucky strike with tremendous skill, devotion and care ever since."

Brachman conducted her fieldwork at the clinic where her parents received care to conceive her older sister. She interviewed 13 clinicians, including physicians, IVF nurse coordinators, procedure room nurses and embryologists. Among the 22 patients she interviewed were intended parents (including straight and lesbian couples), ovum donors, gestational carriers and patients undergoing cryopreservation to preserve their genetic material for future use. In addition, Brachman observed consultations and medical procedures.

Brachman's trips to California for research and transcriptions of her interview and observation recordings were funded by an Adel Mahmoud Global Health Scholars Program fellowship. In addition to studying sociology, Brachman is pursuing two certificates, in gender and sexuality studies and global health and health policy. 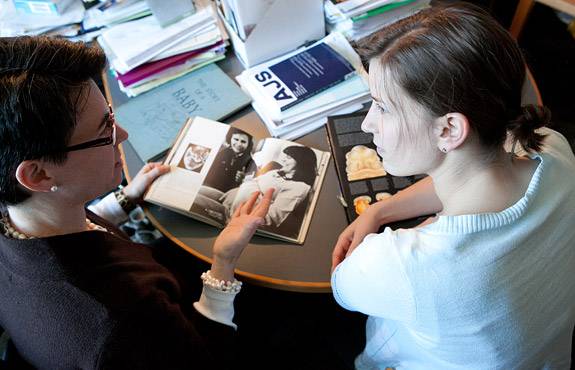 An assignment for the class "Born in the USA: Culture and Reproduction in Modern America," taught by Armstrong (left), is the inspiration for Brachman's thesis. (Photo by Denise Applewhite)

Her thesis examines four main issues: men's roles in the clinic; the decision to tell others about undergoing IVF; spirituality and other ways in which people make meaning of the process; and an analysis of the people's responses to the question, "Where do babies come from?"

Brachman identified multiple roles that men play in the clinic: as general support to their partners; as medical support, conducting research at home; as patients, when the male partner is the partial or whole source of infertility; and as expectant fathers.

"Men nickname their embryos or the actual follicles in an ovary. They're talking about potential birthdays and names and narratives and how they're going to tell their children" about the pregnancy, Brachman said. "A lot of that is facilitated through these new medical technologies, like ultrasounds. For instance, an intended father will buy a home Doppler, because he's had so much experience with ultrasound in the clinic. That happened with one patient, and his partner told me, 'Whenever he doesn't feel connected to the baby, I can tell he's going to bring it out.'"

Brachman noted that patients she spoke to had a strong drive to share information about their experiences and their specific care, and the topic of IVF was prevalent in the media they consumed and among their friends and co-workers.

Brachman said she was surprised to discover that spirituality played a large role in the health care providers' perception of their work. "When you're an embryologist and you're telling me that babies come from God, there's very interesting cultural work being done," Brachman said.

She found that IVF patients expressed their spirituality in nuanced ways. "Patients would say babies come from God, but they didn't feel the same way about embryos produced through IVF," she said. "A lot of things are defined by this potential imagined child or outcome. … When a baby is not in play, things are much more easily dismissed."

Brachman said she felt compelled to address her personal relationship to the subject in her thesis.

"I've had a super-positive experience with IVF — I exist!" she said. "It would be wrong if I didn't say that influenced the questions I asked and how I understood people. … That's one of the things I like about sociology and anthropology. They don't shy away from the idea that the researcher has perspectives or bias, but that doesn't say the work is not worthwhile."

After graduation, Brachman, who is from Westfield, N.J., will be working at a New Jersey fertility clinic — the one at which she was conceived — doing lesbian, gay, bisexual, transgender, queer community outreach and support, as well as supporting the clinic's administrative and medical functions. She plans to pursue graduate school in social work or public health, or both, and a career in marriage and family counseling and therapy.