When Olga Troyanskaya's dog Jessy fell ill in early 2006, the vet had painful news. "The doctor told me she had less than a week to live," Troyanskaya said.

Troyanskaya sought a second opinion with a dog cancer specialist, with an unexpected result: The appointment launched an innovative research collaboration to learn more about cancer, possibly leading to new treatments for dogs like Jessy and humans as well.

At the appointment, Troyanskaya, a computational biologist at Princeton University, got to talking with Jessy's canine oncologist, Karin Sorenmo, head of the small animal oncology service and an associate professor of oncology at the Ryan Veterinary Hospital of the University of Pennsylvania.

The two researchers discovered that they share a goal to learn about how to understand and treat cancer. Troyanskaya was interested in the genes involved in cancer; Sorenmo wanted to explore the mechanisms of cancer to find new ways to treat her patients, most of them well-loved pets.

"A collaboration seemed like a unique way to look at the question of cancer progression," said Troyanskaya, an associate professor of computer science with a joint appointment in the Lewis-Sigler Institute for Integrative Genomics at Princeton.

It is also a way to help dogs like Jessy, she said. For years, Jessy was Troyanskaya's canine collaborator, accompanying the scientist to the lab where she'd station herself next to her owner's desk.

Relying on a comparative approach

After months of conversations while Jessy was treated with chemotherapy, Troyanskaya and Sorenmo started a collaboration between their two laboratories, which are located about 50 miles apart.

Sorenmo provides samples of tumors that she has extracted from her canine patients during surgery and Troyanskaya analyzes the genes in the tumors.

All of Sorenmo's patients developed cancer through natural processes, just as humans do. She treats them with the same types of therapies humans receive, including radiation, chemotherapy and surgery. She and her colleagues examine each extracted tumor, noting its size and other attributes, but now with the Princeton collaboration, Sorenmo can learn much more about the cancers she treats. 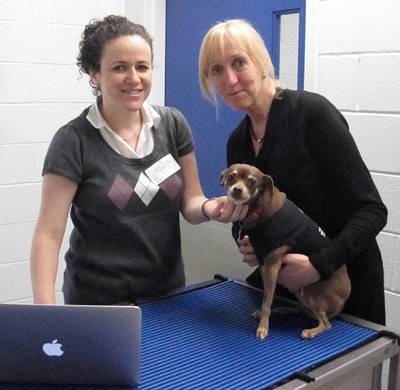 Computational geneticist Olga Troyanskaya of Princeton University (left) and Karin Sorenmo, a veterinary oncologist at the University of Pennsylvania Ryan Veterinary Hospital, pose with Sorenmo's dog Ruby. The two scientists are collaborating on a study to explore genetic factors contributing to mammary cancer growth in dogs being treated at the hospital, with the goal of enhancing the understanding of cancer in both dogs and humans. (Photo courtesy of Olga Troyanskaya)

The study of naturally occurring cancer in animals, and its application to human cancer, is called "comparative oncology." Sorenmo is a leader in this emerging field. Comparative oncologists recognize that much can be learned about cancer by comparing animals and humans.

"Dogs get all the same cancers that humans get," said Chand Khanna, director of the Comparative Oncology Program at the Center for Cancer Research, which is part of the U.S. National Cancer Institute. "With dogs, we can ask many questions that one cannot ask in mouse preclinical models of cancer and cannot answer in human clinical trials."

Troyanskaya and Sorenmo are looking for answers by studying a type of cancer that poses a high risk for both dogs and humans: mammary cancer.

Mammary tumors are the most common kind of tumor in female dogs that have not been spayed. Breast cancer is the most commonly diagnosed cancer in women, striking one in eight women during their lifetime.

Yet not all dogs or women succumb to the disease: In some individuals, the tumors are benign and grow slowly over years, while in others the cancerous cells grow rampantly and eventually kill. Troyanskaya and Sorenmo hope to learn more about why this is so.

Canines are helpful in the study of mammary cancer for another reason: Each female has eight to 10 mammary glands, making it possible to study several tumors — each arising separately from the other and therefore genetically unique — in one individual. Studying separate breast tumors in humans is usually not possible because it is rare for a woman to develop more than one spontaneous tumor in the breast.

By studying different tumors isolated from a single dog, the investigators can hone in on gene signatures related to tumor development without having to subtract out gene signatures from the rest of the body. "In humans, a lot of times the variability is so large across individuals that it completely masks any signal of progression-related variability between the tumors," said Troyanskaya. "With dogs, you can look at tumors at different stages of cancer progression in the same genetic background, within each individual."

At Princeton, Troyanskaya's team has begun evaluating the tumor samples to look for genetic signatures that may be correlated to the progression of mammary cancer in dogs. This type of genome-wide search became possible with the sequencing of the canine genome in 2005.

To evaluate the genes in the tumors, Troyanskaya's group, which includes molecular biology graduate student Dmitriy Gorenshteyn, isolates the genetic material in the tumor samples. The investigators look at which genes are turned on, or "expressed," and which are turned "off." They try to tie the resulting gene expression pattern to tumor attributes such as rapid growth.

The dog genome provides special challenges because dog breeds have different genetic variations. Using statistical methods, the researchers have already started identifying the canine equivalents of human genes based not only on their sequence, but also on their functions in the body. "The vast majority of dog genes have a corresponding human gene," Troyanskaya said.

An expert in combining computer science with biology, Troyanskaya has developed computer programs that can sort through the data generated by the genome-scale gene expression studies to detect patterns of gene expression that correlate with increased tumor size. The team, which includes quantitative and computational biology graduate student Jonathan Goya, plans to follow up the gene expression studies with a search for other abnormalities such as extra copies of genes, known as copy number aberrations, and changes in protein levels. Eventually the group hopes to link genetic pathways to the progression of a tumor from a harmless overgrowth of cells to a deadly spreading malignancy. 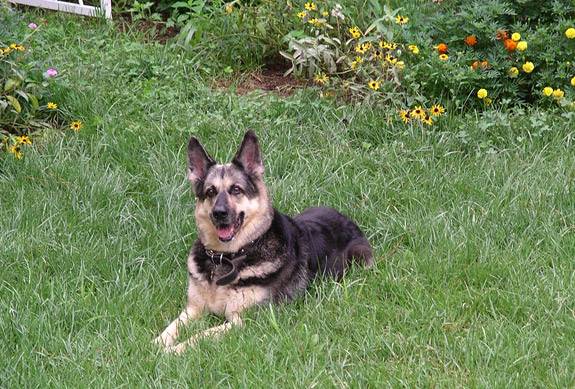 When being treated for cancer, Jessy, Troyanskaya's dog, brought the Princeton researcher and Sorenmo together, launching their ongoing research collaboration. (Photo courtesy of Olga Troyanskaya)

At the beginning of the collaboration, Sorenmo collected samples of tumors that she surgically removed from Penn vet clinic patients, typically pet dogs from comfortable homes. But it nagged at her that homeless dogs were not able to get similar care.

Stray dogs are also the least likely to have been spayed, and the resulting hormone levels put them at much greater risk than spayed animals of developing mammary tumors.

To help homeless dogs, Sorenmo started the Penn Vet Shelter Canine Mammary Tumor Program in 2009 to provide cancer treatment to dogs living in shelters. "The shelter program is a way to provide high-quality care for some of the neediest dogs, while helping to further our knowledge of both canine and human breast cancer," Sorenmo said.

Under the program, which is funded by family foundations, shelter dogs are treated for cancer free of charge. Dogs that are later adopted continue to obtain follow-up treatments at no cost to the owner. Lisa Hertzog, a resident of Reading, Pa., has adopted two dogs participating in the program. "It is really a rewarding experience," she said. "The dogs are really loving, and they give back so much more than what you give them."

Since beginning the collaboration with Troyanskaya, Sorenmo and her colleagues at Penn have operated on more than 60 shelter dogs. Studies of these samples are already starting to reveal factors that may help clinicians predict the progression of the tumors.

Despite its advantages, comparative oncology — which involves pets rather than laboratory animals — is not yet a mainstream approach to studying human cancer. To fund her initial studies, Troyanskaya received funding from Princeton's Project X, a fund set up by businesswoman and philanthropist Lynn Shostack to support pioneering and speculative projects.

Further help came this January from 2 Million Dogs, a new foundation dedicated to finding cures for canine cancer. Its founder, Luke Robinson, walked 2,000 miles from Austin, Texas, to Boston in 2008 to raise awareness of canine cancer and build a grassroots network of dog lovers and cancer researchers. He met Sorenmo on his walk through Philadelphia, and the foundation awarded its first grant to the collaboration between Sorenmo and Troyanskaya. In January, 2 Million Dogs presented a $50,000 check to the researchers to help them purchase the laboratory supplies for the study of genes involved in canine cancer.

"This work is incredibly important to anyone who has had a loved one, whether dog or human, who has had cancer," said Robinson, whose dog Malcolm died of cancer.

Through the work funded by 2 Million Dogs, Troyanskaya and her team hope to find gene expression patterns that govern the transformation of a tumor from a benign to malignant state, contribute to tumor growth and govern metastasis. The investigators anticipate that their studies will be a starting point for developing diagnostic methods that veterinarians and doctors can use to predict whether a newly discovered tumor will grow slowly or rapidly. They also hope to identify novel pathways that could serve as targets of new drugs to treat cancer.

Troyanskaya's faithful laboratory assistant and canine companion Jessy succumbed to cancer six months after beginning her treatment. But Troyanskaya is optimistic that the collaboration that emerged from Jessy's illness will provide a lasting legacy. "We have the potential to contribute new findings that could lead to better cancer diagnosis and treatments for humans and for our dogs," she said.