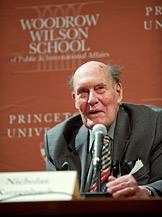 Nicholas Katzenbach, a Princeton University alumnus and trustee emeritus who was a towering figure in U.S. civil rights history, died of natural causes Tuesday, May 8, at his home in Skillman, N.J. He was 90.

Katzenbach entered Princeton as a member of the Class of 1943 and, after serving in World War II, graduated in 1945. He remained closely affiliated with the University decades after his graduation, serving as an alumni trustee from 1971 to 1975 and as a charter trustee from 1977 to 1987.

"Nick Katzenbach was a key member of the Princeton board of trustees during almost all of my tenure in the president's office (14 of the 16 years), and I knew him very, very well," said Princeton President Emeritus William G. Bowen. "He was truly 'one of a kind': a gentle giant of a man, as kind, compassionate and humorous as he was brilliant."

During his second term as a University trustee, Katzenbach chaired the Trustee Committee on the Curriculum. In this role, he presided over major steps taken to strengthen the faculty, including setting the course for the current life sciences departments and programs at Princeton.

Bowen recalled, "Mr. Katzenbach was also important behind the scenes in working with many of us on innumerable statements about every imaginable issue, including [investments in] South Africa — and some not so imaginable issues too! At one testy moment, someone (another trustee, I think) challenged Nick by asking him pointedly: 'Don't you believe in principles?' To which Nick responded: 'Of course, but I also believe in consequences.'"

Katzenbach's commitments to principles and consequences defined his historic public service efforts as a member of the Kennedy and Johnson administrations in the 1960s. In 1962, he was named deputy U.S. attorney general and worked with Attorney General Robert Kennedy in overseeing the desegregation of the South, including representing the federal government at the University of Mississippi to enforce a court order requiring admission of the school's first African American student.

In 1963, Katzenbach was charged with delivering President John F. Kennedy's orders to integrate the University of Alabama and allow two African American students to attend. Katzenbach famously confronted then-Gov. George Wallace outside the main campus building to ensure the students' registration after Wallace vowed to block their admission.

Katzenbach drafted and — serving as President Lyndon Johnson's liaison to Congress — secured passage of the landmark 1964 Civil Rights Act. In 1965, Johnson named him U.S. attorney general. After leaving the Justice Department in 1966, Katzenbach served as undersecretary of state until 1968, helping to map strategy for the Vietnam War.

Recognizing his standing as a pivotal figure in this watershed period of U.S. history, the Princeton Alumni Weekly magazine ranked Katzenbach as No. 16 among the most influential University alumni of all time.

"It was something he was very proud of," said his son John. "We used to kid him about being No. 16. We told him if he kept working at it, he might get higher on the list."

His son noted that Katzenbach's ties to the University remained strong throughout his life, even during the months he was held in a German prison camp after his plane was shot down over the Mediterranean in World War II.

"Princeton and the University were never far from his heart. Even when he was in POW camp in Germany, the books he read were the books he would need to graduate," John Katzenbach said.

Katzenbach left Princeton during his junior year to serve in the war and completed his bachelor's degree in public and international affairs in 1945. As a Princeton student, he played freshman and junior varsity hockey and soccer, and was a member of Cottage Club. After earning his undergraduate degree, he went on to graduate from Yale Law School and to study at the University of Oxford as a Rhodes Scholar.

In 2011, Katzenbach returned to Princeton's Woodrow Wilson School of Public and International Affairs to participate in a panel discussion on the Kennedy administration and civil rights. He was joined by two fellow Princeton alumni and key civil rights figures: John Doar of the Class of 1944, the former assistant attorney general for the Civil Rights Division of the U.S. Department of Justice, and civil rights prosecutor in the "Mississippi Burning" trial; and Harrison Jay Goldin of the Class of 1957, the former attorney in the Department of Justice Office of Civil Rights who was assigned to be roommate of James Meredith as he became the first African American student to attend the University of Mississippi. It was believed to be the first reunion of the three men since the 1960s.

"One of our family's favorite possessions is a famous Richard Avedon photograph of Nick, John Doar and James Meredith (signed by all three), celebrating the integration of the University of Mississippi 25 years later," Bowen said. "It hangs in my study — as it always will."

Katzenbach is survived by his wife, Lydia; his sons, John and Christopher; his daughters, Maria (a 1976 Princeton graduate) and Anne; and six grandchildren. A gathering in his honor will be held at noon Thursday, June 21, in Richardson Auditorium of Alexander Hall on the University campus.