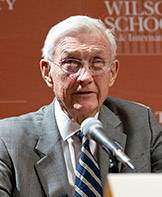 John Doar, a 1944 Princeton graduate and nationally prominent civil rights attorney who as a University trustee from 1969 to 1979, played an instrumental role in the University's response to the Vietnam War, died of congestive heart failure at his home in New York City on Nov. 11. He was 92.

"John Doar was a remarkable man who lived a life of impact, conviction and quiet leadership. We have lost a great Princetonian, and he will be missed," said President Christopher L. Eisgruber.

Doar's tenure as a trustee began during President Robert F. Goheen's administration. In 1972, Doar chaired a trustee committee considering the ROTC status on campus during the Vietnam War. Doar served on the search committee for the next president, William G. Bowen, after Goheen submitted his resignation in 1972.

"John Doar was an extraordinary trustee, whose moral stature and unwavering commitment to principle made him an invaluable member of the board," Bowen said. "He was a resolute supporter of the ROTC program, and he contributed greatly to our achieving a balanced and nuanced discussion of that highly charged issue — no mean accomplishment in those days."

Bowen lauded Doar's leadership during discussions of how the University should respond to the war in Vietnam. "I also remember clearly John's leadership during discussions for how Princeton should respond to the war in Vietnam," he said. "He bravely, and effectively, chaired a mass meeting [the Princeton Vietnam Assembly] in Jadwin [Gymnasium] in which his personal stature and obvious commitment to allowing all points of view to be heard, made an enormous difference. His entire manner at that meeting bespoke integrity and fair play — as did his entire life."

Doar was born on Dec. 3, 1921, in Minneapolis. He majored in the Woodrow Wilson School of Public and International Affairs at Princeton and earned a law degree from the University of California-Berkeley. He served as a pilot in World War II.

He went on to play a key role in the civil rights movement as assistant attorney general of the U.S. Department of Justice from 1960-67. He prosecuted several high-profile cases, including the "Mississippi Burning" trial; helped draft the Civil Rights Act of 1964; and escorted, along with U.S. marshals, James Meredith, the first African American student to attend the University of Mississippi. After spending some time in the private sector, he served as special counsel of the U.S. House of Representatives Judiciary Committee's impeachment investigation of President Richard Nixon.

"(H)e and I spoke on the phone often during the Nixon impeachment process, which he led so ably," Bowen said. He noted he treasures a photo that Richard Avedon took of Doar, Meredith and Nicholas Katzenbach of the Class of 1945, a former Princeton trustee and deputy attorney general during the Kennedy administration — celebrating the integration of the University of Mississippi 25 years later. The photo hangs over the mantel in Bowen's study.

Doar told The Daily Princetonian student newspaper in 1967 that his "first exposure to the idea of racial discrimination resulted from conversations with his southern roommates" while a Princeton undergraduate.

In June 1963, he famously addressed a violent crowd after the funeral of civil rights worker Medgar Evers. Doar, who stood well over 6 feet — a trait that had served him well as captain of the Princeton basketball team — loomed head and shoulders above the protestors. This iconic scene is depicted in a painting by Doar's cousin, the artist Frederick L. Doar III, Class of 1977, which is displayed in the Woodrow Wilson School.

John Doar often brought his experiences as a public servant back to Princeton in programs and lectures over the last five decades. He served as a Wilson School Senior Fellow from October to December 1974, going on inactive status as a trustee to avoid any conflict of interest.

In 2008, Doar and Katzenbach participated in a program commemorating the integration of the University of Alabama; both men played key roles in that landmark event. In a 2011 forum on 1960 civil rights activists co-sponsored by the Wilson School and Mudd Library, Doar appeared with Katzenbach and Harrison Jay Goldin of the Class of 1957 on a panel titled "John F. Kennedy and Civil Rights: Fifty Years Later." Also in 2011, Doar gave a talk, "Robert Owen '52: From Student-Athlete to Public Man," as part of the Princeton Varsity Club's Jake McCandless '51 Speaker Series.

Other notable appearances included: a careers panel in 1968; a 1974 speech hosted by Whig-Clio, in which Doar linked the outcome of the Nixon impeachment committee to the civil rights movement, saying he felt "the southern members of the committee had more freedom to voice their convictions"; a 1994 panel marking the 40th anniversary of Brown v. Board of Education; and a 1997 public conversation titled "What Is 'Educational' About Competitive Sports?" as part of a symposium on the student-athlete.

Doar was a longtime supporter of Princeton's fundraising efforts. He played key leadership roles in his class's Annual Giving campaigns, and served on the national Annual Giving Committee and on the committees for two major University-wide campaigns in the 1980s and 1990s. He also chaired the Princeton Parents Fund from 1980 to 1982.

In 1975, Doar was honored for his role in the Nixon impeachment hearings at Alumni Day with the Woodrow Wilson Award, an honor for a person who exemplifies Princeton's informal motto "Princeton in the Nation's Service and in the Service of All Nations." In 2000, he received the Class of 1967 PVC Citizen-Athlete Award. He also received the 2006 NCAA Inspiration Award, which recognized him as a varsity letter winner who "now serves a role model for others."

After his career in Washington, he became a partner in the New York City law firm of Doar Rieck Kaley & Mack. In 2012, he received the Presidential Medal of Freedom from President Barack Obama, along with Toni Morrison, the Robert F. Goheen Professor in the Humanities Emeritus.

Doar is survived by a brother; sons and Princeton alumni Michael, Robert, and J. Burke; a daughter, Mary Gael; several grandchildren, including John Doar, a Princeton junior; and a great-grandchild.