A video game designed for predatory fish might have unraveled some lingering evolutionary questions about group formation and movement in animals, according to new research that took a unique approach to observing interactions between real and simulated animals.

Princeton University researchers report in the journal Science some of the strongest direct evidence that collective motion in animal groups such as schools of fish can evolve as a finely tuned defense against attack from predators. This dynamic has been suggested by other research, but the many variables that can drive group movement have made it difficult to observe a direct link to self-defense, explained senior researcher Iain Couzin, an assistant professor of ecology and evolutionary biology at Princeton who studies collective animal behavior.

Couzin and his colleagues developed an evolvable simulation of small prey that allowed the researchers to observe how group formation and movement alone protect against predatory attack. Couzin developed and conducted the study at Princeton with two former postdoctoral researchers from his lab, first author Christos Ioannou, now a research fellow at the University of Bristol, and Vishwesha Guttal, now an assistant professor of ecological sciences at the Indian Institute of Science.

The researchers projected the simulated prey — which appeared as small reddish dots — onto one side of a tank containing the famously ravenous bluegill sunfish. The prey interacted spontaneously with one another based on encoded behavior traits, and the researchers documented in the prey the resulting individual behaviors and group formations. In the end, the bluegills were most likely to avoid attacking simulated prey that had formed coordinated and mobile groups.

Princeton University researchers designed a "video game" for predatory fish that demonstrated that collective motion in animal groups might have evolved as a finely tuned defense against attack from predators. The researchers projected simulated prey onto one side of a tank containing bluegill sunfish. The bluegills were most likely to attack isolated prey (clip 1) and groups that did not move much (clip 2). Simulated prey that formed coordinated and mobile groups were less prone to attack, showing that group formation itself can dissuade a predator. Courtesy of Science/AAAS

These results show that group formation itself can dissuade a predator, even if the prey — as in the simulation — are completely unaware of the danger, the researchers report. This suggests that the specific configuration of animal groups is an evolved defense in its own right, Couzin explained. The ideal configurations exhibited by the simulated prey mirror those of many animal groups, wherein individuals follow cues from their near-neighbors to coordinate collective movement.

"This sort of hybrid virtual approach has given us a way of tapping into these long-lasting questions that have really evaded standard analysis for decades," Couzin said.

"To conduct this type of study is very intensive in terms of statistics and creating control models of what predators would have done, given the prey that were available to them in that particular situation at that time and compare that to the behavior of the real behavior," Couzin said. "And that's one of the reasons why these studies have been so difficult in the past using classic experimental means."

An important aspect of the simulation is that it let the researchers control the behavior of individual prey, Couzin said. In nature, animals can respond to a predator in different and unpredictable ways — animals might react as the predator approaches or after the initial attack. In addition, group cohesion depends on the number of animals assembled and environmental factors such as terrain. 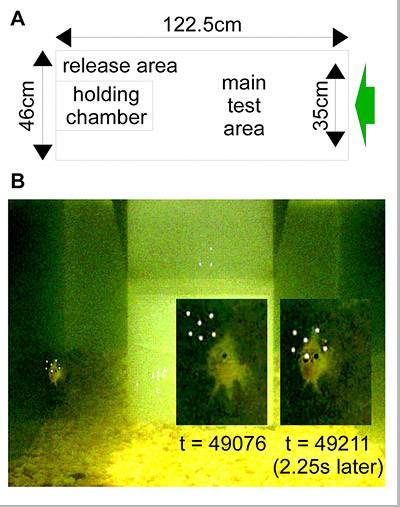 A simulation of 16 prey was projected (A, green arrow) onto a screen opposite the area from which a bluegill was released. Once the simulation began the individual prey would swim and form groups spontaneously based on three encoded traits — a tendency to be attracted to, swim in the same direction as, or ignore nearby individuals. The bluegills preceded each attack with a characteristic "hovering" behavior that allowed the researchers to approximate the time the fish took to make a targeting decision before striking (B, inset). Courtesy of Science/AAAS

For the Princeton study, the researchers encoded each individual prey with various strengths of three traits — a tendency to be attracted to, swim in the same direction as, or ignore nearby individuals. Thus, individual prey would either swim alone, group together, or follow other prey, or exhibit a combination of traits.

Julia Parrish, a University of Washington professor of aquatic and fishery sciences, said that the level of control Couzin and his colleagues had over prey behavior, and testing the predator's reaction to that behavior, sets their experiment apart from others based on real and simulated animal interactions. Parrish is familiar with the Princeton study, but had no role in it.

"The beauty of this experiment is that the researchers systematically vary the rules that the individual simulated prey play by, which dictates the structure of the resulting group," Parrish said. "They're like the little man behind the curtain moving three dials up and down — attraction, repulsion and alignment. Then they say, 'Okay, bluegills, give it your best shot. How good are you at attacking prey based on how we set the rules?'"

This approach resulted in a "significant first step" toward a metric that can quantify how individual behaviors influence the safety of the group during a predator attack, Parrish said.

"We don't know the rules prey use," Parrish said. "We can watch them, we can track them and infer what the rules are, but we don't actually know what they are. What this study did is bypass that messiness and make up the prey then see what a real predator does. That simplification is the innovation."

Once the simulation began the individual prey would swim and form groups spontaneously. Each trial consisted of 16 prey and one bluegill predator. Only the first attack by each bluegill was recorded. A new bluegill was put in the tank after the researchers restarted the simulation and the prey began moving and interacting with each other.

"Effectively, the bluegills were playing an immersive video game in which they hunted," Couzin said.

"By evolving the prey groupings, the game becomes harder and harder for the predators, as when a video game adapts to the strategy employed by the players," he said. "In a similar way, our prey 'evolved' to the mode of hunting that the bluegills exhibited, adapting better strategies that allowed them to evade hunting more effectively."

Naturally, the researchers found that simulated prey that formed groups "survived" better than those that swam alone. But individuals in groups also needed to strike a balance of closeness and coordinated movement to keep the bluegills at bay, the researchers reported.

Large groups that did not move much eventually fell victim to attacks in "high-risk" areas of the projected space in which bluegills preferentially attacked. Yet when groups of prey moved with coordination, they passed through these high-risk areas too quickly for each individual bluegill to make its attack.

Although the project used bluegills, Parrish said, the catalog of formation possibilities the researchers developed leave room to understand how individual behavior and movement influences other predators such as tuna, which target large groups.

"We could systematically go through all the combinations this study presents and see what a predator actually responds to," Parrish said.

A video of the simulation with a description of the project by Ioannou is available on YouTube.