For social animals such as schooling fish, the loss of their numbers to human activity could eventually threaten entire populations, according to a finding that such animals rely heavily on grouping to effectively navigate their environment.

Princeton University researchers report in the journal Science that collective intelligence is vital to certain animals' ability to evaluate and respond to their environment. Conducted on fish, the research demonstrated that small groups and individuals become disoriented in complex, changing environments. However, as group size is increased, the fish suddenly became highly responsive to their surroundings.

These results should prompt a close examination of how endangered group or herd animals are preserved and managed, said senior researcher Iain Couzin, a Princeton professor of ecology and evolutionary biology. If wild animals depend on collective intelligence for migration, breeding and locating essential resources, they could be imperiled by any activity that diminishes or divides the group, such as overhunting and habitat loss, he explained. 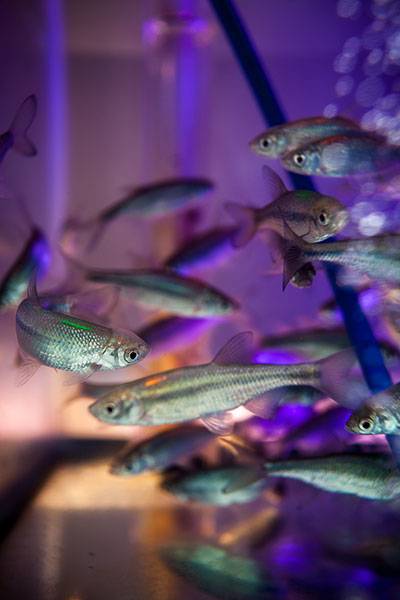 Princeton University researchers found that collective intelligence is vital to certain animals' ability to evaluate and respond to their environment. Conducted on golden shiners (above), the research demonstrated that social animals such as schooling fish rely heavily on grouping to effectively navigate their environment. (Photo by Sean Fogarty)

"Processes that increase group fragmentation or reduce population density may initially appear to have little influence, yet a further reduction in group size may suddenly and dramatically impact the capacity of a species to respond effectively to their environment," Couzin said. "If the mechanism we observed is found to be widespread, then we need to be aware of tipping points that could result in the sudden collapse of migratory species."

The work is among the first to experimentally explain the extent to which collective intelligence improves awareness of complex environments, the researchers write. Collective intelligence is an established advantage of groups, including humans. As it's understood, a group of individuals gain an advantage by pooling imperfect estimates with those around them, which more or less "averages" single experiences into surprisingly accurate common knowledge. For instance, the paper in Science cites a 1907 study that predicted with near precision the weight of an ox based on the estimates of 787 people.

With their work, Couzin and his coauthors uncovered an additional layer to understanding collective intelligence. The conventional view assumes that individual group members have some level of knowledge albeit incomplete. Yet the Princeton researchers found that in some cases individuals have no ability to estimate how a problem needs to be solved, while the group as a whole can find a solution through their social interactions. Moreover, they found that the more numerous the neighbors, the richer the individual — and thus group — knowledge is.

These findings correlate with recent research showing that collective intelligence — even in humans — can rely less on the intelligence of each group member than on the effectiveness of their communal interaction, Couzin said. In humans, research suggests that such cooperation would take the form of open and equal communication among individuals regardless of their respective smarts, he said.

The researchers placed fish known as golden shiners in experimental tanks in groups as low as one and as high as 256. The tanks featured a moving light field that was bright on the outer edges and tapered into a dark center. To reflect the changing nature of natural environments, they also incorporated small patches of darkness that moved around randomly. Prolific schoolers and enthusiasts of darkness, the golden shiners would pursue the shaded areas as the researchers recorded their movement using computer vision software. Although the fish sought the shade regardless of group size, their capability to do so increased dramatically once groups spanned a large enough area.

The researchers then tracked the motion of individual fish to gauge the role of social influence on their movement. They found that individuals adjusted their speed according to local light level by moving faster in more brightly lit areas, but without social influence the fish did not necessarily turn toward the darker regions. Groups, however, readily swam to dark areas and were able to track those preferred regions as they moved.

This collective sensing emerged due to the coherent nature of social interactions, the authors report. As one side of the group slowed and turned toward the shaded area, the other members did as well. Also, slowing down increased density and resulted in darker regions becoming more attractive to these social animals.

Couzin worked with lead authors Andrew Berdahl, a Princeton graduate student, and postdoctoral fellow Colin Torney, both currently in Couzin's lab, as well as with former lab members Christos Ioannou and Jolyon Faria, who are now at the University of Bristol and the University of Oxford, respectively.

The paper, "Emergent sensing of complex environments by mobile animal groups," was published online Jan. 31 by Science. The work was supported in part by grants from the National Science Foundation, the U.S. Office of Naval Research, the U.S. Army Research Office and the Natural Sciences and Engineering Research Council of Canada.