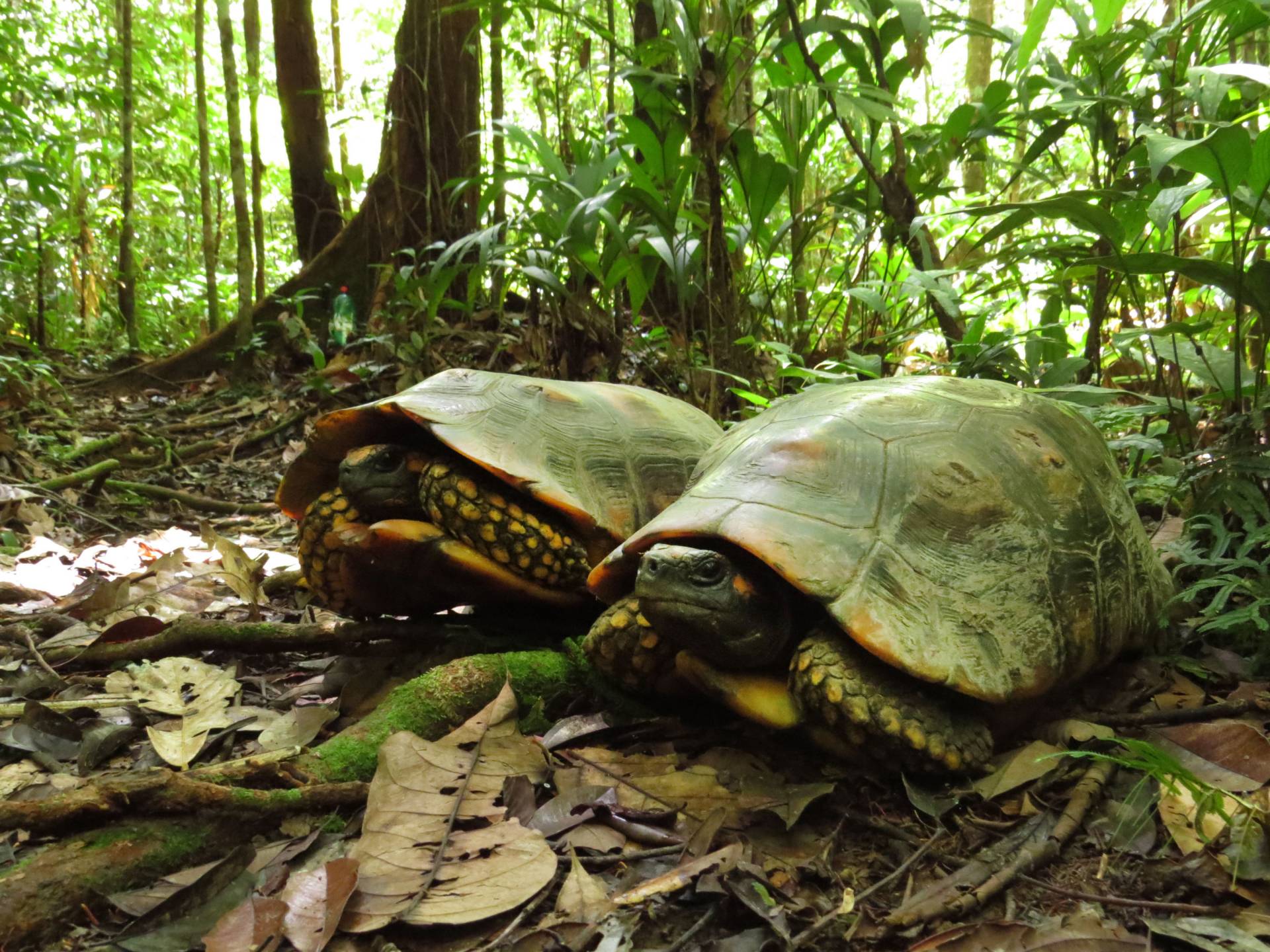 Researchers from Princeton and other universities studied the consumption of imperiled tortoises and freshwater turtles in Brazil, as they are among the top five most consumed and traded species in urban areas in the Amazon. The yellow-footed tortoise (Chelonoidis denticulatus) seen here, also known as the Brazilian giant tortoise, can be found in the Amazon Basin of South America.

People around the world, especially in developing countries in Africa, Asia and South America, consume wild game, or bushmeat, whether out of necessity, as a matter of taste preference, or, in the case of particularly desirable wildlife species, to connote a certain social status. Bushmeat consumption, however, has devasted the populations of hundreds of wildlife species and been linked to the spread of zoological diseases such as the Ebola virus.

New Princeton University research finds that when people in developing countries move from rural areas to cities, they consume less bushmeat over time, perhaps because other sources of animal protein are more readily available. They also found that children in urban areas generally have less of a taste for wild game than their parents. In the long term, this could be good news for conservation.

The study, published in the journal Conservation Biology, is among the first to explore how the consumption of wildlife changes as countries become increasingly urbanized. The results have profound implications for the rapidly growing wildlife trade, which is a multi-billion-dollar industry that threatens human health, drives species extinction and damages ecosystems.

The researchers traveled to Brazil — one of many countries worldwide experiencing a dramatic migration from rural to urban areas — and interviewed thousands of adults and children about their wildlife consumption habits.

“In the Amazon, as in most developing countries, people are leaving rural areas and moving into cities. We find — for whatever reason — they are reducing their consumption of wild animals over time, providing a needed break for overhunted wildlife,” said study co-author David Wilcove, professor of ecology and evolutionary biology and public affairs and the High Meadows Environmental Institute.

“A decline in per capita consumption of wild animals by urban residents gives us hope that pressure on hunted species may decrease over time. At the same time, we don’t know whether this decline will be large enough to compensate for an increasing human population in urban areas,” said Willandia Chaves, the lead author of the study, who worked on the project as a postdoctoral researcher at Princeton and is now an assistant professor in the Department of Fish and Wildlife Conservation at Virginia Tech. 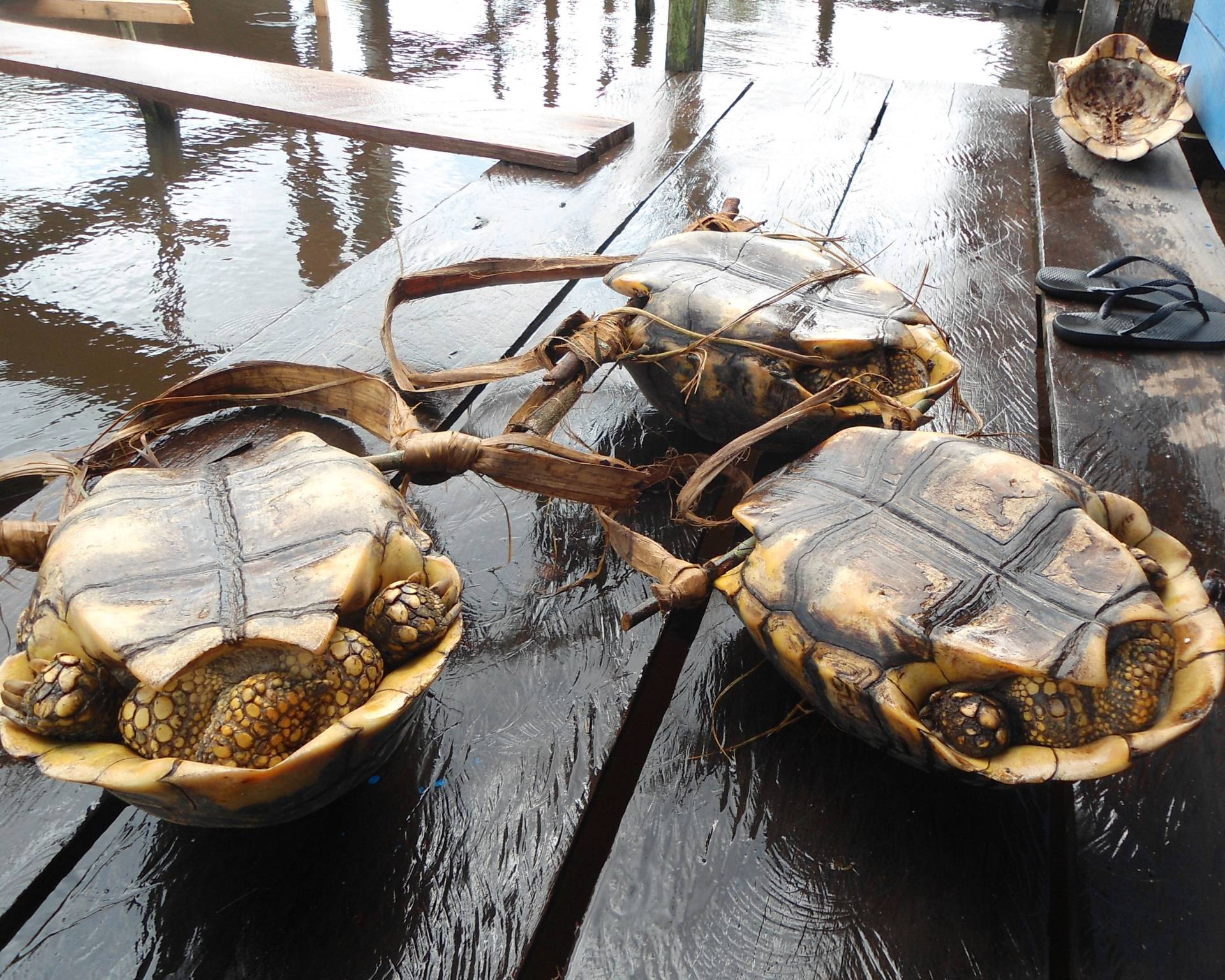 These yellow-footed tortoises have been captured for human consumption.

Wilcove and Chaves conducted the study with Denis Valle of the University of Florida, Aline S. Tavares of the Universidade Federal do Amazonas and Thais Q. Morcatty of Oxford Brookes University.

The researchers surveyed six small towns, three large towns and Manaus, the largest city in the Amazon Basin. This included 1,356 households and 2,776 school-age children. They studied the consumption of imperiled tortoises and freshwater turtles, as they are among the top five most consumed and traded species in urban areas in the Amazon.

While subsistence hunting is permitted, most wildmeat consumption in Brazil is illegal.  Moreover, the turtle species that were being consumed where this study took place are highly endangered. For this reason, the researchers had to design a survey that would allow interviewees to honestly answer questions without implicating themselves.

To do this, they used dominoes. The head of each household (whether male or female) was asked a series of questions about their consumption of turtles (illegal) versus cornmeal (legal).

When asked, “Do you consume this item in your house?” respondents would randomly choose a domino from a bag: one dot represented cornmeal, and two dots for turtles. Because the researchers knew the ratio of one-dot to two-dot dominoes in the bag, they could calculate the consumption rates of turtles while protecting participants’ responses by not linking the behavior to an individual participant.

While the domino approach is not new, it has rarely been employed in conservation studies, making this study more cutting-edge. “It’s also exciting because it gives us much more reliable answers about sensitive activities than direct questioning does,” Wilcove said.

Next, the researchers randomly selected 49 middle and high schools (11 in Manaus, 13 in large towns and 25 in small towns) to study any generational differences in how much they liked and consumed bushmeat, compared to adults. At each school, they randomly selected four classrooms and asked the schoolchildren to complete an anonymous questionnaire, with parental consent. They surveyed 2,700 students in 146 classrooms, with schoolchildren from 11 to 18 years in age.

First, the researchers found people generally consumed fewer turtles in larger urban areas. This could be because turtles cost more in larger cities than in small towns, and law enforcement also is likely stronger in larger urban centers. In small towns, on the other hand, the rates of turtle consumption are much higher, perhaps because people living there have ready access to wilder areas where the turtles live or perhaps because enforcement of wildlife laws is lax.

Second, children in urban areas are generally less likely to consume turtles than their parents. Social eating norms could play a role. If other children say it’s “uncool” to eat turtles, then other kids might follow suit, or vice versa. Perhaps children consider the conservation implications of eating wildlife. Or perhaps it’s simply because children’s tastebuds haven’t been fully developed. The researchers said more studies are needed to understand children’s motivations.

“Is it a taste they will develop later in life, like children refusing to eat vegetables, or is it a lifelong switch?” Wilcove said. “We don’t know yet, but the answer will mean a lot to the future of wildlife in the Amazon.” 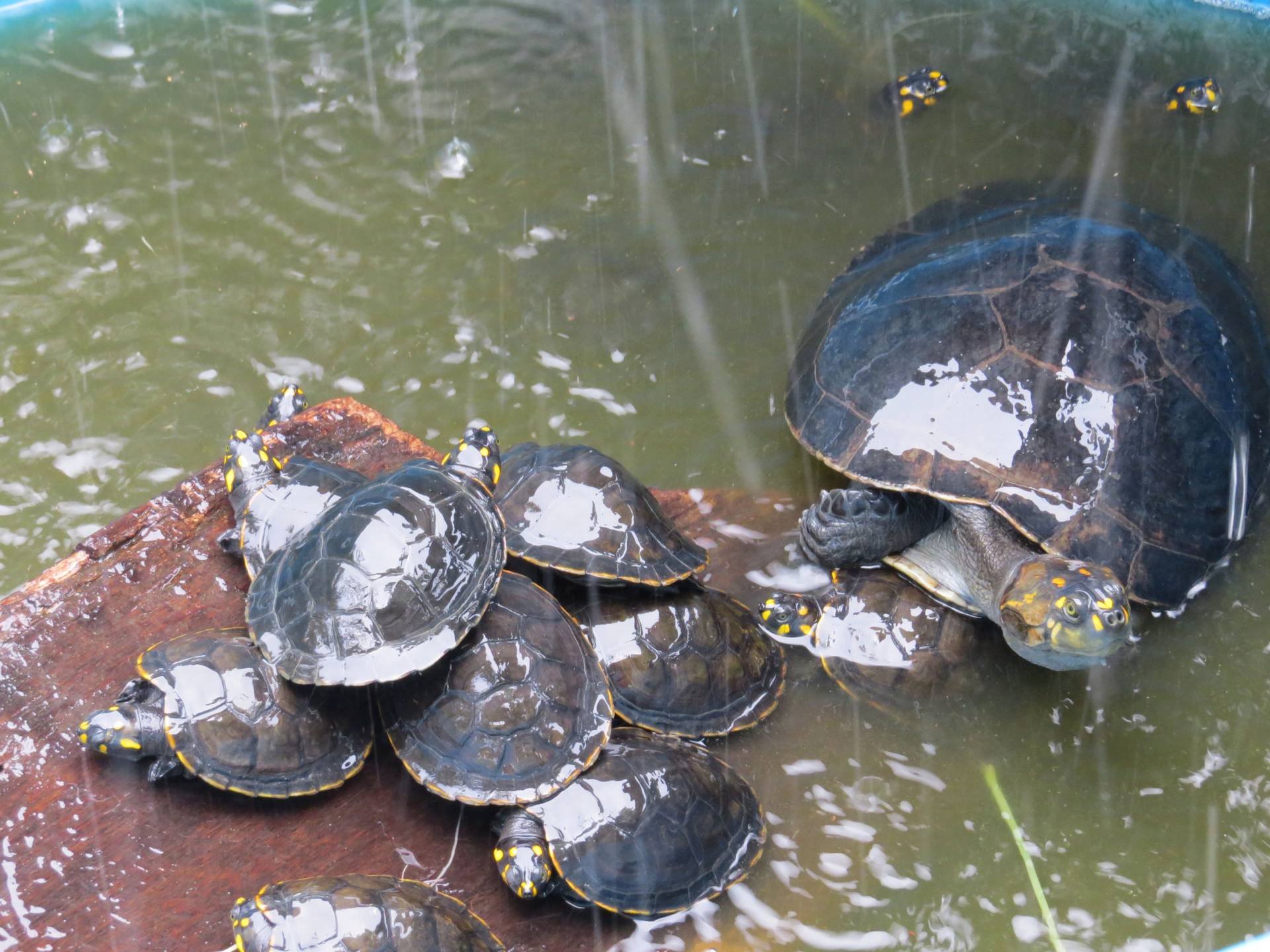 The yellow-spotted river turtle was the most consumed throughout the Brazilian regions surveyed by Princeton University researchers.

The researchers estimated that the overall consumption of endangered turtles in Amazonas State, the largest state in the Brazilian Amazon, is a very alarming 1.7 million turtles per year.  Therefore, programs aimed at reducing consumption of illegal wildlife are urgently needed.

Certain towns seem to be “hotspots” for bushmeat consumption, so conservation efforts in those areas could be particularly important. In addition, conservation education focused on schoolchildren, including increasing awareness regarding the plight of Amazonian turtles, could have long-term benefits if children forgo eating turtles as they become adults.

“Conservation efforts have focused on things like creating protected areas, working with rural communities to better manage wildlife and improving enforcement — all important actions. However, unless we also target urban demand for wildlife, we will not be able to effectively address this issue,” Chaves said.

“The bushmeat trade, both domestic and international, has emerged as a massive threat to biodiversity, comparable to habitat destruction for some places. Yet our knowledge of what drives this trade and how those drivers may change in the future is surprisingly weak. Until we better understand these issues, we are poorly equipped to solve this growing threat to wildlife,” Wilcove said.

The paper, “Impacts of rural to urban migration, urbanization, and generational change on consumption of wild animals in the Amazon,” by Willandia A. Chaves, Denis Valle, Aline S. Tavares, Thais Q. Morcatty and David S. Wilcove first appeared in Conservation Biology on Oct. 30, 2020 (https://doi.org/10.1111/cobi.13663). This research was funded by the High Meadows Foundation.