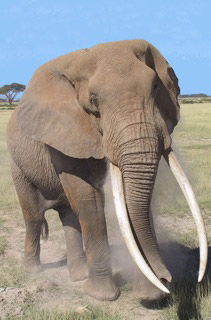 Male elephants of breeding age -- over 28 years old -- make up more than 5 percent of well-protected populations. Where populations have been over-exploited, this percentage declines to 1 percent or less. Males that resemble Amboseli National Park's "Tolstoy" are unlikely to live to pass on their genes for large tusks. (Photo: Joyce Poole)

The fate of many African elephants, according to a group of scientists, hinges on a decision to be made this week in Qatar by a host of countries operating under an international agreement.

The countries, part of the Convention on International Trade in Endangered Species (CITES), are gathering to decide, among other proposals, whether to grant requests to Tanzania and Zambia to lower the protection status of their elephants, allowing them to conduct one-time sales of stockpiled ivory.

Such sales, however, according to an international team of 27 scientists and conservationists writing in the March 12 edition of Science, could lead to the increased slaughter of elephants for their ivory throughout Africa. CITES is an international agreement between the governments of 175 member countries. Its goals center on ensuring that international trade in specimens of wild animals and plants does not threaten their survival. The two-week meeting began March 13 in Doha.

In the "Policy Forum" article, the scientists -- including two from Princeton University -- argue that the convention should reject requests to conduct the sales, which are supposed to be on ivory taken from dead animals or those culled under legal animal control efforts. In the past, such sales, they argue, have created a demand for ivory on the black market, where the substance fetches prices 10 times those obtained in legal auctions. This leads to poaching and threatens to reverse the recovery of African elephants observed since the ban on international ivory trade was put in place two decades ago.

"CITES has a tendency to be swayed by proposals suggesting that large species such as elephants can be exploited sustainably and the profits set aside to provide funds for future conservation when there is no evidence that these have ever worked other than superficially in the short term," said Andrew Dobson, one of the article's authors and a professor of ecology and evolutionary biology at Princeton. "In contrast, there is evidence that shows how rapidly these schemes lead to loss of the resource species and only short-term profitability to the few individuals who ran the scheme."

The scientists said Zambia and Tanzania are major sources and trafficking corridors for Africa's illegal ivory, demonstrated by tons of contraband ivory seized in 2002, 2006 and 2009. DNA sampling on the 2002 and 2006 seizures traced the majority of that ivory back to those two nations.

In the last 30 years African elephants have declined to about 35 percent of their original numbers, and their population today stands at less than 500,000.

"CITES must consider the precedent that will be set if these petitions are approved," said Katarzyna Nowak, a postdoctoral fellow at Princeton and an author of the article. "Such sales could have far-reaching implications on elephant populations and their habitats in not only Tanzania and Zambia but in those neighboring countries with shared elephant populations, as well as in central African states whose illegal ivory passes through Tanzania and Zambia on its way to Asian markets."

An international ban on ivory trade was enacted in 1989, and for nearly a decade, elephant poaching dropped dramatically and elephant populations recovered. However, in 1997, the first petitions to lessen the endangered protections for elephants to allow for occasional limited ivory sales were made. Both the occasional limited sales and also economic growth in China, Japan and Thailand renewed demand for ivory, which led to a sharp increase in poaching since 2000.

At present, the convention imposes two levels of protection for elephants. The strictest level, which currently applies to both Zambia and Tanzania, does not allow any sales of ivory. To be allowed limited trade, the countries are supposed to demonstrate that their elephant populations are secure, that law enforcement is effective in combating poaching and that the ivory sales will not be detrimental to elephants.

However, neither nation has met these criteria, according to the scientists. In addition, China and Japan, the only nations approved to import ivory, are among the largest consumers of illegal ivory and have done little to ensure the ivory they sell was obtained legally. That means they also have not met the convention's standards for taking part in legal ivory trade.

"We're making decisions that have a huge impact on the world's ecosystems, and we're not relying on the best available science," said Samuel Wasser of the University of Washington, the article's lead author. "This is a problem with the convention's decisions in general, even the potential long-term impacts of those decisions are immense."