Ecologists have evidence that some endangered primates and large cats faced with relentless human encroachment will seek sanctuary in the sultry thickets of mangrove and peat swamp forests. These harsh coastal biomes are characterized by thick vegetation — particularly clusters of salt-loving mangrove trees — and poor soil in the form of highly acidic peat, which is the waterlogged remains of partially decomposed leaves and wood. As such, swamp forests are among the few areas in many African and Asian countries that humans are relatively less interested in exploiting (though that is changing).

Yet conservationists have been slow to consider these tropical hideaways when keeping tabs on the distribution of threatened animals such as Sumatran orangutans and Javan leopards, according to a recent Princeton University study in the journal Folia Primatologica. To draw attention to peat and mangrove swamps as current — and possibly future — wildlife refuges, Katarzyna Nowak, a former postdoctoral researcher of ecology and evolutionary biology at Princeton, compiled a list of 60 primates and 20 felids (the large-cat family that includes tigers and leopards) known to divide their time between their natural forest habitats and some 47 swamp forests in Africa and Asia. 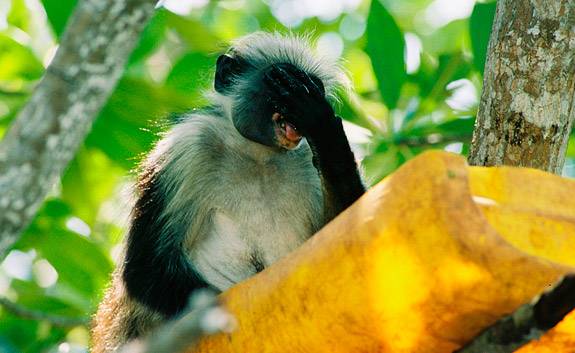 Princeton University research suggests that the presence of endangered cats and primates in swamp forests might be seriously overlooked. While a refuge, swamps have a lack of fresh water that makes life hard for animals such as the endangered Zanzibar red colobus monkey, pictured here drinking from a container of fresh water provided by locals. (Photo by Katarzyna Nowak)

But the presence of endangered cats and primates in swamp forests might be seriously overlooked, Nowak found. About 55 percent of Old World monkeys — primates such as baboons and macaques that are native to Africa and Asia — take to the swamps either regularly, seasonally or as needed. In 2008, the Wildlife Conservation Society reported that the inaccessible Lake Télé swamp forest in the Republic of the Congo was home to 125,000 lowland gorillas — more than were thought to exist in the wild. Among big cats, the Bengal tiger, for instance, holds its sole ground in Bangladesh in the Sundarbans, the world's largest mangrove forest.

The research compiled 21 swamp forests in Africa (left) and 26 in Asia where primates and felids (a large cat family that includes tigers and leopards) are known to seek refuge from human encroachment. The colored dots indicate the overall "threat score," or vulnerability, of species living in a particular site. Purple denotes a site with high species diversity, and where some resident primates and felids are likely listed as a conservation concern on the Red List of the International Union for Conservation of Nature. (Image by Katarzyna Nowak)

Life in the swamps can still be harsh for some animals. Species such as the crab-eating macaque and fishing cat can adapt somewhat readily to a life of swimming and foraging for crustaceans. Meanwhile, Zanzibar's red colobus monkey — driven to coastal mangroves by deforestation — can struggle to find the freshwater it needs, as Nowak reported in the American Journal of Primatology in 2008. Such a trend could result in local extinction of the red colobus nonetheless, she said.

Nowak concludes that swamp forests beg further exploration as places where endangered species such as lowland gorillas and flat-headed cats have preserved their numbers — and where humans could potentially preserve them into the future. 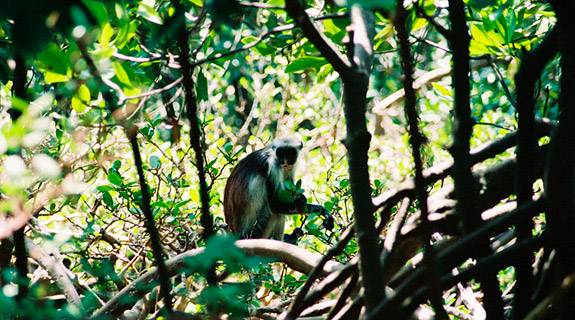