A $10 million gift from two Princeton alumni will establish the Sharmin and Bijan Mossavar-Rahmani Center for Iran and Persian Gulf Studies at the University.

The couple, of New York City, grew up and completed their high school education in Iran before coming to, and eventually settling in, the United States. Each majored in economics at Princeton and earned a certificate in the Program in Near Eastern Studies. 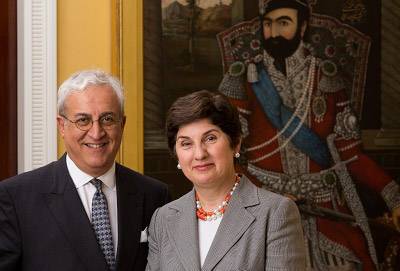 Princeton alumni Bijan and Sharmin Mossavar-Rahmani have created a center for Iran and Persian Gulf studies with a $10 million gift to the University. (Photo by Steve Freeman)

"Princeton and Iran go back more than a century," said Bijan Mossavar-Rahmani, an oil and gas executive who serves concurrently as chairman and chief executive officer of RAK Petroleum in the United Arab Emirates and executive chairman of Norway's DNO International. "Howard C. Baskerville, Class of 1907, went to Iran as an English teacher and died fighting alongside his students in a short-lived quest for constitutional democracy. He is still revered by Iranians who remember also the Princeton connection — a connection that drew me to this University more than 40 years ago."

Sharmin Mossavar-Rahmani, chief investment officer of the Private Wealth Management Group at Goldman Sachs, added: "Baskerville is reported to have said that 'the only difference between me and these people is my place of birth, and this is not a big difference.' We hope that through its mission of scholarship and teaching, this center will build on the legacy of Baskerville and that of so many other Princetonians in bringing people and places closer together."

The center's scholars and students will explore a broad range of topics, including issues in which Iran and the Persian Gulf states play a pivotal role, such as regional and international security, oil and energy markets, and trade and global finance. Faculty members and visiting scholars will conduct research and teach courses that address the history, politics, economics and culture of the region, from ancient Persia to the modern states that border the Persian Gulf.

"We are very grateful to Sharmin and Bijan for making this center possible," said Princeton President Shirley M. Tilghman. "Both as a university and as a nation, it is essential that we cultivate a fuller understanding of Iran and the other countries of the Persian Gulf, given their rich culture, geopolitical importance, and the troubled history of American-Iranian relations. As technology binds the world more closely together, we must develop the intellectual tools to match this new proximity and to foster in our students a cosmopolitan perspective. The Mossavar-Rahmani Center for Iran and Persian Gulf Studies promises to make a significant contribution to this process."

Sharmin Mossavar-Rahmani joined Goldman Sachs as a partner in 1993. She previously worked at Fidelity Management Trust Co., where she was chief investment officer for all separate and co-mingled fixed income accounts. She is member of the board of trustees and the investment committee of New York-Presbyterian Hospital, the board of trustees and the investment committee of Trinity School in New York City, and the national advisory board of the Merage Foundation for the American Dream. She has published books on bond indexing and on OPEC natural gas, as well as numerous articles on portfolio management issues. She earned an M.S. from Stanford University. She is a former member of the advisory council for Princeton's Bendheim Center for Finance.

Bijan Mossavar-Rahmani started his oil and gas career as founder and president of Houston-based Apache International, Inc. A former delegate to OPEC Ministerial Conferences, he served as the assistant director for international energy studies at Harvard University's Energy and Environmental Policy Center, where he wrote numerous books and articles on global energy markets. He has been decorated as a Commandeur de l'Ordre National de la Côte d'Ivoire for services to the energy sector of that West African nation. He was honored in December 2011 as the outstanding industry leader of the year by Middle East Oil & Gas magazine. He also is a member of the board of trustees of New York's Metropolitan Museum of Art and a member of Harvard University's John F. Kennedy School of Government visiting committee. He holds an MPA from the Kennedy School.

The couple's gift is part of Aspire, the University's five-year fundraising campaign that concluded on June 30 after raising $1.88 billion.

The Mossavar-Rahmani Center is expected to create and support connections to departments throughout the University, building upon the foundation of the Pahlavi Fund established at Princeton in 1969 to promote understanding of Iranian society and culture. It is intended to be a hub of scholarly activity for a group of affiliated faculty members from a wide variety of University departments and programs.

The center also will serve as a point of outreach for the University, recruiting visiting scholars from many disciplines and supporting Iranian-American students as well as students from Iran and the Persian Gulf. It will sponsor conferences, lectures and concerts, and offer grants for faculty and student travel and study abroad. The center will be managed by a director who is a tenured professor of the University.