In addition to the winners of the President's Achievement Award and Donald Griffin '23 Management Award, a total of 417 University staff members with a collective 7,980 years of service were honored for their dedication March 19 at the annual Service Recognition Luncheon. They included:

• 2 employees with 50 years of service

• 4 employees with 45 years of service

All employees received certificates of recognition embossed with a special copper-engraved rendering of Nassau Hall by Michael Graves, the Robert Schirmer Professor of Architecture Emeritus. Those with 25 years of service received a chair bearing an engraved University seal. Those with 30, 35, 40, 45 and 50 years of service selected from various gifts including jewelry, luggage and clocks bearing the design of the University shield.

The award was established in 1997 to recognize members of the support and administrative staffs with five or more years of service whose dedication, excellent work and special efforts have contributed significantly to the success of their departments and the University. The winners receive a framed certificate and a $2,500 award and have their names inscribed on a plaque that is displayed in the Office of Human Resources.

In remarks at the luncheon, Princeton President Shirley M. Tilghman commended both the award winners and the long-serving staff members who were recognized at the event, praising their talent, dedication and commitment to excellence in their work at the University.

She described the staff as "the glue that holds this campus together and makes it possible for our faculty and students to excel. During my time in Nassau Hall, you have risen to every challenge, from Hurricane Sandy to the Great Recession to the H1N1 virus to the annual Reunions' invasion, demonstrating again and again that Princeton's staff is second to none." 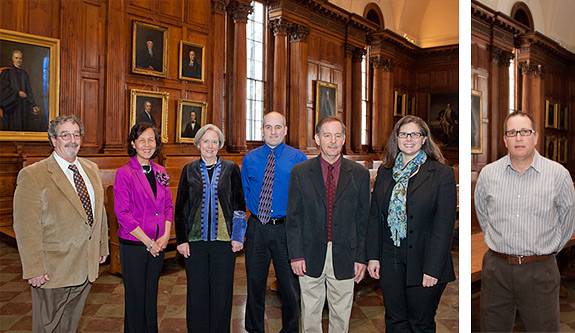 Bree joined the Princeton staff in 1974 in the Department of Psychology, and today he is a senior technical specialist. From the era of film projectors to the age of iPads, he has helped faculty members and students take full advantage of technology in both the classroom and the lab. As Lecturer in Psychology Ronald Comer wrote in his nomination: "Over the years, Paul has literally forced me (despite my kicking and screaming) to appreciate the unique pedagogical opportunities afforded by new developments in the world of technology. … He has consistently extended to me the highest degrees of patience, enthusiasm and teaching skill." His talents as a videographer have been widely praised, whether he is illustrating a behavior, documenting an experiment or capturing material — often on his own initiative — to enrich a lecture. Bree has assisted on tasks ranging from the design of a new departmental newsletter to planning the department's upcoming move to Peretsman-Scully Hall.

Cassaday has worked at the University since 2000, when he began as an office support staff member in the development office. He transferred to the Office of Human Resources and has been a data management support staff member since 2007. Cassaday is responsible for processing vast amounts of employee information, such as every new hire form, salary form and job form. Cassaday also agreed to oversee the Jobs at Princeton website and is now responsible for technical support and vendor relations. He has worked closely with the system's vendor, Human Resources' staffing team, the Office of the Dean of the Faculty, the Princeton Plasma Physics Laboratory's Office of Human Resources, hiring managers and job seekers, while navigating complex relationships, resolving problems, and earning the respect of his partners. Human Resources Information Systems Director Steve Blechman wrote: "One of Pete's greatest assets is that he is a continuous learner. When he takes on a new challenge, he does not seek to just replicate what had previously been done, he looks to make it better."

Huston came to Princeton in 1991 and joined the Department of Molecular Biology, where he is now the facilities manager. In that role, he has been a reliable presence when a problem surfaces, be it a broken pipe, malfunctioning equipment or an impending hurricane. Huston is routinely on call, and he carries with him an awareness of and dedication to the scientific work of the department. Lynn Enquist, professor and chair of the molecular biology department, wrote that Huston "is one step ahead in thinking about and dealing with old and new potential problems." According to his colleagues, his solutions are innovative, cost-effective and accomplished with a minimum of fuss, allowing those he helps to focus on their research or instructional activities.

Jeevaratnam joined the staff in the Budget Office in 2002 as a labor accounting and budget specialist. In 2006, she became the business manager in the Department of Politics. In assuming this position, which did not exist before, Jeevaratnam was tasked with applying order to the department's finances, creating new processes and controls, including a working budget. To quote professor and department chair Nolan McCarty, "Due in no small part to her hard work and professionalism, the politics department is easily one of the best managed units at Princeton." She has also made a point of helping others to understand and embrace the standards and practices she has put in place. The James Madison Program in American Ideals and Institutions is one of the affiliates that has been brought into the department's financial fold. Program director and professor Robert George said, "Frankly, I don't know how we got along without her before she joined the staff of the Department."

Pearson began at Princeton in the maintenance department in 1979. Today, he is the grounds operational manager in Facilities' Grounds and Building Maintenance, serving as one of the stewards of the campus while accommodating the varied needs of the University community, such as Reunions. As Mibs Mara of the Office of the Alumni Association observed, "Al really goes above and beyond. … He tackles mud and rain, and then brings the grass back to life after Reunions are over and the tents leave." Combining long experience with innovative thinking, Pearson has inspired improvements to everything from Class Day sightlines to the treatment of large tree limbs and stumps, which are now recycled, saving Princeton tens of thousands of dollars a year. During major storms, he sometimes sleeps in his office in order to mobilize his crews at the crack of dawn. Said Vice President for Facilities Michael McKay, "We are thankful to have such a dedicated and exceptional colleague."

Strickler joined the University's Office of Human Resources in 1996. In 2011, after working in the Office of Information Technology and the Office of the Executive Vice President, Strickler was promoted to her current role as the associate director for administration for the Andlinger Center for Energy and the Environment. She has played a critical role in building the center from the ground up. The center, said professor and center director Emily Carter, "would be nowhere near as far along without her as my partner. She is — bar none — the best administrative staff member I have ever worked with in 25 years of being an academic." Strickler also continues to share her insights with other members of our University community, from the Office of Sustainability to the treasurer's Finance Advisory Council. Said Treby Williams, assistant vice president for safety and administrative planning "Laura's investment of her time and talent in others' professional development and work is extraordinary."

In addition to the President's Achievement Award winners, two staff members were honored as recipients of the Donald Griffin '23 Management Award. They were Evangeline Kubu, associate director for communications outreach in the Office of Career Services, and Karen Sisti, college administrator at Rockefeller College.

The award was established to honor Griffin — a 1923 alumnus who served as the longtime secretary and general secretary of Princeton's Alumni Council — through a gift from his son James, a 1955 alumnus; his granddaughter, Barbara Griffin Cole, a 1982 alumna; and her husband, Chris Cole, a 1981 alumnus. The award was instituted by the Office of Human Resources to recognize administrators who would like to develop their leadership and management skills. The winners receive a grant of up to $2,500 to participate in professional activities scheduled within the next year to provide new insights and perspectives, renew motivation and/or enhance skills applicable to their current responsibilities.

Kubu has been working for the Office of Career Services since 2009. By winning the Griffin Award, Kubu will be able to attend the National Association of Colleges and Employers Management Leadership Institute this July in Arizona. She will be able to earn certification that is uniquely designed for members of her profession and develop her leadership abilities, master strategic planning skills, and learn how to navigate both financial and ethical challenges within her profession.

Sisti has been the college administrator at Rockefeller College since 2004. Through the Griffin Award, she attended the annual conference run by the Student Affairs Administrators in Higher Education Association in Florida, including several sessions pertaining to issues related to athletes. She hopes to use the insights from this conference to continue to strengthen the connection between student athletes and non-athletes in the residential college and the broader campus community.