In addition to the winners of the President's Achievement Award and Donald Griffin '23 Management Award, a total of 342 University staff members with a collective 6,550 years of service were honored for their dedication March 24 at the annual Service Recognition Luncheon.

• 1 employee with 45 years of service

• 8 employees with 40 years of service

All employees received certificates of recognition embossed with a special copper-engraved rendering of Nassau Hall by Michael Graves, the Robert Schirmer Professor of Architecture Emeritus. Those with 25 years received a chair bearing an engraved University seal. Those with 30, 35, 40 and 45 years selected from various gifts including jewelry, luggage and clocks bearing the design of the University shield.

Those honored as recipients of the President's Achievement Award were: Cass Garner, department manager in the Council of the Humanities and the Society of Fellows in the Liberal Arts; Christopher Gorzelnik, production supervisor in Alexander Hall for the Special Facilities Group in the Department of Grounds and Building Maintenance; Cynthia Keith, mechanical quality assurance coordinator in the Department of Grounds and Building Maintenance; Eric Paul, departmental computing support specialist in the Department of Chemical Engineering; and Evelyne Roach, manager of distributed computing support in Office of Information Technology (OIT) Support Services.

The award was established in 1997 to recognize members of the support and administrative staffs with five or more years of service whose dedication, excellent work and special efforts have contributed significantly to the success of their departments and the University. The winners receive a framed certificate and a $2,000 award and have their names inscribed on a plaque that is displayed in the Office of Human Resources.

In remarks at the luncheon, President Shirley M. Tilghman commended both the award winners and the long-serving staff members who were recognized at the event, praising their talent, dedication and commitment to excellence in their work at the University. 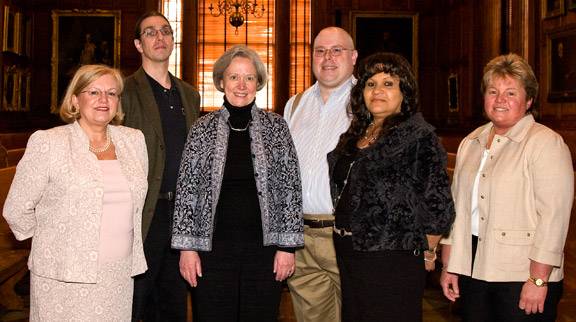 Garner joined the Princeton staff in 1990 in the Department of Comparative Literature and has worked in the Council of the Humanities since 1996. Currently, Garner manages the Council of the Humanities and the Society of Fellows as well as the historic Joseph Henry House. She is an active member of the Academic Managers Group. In his nomination, Gideon Rosen, the Stuart Professor of Philosophy and chair of the Council of the Humanities, wrote, "The broader community has benefited from Cass Garner without necessarily realizing it. If you attended the memorable lectures by Meryl Streep, Ian McEwan, Alan Bennett or dozens of others, Cass was the magic presence who made them all go smoothly." Rosen added that Garner cheerfully helps students, staff, faculty, and visiting faculty and fellows. Scott Burnham, the Scheide Professor of Music History and acting director of the Society of Fellows, noted, "Alongside the extraordinary level of commitment to her job this year, Cass' contributions to the life of the University outside of the Henry House are both legion and legendary. … We would all welcome the opportunity she so richly deserves to celebrate publicly her unusual contributions to this university."

Gorzelnik joined the University in 1999 as a staff member in the Special Facilities Group in Alexander Hall for the Department of Grounds and Building Maintenance. He now supervises that team, which is responsible for the technical execution of the events, theatrical performances and concerts held at Richardson Auditorium in Alexander Hall and Taplin Auditorium in Fine Hall, and offers guidance and support to Hamilton Theater in Murray-Dodge Hall and the residential college theaters. Gorzelnik was described as "a mentor, counselor and friend to the students" by Delia Vayansky, associate director of Richardson Auditorium. The students of the class of 2008 made him an honorary member "for his unwavering dedication and sustained commitment to the performing arts at Princeton University." Charles Krank, assistant director of grounds and building maintenance, noted, "His creativity and innovation are highly praised by professional musicians, music department professors and most of all by the students whose theatrical endeavors he oversees." Krank added, "Christopher Gorzelnik has set an extraordinary high standard of support for faculty, staff, students and the Princeton community."

Keith has been at Princeton since 1992, working in grounds and building maintenance. Hired as a plumber and now serving as mechanical quality assurance coordinator, Keith oversees quality assurance on capital projects and ensures that maintenance activities conform to applicable building codes and other state and municipal regulations. Keith has served the University as a master plumber; attained official certifications in heating, ventilation and air conditioning, plumbing inspection and plumbing subcode; and completed the Excelling at Princeton program. In his nomination, Joseph Morgan, associate director of operations in grounds and building maintenance, wrote, "Cindy's contributions to the University skyrocketed. She quickly was able to utilize her superior communication and technical skills to become a sought-out resource by project managers, engineers and her grounds and building maintenance colleagues." Patricia Devine, architectural engineer in the Office of Design and Construction, added, "She is a great team player with both the University staff as well as outside design consultants, helping to advance projects. With her help we've been able to keep up with emerging technologies and produce ever-more efficient buildings."

Paul joined the staff in the Department of Chemical Engineering in 2001 and completed his master's degree in chemical engineering in 2003. As a departmental computing support specialist, he is a member of the Office of Information Technology's Support for Computing in Academic Departments (SCAD) program, providing support for his department and the School of Engineering and Applied Science. In his nomination, Richard Register, professor of chemical engineering and department chair, wrote, "Once Eric is involved with a team, he gives it his best work, even though other teams, unknown to each other, are also receiving his best work." Ioannis Kevrekidis, the Pomeroy and Betty Perry Smith Professor in Engineering, noted, "Eric will put in the extra hours and extra effort to make sure that our problems are resolved and our work can go on. His responsiveness and availability -- frequently beyond normal working hours -- make Eric a truly worthy candidate for the award. Simply put, he enables us to do better science."

Roach has been a Princeton staff member since 1992 in OIT. In her current role, she oversees two of the programs she created: the SCAD program, with more than 150 SCAD/Department Computing Support (DCS) members; and the OIT Ambassador program, with 50 OIT staff ambassadors serving 83 University departments, offices and programs. Betty Leydon, vice president for information technology and chief information officer, wrote, "Evelyne serves as the 'face' of OIT to academic and administrative units, and the 'voice' of these offices to OIT. She does whatever it takes to provide needed IT support and resolve IT problems, and she always finds the time to take a personal interest in the people with whom she works." Leydon stated, "Evelyne Roach is a true Princeton success story." Theodore Christie, a past President's Achievement Award recipient and maintenance supervisor for the Frist Campus Center, wrote, "Regardless of whose job it is, she takes each challenge as her own responsibility and follows through until it is resolved. … She inspires everyone around her with her dedication and caring."

In addition to the President's Achievement Award winners, two staff members were honored as recipients of the Donald Griffin '23 Management Award. They were: Kirsten Arentzen, undergraduate administrator and seminar coordinator in the Department of Chemistry, and Jorge Escobar, manager of planning and operations in the Office of Development.

The award was established to honor Griffin — a 1923 alumnus who served as the longtime secretary and general secretary of Princeton's Alumni Council — through a gift from his son James, a 1955 alumnus; his granddaughter, Barbara Griffin Cole, a 1982 alumna; and her husband, Chris Cole, a 1981 alumnus. The award was instituted by the Office of Human Resources to recognize administrators who would like to develop their leadership and management skills. The winners receive a grant of up to $2,500 to participate in professional activities scheduled within the next year to provide new insights and perspectives, renew motivation and/or enhance skills applicable to their current responsibilities.

Arentzen joined the Department of Chemistry in 1996. To further her knowledge of student affairs issues such as social justice, health and student development theory, she attended the 2010 NASPA Conference for student affairs administrators in higher education.

Escobar was hired in the Office of Development in 2005. He will use the award to enhance his leadership skills by participating in the Looking Glass Experience workshop offered by the Center for Creative Leadership in May.