In addition to the winners of the President's Achievement Award and Donald Griffin '23 Management Award, a total of 388 University staff members with a collective 7,150 years of service were honored for their dedication March 27 at the annual Service Recognition Luncheon. They included:

• 1 employee with 55 years of service

• 2 employees with 45 years of service

• 9 employees with 40 years of service

All employees received certificates of recognition embossed with a special copper-engraved rendering of Nassau Hall by Michael Graves, the Robert Schirmer Professor of Architecture Emeritus. Those with 25 years of service had the option to receive a chair bearing an engraved University seal or a gift from the Princeton recognition collection. Those with 30, 35, 40, 45 and 55 years of service selected from various gifts in the Princeton recognition collection.

Those honored as recipients of the President's Achievement Award were: Robert Cutler, Princeton Plasma Physics Laboratory; Vicky Glosson, Office of the Dean of the College; Kim Mezsaros, Department of Athletics; Jeanne Mrak, Office of Information Technology; and Patricia Pokrocos, Office of Human Resources.

The award was established in 1997 to recognize members of the support and administrative staffs with five or more years of service whose dedication, excellent work and special efforts have contributed significantly to the success of their departments and the University. The winners receive a framed certificate and a $2,500 award and have their names inscribed on a plaque that is displayed in the Office of Human Resources.

In remarks at the luncheon, Princeton President Christopher L. Eisgruber commended both the award winners and the long-serving staff members who were recognized at the event, praising their talent, dedication and commitment to excellence in their work at the University. What follows are excerpts from Eisgruber's remarks.

Cutler has served as technical associate in the Princeton Plasma Physics Laboratory for 33 years, demonstrating mechanical design expertise and creativity in supporting cutting-edge fusion energy research. In the 1980s and '90s, he was responsible for building, installing and maintaining large diagnostics for the Tokamak Fusion Test Reactor. One of his major triumphs was the development of critical diagnostics — specifically, four remote-controlled millimeter-wave parabolic mirror antennas — using dentist drill motors, a compressed air system and other tools. Cutler's solution cost less than $150,000 — a stunning achievement for a project once estimated to cost $1.2 million. Philip Efthimion, head of the lab's plasma science and technology department, noted in his nomination: "Many times a scientific capability would not have been achieved because of the expense and difficulty if it were not for Robert's efforts." Cutler is also known as a mentor to graduate students and staff members. Clayton Myers, a graduate student who works on the Magnetic Reconnection Experiment, said: "The MRX experiment would not have achieved and maintained the level of excellence it has were it not for the innovative thinking and technical efficiency that Bob brings to the project." 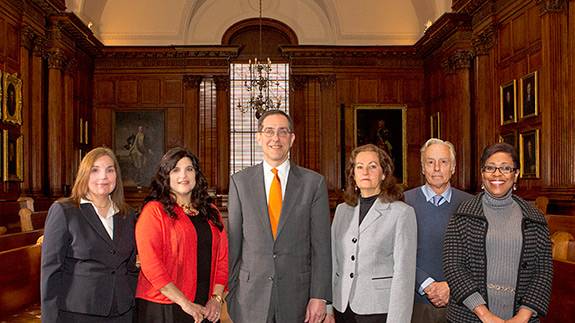 Glosson is program coordinator for the undergraduate curriculum in the Office of the Dean of the College (ODOC), who works with staff and faculty across the University's academic departments and programs. "Supportive, collaborative, innovative: That is Vicky to the core," noted Dean of the College Valerie Smith and Deputy Dean Clayton Marsh. "Princeton's academic units have come to see Vicky as the 'go-to' person in ODOC for reliable guidance and quick answers," they stated in their nomination. In their words, she is a "lifesaver," a "whiz" [and] a "superwoman" who can tackle problems on the fly and "make the complicated seem possible." Glosson has served Princeton for 21 years, including the past seven in the dean's office, after working in the Woodrow Wilson School of Public and International Affairs, the psychology and history departments, and the Hellenic studies program. This broad base of campus experience has helped Glosson thrive in her current role, in which she manages the Course Information Systems and oversees processes for new or modified course proposals — painstaking work that involves handling more than 1,000 proposals each year. Glosson also modernized and streamlined the administration of undergraduate academic prizes. Noelina Hall, undergraduate program manager in economics, noted of that effort: "What used to be a cumbersome process involving numerous forms and several sweaty trips to West College is now just a simple electronic process with the click of a 'submit' button."

Mezsaros, a Princeton staff member for 18 years, has served since 2000 as executive assistant to Director of Athletics Gary Walters. "When asked to describe our department culture, most staff and coaches will use the words 'dedication,' 'excellence,' 'support' and 'family,'" observed Walters. It should be no surprise then to hear that these are also the first qualities that come to mind when describing Kim." As the human resources representative for athletics, a department with 145 coaches and staff, Mezsaros guides departmental managers through their search processes and coordinates many searches herself. She created and maintains a comprehensive handbook for new hires — a resource with 150 pages of contacts, key documents and a guide to the department's core values. Football coach Bob Surace, a member of the Class of 1990, recalled Mezsaros' role in his transition back to campus four years ago. "Kim does not just leave a book on your desk and go back to the thousands of emails and calls that have flooded her inbox," he noted. "She will come down to the office for support, ask how you are doing, let [you] know nice places to take the family. … She is a truly terrific representative of Princeton University and our athletic department."

Mrak is a senior technology training and development specialist in the Office of Information Technology (OIT). She led the development of the Business Technology Certificate Program, which helps staff members strengthen their technology, communication and leadership skills. Mrak also offers customized training to departments and individuals across campus. In her 10 years at Princeton, she has given more than 1,000 training classes, ranging from advanced sessions for her colleagues in OIT to a basic-skills tutorial to show employees who don't use computers daily how to access their payroll information online. Vice President for Information Technology and Chief Information Officer Jay Dominick said: "Jeanne is one of those remarkable people at Princeton who has positively influenced the professional lives of countless members of our University community. … [She] demonstrates her innovation, creativity and teamwork in each of the classes and training programs she provides." Trisha Barney, center manager in the Wilson School and a member of the Business Technology Certificate Program steering committee, noted: "Jeanne is involved … and caring. ... It is because of these qualities that I have continued my own participation with the program. Her dedication and forward-thinking are an inspiration to me."

Pokrocos is manager of staffing in the Office of Human Resources where she has worked for more than 20 years. Pokrocos is known for her work ethic and understanding of the distinctive challenges faced by Princeton's hiring managers. In the past nine years alone, she has recruited and filled more than 1,150 positions. She also has helped improve hiring processes in several ways, including sharing best practices for interviewing and selecting candidates, and implementing new-hire background checks. Karen Haskin, director of academic management in the provost's office, said: "She is an extraordinary colleague who provides true partnership, expertise and dedication. Some of the searches we have conducted together were unusually complicated, but no matter the difficulties, Pat has been wisely level-headed and professional as she collaborated with me to identify the best candidates in the pool." When Janet Gruschow needed to fill numerous positions in a short time after becoming chemistry department manager, she said she found an ideal collaborator in Pokrocos. "I know I can rely on her to be honest (a critical quality in the hiring process), intuitive about people and to go beyond the call of duty to assist me to get the job done," Gruschow said. "What could be more valuable to Princeton than someone who knows how to hire the best of the best?"

In addition to the President's Achievement Award winners, two staff members were honored as recipients of the Donald Griffin '23 Management Award; Sal Rosario of the Office of Information Technology and Sue Winters of the University Center for Human Values. The award was established to honor Griffin — a 1923 alumnus who served as the longtime secretary and general secretary of Princeton's Alumni Council — through a gift from his son James, a 1955 alumnus; his granddaughter, Barbara Griffin Cole, a 1982 alumna; and her husband, Chris Cole, a 1981 alumnus. The award was instituted by the Office of Human Resources to recognize administrators who would like to develop their leadership and management skills. The winners receive a grant of up to $2,500 to participate in professional activities scheduled within the next year to provide new insights and perspectives, renew motivation and/or enhance skills applicable to their current responsibilities.

Rosario has worked in the Office of Information Technology since 2006 and is the manager for technology consulting services. In his nomination, his supervisor, Nadine Stern, associate information officer for operations and planning, wrote, "Sal continually strives to develop professionally … demonstrated through his active participation and contribution to numerous higher education and IT organizations." In 2009, Rosario was nominated by OIT senior staff and selected to be a fellow of the Frye Leadership Institute, which is designed for rising leaders in higher education who work collaboratively to promote and initiate change on critical academic issues. Rosario will use the Griffin Award to attend a two-day seminar on leadership and decision-making in July at Harvard University.

Winters has been on the staff of the University Center for Human Values since 2006 and serves as administrative assistant. Director Charles Beitz, the Edward S. Sanford Professor of Politics, described Sue in his nomination as a "touchstone" for people affiliated with the center, particularly its faculty and graduate students. Since coming to the center, Winters has routinized many activities and helped to instill new business processes and streamline workflow. The Griffin Award will enable Winters to attend a two-part program later this year at Bucks County Community College, where she will obtain a certificate in project management credentialed by the Project Management Institute.