In his song "Day of the Locusts," the cicadas that "sang off in the distance" as Bob Dylan accepted an honorary degree from Princeton University in 1970 will likely be a bit more distant this year.

Despite the fervor surrounding the cacophonous insect's emergence this year — in which thousands of adult cicadas will noisily arise to mate after a 17-year subterranean maturation period — Princeton's balmy days and nights should be relatively free of the winged onslaught, explained Henry Horn, a Princeton professor of ecology and evolutionary biology, emeritus. 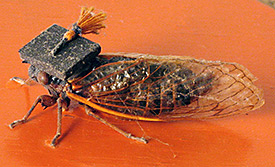 Despite the fervor surrounding the cicada emergence this year, Princeton should be relatively free of the insects because the 2013 variety, known as Brood II, typically concentrates in northern New Jersey with Princeton on its territorial outskirts, said Henry Horn, a Princeton professor of ecology and evolutionary biology, emeritus. Princeton is a prime breeding ground for Brood X, which will reemerge in 2021. Horn commemorated 1987's Brood X by adhering a mortarboard to one of the hundreds of cicadas that came out around the time of that year's Princeton Commencement. (Photo by Henry Horn)

The signature "high whining trill" Dylan referenced is the male mating call of the Magicicada, a North American species of periodical cicada that has a 13- or 17-year lifecycle. This cicada is divided into "broods," or a group of cicadas that emerge in a specific region at a regular interval.

What has been featured regularly in the news in recent months is Brood II, which in New Jersey is typically concentrated in the north with Princeton on its territorial outskirts, Horn said. Cicadas have "a tendency to be homebodies" and do not travel far beyond the region in which they emerge, he said.

Princeton is instead a prime breeding ground for Brood X, which will reemerge in 2021 (just as today's middle-school students ready for Commencement), Horn said. It was Brood X's 1970 incarnation that was the basis for Dylan's song. The prolonged drone of the last emergence, in 2004, can be heard in various online videos of Princeton Commencement speeches and daily life from that June. 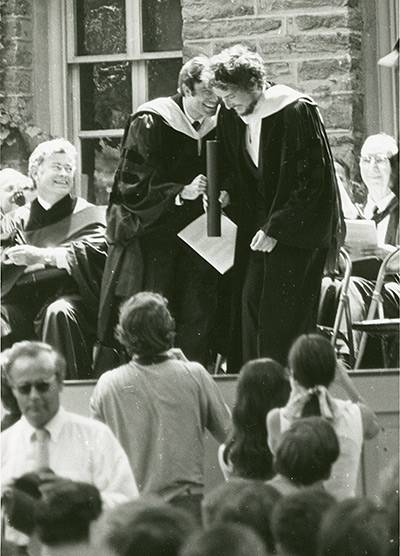 Bob Dylan, right, received an honorary degree from Princeton in 1970, an experience accompanied by the cacophony of Brood X, which was the basis for Dylan's song "Day of the Locusts." (Photo courtesy of Seeley G. Mudd Manuscript Library)

"The chances that the cicadas will come out in Princeton this year are very low because it's not the right brood," Horn said. "This particular brood is likely to emerge in the surrounding region, but it won't be prominent here. Certainly not anything like when Bob Dylan wrote his song."

Adult cicadas are alive for only a few weeks after a disproportionately long grub life spent underground gorging on nutritious tree water, Horn said. Periodical cicadas spend their youth — which for humans is roughly the time between birth and graduating middle or high school — moving further underground to feed on the thickest, juiciest tree roots.

As these nymphs approach adulthood, they burrow toward the surface to emerge more or less in unison once the soil temperature is more than 63 degrees Fahrenheit. In northern states such as New Jersey this occurs around early June. The nymphs then find a leaf on which to perch and undergo their transformation into winged adults.

The adult cicadas emerge from their juvenile exoskeletons with characteristic large wings and bulbous red eyes. They also are white for the first hour or so before taking on their customary dark green color. And so begins the final phases of the cicada's life, one spent hurriedly mating and laying eggs for the next generation. Males gather into "choruses" to amplify the drone — which collectively can reach 100 decibels, or as loud as a motorcycle — that wanting female cicadas find irresistible.

The presiding explanation for the insect's lengthy lifespan is that, well, any specialized predator that can wait several years before it eats again "would have to be really, really specialized," Horn said. The annual cicada that emerges every August can relate — it is the sole prey of the brutal cicada killer wasp, which paralyzes the unwitting cicada, lays an egg on it and leaves it for the wasp larva to chow on. Periodical cicadas such as Magicicada have no such foe, Horn said. But that does not mean the insect can rest assured. 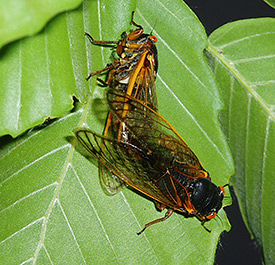 Cicadas reach adulthood after 17 years developing underground. This final, weeks-long phase of the insect's life is spent hurriedly mating and laying eggs for the next generation. The characteristic drone is the mating call of male cicadas, which gather into "choruses" that can reach 100 decibels, or as loud as a motorcycle. This photo shows Brood X cicadas mating during the 2004 emergence in Princeton. (Photo by Henry Horn)

"All the bug eaters will switch to them because they're numerous and tasty and a big package of protein, especially the females when they're filled with eggs," Horn said. "Even things that don't eat bugs might switch to them," he said, referring to the adventurous palate of some household pets.

While the innumerable cicadas might not whet most American appetites (cicadas are cooked and eaten in many countries), the emergence can be a sight to behold — and that is about all people in a cicada hot spot can do, Horn said. In 2004, Horn searched out hot spots of noise, known as chorus centers, using a tuned resonator — a little tube atop a microphone that singles out a particular sound frequency — that was sensitive to the dominant frequency of the cicada mating call.

Although cicadas are largely harmless to humans, Horn said, people should beware of falling twigs and branches — cicadas lay their eggs in slits cut into the soft wood — and the numerous dead cicadas that can promote mold growth.

"The best approach," Horn said, "is to enjoy the phenomenon and clean up afterwards."