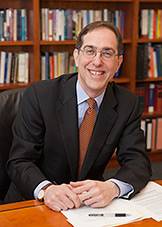 The changes present challenges and opportunities for Princeton and the sector as a whole, he said in a speech titled "The Changing Landscape of Higher Education: MOOCs, Money and the Future of Liberal Arts Education." Eisgruber, who will become president of the University July 1, delivered the Donald S. Bernstein '75 Lecture in Dodds Auditorium, Robertson Hall, to faculty, students and a large contingent of alumni on campus for Reunions.

He said the cost of higher education is driving much of the change. And although about a third of all college graduates nationally — and 75 percent of Princeton graduates — leave school with no debt, many families may be near the limit of how much they are able, or willing, to spend on a college education despite its long-term returns, he said.

"For that reason, all of us who care about higher education need to be looking for solutions that can enable colleges and universities to find more cost-effective ways to provide good quality education," Eisgruber said. "In many parts of higher education, traditional funding models are at a breaking point, and unless we can find new models, quality will slip."

That concern has helped fuel interest in online education, he said, including "Massive Open Online Courses" known as MOOCs. "The question whether or not technology can change the landscape of higher education in good ways rather than bad ones is going to come down to whether it can not only reduce cost — which it can do — but whether or not it can enhance quality and whether or not we as institutions, citizens and policymakers can shape technology in ways that enhance quality," Eisgruber said. "And in education, quality is all about creating and sustaining engagement."

He cited the experiences available to Princeton students as examples of such engagement.

"The senior thesis — that's about student engagement in learning, discovery and, in the best cases, a personal relationship with a faculty member," he said. "Precepts and now freshman seminars — those are about independent thinking and student-faculty contact. Residential life, from the chapel to the athletic fields to the eating clubs, is about engaging students with one another and with mentors in a myriad of ways that interlace with the academic work of the campus."

But engagement is expensive, he said, because it relies on students having frequent, close contact with faculty members — resulting in high labor costs.

"The key question about technology is whether or not it can increase or sustain the kind of contact or engagement that is essential for learning, rather than simply putting more distance between students and teachers," Eisgruber said.

Pursuing answers to such questions is part of the reason Princeton has begun offering a few courses free online through Coursera, he said, and much remains to be learned.

"This much is clear. This experiment has been a success [because] the faculty members participating in these Coursera courses have been energized by that opportunity to reimagine how they teach their classes," Eisgruber said.

The first — and most important to Princeton — is how to maximize engagement for all students. The second — focused on policy and higher education in general — is how to measure success and demonstrate the value of a student's education.

"We have plenty of evidence that engagement increases value," he said. "But in order to be able to talk about this in connection with the cost problem I described earlier we have to be able to talk about which forms of engagement are most cost-effective. That in turn requires us to be more explicit about what we are trying to achieve with various forms of education in this country, what cost-effective means for accomplishing specific goals, and what those goals ought to be. "

Regulators are struggling to adapt measures of educational quality to new forms of instruction, he said, which has contributed to misguided calls for standardized testing for college students.

In response, Eisgruber said, Princeton has been working with other colleges and universities to focus measurements on evidence of the student learning experience, student academic performance and post-graduation outcomes.

"Shaping the change won't be easy," Eisgruber said. "It will require us to become more articulate about the goals of higher education and more precise about how to measure progress toward those goals. It's going to require public leadership, including from universities like this one that are well-positioned to make the case for liberal arts education.

Eisgruber closed with a call for increased support for public universities, saying reductions in funding have put "a great system of universities at risk."

"We as a society depend for our future on the public universities that, along with Princeton and other private universities, will help us educate the next generation of leaders," he said. "I ask you to join me in recognizing that, in the decade to come, one of the most important things that we as Princetonians can do to be 'in the nation's service' is to continue not only to support our own University but to make the case for this country's public universities."